In light of the Australian Competition and Consumer Commission (ACCC) inquiry into rising electricity prices, some have turned their attention to the ownership of generation assets in the National Electricity Market (NEM).[i]

There has been a particular focus on the Queensland generation sector with its two state-owned generators, with Prime Minister Malcolm Turnbull talking of ‘gaming the system’[ii] and the government asking the Australian Energy Regulator (AER) to investigate. Meanwhile, the ACCC chairman Rod Sims stated that the market dominance of the two state-owned generators had pushed up prices in the state.[iii] This was disputed by the Queensland Government, which argued that the AER had already considered the issue and found that high price events were caused by high electricity demand, heat-related network and generation constraints, not bidding behaviour.

Claims and complaints of generators using market power to increase prices are not new.

The Major Energy Users proposed a rule change to the Australian Energy Market Commission (AEMC) in 2010 to restrict dispatch offers by generators in the NEM pointing to the possible exercise of market power in South Australia.[iv] In response to this, the AEMC did an extensive analysis on the NEM wholesale market. In 2013, the AEMC concluded that there was a lack of significant evidence of sustained market power when considering the NEM either as an entire market or as state based systems. Based on this assessment, no rule change was made.[v]

The concern in the generation space is if there are sufficient barriers to entry or that market participants hold substantial market power, they may be able to increase prices above a ‘workably competitive’ level.

In a competitive market, prices should, on average, fall between short run marginal costs (SRMC) and long run marginal costs (LRMC). SRMC captures the variable costs of producing electricity, such as fuel and operating costs, while the LRMC also takes into account fixed costs such as the construction of the generation asset in the first place. The logic is that if prices consistently fall below a generator’s SRMC, the generator would be unable to cover even their operating costs and so would exit the market. This tighter supply in theory will result in an increase in prices. Conversely, if prices rose above the LRMC of generators, this would then signal an opportunity for a new entrant to the market. This increased supply will then lower average prices.

In the AEMC rule change process brought about by the Major Energy Users, they noted that spot price volatility is an inherent and necessary feature of a market like the NEM with flexibility being essential to maintain the balance between supply and demand.

The AEMC focuses on the LRMC as a base price level in a workably competitive wholesale electricity market. It is important to note however, that in some years average prices are expected to be below this level and some years above. This is simply a reflection of supply and demand conditions. If supply is abundant, generators may be expected to bid below their LRMC to secure their bid while if supply is constrained they may bid above this level to ensure fixed costs are recovered over the lifetime of the asset. In a working market, this signals that new entry is viable noting that planning, permitting and building a large power station takes several years, prices can sustain above LRMC for some time. In practice, because there is significant first mover advantage associated with new entry, power companies plan and permit plant ahead of time so that they are ready to start building when they see a market opportunity.

The question of whether there is market power in the NEM is not simply answered. As the price of electricity is determined by many factors, a simple wholesale price analysis will not necessitate the answer.

It is therefore useful to take a look at who the owners of generation assets in the NEM are and also how this has changed over the last 10 years.

To analyse what ownership of generation assets looks like in the NEM over the past 10 years, we looked at baseload, peak and intermittent renewable generation separately. While these different types of generation compete against each other in the spot market, they play different roles in the contract market. Simply put, baseload generation (coal, plus some gas and hydro plant) will typically sell swaps to parties that want to ensure a stable price for a consistent amount of electricity supply. Peakers (e.g. gas turbines) will typically sell caps to parties who want to hedge against the risk of large price spikes on the spot market. Intermittent renewables such as wind and solar are not well placed to offer either swaps or caps, but can offer PPAS for energy plus renewable energy certificates (RECs) to retailers and other parties with a REC liability.

Figure 1: Baseload generation in the NEM. 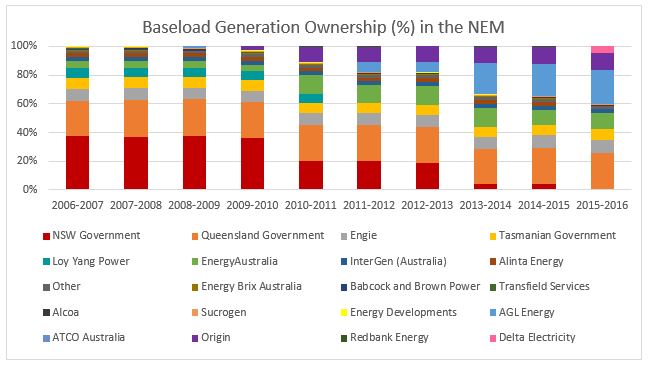 The largest noticeable change in the ownership of baseload generation has resulted from the privatisation of NSW government assets. From the 2010-2011 financial year NSW began selling its generation assets, which amounted to over 11,000MW in 2009-2010. These assets were gradually sold off with the last asset selling in the 2015-2016 financial year. These assets were acquired by five different companies: AGL, Origin, EnergyAustralia, Delta[vi] and Trustpower.

The ACCC opposed AGL’s purchase of Macquarie Generation assets, primarily the Bayswater and Liddell power stations.[vii] However, the Australian Competition Tribunal approved the purchase, determining that there would be “no substantial lessening of competition in the electricity wholesale and retail markets in NSW”[viii]. The ACCC cited that 37 per cent of NSW generation would be owned by one of the three retailers.

While AGL acquired most of the generation assets from state-owned Macquarie Generation, when you look at the ownership in the NEM, there are a number of competitors with similar amounts of market share. In looking at the change over the last 10 years, the concentration of ownership has not changed significantly but rather can be seen as a reorganisation of NSW government assets.

The Queensland Government still owns the state’s generation assets and represents a large proportion of ownership. As mentioned above, this has been a focus of recent comments.

Figure 2: Peak generation in the NEM 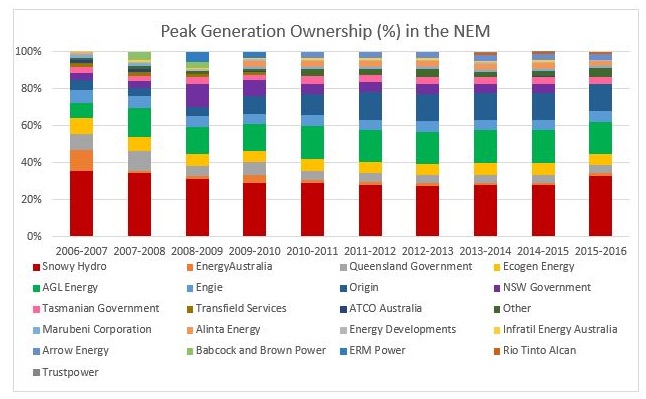 When looking at peak generation ownership in the NEM, the breakdown has been fairly consistent over the past 10 years. As hydroelectricity plant is classified as peak generation, Snowy Hydro owns the largest share of generation. This is then followed by AGL and Origin. There are a multitude of smaller players in the market, mostly owners of sugar mills. 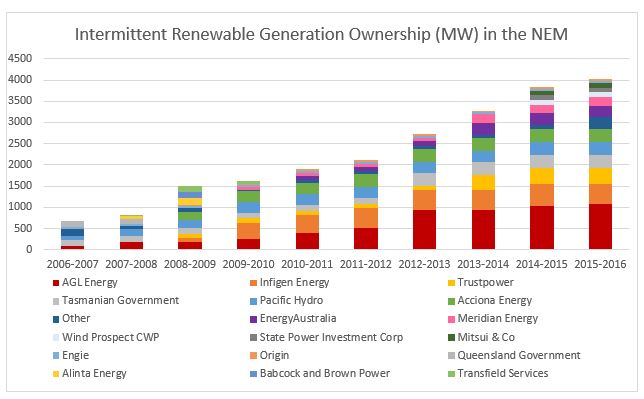 The ownership of renewable generation in the NEM has changed dramatically as renewable capacity has increased. It is encouraging to note that there are many players in the market and that new market entrants are coming in over time. It is also one area where government-owned businesses do not have a significant market share.

Is there a concentration of market power in the NEM?

From our analysis, it does not seem that there has been a concentration of market power in the generation sector in the past 10 years. It could be argued that the privatisation of NSW generation assets has in fact increased competition by adding diluting the market share the government held. We are now seeing accusations of price gouging in the Queensland market, of which 65 per cent is owned by the state government.

We will have to await the completion of the ACCC’s review of retail electricity prices, which will also consider “all wholesale market price, cost and conduct issues relevant to the inquiry”, to see what it finds. The most substantial barrier to new supply at present remains the lack of stable, national climate policy.

[vi] Delta was the name of one of the NSW government entities, but is now a privately owned business, previously known as Sunset Power International. They acquired the rights to use the business name Delta along with Vales Point power station.