Peak demand and the energy mix

Increased energy efficiency, reduced industrial demand and the rapid uptake of rooftop solar PV has led to a decreasing demand trend. Although the most recent financial year has seen the trend flatten out. This has predominantly been due to the Liquefied Natural Gas (LNG) projects coming online in Queensland.

Peak demand records were set in 2008-09 and 2009-10 following the increased uptake of energy intensive air conditioning units and some extremely hot weather. Most recently, following the completion of some large LNG projects, Queensland has set a new record for all-time peak demand, reaching 9,097 MW on 1 February 2016. Figure 1 shows the peak demand change over the previous 10 years. Due to the large disparity in the peaks by regions, the data has been indexed using 2006-07 as the base year. 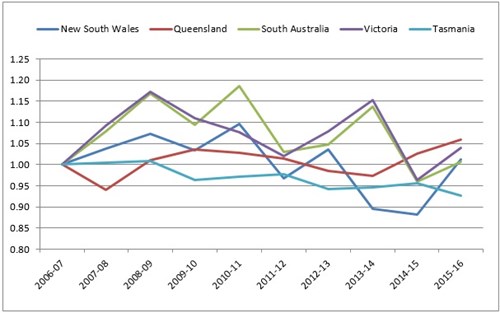 The Queensland peak occurred at 5:30pm on 1 February 2016, where according to APVI the estimated rooftop PV generation at that time was 308 MW[i]. The added generation from rooftop PV increased total generation to 9,405 MW. The diversity in generation across Queensland, through the use of coal, gas and hydro, is highlighted throughout the day in Figure 2. 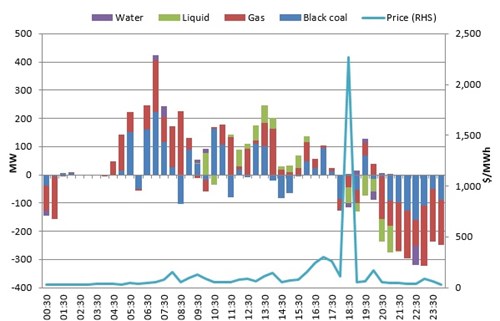 The merit order dispatches the lowest cost electricity until demand meets supply. This is done at 5 minute intervals. Renewable energy is dispatched first as the cost of production is zero marginal cost, this is followed by coal, gas, water and liquid fuels such as oil. A total of 11 periods saw the price increase above $100/MWh indicating the higher cost fuels were called upon to meet demand. The Volume Weighted Average (VWA) price for the day was 138.13 $/MWh, $76.60 higher than the VWA price for the 2014-15 financial year.

Regions have different energy mixes based on the availability of different fuels and natural resources. South Australia is a world leader in the level of both rooftop PV and utility scale wind farms. Figure 3 shows the half hourly change in generation mix in South Australia for their most recent peak which occurred 17 December 2015. 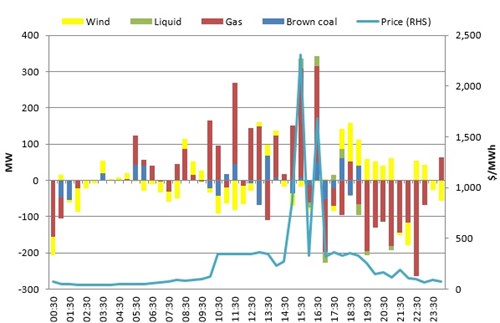 South Australia’s reliance on gas generation is set to increase with the pending closure of the Northern Power station in March this year. Over the recent peak day, coal produced an average of 487 MW of electricity, a total of 11,687 MWh over the 24 hour period. The VWA price for the day was 296.94 $/MWh, $253.75 higher than the VWA in 2014-15 financial year.