The development of onshore gas has been in the spotlight again with the Northern Territory Government’s decision to support, or support in principle, all the recommendations that emerged from the scientific inquiry it established on 3 December 2016 shortly after taking office.

At the same time, it was reported that the Queensland Government Department had stated that fracking had not caused any significant damage to the state’s groundwater in the six years of major commercial development of the coal seam gas industry[i]. And to the south, Santos responded to the record number of submissions (23,000) received on its proposed Narrabri coal seam gas project.

The NT Government’s decision was welcomed by the gas industry and generally well received[iii].

When in Opposition, the ALP committed to a moratorium on hydraulic fracturing until a scientific inquiry was held, a detailed community consultation process and a regulatory framework was put in place. The ALP said that at the end of the process it would either ban fracking or allow it “in highly regulated and tightly prescribed areas”[iv].

The inquiry’s recommendation about no-go zones has been supported and there will be no hydraulic fracturing in areas including national parks, conservation areas, indigenous protected areas, towns, residential and strategic assets and areas of high cultural, environmental or tourism value. In all it quarantines an estimated 49 per cent of the Northern Territory from onshore gas development.

The potential of NT unconventional gas is substantial – Geoscience Australia estimates that there are 257,276 petajoules of prospective shale gas in the NT, with the Beetaloo-McArthur Basin a key focus (see Unconventional gas: On new ground, or just going over the same old ground?). The map below shows the extent of the Beetaloo Sub-basin. 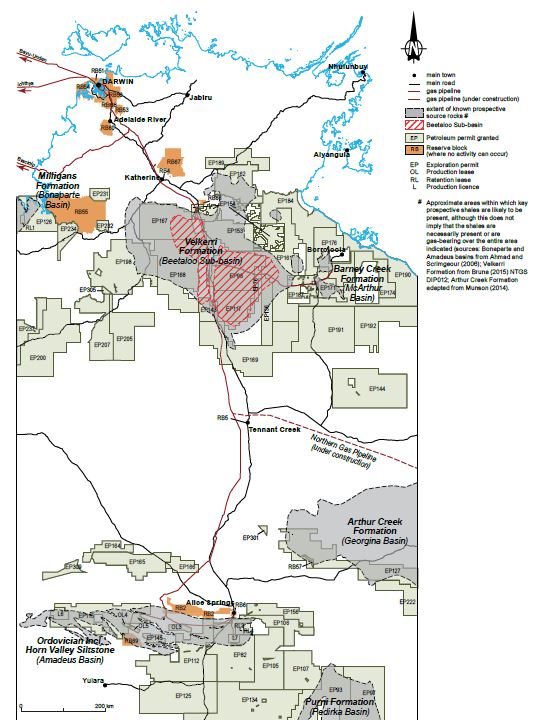 One of the recommendations that has been supported in principle was that prior to any further production approvals being granted, where litigation is brought genuinely in the public interest, cost rules be amended to allow the NT courts to not make an order for the payment of costs against an unsuccessful public interest litigant. The NT Government notes that the intent is to avoid the cost of litigation becoming a barrier to parties who genuinely believe they are acting in the public interest from seeking to appeal a decision. The NT Government says it needs to further analysis and/or consultation to implement this aspect.

The expert panel also considered that merits review should be available to third parties to challenge decisions made on any onshore shale gas developments. It recommended that at a minimum third parties who would have standing to seek merits review would include persons who are directly or indirectly affected by the decision, members of an organised environmental, community or industry group, Aboriginal land councils and persons who have made “a genuine and valid objection during any assessment or approval process”.

There is some concern that the NT could end up like NSW where onshore gas development is not opposed but such onerous conditions and lengthy appeal processes could deter some investors[v].

The key in the NT will be the government’s implementation plan. Given the number of recommendations there are a lot of areas that will need to be addresses and that potential developers will need to satisfy, so it may take time before gas starts to find its way into the market.[vi]

Before gas can be extracted in the NT environmental assessments and changes to the regulatory framework will need to be put in place, some of the key changes will be:

The NT Government has appointed Dr David Ritchie as the independent officer to oversee the implementation of the full set of recommendations. Dr Ritchie is the current chair of the NT Planning Commission and was part of the 10-person scientific inquiry panel that considered hydraulic fracturing.

A Community and Onshore Shale Gas Industry and Business Reference Group will also need to be put in place. The reference group will have representatives from the community, environmental groups, local business, the gas industry, Land Councils and local government. The inquiry report said that the creation of the reference group will assist in establishing trust and confidence in the Government and in the gas industry[vii].

The NT Government has issued a timeline for the implementation of the inquiry’s recommendations, which is shown below:

Figure 2: Proposed timing for the roll out of the design and implementation 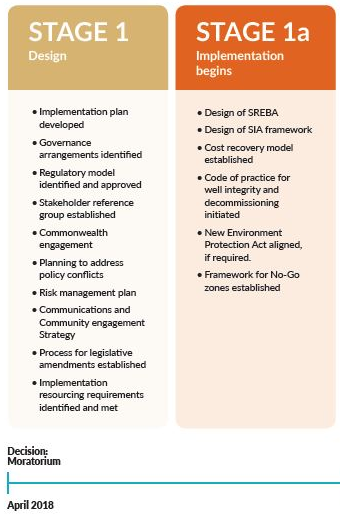 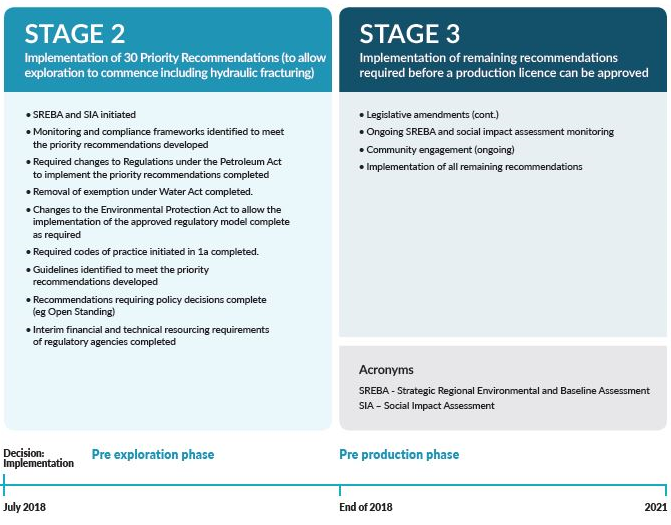 In New South Wales Santos’ response to the record number of public submissions received on its proposed Narrabri project in the state’s north has been released.

Santos’s Environmental Impact Statement (EIS) was placed on an extended 90-day public exhibition in February last year and this week the Department of Planning and Environment reported that it had received more than 23,000 public submissions – which is the most submissions of any project the Department has ever assessed. In its response to the submissions Santos has noted that 16,000 were “form” submissions, and of the local submissions 58 per cent favoured the project. It illustrates that extent of the organised opposition to coal seam gas in NSW.

The company has said that gas could start to flow from 2019-20 if it was approved in early or mid-2018. Yet it (EIS) is still expected to go to the Planning Assessment Commission for independent review (see the process schematic below) and, according to the Australian Financial Review, the project is expected to remain in regulatory “quicksand” for some time before it could be given the green light[viii]

Santos is seeking to develop the project that would involve 850 wells (the project area is shown in the map below).  It intends to make the gas available to NSW via a pipeline linking into the existing Moomba to Sydney Pipeline. The pipeline will be constructed by APA Group and subject to a separate approval. 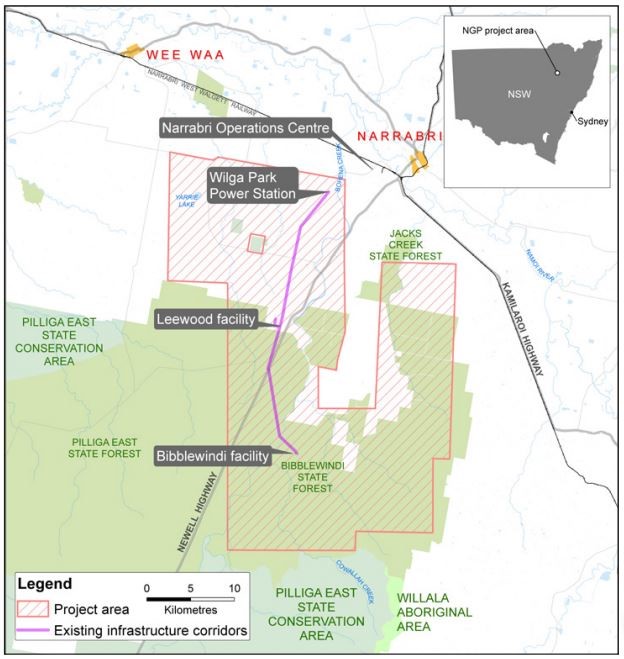 It is widely recognised that gas will have an increasingly important role to play in Australia’s energy sector as we transition to a lower emissions future. There is also recognition that we need additional gas supplies to ensure that domestic gas prices can remain competitive.

The announcement of the NT Government’s decision on onshore unconventional gas development and progress in the approval process for the Narrabri gas project in NSW have the potential to help access substantial additional gas, but both appear to still have a way to go before any gas begins to flow.

While Queensland has been able to successfully introduce and manage a coal seam gas industry with minimal impact on the community, the extraction of onshore gas remains a contested area despite scientific assessments that it is safe and can be managed with appropriate regulatory oversight.

The extent of the hurdles that need to be overcome (amply illustrated by the range of recommendations that have emerged from the NT scientific inquiry, as well as the lengthy process surrounding Santos’ Narrabri gas project) simply highlight the ongoing political sensitivity to development of onshore gas resources.

As energy consumers, we are always looking at more efficient and cost-effective ways of heating and cooling our homes and workplaces. In the southern parts of the country, gas remains a mainstay of heating as many still think it is cheaper than electricity, which is often not the case. But is degasification plausible?

Aug 19 2021
Read Analysis
GET IN TOUCH
Do you have a question or comment for AEC?