The electricity sector is experiencing the largest transformation since its creation, according to the International Energy Agency’s most recent World Energy Outlook (WEO). It predicts that solar PV’s installed capacity will surpass wind before 2025, hydropower around 2030, and coal before 2040.

Energy demand is set to grow by more than 25 per cent to 2040, requiring more than $2 trillion a year of investment in new energy supply, while the increased use of digital technologies is set to be a “transformative shift” and is influencing trends across the energy sector.

The annual report looks at the future patterns of global energy and what impact they may have on supply and demand, carbon emissions, air pollution, and energy access from 2017 to 2040.

Like past reports, the IEA highlights seven themes that are reiterated in the WEO 2018, which it states are vital to a reliable, affordable and sustainable energy future. These are:

The WEO sets out what the future could look like on the basis of three different scenarios: The Current Policies Scenario, New Policies Scenario, and Sustainable Policies Scenario. Below we look at the New Policy Scenario, where announced policies and targets have been included in the WEO assumptions, including the continued development of known technologies.

The WEO estimates the renewables will make up around two-thirds of global capacity additions to 2040, due to falling costs and government policies.

The large growth in solar is expected to be utility-scale, supported by investment in solar PV by households and businesses. The share of generation from renewables rises from 25 per cent today to around 40 per cent in 2040. 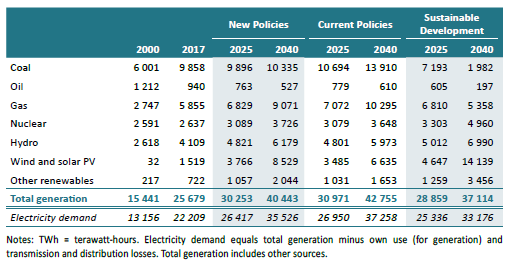 The report notes that this rise in solar and wind generation gives “unprecedented importance” to the flexible operation of power systems – an issue that is of “growing urgency” as countries quickly ramping up their share of solar PV and wind. It states that many European countries, Mexico, India and China require flexibility that has never been seen at a large-scale – it estimates that resources for this purpose double by 2040, with thermal and hydropower plants, interconnections, battery storage and demand response all playing growing roles.

Over the 2017-2040 period the cost of battery storage declines and becomes more competitive with gas-fired peaking plants to manage short-run fluctuations in supply and demand. But conventional power plants still remain the main source of system flexibility, supported by demand-side response and new interconnections.

The rise of renewables coupled with energy efficiency measures slows growth in coal consumption. While there is a slight rise in industrial coal use to 2040, global consumption remains flat. Declines in China, Europe and North America offset rises in India and South East Asia.

Once current coal plant projects under construction are completed, there is a sharp drop in new coal projects after 2020. Yet the report states that the average age of a coal-fired power plant in Asia is only 15 years (compared to 40 years in advanced economies), so it is “too soon to count coal out of the power mix”. 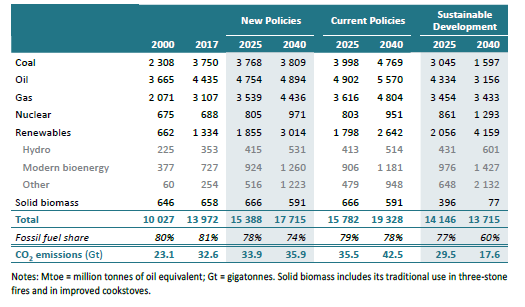 Shown in Figure 2 above, primary energy demand grows by a quarter during the projection period, primarily due to an increase of 1.7 billion people across the globe and rising incomes. However the report notes that this increase would have doubled had there not been improvements to energy efficiency, which it states has proven to be a “powerful policy tool”.

The report estimates that by 2030 natural gas overtakes coal to become the second-largest fuel (and increases across all scenarios). This rise is largely led by industrial consumers (45 per cent increase) while trade in LNG more than doubles due to the increase in demand from developing regions (led by China). The risk of an “abrupt tightening” in LNG in the mid-2020s has been relieved by new projects announced by Qatar and Canada.

In 2000 Europe and North America made up more than 40 per cent of global energy demand, while Asia in the same year account for around 20 per cent. However the report predicts that by 2040 this trend is reversed, largely due to growth from India. India’s energy demand more than doubles to 2040, making it the single largest source of global growth (Figure 3). 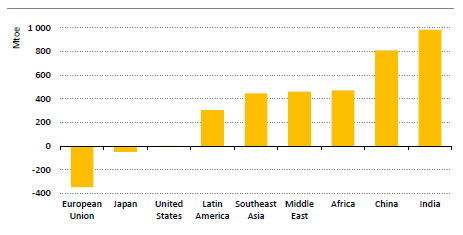 India overtakes Australia and the United States in the early 2020s to become the world’s second-largest coal producer behind China. The WEO also predicts that the “shale revolution continues to shake up oil and gas supply”, with the United States expected to become to be the world’s largest oil and gas producer, accounting for more than half the world’s oil and gas production growth by 2025 – with around 40 per cent growth for gas. While nuclear is expected to remain steady on 10 per cent of generation, generation from this source in China overtakes the US and the European Union before 2030.

In advanced economies electricity growth is slight but the report notes that, conversely, investment for infrastructure upgrades is significant along with the change in the generation mix.

Currently electricity accounts for just under 20 per cent of global final consumption and it rises to 24 per cent in the New Policies Scenario. Global energy related carbon dioxide (CO2) emissions grew in 2017 after three years of remaining flat, and it is expected to remain on a slow upward trend, growing by 10 per cent to 36 Gt in 2040 (Figure 2).

“The projected emissions trend represents a major collective failure to tackle the environmental consequences of energy use,” the report says. 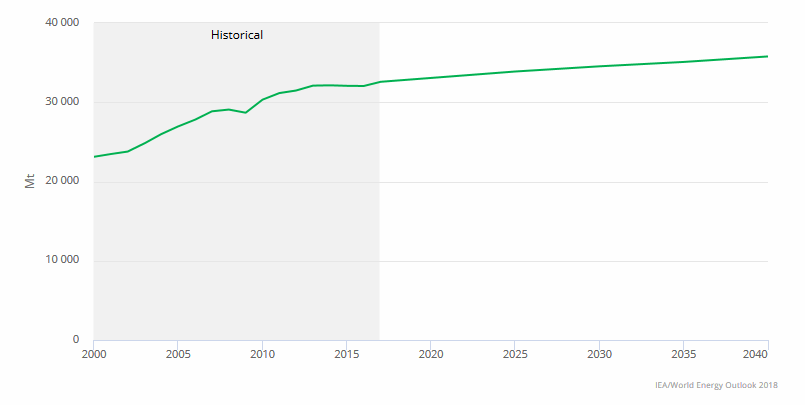 Coal-fired power plants, which make up one-third of energy-related CO2 emissions today, represent more than a third of total emissions in 2040. This is due to projects in Asia, where average coal plants still have decades left to operate.

With oil and gas to remain a large part of the energy mix through to 2040, the IEA believe that much more could be done to reduce the emissions involved in their distribution to consumers.

It estimates that the indirect emissions involved in producing and distributing oil and gas to consumers account for around 15 per cent of energy sector emissions (including CO2 and methane). It states that switching from the highest emissions gas to the lowest would reduce emissions by 30 per cent.

While the expansion of renewables brings major environmental benefits, it also presents a new set of challenges. The IEA emphasises the importance of policy choices made by governments to determine the future of the energy system: “Rapid, least-cost energy transitions require an acceleration of investment in cleaner, smarter and more efficient energy technologies. But policy makers also need to ensure that all key elements of energy supply, including electricity networks, remain reliable and robust,” the report says.

It states that government policy will play a crucial role in the changes already underway, while market designs will need to be robust as power systems decarbonise.

“Our analysis shows that over 70 per cent of global energy investments will be government-driven and as such the message is clear – the world’s energy destiny lies with government decisions,” said Dr Fatih Birol, the IEA’s Executive Director. “Crafting the right policies and proper incentives will be critical to meeting our common goals of securing energy supplies, reducing carbon emissions, improving air quality in urban centres, and expanding basic access to energy in Africa and elsewhere.[i]”