The closure of the coal-fired Northern Power Station in South Australia earlier this year, ongoing speculation about Victoria’s Hazelwood brown-coal power station, as well as the push for more state-based renewable energy targets, have all helped increase debate about energy security, and, as part of this discussion, what other generation options may be available to the National Electricity Market.

To meet the Renewable Energy Target (effectively 23.5 per cent of Australia’s electricity generation will be derived from renewable resources by 2020[i]) and help meet Australia’s commitment under the Paris Agreement to reduce greenhouse gas emissions to 26-28 per cent by 2030, an additional of 6,000 MW of new renewable plants will need to be built.

While a great deal of the focus on new renewable generation has been around wind (which is by far the most dominant new renewable source of electricity) and solar – both household photovoltaic (PV) and large-scale solar - as we seek to diversify our energy supply, there will continue to be assessment of other renewable options.

In the recent paper, “A revised assessment of Australia’s national wave energy resource” the CSIRO has considered the potential of this renewable generation[ii].

Figure 1 shows an international comparison of estimated wave resources against a country’s electricity demand. As shown below, the potential wave resource in Australia, Chile and New Zealand greatly exceeds their total electricity demand. Table 1 shows the estimated total wave energy crossing the 25 metre depth is about 1800 TWh/year[iii], about seven times the country’s total energy requirements, given that total energy usage in 2013-14 was 248 TWh[iv]. 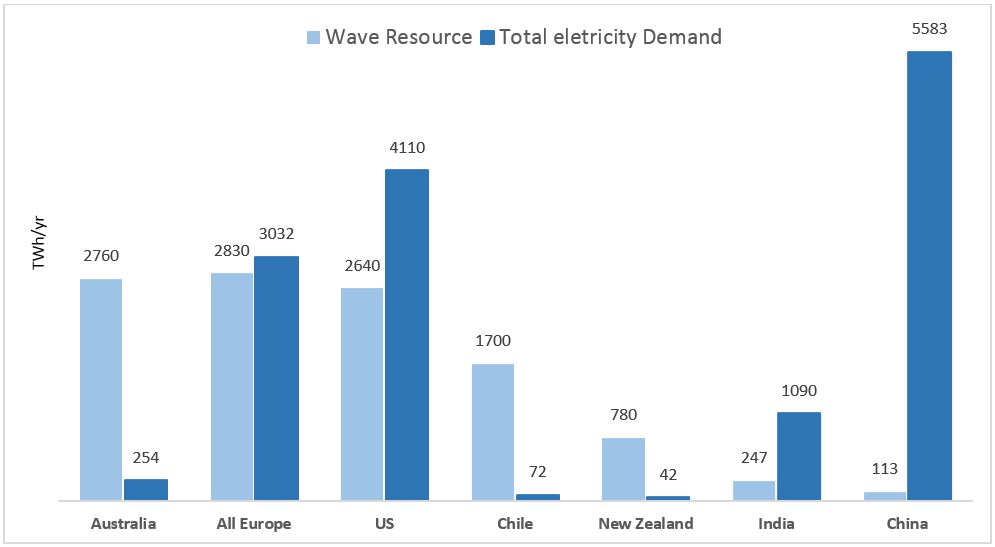 The report reveals that the additional 17,000 GWh of renewable energy required to meet the RET by 2020 is equivalent to the total amount of wave energy at the 25 metres depth contour in Northern Territory, which is Australia's least energetic coastline. 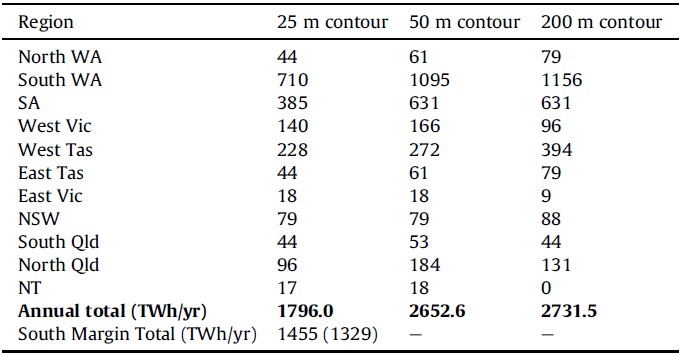 Globally, wave resource estimation has been measured by wave energy density or wave energy flux (in units of kW/m of wave crest)[vii]. At the 25 metres / 50 metres /200 metres contour, the southern portion of Western Australia shows the greatest available potential resources compared to other regions. South Australia and the west coast of Tasmania also have the potential to be the nation’s hot spots for wave energy. At deeper levels, west and east Victoria has available resources less than observed at 25 metres and 50 metres due to the shorter length of the 200 metre isobath.

What happens when low and high events occur?

A resource is considered to be attractive when the maximum wave height of an installed device does not exceed the wave height at which most energy is received. So while the southern coastline has a seemingly attractive energy resource, large storm waves in these regions, means deployed devices would need to be engineered to cope with greater loads, increasing the technical challenge.

The issue for wave energy remains whether it can produce cost effective and reliable electricity. The Australian Renewable Energy Agency (ARENA) has provided funding of more than A$44.3 million to nine wave renewable energy projects to date (two closed before completion, one was due to damage to a device being damaged beyond repair, and another one was not commercially viable, hence not attractive to the investors)[viii]. Elsewhere, the ARENA funds have supported demonstration projects, including notable international successes (BioPower Systems, and Carnegie Perth Wave Energy Project)[ix],[x]. Figure 2 shows the different identified wave energy developers along Australia’s coastline. 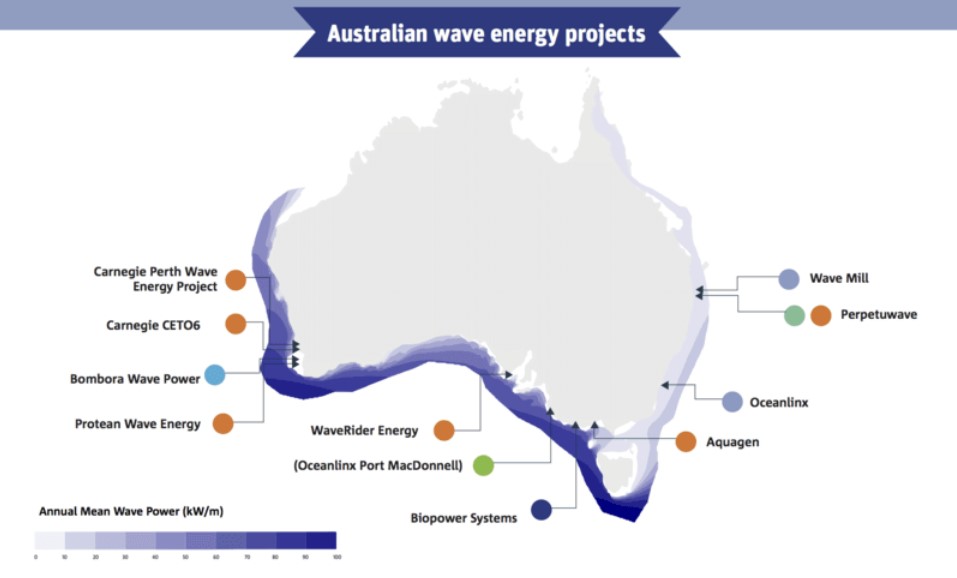 Internationally, the potential associated with wave energy has attracted over 170 developers[xii].  Figure 3, shows 45 per cent of wave energy developers are based in the European Union. There is expected to be 26 MW of installed capacity in Europe by 2018[xiii]. The UK and Denmark have more than one-third of Europe's total wave companies who are developing and testing wave devices. Along with Norway and Sweden they lead device research; while Ireland, Portugal, as well as the UK, have invested significantly in development of sea-based test centres[xiv].

Figure 3: Distribution of wave companies in the world 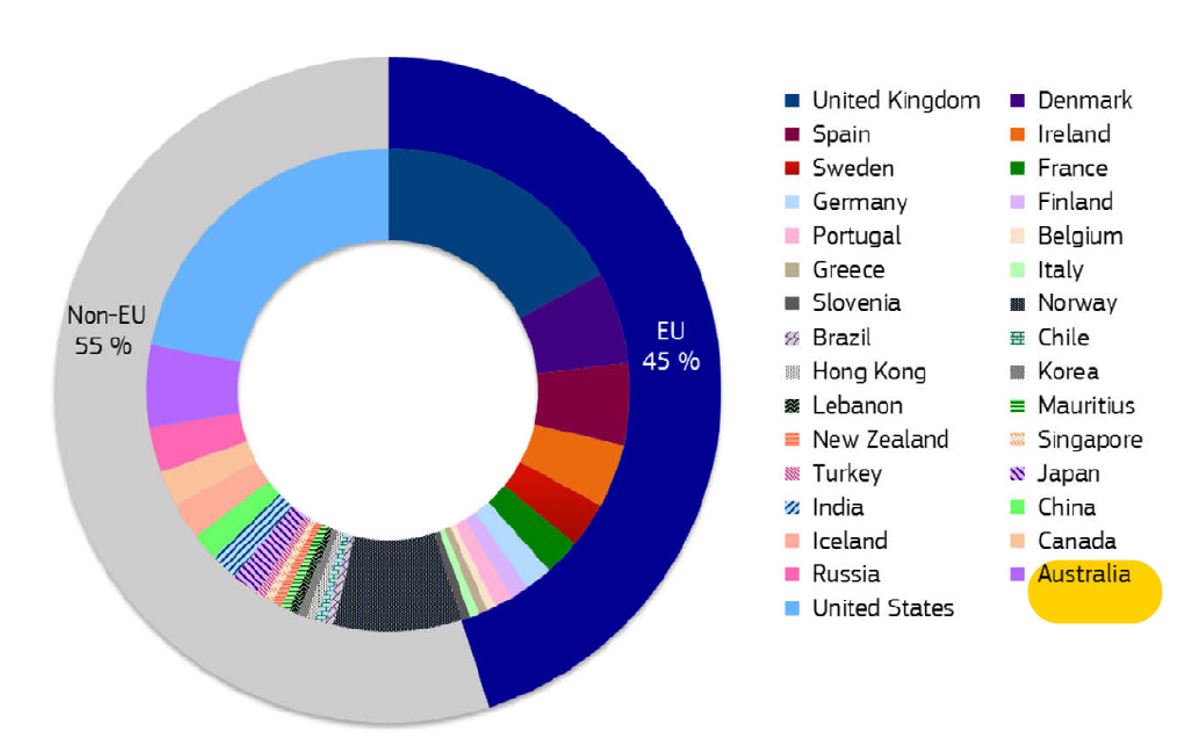 It is currently not cost-effective to deploy wave energy devices at 200 metre depth contour due to limited technology and typically it involves travelling hundreds of kilometres offshore to obtain a similar amount of wave resources as can be achieved at 50 metres. With current technologies, devices are typically deployed in water less than 30 metres deep. Due to limited commercial experience, IRENA estimated the levelised cost of electricity of wave energy technologies in the 10 MW of demonstration projects is in the range of A$500-900/MWh[xvi]. By comparison, in the early stages of wind development, turbine costs were around A$720/MWh in 1981. The cost has since fallen to around A$110/MWh for onshore wind[xvii]. Wave energy costs are predicted to drop to around A$165-325/MWh if deployment levels of more than 2GW are achieved in 2030.

Wave energy remains in its infancy and it still has to demonstrate its reliability, feasibility and survivability and cost effectiveness.