The latest Australian Energy Market Commission’s retail competition review has highlighted the emergence of a new market structure as market concentration continued to fall during the past year.

The review was also notable for being the last before the re-introduction of price regulation in in the form of the Default Market Offer and the Victorian Default Offer. Future reports will be able to assess whether the regulatory changes have benefited consumers.

The commission’s work flags some positive outcomes as well as overall market measures and trends during the year (which are shown in the summary table below). Some of the positive developments it highlights are:

Summary of measures and indicators 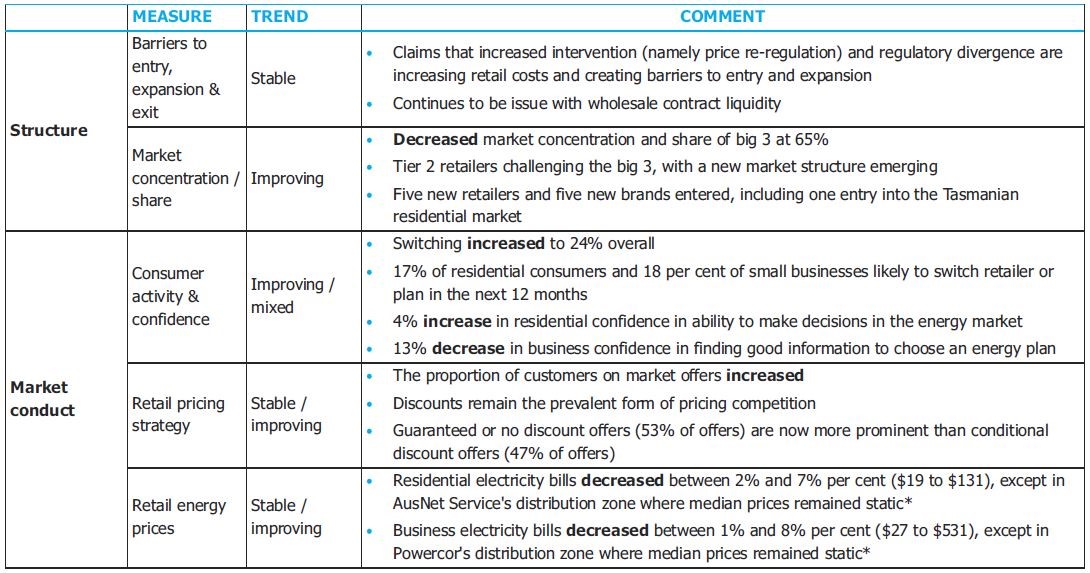 Retail prices generally decreased over the past year:

The AEMC has also identified improvements in structural competitive metrics in the past 12 months, including:

Despite all this a note of caution was raised via the commission’s retailer survey and interviews. Retailers consider that barriers to entry and expansion in the market are likely to increase in future with new and emerging retailers pointing to the regulated cap on standing offers decreasing product innovation and switching, which will make it harder for new and emerging retailers to enter and or expand. As noted, this will be able to be tested in future reviews.

The new market structure that has emerged is made up of three types of retailers (see figure 1 below), categorised by the commission as: 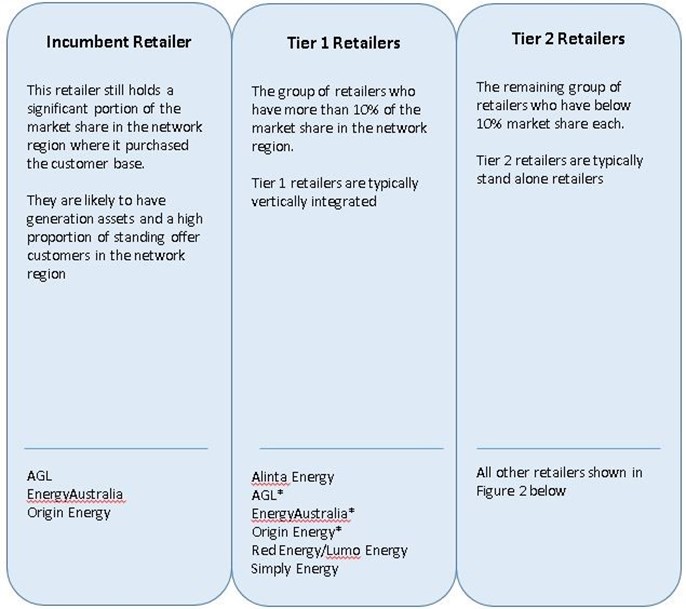 To better analyse and understand this emerging market structure, the commission has now recommended that the Australian Energy Regulator require retailers to provide data on customer numbers and the type of offers they are on by each network region.

A shifting dynamic in the market share of both vertically integrated and standalone retailers (these categories are further explained below) was identified by the commission’s review.  Until recently vertically integrated retailers (explained further below) were limited to the big 3, but as shown in figure 3 that has now broadened to include more retailers. Retailers in the AEMC’s survey noted the market structure has moved from a big 3 to a “big 5/6”.

Since retail contestability incumbent retailers have progressively lost their significant market share to other retailers. While initially this involved one of the big 3 entering network regions to compete against an incumbent, smaller retailers have since been entering and the most successful of these were or have become vertically integrated.

The review notes that while analysis of market share shows the three incumbent retailer continuing to have the biggest slice of the market, now the three largest in some network regions are no longer just the big 3, which the AEMC comments represents a “significant shift in the retail electricity market structure” and appears to be fundamentally changing the way in which these jurisdictional markets operate.

Apart from the decreasing market concentration the review points to recent examples to illustrate how it sees competition actually improving in the NEM. These include:

The review notes that consumer switching between retailer types shows the changing market dynamics in the electricity market structure.

Figure 2: Consumer switching within and between retailer tiers, 2012-2018 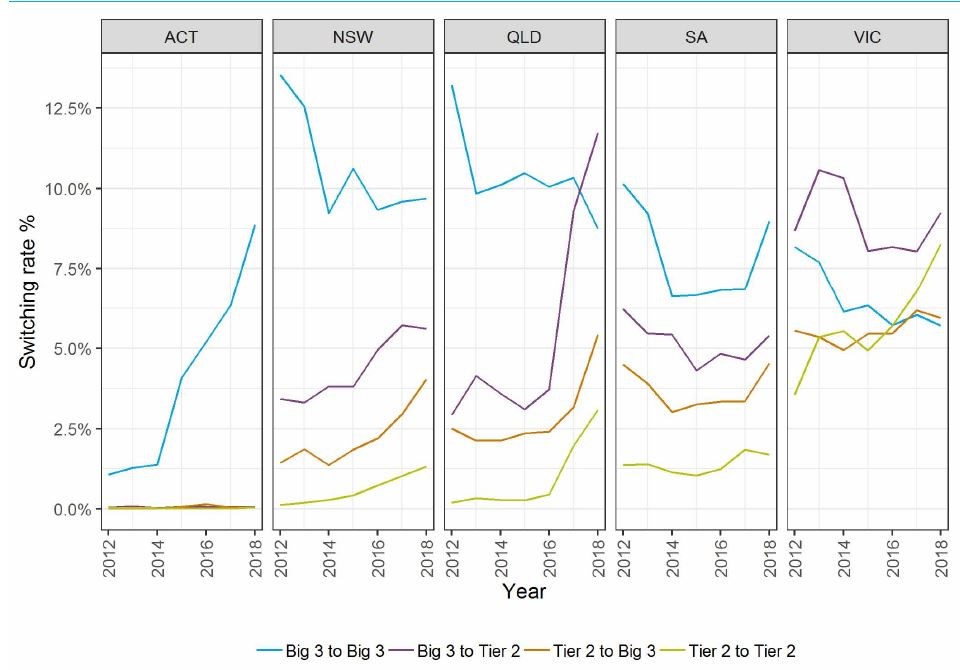 When assessing retailer models the AEMC  splits them into two main groups based on their business structure – vertically integrated and standalone retailers – as well as their ownership structure (figure 3).

Vertically integrated retailers are part of a business that owns generating assets, as well as retail customers. This model provides a means for retailers and generators to internally manage the risk of price volatility in the wholesale market. The trend of retailers to vertically integrate continued in 2018 and the commission notes that in its retailer surveys and interviews some form of vertical integration “is becoming a prerequisite to be able to expand to an efficient scale”.

It also notes that some retailers are vertically integrated through an arms-length relationship, so still have access to wholesale hedging contracts through the parent company that owns or is a generation business.

Figure 3: Structure of electricity retail businesses in the NEM 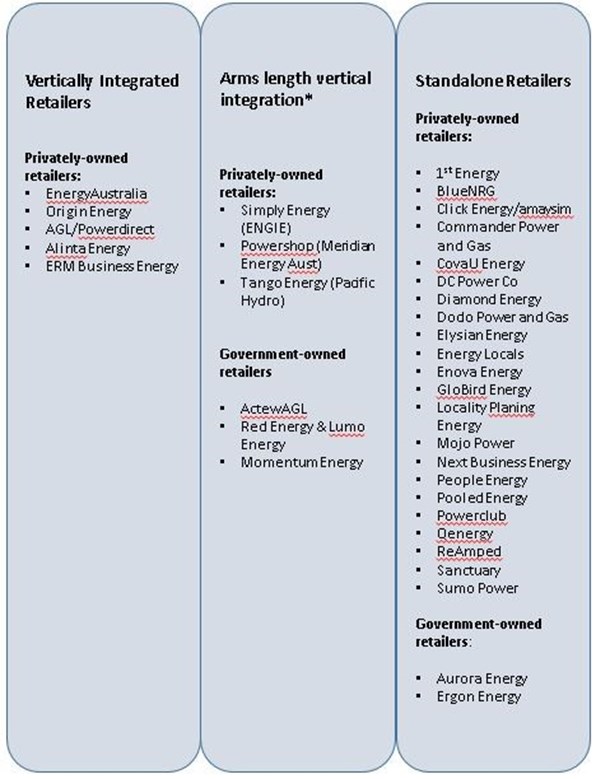 Source: AEMC.  * A retail business that is ‘at arms length’ from their parent business who owns, or is, a generation business.

These  typically contract with external parties for their whole risk management portfolio. Typically they have a higher cost to serve due to a larger number of derivative contracts they have to purchase to hedge their load.

The AEMC’s latest review is a useful and timely reminder that competition has brought results and encouraged new entrants, it will be interesting to note the impact that recent regulatory changes, such as the introduction of default price caps will have on the emerging market structure and level of activity.

[i] The AEMC states that the big 3 have traditionally held significant market share because the businesses are the incumbent retailer – the business that purchased the retail customer base at privatisation – for at least two network regions.