New energy storage solution: A mountain of an idea

The study recently published in Energy, and led by researcher Julian Hunt and his colleagues[i], proposes that MGES can fill a gap in storage services particularly for grids up to 20 MW, and provide a solution for seasonal storage where there is no water for pumped-storage solutions.

So what’s MGES all about? We take a look here…

The researchers state that MGES could be a feasible option for micro-grids and power systems where electricity costs are high, demand for energy storage is less than 20MW, and there is a need for seasonal storage – like in rural and remote areas.

While renewable sources such as wind and solar have the potential for lowering electricity costs in micro-grids, they state that renewables require a “flexibility solution” due to their intermittent nature, and there is currently no viable technology offering affordable long-term energy storage with a low generation capacity. However according to the paper, mountains could be used to help meet this task, with gravity (and also hydropower) making MGES a possible solution.

Shown in Figure 1, the paper states that this can be achieved by: 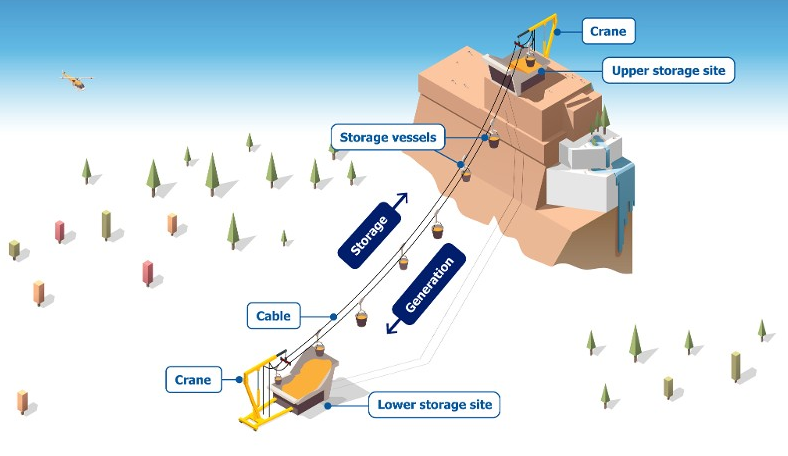 MGES cost varies from US$50-100/MWh of stored energy and US$1-2 million/MW of installed capacity. The higher the height difference between the lower and upper storage sites, the lower the potential cost of the project.

The paper notes that storage capability of batteries in a yearly cycle may not become economically viable, due to the high cost of stored energy ($/MWh) and a high rate of losses and/or self-discharge per day. Yet it states that pumped-hydro storage technologies can help to resolve this, by storing a large amount of energy in the form of potential energy stored as the mass of water in high elevations.

The paper notes that MGES has the additional benefit that water can be added at any height of the system, increasing the possibility of catching water from different heights which is not currently possible in conventional hydropower. 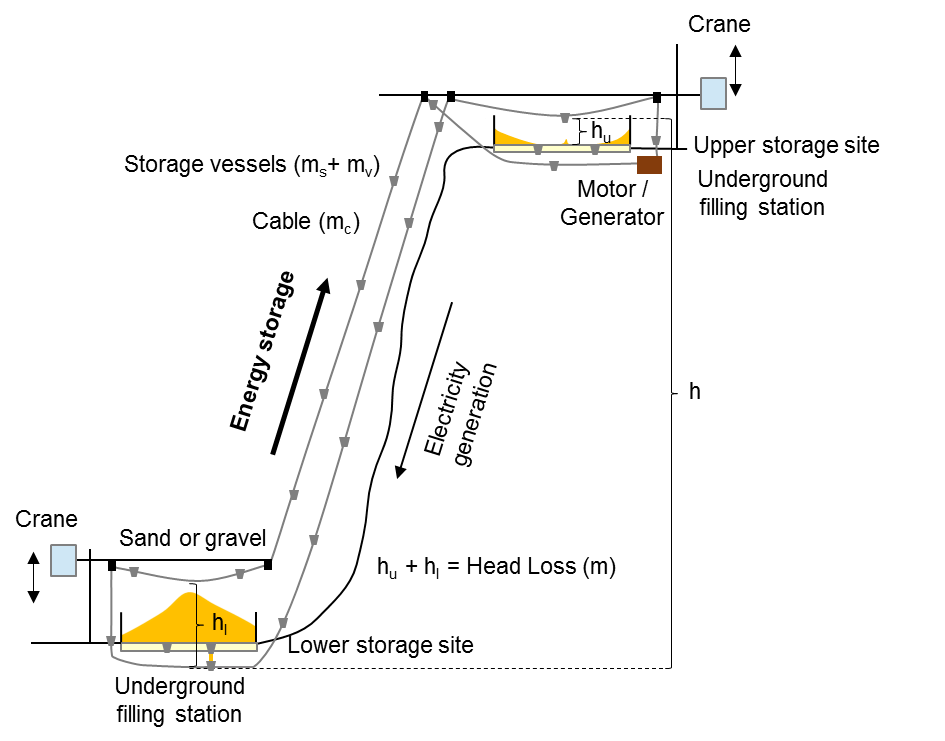 MGES can continuously store energy for months and then generate power continuously for months (or when there is water available for hydropower). In the Institute’s media release, lead researcher, Hunt said[ii]:

“One of the benefits of this system is that sand is cheap and, unlike water, it does not evaporate – so you never lose potential energy and it can be reused innumerable times. This makes it particularly interesting for dry regions.”

However Hunt believes that MGES should not be used for peak generation, daily storage cycles or the provision of ancillary services, with these being more suited to batteries (especially with decreasing battery costs). Instead MGES could fill a gap for locations with long-term storage requirements and especially in dry regions.

“It is important to note that the MGES technology does not replace any current energy storage options but rather opens up new ways of storing energy and harnessing untapped hydropower potential in regions with high mountains”.

The paper also looks around the world, and at what regions could be viable to have a future energy mix using only wind, solar, batteries, and MGES to supply demand.

“Additionally, pumped-hydro storage plants are limited to a height difference of 1,200 meters, due to very high hydraulic pressures. MGES plants could have height differences of more than 5,000 meters. Regions with high mountains, for example, the Himalayas, Alps, and Rocky Mountains, could therefore become important long-term energy storage hubs. Other interesting locations for MGES are islands, such as Hawaii, Cape Verde, Madeira, and the Pacific Islands with steep mountainous terrain,” Hunt said.

The authors note that their main contribution is to show that gravitational energy storage technologies are interesting for long-term energy storage in systems with small energy storage demand. The technology used for MGES is already being applied in industries such as construction and mining, with the main difference being that the MGES motor also generates electricity when lowering the elevation of the mass.

They note that while the generation cost of MGES is relatively high, it could offer an interesting solution for small islands or mini-grids due to the high cost of electricity supply, seasonal demand variations, and the challenges of incorporating renewable energies.

The researchers state that MGES can serve as a storage solution to balance seasonal variations in electricity supply from wind and solar sources, however, also note that mountainous regions, where the potential for MGES is higher, also tend to favour wind power.