NEM generation: Stepping on the gas?

Output from gas-fired power stations in the National Electricity Market (NEM) increased by 32.3 per cent during 2017, as it largely filled the baseload gap left by the recent closure of coal-fired plants in South Australia and Victoria. We take a look below at the level of gas generation in the NEM.

Last year output from Pelican Point was up 470 per cent (2481GWh) while the Osborne power station increased its electricity generation by 44 per cent to 1256GWh in 2017 (see figure 1).  Pelican Point’s operating hours increased to 87 per cent of the time compared to 30 per cent a year earlier. Operating hours at Osborne Power Station were also significantly higher in 2017.

The Pelican Point power station returned to its full 479MW capacity in mid-2017 after owner ENGIE secured gas supply and signed electricity offtake agreements with a number of customers, including arrangements with Origin Energy to provide gas to help underpin the operation of the capacity of the station’s turbines[i]. The plant had effectively been operating at half capacity since March 2013 due to over-capacity in South Australia.

The Torrens Island A power station reduced its output by 23 per cent in 2017, but its 522GWh of generation was still 108GWh higher than the electricity it produced in 2015. Two of the four Torrens Island A units are to be replaced by a new 210MW gas-fired plant at Barker Inlet. The 50-year old Torrens A plant is expected to be progressively mothballed from July next year. The four Torrens Island B gas turbines will continue to operate[ii].  Last year Torrens B generated 2236GWh, a 17 per cent increase on its 2016 output.

The Quarantine gas-fired peaking plant produced 204GWh of electricity in 2017. Origin Energy is proposing to increase the capacity of the 224MW open cycle gas plant by 160-180MW and has cited the need to support SA’s supply variability due to the high levels of renewables in the state.[iii] 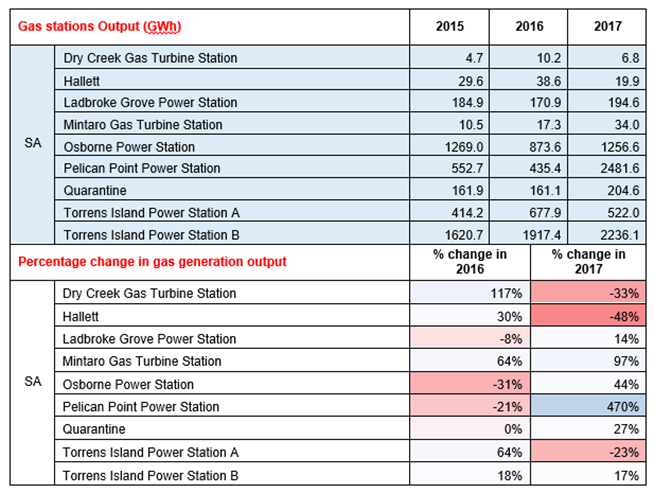 Gas-fired generators also increased their contribution to Victoria’s power supply in 2017, reaching 6.96 per cent of total generation, up from 1.68 per cent the year before. This reflects the reduced baseload supply available with the withdrawal of the 1600MW Hazelwood power station in March 2017. Prior to its closure Hazelwood generated 2380GWh of electricity in the first quarter of 2017.

The previous higher levels of gas-fired generation would have been encouraged by a temporary drop in gas prices at the end of 2014 because of the availability of cheap ramp gas. Ramp gas is produced as CSG wells are de-watered in advance of optimal gas production for LNG plants.  The increased CSG well development was supported by the development of Queensland’s three LNG projects - Curtis Island which started operating in December 2014, Gladstone LNG which began production in September 2015, and Australian Pacific LNG which began production in December 2015. It was also reported that the temporary gas surplus from this ramp gas was exacerbated by a delay in the start-up of QCLNG, which was originally slated for the first half[iv] of 2014.  The removal of the gas oversupply is reflected in the Australian Bureau of Statistic’s gas price index for the east coast gas market which was 97 for the September 2015 quarter and increased to 122.8 in the March 2017 quarter.

The higher gas contribution in 2015 coincided with reduced coal-fired output from the Mt Piper, Eraring, Liddell and the Redbank and Wallerang power stations. In 2015 EnergyAustralia’s parent CLP Group reported that its Mt Piper black coal-fired power station operated at reduced capacity (it generated 5.22TWh, compared to 6.98TWh in 2017) during the year because of uncertainty surrounding ongoing coal supplies. Wallerawang and Redbank power stations were closed at the end of 2014.

In September Hydro Tasmania announced that it would operate the 208MW CCGT plant[v]. The plant was previously brought back into service in December 2015 during Tasmania’s energy issues resulting from the loss of Basslink and low hydro dam levels.

Full details on power plant generation, hours of operation and change in annual output can be found here.