AEMO plan: What are the risks?

In its National Transmission Network Development Plan (NTNDP) AEMO projects that more interconnection between regions in the National Electricity Market and more generation capacity will be needed as early as 2021[i].

More interconnection is required to transport energy from areas where new large-scale generation will be developed to supplement power in areas where incumbent generation is winding down.

Additionally, to replace retiring capacity and complement high shares of intermittent generation, new generation capacity is needed for energy and essential network support services. For example, AEMO models that new gas-powered generation in Victoria (up to 3,000 MW in its neutral scenario, outlined below) is located to take advantage of the spare network capacity made available by the retirement of coal plant, avoiding the need to augment the network in other areas.

The NTNDP outlines AEMO’s strategic outlook over 20 years for efficient transmission grid development. Beyond 2030, the scale and timing of changes in the generation mix is highly uncertain and largely depends on the decisions of coal-fired generators and the direction of climate policy.

The challenge in long-term planning is to minimise the risks to ensure development of the most appropriate long-lived assets, particularly in a rapidly changing energy sector. The risks of creating long-lived assets that are stranded, but earn a regulated return from consumers is real and significant. Interconnectors increase the ability for electricity to be moved from one region to another, opening competition from more generation. However, transmission developments can also undermine the case for local generation (cheaper generation pushing out existing, but more expensive plant) and thereby contribute to worsening regional system security (fewer sources of frequency and voltage control and less inertia).

In its report AEMO hedges its bets and advises for both new transmission and generation.

AEMO captures the trade-off in its opening, saying that as long as the system operates without any region being separated, there will be sufficient inertia to maintain system security:

“Sufficient inertia is projected to be available over the next 20 years to maintain a secure and reliable supply, but only if the network remains interconnected following disturbances. Following a synchronous separation event, South Australia is already at risk of widespread outages unless mitigation measures are put in place.” p6

AEMO projects that more interconnection and more generation capacity is needed in the near term, as early as 2021.

Figure 1: AEMO’s infographic says local solutions are required, but it is unclear how the market will deliver them.

The need for transmission is dependent on supply of generation and demand for electricity – moving supply to the locations where it is being used reliably and securely. Growth in electricity demand is driven by population growth and economic activity, but in the future it will also be driven by technology change and slowing demand from heavy users (such as aluminium producers). Over the outlook Australia’s population growth and economic growth is also modest[ii]. When modest demand drivers are combined with the potential uptake of solar PV, electric vehicles and battery storage there is more downside risk than upside risk on the outlook for electricity demand. Meaning the driver of transmission investment is not an expansion in demand, but the change in the supply mix.

The outlook for supply is much more uncertain than demand, and the risk to the estimated benefits of long-term investments is significant. The Council of Australian Governments (COAG) recommended that the NTNDP assume a 26-28 per cent emissions reduction below 2005 levels by 2030 (reflecting the international COP21 agreement to lower emissions). However, Victoria, the ACT, New South Wales and Queensland are all pursuing policies to increase the total amount of renewable energy generation and there remains no clear direction at the Commonwealth level via a national plan to decarbonise the energy sector. The generation mix required under an expanded national RET, emissions intensity scheme or coal closure program would be significantly different and require differing levels of system support services and capacity to move energy.

To tackle this uncertainty AEMO examines the need for transmission in the 2016 NTNDP under three scenarios: 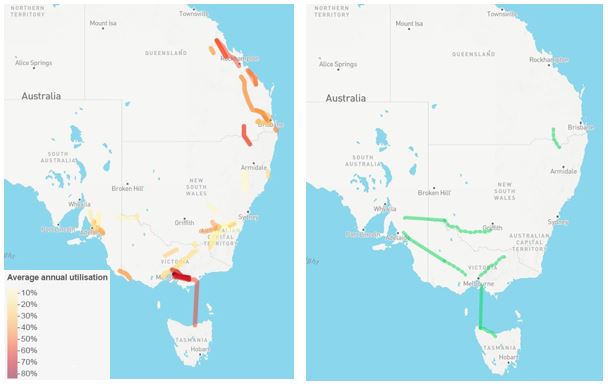 Large-scale investments take years to plan and build, raising the risk of assets becoming under-utilised or stranded, and under the current policy and technology uncertainty these risks are high.

In 2016 ACIL Allen consulting analysed the potential options to maintain system security with high shares of intermittent generation[iv]. Their broad analysis outlined relatively low cost options in the near term and compared them against longer term options, such as greater interconnection (see figure 3). For example, retrofitting frequency control support to existing plant is the lowest cost option to support the network, however under the existing framework it would not be economic.

Network support services which increase security and reliability of supply can be supplied by both synchronous generators, (hydro, gas and coal generators) as well as network equipment.

Considering the relative costs and benefits of sourcing network support services that increase system strength and frequency control is essential to finding the least cost solution. The NTNDP is based on identification of network gaps by network service providers so it favours network-based solutions for provision of support services (such as inertia, voltage support and system strength).

The network solutions involve the purchase of dedicated equipment, such as switching capacitors.  Conventional generators are able to provide these network support services at all times at a lower cost than the capital costs of purchasing the dedicated equipment.  There is the potential for the NTNDP to lead to sub-optimal outcomes by advocating investment in network capital as opposed to supporting cheaper generation based alternatives to address the lack of network support services.

This problem is exacerbated by the lack of incentives for synchronous generators to provide these services. AGL has proposed a rule change to create a market for inertia services[v]. The Network Support and Control Ancillary Services (NSCAS) framework does allow services to be purchased by network service providers from generators, however the current methodology used in calculating the NSCAS gap (based on looking at historical network constraints) does not identify gaps that may be present in the future. To find the least cost solutions for energy security the least cost way of providing these services needs to be explored.

The NSCAS framework could be used to develop a means for generators to indicate to transmission service providers the level of support in each of the areas they are able to provide. NSCAS are contracts procured by Transmission Network Service Providers (TNSPs), or AEMO as a last resort, for non-market ancillary services such as voltage support, inertia, and fault level provision.

Whilst NSCAS is a good mechanism for delivering a service, the determination of the level of service required is still relatively underdeveloped. In its analysis of the South Australian system black events of September 2016, AEMO acknowledges that it has highlighted an NSCAS gap for the region[vi]. An investigation is still in progress and AEMO will publish a report in early 2017 to further explore the requirement including the size, and trigger date of the NSCAS gap.

South Australia is providing valuable lessons about the operation of a power grid with high amounts of intermittent generation. The tumultuous events of September 2016 are leading to important findings and changes to the way we operate a system in transition to decarbonisation with wind and solar. The NTNDP modelling clearly identifies South Australia’s emerging reliance on interconnection driven by a changing generation mix. While this has not increased the likelihood of non-credible contingencies occurring, it has impacted the capacity of the power system to manage the potential consequences. And here the NTNDP is unclear, because while the analysis acknowledges the vulnerability of South Australia to operate as an island, stating the risk of outages is high when separated from the NEM, it argues that greater interconnection is required. But greater interconnection will diminish the business case for local synchronous generation in South Australia, which could push the region to rely further on neighbouring generation for secure supply.

The risk is that new interconnectors could increase costs and reduce reliability if they are not part of a national energy and climate strategy. The NTNDP needs to be considered in the context of such a national plan. The status quo of policy uncertainty, lack of coordination and unreformed markets is increasing costs, undermining investment and worsening security of supply.