Lights out for solar thermal?

Late last week the South Australian Government announced that SolarReserve, the proponent of a solar thermal power plant at Port Augusta, had failed to win funding for the $650 million project.

The 150MW Aurora Project was originally planned to be developed about 30km north of Port Augusta, the home of the former Northern and Playford brown-coal plants. It was to include eight hours (1100MWh) of moltern salt storage and was expected to provide 500GWh of electricity annually and provide dispatchable baseload power[i].

The cutting edge project was to receive $110 million in concessional funding from the Federal Government, which was part of a deal with former SA independent Senator Nick Xenaphon for his support for legislation. It also entered a 20-year power purchase agreement with the SA Government to provide electricity at no more than $78/MWh, which was well below the identified costs of solar thermal. The 20-year PPA that the SA Government was offering would also have helped secure a lower price than otherwise, but it was still well below the identified costs for solar thermal technology (see below).

Despite this support the big challenge for Solar Reserve was always likely to be finding the financing required. The date to achieve Financial Close was extended by the SA Government to 31 May 2019 from its original target of 1 February 2018. And in May last year it sought approval to add around 70MW of solar PV. The plans for the additional solar PV were first revealed in a development application to the South Australia Planning Commission, submitted in late April. The addition of solar PV appears designed to lower the overall costs for the project.

So does this mark the end of CSP in Australia? Whether someone else will try to pick up this project – the SA Government announced that SolarReserve has proposed to sell it to a third party - remains to be seen. But CSP while it continues to face challenges as a still emerging technology, is expected to continue to develop internationally, although it is likely to stay a small part of power delivered from solar[ii].

There are two major types of concentrated solar power (CSP), parabolic troughs and solar power towers[i]. In the case of parabolic troughs, curved mirrors are arranged along a line in order to focus sunlight onto a tube containing a fluid. The heated fluid can be used to drive an electric turbine. The majority of CSP plants of 50MW and above around the world are this type, with Spain and the US having the greatest capacities of such plant. Solar power towers use hundreds of thousands of mirrors, known as heliostats, which direct the sun to a central tower. In most current plants this is used to heat molten salt.

There are an estimated 5GW of CST systems deployed internationally[iii]. Due to government support initiatives such as tax credits, debt facilities and feed-in tariffs early development was led by the US and Spain. More recently, CST plants have been developed in China[iv], Morocco[v] and Israel[vi].

The critical issues confronting solar thermal plants, much like more traditional generators, is that solar PV and wind offer cheaper renewable alternatives.  Various modelling of the costs of different types of generation technology illustrates the challenge for solar thermal.

Figure 1: Comparison of 2018 capital costs of generation technologies with estimates from previous studies 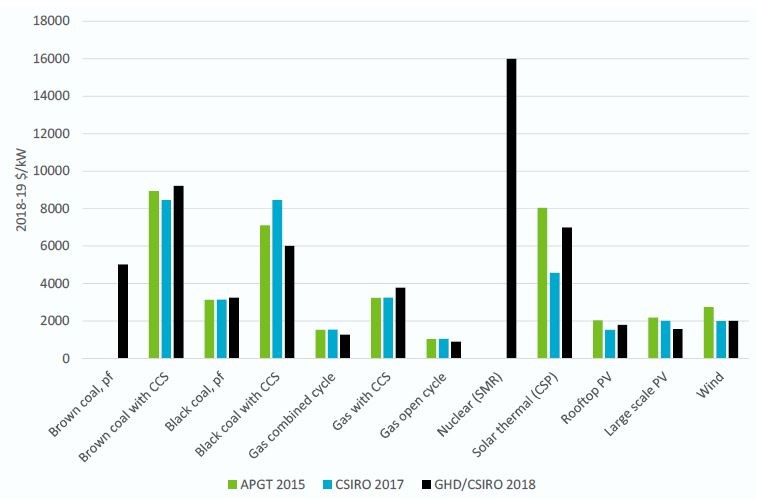 The US Energy Information Administration  (EIA) has also projected the estimated levelised cost of electricity for new generation technologies in 2023 and this illustrates that the cost challenge for solar thermal plant will continue, particularly compared to solar PV and onshore wind farms. 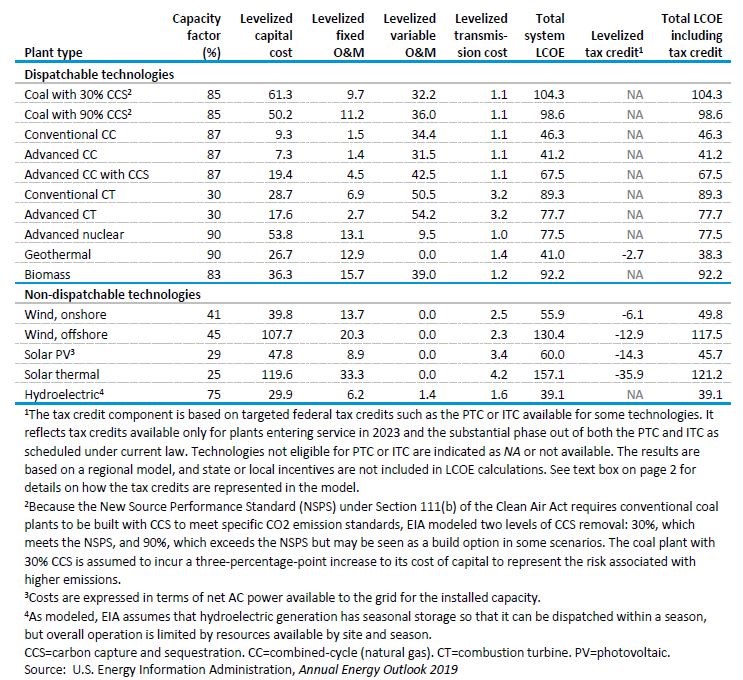 Locally, the Australian Renewable Energy Agency (ARENA) funded a feasibility study for a 20MW solar thermal power station at Perenjori in WA – the location was selected because it had good solar resources, was at the edge of the grid, and there was potential for offtake by an electricity retailer and iron ore mine. It concluded that the plant with 7 hours storage could provide electricity at an estimated cost of $320/MWh. ARENA indicated that a larger 100MW plant could deliver electricity at an estimated $177/MWh[vii].

The dramatic and sustained fall in the cost of solar PV has meant solar thermal plants cannot compete. Equally wind farm cots are much lower cost[viii] and both wind and solar PV technologies are mature.  Figure 3 shows the ongoing decline in PV prices reported in the US, including those for utility scale solar farms.

But are the straight capital cost assessments the only factor to consider in a still-emerging technology? In a solar thermal roadmap report to ARENA last year consultants Jeanes Holland and Associates (JHA) wrote that CSP provides additional value to the network over non-scheduled generators, and believes it is on track to become more competitive with wind or solar with battery storage, and is expected to outperform both batteries and pumped hydro storage “within the next decade”[ix].

Where large-scale solar thermals plants are being constructed it continues to be with government support. Support for solar thermal has been based on the technology making itself more dispatachable and therefore more flexible than standard solar PV plants[x].  JHA notes that around 40 per cent of existing plants and most new plants incorporate thermal solar storage with molten salt becoming the current industry standard.

Respondents to an ARENA request for information on CST referred to the key advantage of cost-effective, integrated thermal energy storage and the characteristics of dispatchable generation via synchronous generators.  “There is a consensus in the responses that although a CST [CSP]power plant’s LCOE is higher than that of wind or PV without storage, the extra values that CST brings to the system more than justify the extra cost”[xi].

CSP projects in Australia to date have largely been smaller demonstration projects. These include:

In addition, under the 2009 Federal Solar Flagships program a 250MW CSP project near Chinchilla, Queensland, was nominated for support. The Federal Government would have contributed $464 million towards the estimated $1.2 billion Solar Dawn project costs. This project, like SolarReserve’s, failed to reach financial close.[xv]

While SolarReserve continues to progress CSP projects internationally with a number underway[xvi], but  it also has faced some hurdles with its  flagship CSP plant, Crescent Dunes, at Tonopah in Nevada.  It was the first large molten-salt power tower plant with 10 hours of storage. The 110 MW project began operating in September 2015. Crescent Dunes took four years to build and commission, and ramped up to full output in mid-2016. Unfortunately a leak in one of the molten salt tanks took the plant off line for around eight months.

It was expected to produce 500,000MWh annually (equivalent to just over 40,000MWh per month) which is around 50 per cent capacity utilisation – but to date it has averaged 24 per cent. Its best month so far for ouput equates to a capacity utilisation of around 42 percent (see Figure 4). 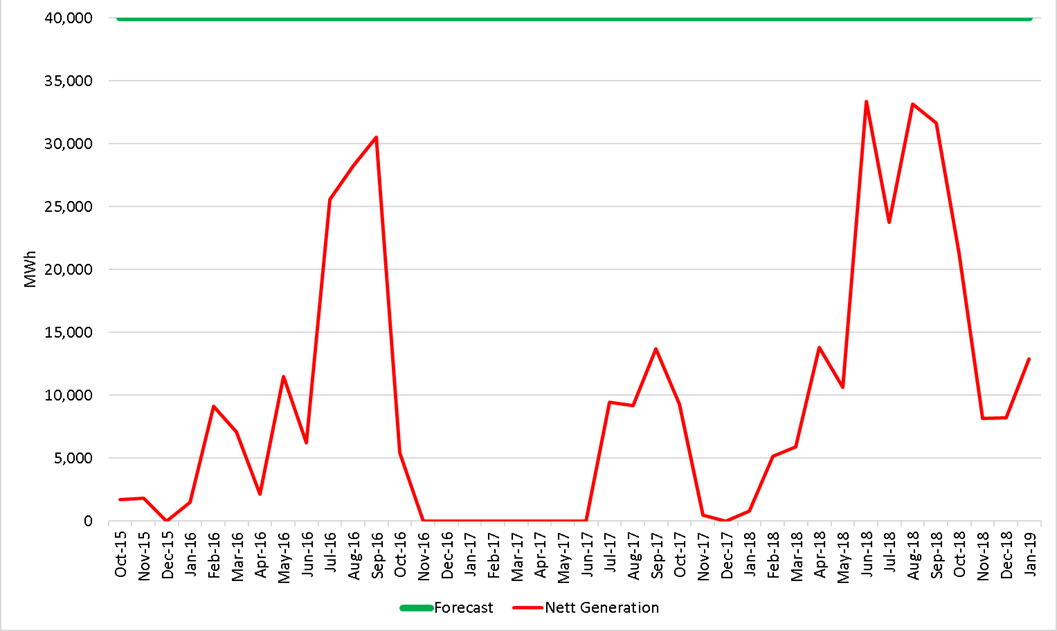 CSP with storage, if it is able to fulfil expectations, not least cost and reliability has the potential to be a real game-changer, given its potential to run as a dispatchable power source and also provide inertia and other ancillary services.  CSP remains an emerging technology type so it is realistic to expect some hiccups as the first few larges plants are developed and operated. It will also likely to continue to need supportive government policies to see it continue to develop.

[iii] A list of projects – both proposed and operational – can be found on the National Renewable Energy Laboratory (NERL) website: https://solarpaces.nrel.gov/  The NERL is part of the US Department of Energy.