South Australia is a world leading pioneer in the integration of intermittent renewables in a constrained grid.  It has now has more than 40 per cent of its generation from wind and solar.  It has also experienced two blackouts inside the past year.  Last Wednesday’s storms resulted in a state wide outage.  As the first independent report emerges from the incident, there is intense focus on what happened and what could have been done, if anything, to reduce the scale of the outage. Energy ministers will be considering the outage on Friday.  What should they consider?

What happened in South Australia?

The restoration of electricity supply started in Adelaide at 7:00pm. By midnight on Wednesday 28 September 2016, 80–90 per cent of electricity was restored.

At the time of the power failure, there was approximately 1,900 megawatts (MW) of electricity being consumed. This was being met by 880MW of South Australian wind generation, 330MW of local gas generation and more than 600MW of supply from Victoria via the Heywood interconnector and the Murraylink DC cable. Figure 1 shows the South Australian energy generation and interconnector moments before the blackout. 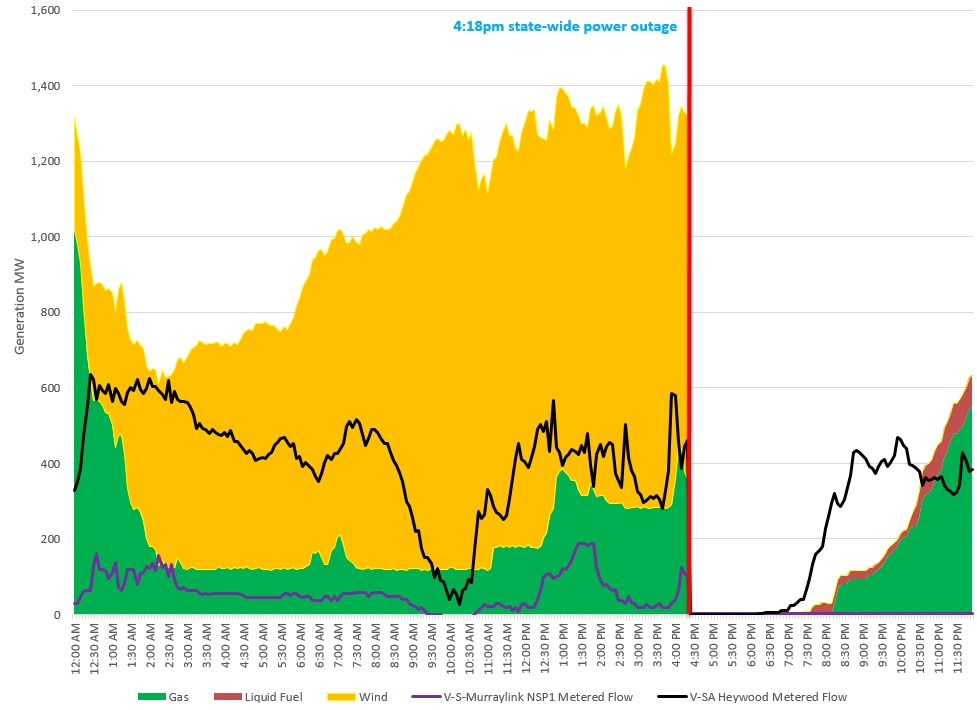 What has happened in the past?

In the past 52 years there have been two state-wide blackouts, including South Australia – the other was NSW in 1964[iii], which was prior to the establishment of the National Electricity Market. This was triggered by an electrical storm.  Of course there have been other weather events and natural disasters that have led to widespread or region-wide blackouts, such in northern Queensland in 2011 following Cyclone Yasi.

It is critical that we understand and learn from what occurred in South Australia so we can manage the transition to a lower carbon electricity market.  There are a range of policy solutions including the way we schedule and dispatch generation in South Australia, to the augmenting of the grid with technologies like extra generation, storage and interconnection.  All will provide different benefits and impose additional costs on consumers.  Given we are only beginning to diagnose the sequence of events in South Australia, it is unclear which, if any, of these is the most efficient solution.

The leading technology solution being proposed by some stakeholders is the construction of a new interconnector between NSW and South Australia. TransGrid has proposed a single circuit 275Kv link from NSW to SA and has estimated the cost to be $500 million. The NSW Government has flagged the possibility of additional electricity interconnection to ease the stress on energy networks[iv].

South Australia is currently connected to Victoria by two transmission lines which allow it to source a maximum of around 23 per cent of peak load from that state.[v] At the end of FY2015, South Australia imported 16.7 per cent of its electricity from Victoria.  Following the closure of the coal-fired Northern Power Station on 9 May 2016 the interconnector is playing an increased role in meeting the state’s power needs.

Interconnectors move energy from one region to another.  In the case of a SA-NSW interconnector, it would be a long life asset whose primary role would be to move electrons from firm, high emissions (coal) power stations in NSW to SA.  The intent of an additional interconnector would be to provide additional and alternative firm supply in South Australia and provide ancillary services.  These benefits should be considered against the potential risks:  Specifically a second interconnector could:

An extra interconnector could cost from $500-3,750 million on recent estimates.  Figure 2 illustrates the cost estimates of previously proposed interconnector projects. The cost of interconnectors is relatively high in Australia as the distances are great and the size of the participating markets are small.  As a result progress on building interconnectors has been slow over the past decade.

Figure 2: Projected and Final costs for the construction of interconnectors

The 28 September blackout in South Australia was a significant event which requires careful review and a considered response. Australian governments have form in reacting quickly to blackouts with expensive and inefficient solutions: blackouts in NSW and Queensland in 2004 resulting in big increases in reliability standards or “gold plating” of the networks; blackouts in Western Australia in 2005 resulted in an expensive and inefficient capacity payments system.

South Australia is a world leader in the integration of intermittent generation, and the lessons it learns should influence how we decarbonise the world’s electricity systems.  The storms knocked out key transmissions lines in the state’s mid-north which resulted in a sudden loss of generation which could not be covered by remaining generation sources.

More detailed analysis is still to be completed on the blackout.  It is likely to inform improved grid management and operational responses and identify what types of infrastructure would augment a high intermittent generation grid.

The preliminary AEMO report provides clarity around the sequence of events that occurred, but also reveals the need for more detailed information to fill in some of the blanks that will help improve system security into the future.

It reinforces that we may need to think differently about the potential effect of extreme weather events, as we operate a more weather-dependent electricity system.

[ii] The restart of wind is unlikely to have occurred, according to market participants, because of the difficulty in returning the transmission lines online and has been removed from the chart.