Interconnectors: Is there a link between Europe and Australia?

Denmark's interconnector capacity with its European neighbours is equivalent to the Danish peak-load demand, in contrast to the renewable experiment in South Australia. South Australia is connected to Victoria by two transmission lines that allow it to source approximately 23 per cent of its peak load[i] from Victoria. In 2014-15 the state imported 16.7 per cent of its electricity from Victoria, although following the recent closure of the Northern Power Station the interconnector could become even more important.

Interconnectors are a key component of most European energy portfolios. The interconnection of European countries plays a vital role in maintaining the energy balance and security of supply across the region. And with intermittent renewable capacity growing in Europe, interconnectors are expected to play an increasingly important role.

Fluctuations in renewable output, particularly in Denmark and, more recently, in Germany, will need to be supported by generation flexibility from neighbouring markets. Figure 1 below shows the flows between the European countries. Flows from flexible hydro capacity, baseload nuclear generation, gas and flexible thermal capacity will be critical to maintaining system balance. 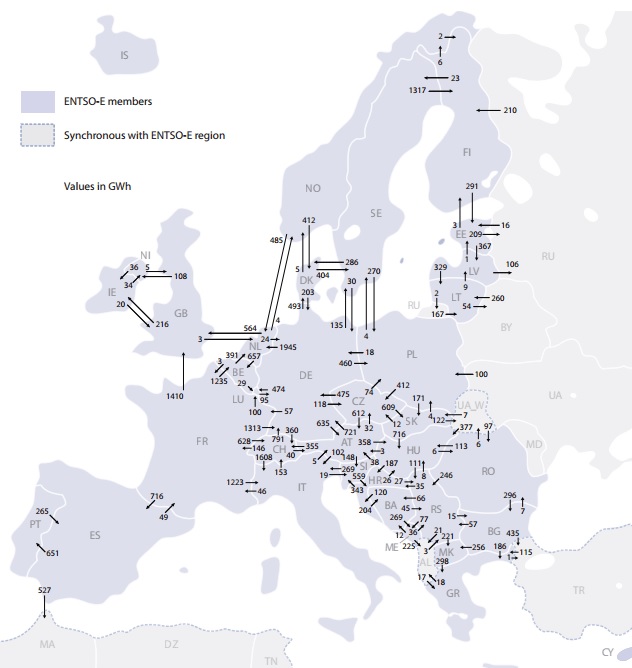 Although the sample is for May 2014, it highlights the exporting status of France. It also shows the dynamic change in direction of some flows, with countries shifting from being net exporters to becoming net importers, most notably in high renewable and hydro generation. In May 2014, Denmark exported 612 GWh, but imported 1,191 GWh compared to France, which exported 6,625 GWh and only imported 301 GWh. The key drivers of the direction of flow would rely on:

In some cases the flexibility embedded in some types of projects is what drives most of their value. Gas-fired plants are valuable because it is easier to ramp up or ramp down according to the level of market prices. France typically exports low cost baseload power generated from its nuclear plant to its neighbours. Germany, in particular, is likely to become more reliant on this interconnector as it continues its Energiewende policy that seeks to replace fossil fuel and nuclear generation with renewables. In 2014, electricity from fossil fuels (including gas) hit a 35-year low[iii]. Generating capacity in October 2014 was around 177 GWe, comprising 12.1 GWe nuclear, 5.6 GWe hydro, 35.6 GWe wind (0.6 offshore), 38.1 GWe solar, 28.4 GWe gas, 21.2 GWe lignite, 27.8 GWe hard coal and 5.6 GWe biomass, according to the Fraunhofer Institute, a European solar research group[iv]. Figure 2 below shows the electricity production per capita by fuel type across the EU.

Figure 2: Electricity production per capita by fuel type in the EU 2013[v] 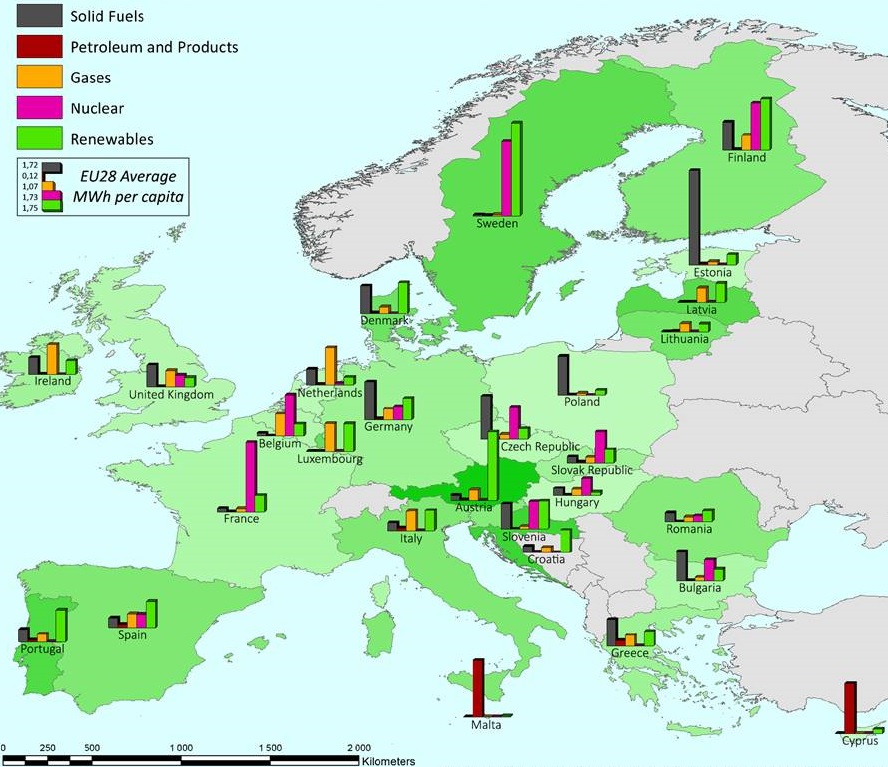 Comparison to the National Electricity Market

Across the National Electricity Market (NEM) there are six interconnectors linking five states across Australia[vi], compare this to Germany, which is connected to eight countries. When considering Australia and Europe, South Australia and Denmark sit amongst the highest per capita wind generators. Wind generation across South Australia and Denmark account for approximately 40 per cent of their total generation; Figure 3 below shows the growth in the share of wind in Denmark.

Figure 3: Share of wind energy of the total electricity consumption for Denmark[vii]

The Danish energy system can cope with the variability and uncertainty of its large share of wind power due to its close interconnection with Germany, Norway and Sweden. This could increase given that by 2022 another interconnector has been proposed - the Viking Link is a proposal to build a interconnector between the UK and Denmark. Regardless, the current interconnections in Denmark allow it to source the equivalent of its peak load from other countries.

Two illustrative days in 2015 show how some countries can vary between import and export. On 9 July, Denmark’s wind turbines produced 140 per cent of its electricity needs making it a net exporter, while on 9 September when the wind was not available it was a net importer. This though occurred in another six countries which have both high share of hydro and wind generation. This shift in energy flows can be seen in Figures 4 and 5. 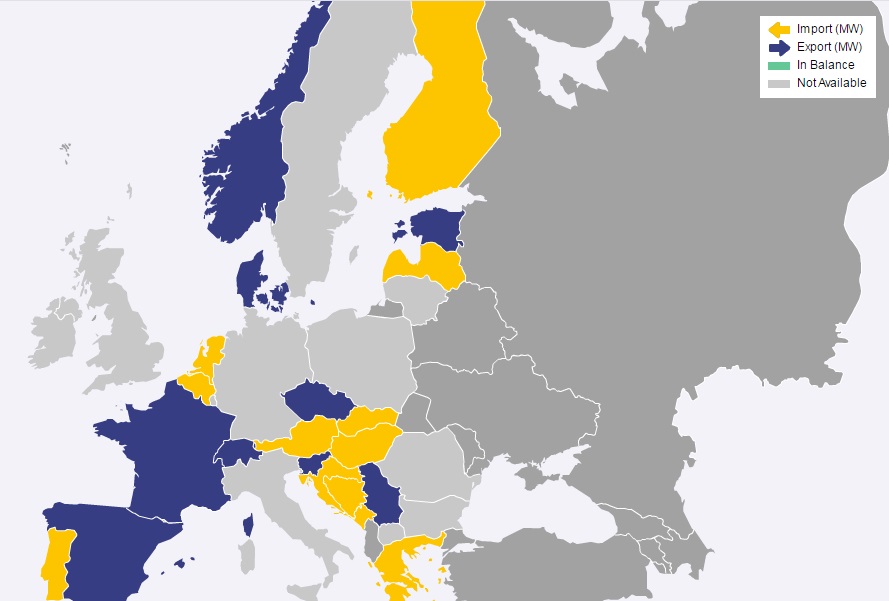 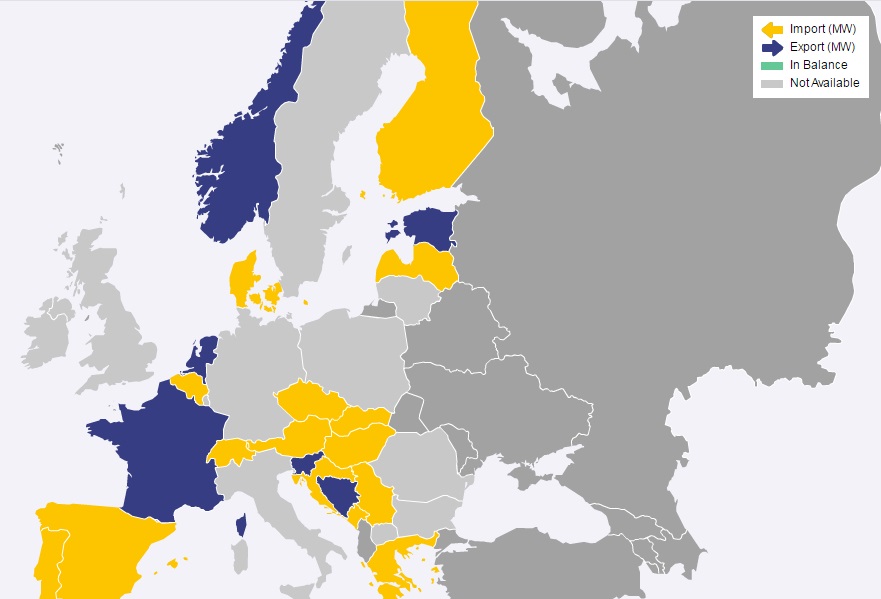 By contrast, the South Australian renewables experiment is more significant given the grid is more constrained. South Australia is connected to Victoria by two transmission lines which allow it to source a maximum of around 23 per cent of peak load from Victoria.[x] As at the end of FY 2015, South Australia imported 16.7 per cent of its electricity from Victoria, but following the closure of the coal-fired Northern Power Station on 9 May 2016 the interconnector could become more vital to meeting the state’s power needs. 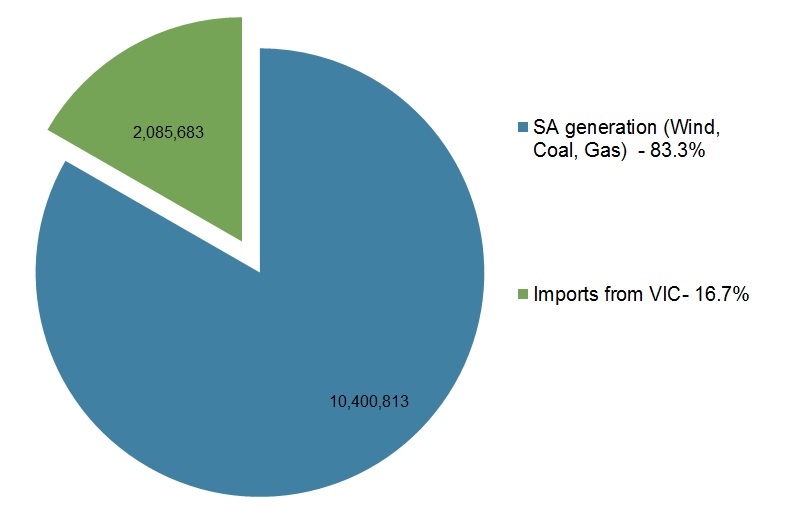