If there is one thing the Australian Energy Regulator’s (AER) State of the Energy Market report has reminded us, it’s that the National Electricity Market (NEM) can be a wild ride at times.

After a mild summer and low demand helped the NEM achieve the lowest first quarter wholesale prices since 2012, tight supply - due to plant outages, reduced operations, increased fuel costs and higher demand - led to increased price volatility over the past couple of months.

Despite these recent price spikes, the number of negative price events is a trend that has become increasingly noticeable in the NEM in the past couple of years.

There were 3662 instances in 2020 of negative prices – a record – and triple the number seen in 2016. And the high level of negative prices was also noticeable in the first quarter of this year. The trend since 2016 is highlighted in figure 1 below: 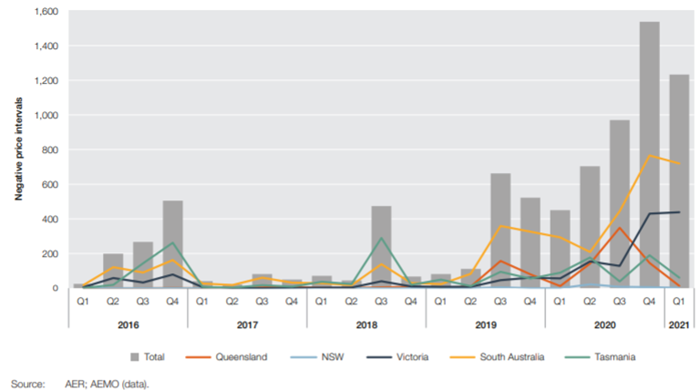 A key factor behind this trend is the increased capacity of renewable generation entering the grid. Typically, they will be competing with each other at the same time which helps drive down prices significantly when the sun is shining or the wind is blowing and demand is low. This is noted by the AER:

“With multiple generators of similar technology competing for dispatch, the likelihood of negative prices increases. Negative prices tended to occur when electricity demand is low and weather conditions are optimal for renewable generation”.

While this was more noticeable overnight historically, another development is that it is becoming more common during the day. In South Australia, for example, which reported negative spot prices 16.8 per cent of the time in the first quarter this year, the average spot price during peak solar production times (between 10am and 3:30pm) was negative $12/MWh.

Overall, in 2020 nearly half of all negative prices occurred in South Australia which reflects its high levels of wind and solar generation. More than 40 per cent of the negative prices last year were in the fourth quarter, exceeding the preceding quarterly record that was set in the third quarter.

During the first quarter this year negative and zero spot prices were seen 5.8 per cent of the time of all trading periods (up from 2.3 per cent in the corresponding period last year). Negative spot prices occurred in the NEM’s southern states and at very high levels in South Australia (16.8 per cent) and Victoria (10.3 per cent). The Australian Energy Market Operator (AEMO) reports that while the negative prices led to a $10/MWh drop in South Australia’s average quarterly price, they had minimal influence on Victoria’s wholesale prices which were just $1.9/MWh lower, which is attributed to the lack of any trading interval when the state’s spot prices were under -$100/MWh.

Key drivers of increased negative prices in SA and Victoria in the first quarter, according to AEMO, were:

The NEM has a market floor price of -$1000/MWh and allowing generators to offer capacity at negative prices increases their chances of being dispatched. Generators will offer this capacity because it may be more cost-effective to offer capacity to ensure continuous operation. In the case of a baseload generator, for example, they will have a minimum on-line loading level so may stay on to avoid the costs of having to shut down and restart. A generator’s hedge contract position may also determine how it bids. If a generator has a contract ahead of time that ensures a fixed price for its output, it may only be minimally exposed to negative prices[i].

Renewable generators who are accredited for every MWh they produce via Large Generation Certificates (LGCs) under the Renewable Energy Target, may also be able to operate profitably even with negative prices.

Commercial PPAs with renewable generators may have a clause that they don’t pay out when the wholesale price is less than zero, which protects the buyer against these outcomes.

The market operator has reported that high levels of negative prices in the past two quarters has led to an increased response from wind and solar farms in the form of re-bids of their capacity to higher price bands.

The increase in re-bidding has also been driven by the introduction of rebidding software with AEMO estimating around a third of South Australia and Queensland renewable generating capacity now has the software, while around a fifth of the capacity in Victoria use this software.

In the first quarter 2019 South Australia and Victorian wind and solar farms re-bid 4258 times and by the comparable quarter this year there were 34,659 re-bids, a 713 per cent increase.

Negative spot prices also contributed to increased self-curtailment of output in the quarter (averaging 61MW, up from 42MW in the same quarter in 2019) with the largest regional increases in economic curtailment seen in Victoria and South Australia. In the first quarter this year economic curtailment accounted for 58 per cent of total curtailment. Economic curtailment is where a wind or solar farm’s output is reduced from what it could produce based on the weather conditions.

In March this year the Australian Energy Market Commission introduced a rule change requiring semi-scheduled generators to generate based on the available resource and their offers and not turn off without instructions from the market operator.