How to amp up EVs

Part of Labor’s rationale is that we lag behind other countries in supporting EVs and hence their take-up. In its policy announcement the ALP said that while EVs have a global market share of around 2 per cent, the share in Australia is only 0.2 per cent.

Key elements of Labor’s proposal are:

So how do these measures stack up? Below we look at the uptake of EVs globally and the measures put in place in the leading countries to encourage their further development and increase their market share.

The International Energy Agency has noted that “supportive policies and cost reductions are likely to lead to continued significant growth in the EV market[i]”.  And governments internationally have been introducing EV targets (figure 1) and/or are supporting them through government incentives, emission regulations, and low and zero emission vehicle mandates.

Figure 2: Electric vehicle targets of selected markets and how it compares to Labor’s Target 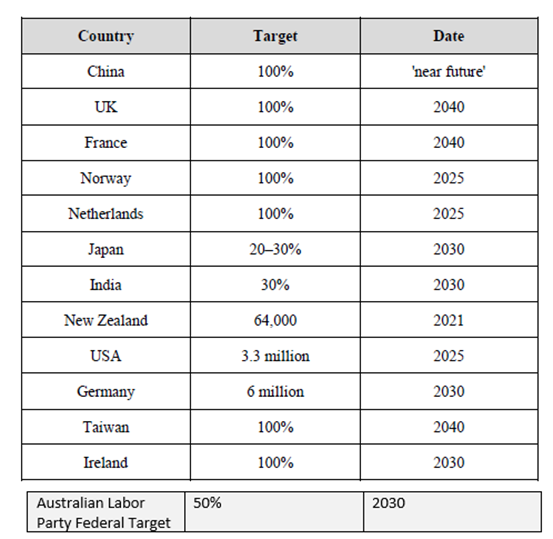 In terms of market share of EVs Norway leads the way (39 per cent of new car sales), followed by Iceland (11.7 per cent) and Sweden (6.3 per cent).  McKinsey & Co has created an EV index that shows the national trends and changes over the past few years (see figures 2 and 3 below). 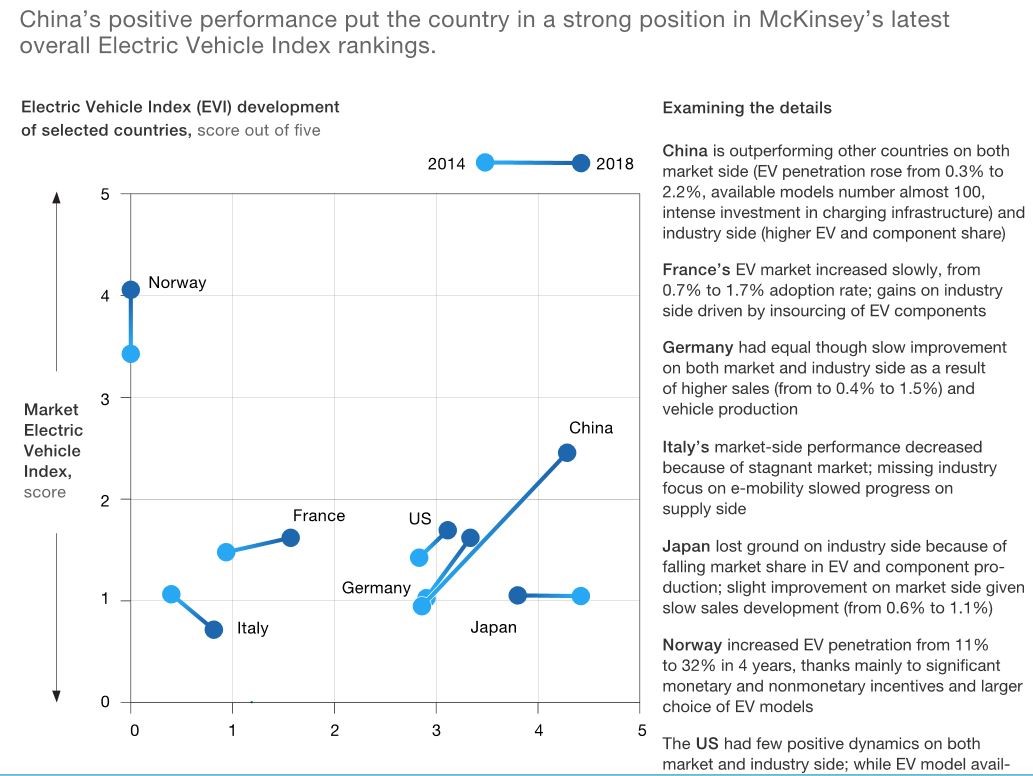 McKinsey notes that China is outperforming other countries on both the market side and industry development side. It notes that Norway’s increase in EV penetration from 11 per cent to more than 30 per cent in just four years is due to significant monetary and non-monetary incentives and a larger choice of EV models.[iii]

Figure 4 gives a quick look at some of the measures being undertaken by various countries. We then look in more detail at some key countries. 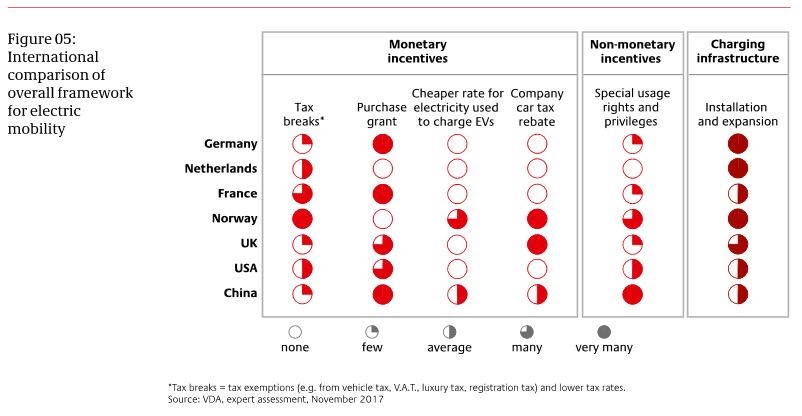 As a world leader in EV uptake, Norway aims for all new cars sold by 2025 to be zero emission (electric or hydrogen). By the end of 2018, Norway had 200,000 registered BEVs and 10,000 publicly available charging points. According to the Norwegian Electric Vehicle Association 58.4 per cent of new cars sold in March this year were battery-powered. EV’s share of the market in the first three months of 2019 was 48.4 per cent.

China adopted formal policy in 2009 and incentivised government fleet purchases, taxi operators, amongst other fleets. Monetary incentives and purchase tax exemptions were then established for private EV buyers, as well as incentives, such as the use of bus lanes and reduced road tolls[v].

China’s key policy supports for NEVs include reduced taxes, direct subsidies to manufacturers, consumer subsidies, mandated government procurements, and industrial policy. As early as 2008, China’s Ministry of Finance and the Taxation Services General Office announced that NEVs would be exempt from the standard consumption tax on new cars. [12]

China has provided billions of dollars in direct subsidies to manufacturers. For example, Shenzhen-based manufacturer BYD received US$435 million in subsidies between 2010 and 2015. In addition, as part of China’s 2012 “Energy-Saving and New Energy Vehicle Industry Development Plan (2012–2020),” the central government allocated over US$15 billion to support the development of energy-efficient vehicles and NEVs, pilot car projects, and electric vehicle infrastructure. [13]

In September 2017 China finalised a new energy vehicle mandate to take effect for two years from April 2018.  As a result from this year car makers are required to have 10 per cent of their sales as new energy vehicles and this will rise to 12 per cent in 2020. This applies to car makers that produce or import 30,000 conventional vehicles annually. If they don’t meet the targets they either have to buy credits from other car makers or pay a fine.

On 1 January 2017 China revised its subsidy program for zero emissions vehicles (BEVs, PHEVs, FCEVs) which are valid to 2020. Subsidies for passenger vehicles reduced by 20 per cent in 2017-2018 from 2016 levels and then reduce by a further 20 per cent in 2019-2020. The subsidies are indexed to car range and battery energy density for EVs. For fuel cell cars the subsidy is linked to power rating. This is shown in Figure 5. 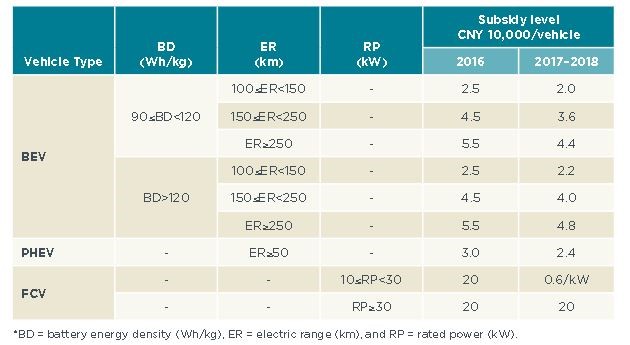 Numerous subsidies at EU, federal, state and local level support the further development of electric mobility in Germany. The support measures are based on Germany’s Electric Mobility Act, which came into force in July 2015 and a Cabinet Resolution on 18 May 2016.

More than two thirds of all new electric vehicle registrations up to October 2017 were fitted with the special “E” number plate for electric vehicles. The advantages conferred on electric vehicles by the Electric Mobility Act – such as parking privileges, special access rights and special usage rights – create a framework for making electric mobility more attractive at local level.

The US’s aim of 3.3 million by 2025 is being driven by nine states. On October 24, 2013, the governors of California, Connecticut, Maryland, Massachusetts, New York, Oregon, Rhode Island, and Vermont signed a memorandum of understanding (MOU) committing to coordinated action to ensure the successful implementation of their state zero-emission vehicle (ZEV) programs. They released a Multi-state action plan in May 2014 and a subsequent plan was released last year[vi].

Key elements/recommendations include support for promotion of ZEVs, development of charging infrastructure, financial and non-financial incentives for the purchase and lease of ZEVs.

France and the UK will ban sales of new petrol and diesel cars by 2040. The French Government has set a goal of increasing EV sales fivefold by 2020 and offers incentives such as purchase subsidies and tax-breaks. While last year the UK unveiled their Road to Zero Strategy, a 46-point plan to manage the transition out to 2050. It details how the government will support the transition and reduce emissions from conventional vehicles during the transition. The UK has over 16,000 public charging points, and the government has established a 400 million-pound fund to extend the charging network. UK plug-in vehicles buyers are also eligible for grants of up to 4,500 pounds[vii].

The Federal Government has unveiled its net zero emissions by 2050 target and projections for economy-wide emissions. The projections show the heavy lifting that's occurred from the electricity sector and flags the continued leading role the sector will play in reducing the country’s greenhouse gas output. But it also shows more needs to be done by other sectors to reach its 2050 target.