How competitive is the NSW wholesale electricity market?

In its interim report last year, the Australian Consumer and Competition Commission (ACCC) raised concerns about the highly concentrated nature of the National Electricity Market (NEM) which it said was ”likely to be contributing to higher wholesale electricity prices”.  As the final report is due to be released in July, we examine this claim with a detailed look at the NSW wholesale market.

The NEM was created in the 1990s through the physical and financial linking of four previously independent state electricity grids (NSW, Victoria, Queensland and South Australia).  Tasmania joined in 2006 when Basslink was commissioned.  Prices are set regionally in the NEM, with each state reporting its own spot price, which is in turn influenced by the interconnector flows from its neighbours.  The NEM was created as a key plank in the Competition Policy reforms of the Keating Government, with the support of the states.  This was to drive the benefits of competitive markets into the government owned monopolies that ran the electricity system.

Privatisation of the NSW assets was commenced by the Keneally Labor Government in 2008 and completed with the sale of the Vales Point power station in 2015.  The ACCC opposed the sale of Macquarie Generation to AGL in 2014, but this was overturned by the Australian Competition Tribunal.

Since then more than 1000MW of new solar and wind generation has been built in NSW, with another 1000MW scheduled for completion by 2020.

There are two types of generator market share – capacity, which is how much a generator is capable of producing, and energy, which is the amount of energy produced (over a year).  For our analysis we have deviated from the method used by the Australian Energy Regulator in two ways: we have separated out generators under contract to other firms and have presented interconnectors at their nominal capacity. 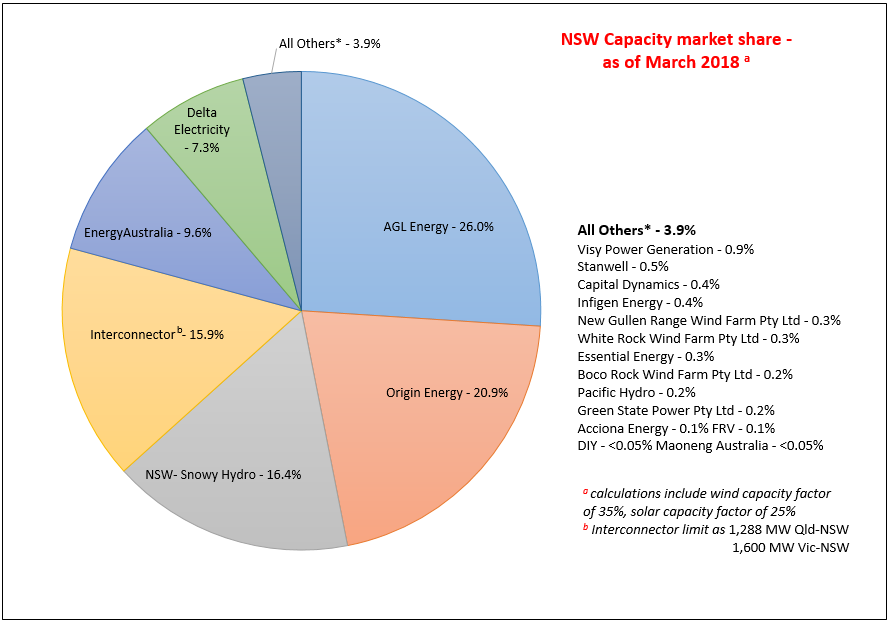 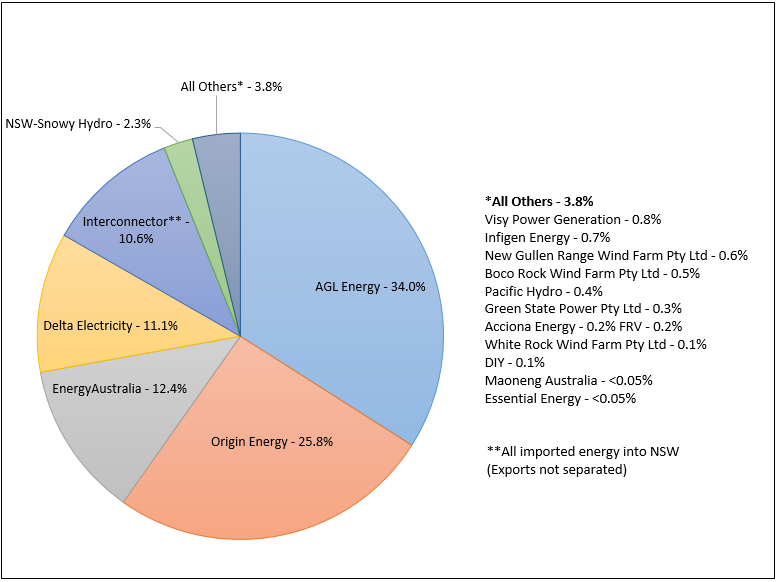 Like the AER, our numbers show AGL is the largest generator in NSW by both capacity and volume.  There are five large generators, with the interconnectors providing an additional large source of competitive supply.  Snowy Hydro has been included as a major competitor because it has significant capacity which can enter the market quickly, so it has a significant impact on the competitiveness of the market.  There is also a growing share of smaller renewable generators who are supplying the market.  Based on the recent forecasts by the Clean Energy Regulator, this share of generation is expected to increase into the future. 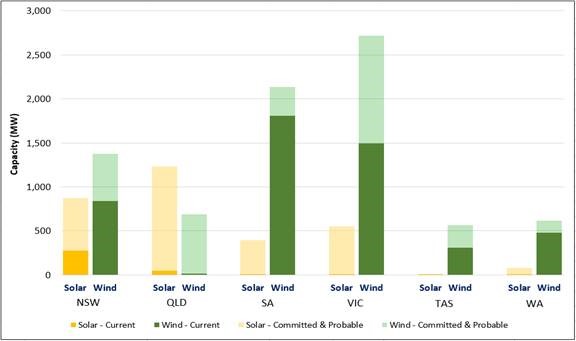 Key to the NEM’s competitive construct is its open access arrangements that allow new entrants to build and connect almost anywhere and the NEM is experiencing an unprecedented rate of entry at present. Increased investment in wind and solar can be expected to further increase competition and reduce concentration in generation markets.  Renewable generators are smaller, more modular and pose less commercial risk because of their shorter build time and operational lives.  This reduces the barriers to entering the generation market.  It also enables smaller, vertically integrated gentailers to develop (e.g. Powershop/Meridian and Pacific Hydro).  While many of the existing renewable projects will have contracted their offtake to existing large retailers (because the retailers need both the electrons and the renewable certificates), there is still increased competition in the bidding and tendering phase of these projects, and some renewable projects, such as Woodlawn Wind Farm, have chosen not to contract their offtake in this way.

Independent review of the market

Late in 2017 the Environment and Energy Minister Josh Frydenberg asked the Australian Energy Regulator to investigate and report on sustained increases in the NSW wholesale price following the closure of the Hazelwood power station in Victoria in March that year.  The AER found a step change in the (higher) prices for electricity being bid into the market.  The AER reported a number of causes.  First was the increased price of coal, and continuing problems with coal supply as a result of both rail access constraints and shortages in coal supply.  Generators were managing their generation to protect coal stockpiles for periods of high demand.  At the same time, gas prices were also higher in NSW.  These factors contributed to the bidding behavior of generators.[i]

The AER noted the composition of generation market, but did not observe opportunistic bidding normally associated with the exercise of market power.  What the AER did observe following the closure of Hazelwood and the loss of capacity was the reduced ability of lower cost Victorian brown coal generators to export to the same extent into NSW and bring prices down.

The future of the Liddell Power station and the proposed expansion of pumped hydro in NSW (Snowy 2.0) have been widely discussed in recent months.  AGL purchased Liddell as part of its purchase of Macquarie Generation in 2013.  At the time of the sale, Macquarie Generation reported that Liddell had an accounting useful life until 2022[ii].  AGL recently rejected an offer by Alinta Energy to purchase Liddell.  It intends to close Liddell in 2022.  Whether AGL closes Liddell or sells it, the level of market concentration falls significantly. If Liddell is removed from the above graphs, AGL becomes the second largest generator in capacity and energy terms.

The NSW generation market is one of three regional markets in the NEM that have been privatised (Victoria, NSW and SA).  Technically the most concentrated generation markets are exclusively government owned (Tasmania) or largely government owned (Queensland and Western Australia).  NSW is an important market, and a useful test case for the nature of competition as the electricity sector continues to evolve away from large, capital intensive long life assets to smaller, more modular and shorter life generation assets.

The NSW market has an unremarkable concentration of generation when compared to similar sized international markets.  Market concentration is likely to diminish further with the growth of renewables and the closure of Liddell.  Independent reviews do not identify market power being used to increase prices, but there are also warnings about how these markets will respond to further changes in generation.

What the ACCC has identified as important is that the wholesale market provides retailers of all sizes access to competitive pricing and risk management products.  How do we minimise price volatility in the future as we substitute new lower emissions generation for retiring older thermal generators?  While there is no evidence the existing market structure is the problem, there are real challenges to ensure generation investors get adequate returns to be able to invest in the new electricity grid and competition in retail and wholesale electricity markets is maintained.

As Australia’s electricity sector decarbonises, we are likely to see further exit of large coal generators replaced by new competition from smaller renewable generators, firmed by gas or other technologies.  On current trends, increased concentration of large thermal generation capacity is inevitable.  But overall competition is likely to increase as barriers to entry fall.