After low first quarter prices in the National Electricity Market (NEM), concerns about price spikes have taken centre stage more recently with price volatility due to factors like supply tightness with operational issues at dispatchable plant in Queensland and Victoria.

There have also been high gas prices more recently with reports of average Victorian gas prices reaching 10-year highs. That has been brought on by a series of events - cold weather has played a part along with the operational issues at Callide and Yallourn and gas being required to help fill the generation gap. On the supply front, production has been down from the Longord plant in Victoria putting pressure on other supply sources, such as the Iona gas storage facility in the state’s west[i].

In May there were high priced events which led to familiar questions about what is behind the changes. One small retailer Enova even approached the Australian Competition and Consumer Commission (ACCC) asking it to investigate the price spikes.

The Australian Energy Regulator (AER) is already required to look at high priced events and report on the factors that contribute to prices going above $5000/MWh (the market cap price was $15,000/MWh until 30 June this year and is now $15,100[ii]). The AER’s detailed reports provide insight into the workings of the market, and the many and varied factors that can impact prices. Below we take a look at three recent events – 17,18 and 21 May - and the AER’s recently released assessments of what was behind them.

On 17 May the spot price in New South Wales (NSW), Victoria and South Australia (SA) was $5,844 for the 6pm trading interval. The following day the spot price in the three states was $6,043MW/h and $7,492/MWh for the 6pm and 6:30pm trading intervals respectively. Prices had actually been forecast to be $15,000/MWh for all the high priced intervals but were below $7500/MWh.

The tables below show the forecast and actual prices for 17 and 18 May.

On 21 May the spot price in NSW was above $5000/MWh for the 5pm and 5:30pm trading intervals. Prices were actually forecast to be higher from midday on the day. 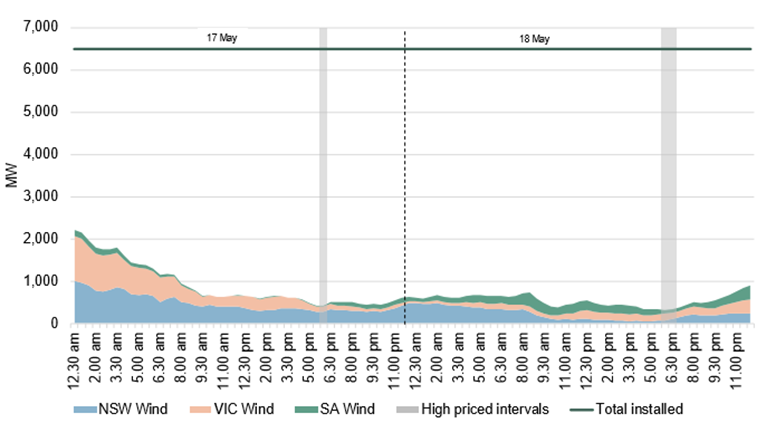 The AER notes that rebidding into higher price bands was not a factor. 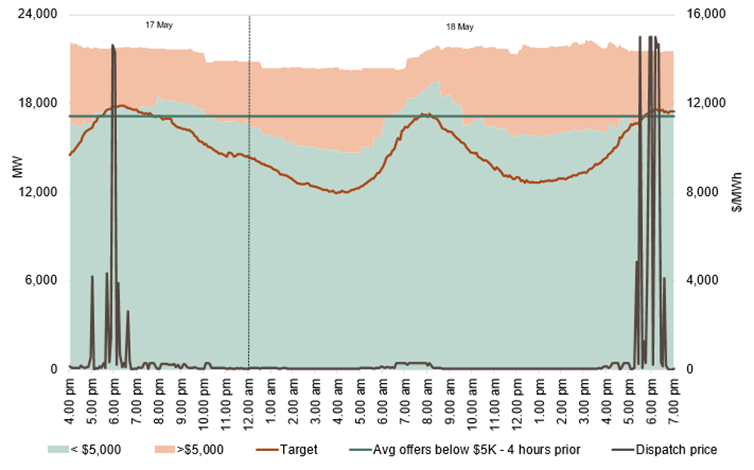 For the 21 May high spot prices the AER found the main drivers were similar to those for the earlier days with reduced supply and higher demand.

The NEM has been described as a giant machine which operates from SAto Queensland and also incorporates Tasmania via the Basslink interconnector.  Within the NEM electricity is generated and moved within and between regions and states, via interconnectors that link the grids in the five eastern seaboard states and the ACT. It is one of the world’s largest interconnected power systems.

It operates very efficiently, but as with any complex system (and as the latest reviews of recent high price events illustrate) variations will be reflected in fluctuations in the wholesale market price, which signals swings in the supply-demand balance at any point in time. If anything, we can expect the complexity of this interconnected system to increase as the grid transitions to lower emissions.