Texit: What has the NEM ever done for us?

Earlier this month the Tasmanian Government announced it was planning to exit the National Electricity Market (NEM).  The announcement attracted significant media attention, with the Sydney Morning Herald declaring “Tasmania wants to leave the national grid”. Why not? We look at what the NEM has done for Tasmania, and what Tasmania has done for the NEM.

The NEM was created in the 1990s as a central plank of competition policy reform in Australia: opening up government-owned regulated monopolies like electricity to competition to deliver greater efficiency and cheaper energy for consumers.

The NEM is two parallel systems: first there is the physical NEM, a giant machine which operates from the west coast of South Australia to the far north of Queensland.  It also incorporates Tasmania via the Basslink interconnector, which was switched on in 2005.  The physical NEM generates and moves energy within and between regions and states, using interstate interconnectors to link the grids of the five eastern seaboard states and the ACT.

The second NEM system is the operation of markets in each jurisdiction which set the spot price for electricity.  These markets operate around the clock, with prices often fluctuating significantly as the market uses price to signal to generators demand for supply at any given time: high prices signal demand for more generation, low or negative prices signal to generators to exit or reduce output. These fluctuating prices are smoothed out through contracts between generators and retailers, and ultimately flow through to customers through retail .

While the language around the Tasmanian exit of the NEM (Texit) may have been conflated by some observers, it is clear from the Tasmanian Government’s statement that they are planning on Tasmania exiting only from the contracting part of this price setting feature of the NEM.

The importance of the physical NEM to Tasmanians

Tasmania is blessed with around 2,300MW of hydro generation.  Hydro electricity is the “dream team” of modern electricity systems, providing dispatchable, zero-emissions generation.  In Tasmania it rains electricity.  Prior to the creation of the NEM and the interconnection with the mainland, Tasmanian electricity supply experienced cycles of feast and famine.

In wet years, water was sometimes spilled from the network of dams because it couldn’t be used.  Similarly during droughts electricity was scarce.  During the 1967 drought, Tasmania burnt large amounts of oil at Bell Bay power station and had to impose crippling electricity restrictions on industry. The 2006-7 drought was perhaps more severe, but by importing power from the NEM, Tasmania did not have to impose any customers restrictions and expensive fuel burn was very limited.

While Tasmania can act as a battery for the mainland, the mainland can also act as a battery for Tasmania.  The importance of this balancing role was highlighted when a period of low rainfall in 2015 was followed by a fault in the Basslink cable.  The critical nature of the 2016 shortage and the measures taken to mitigate its impacts were amplified because Tasmania temporarily had no access to the NEM.

The co-operative relationship between the mainland and Tasmania can be seen in the varying levels of electricity imports and exports since the Basslink came into operation.  During periods of drought the connection to the NEM was crucial in augmenting Tasmania’s electricity supply.  Increased rainfall allowed Hydro Tasmania to take advantage of market conditions in Victoria and sell more electricity into the mainland. 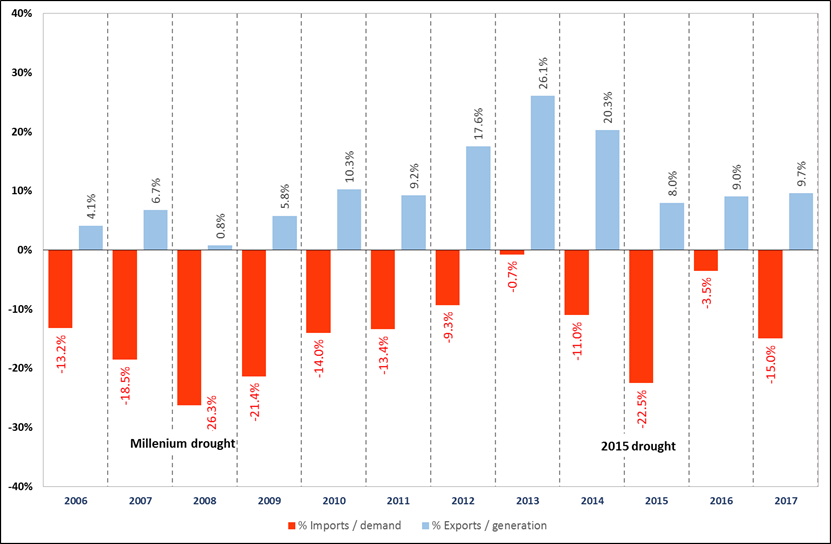 Hydro Tasmania has also been able to establish a successful mainland retailer, Momentum Energy, supported by their Tasmanian generation business and the NEM’s open access rules.  It has also enabled the construction of two Tasmanian windfarms, by ensuring that the energy produced can always find the highest value.

The NEM trading market and Tasmania

Opening up electricity supply to competition has many benefits:  it enables more efficient and dynamic pricing, which has translated to better pricing, particularly for commercial and industrial customers.  The competitive markets in the NEM signal both operational efficiency and signal the need for new investment and redundancy.  This means private investors are able to raise finance for new capacity, freeing up public money for other uses.

Competitive markets have worked elegantly and efficiently in Australia.  The current supply scarcity is not because the NEM hasn’t worked, but rather because a new investment risk has emerged – climate change – which has not been monetised by government policy.  In the absence of durable climate and energy policy, investors are unable to have enough confidence about the likely returns for new capacity.

In Tasmania the benefits of competition are yet to be realised.  The Tasmania Government owns Hydro Tasmania, and the nature of Hydro’s business makes it more challenging to break up than other types of generation.  While competition has been introduced into Tasmania’s retail market, this has been dulled by the lack of competition in the wholesale market.

So the impact of the Tasmanian Government on decoupling the state’s contract market pricing from the NEM is not radical, formalising an existing implicit relationship.  In essence by formally regulating the wholesale contract price the Tasmanian Government is simply fixing the rate of returns it will receive from Hydro Tasmania.  Such a decision could stifle competition in the Tasmanian market, except there isn’t much to stifle.

The real concern about Texit

The real issue with the Texit announcement, the way it was framed and broadly endorsed across the political spectrum is not its detail.  It’s the perception it creates that the NEM is somehow a bad thing that has harmed Tasmania.  This is an unhelpful and potentially dangerous message to promulgate.

The creation of the NEM has been an important and valuable benefit to Australian electricity consumers.  The deregulation and privatisation that have followed have encouraged competition and freed up scarce government capital to be spent more effectively.  Competition is not a problem - it’s a solution.  These microeconomic reforms have underpinned Australia’s remarkable economic performance over the past two decades.  Demonising and politicising these important institutions is a slippery slope, not unlike that which the citizens of the UK find themselves on following the Brexit vote.