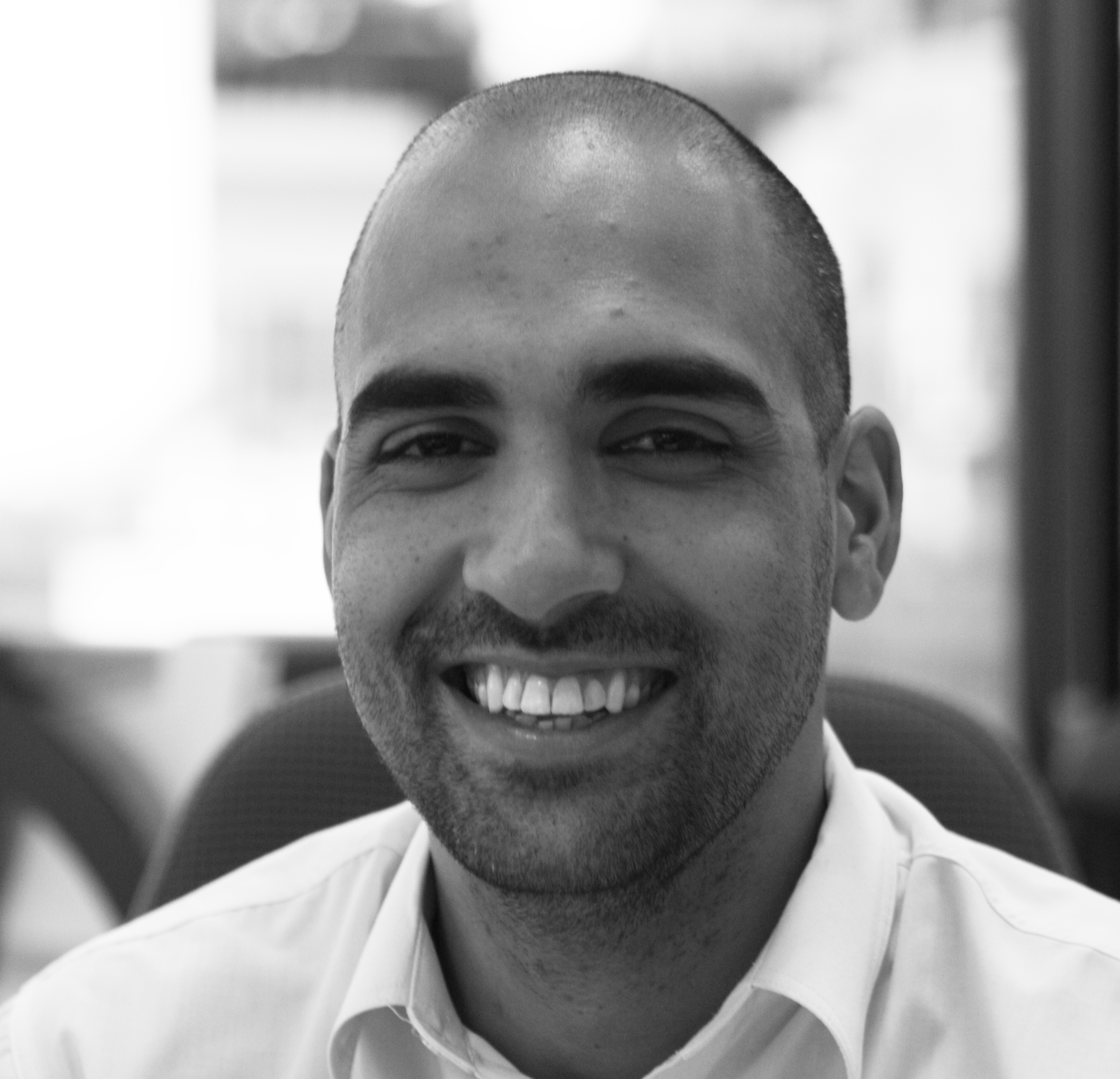 The number of high priced events have been under the spotlight recently with commentary about the impact of renewable generation on prices, including suggestions that renewables have helped dampen high prices in the National Electricity Market since 2010-11. We take a look at the main factors contributing to historic high price events and more recently, the factors that have led to recent high prices in South Australia and Queensland. Figure 1 shows the number of times spot price spikes exceeded $5000/MWh in each region since 2007-08. 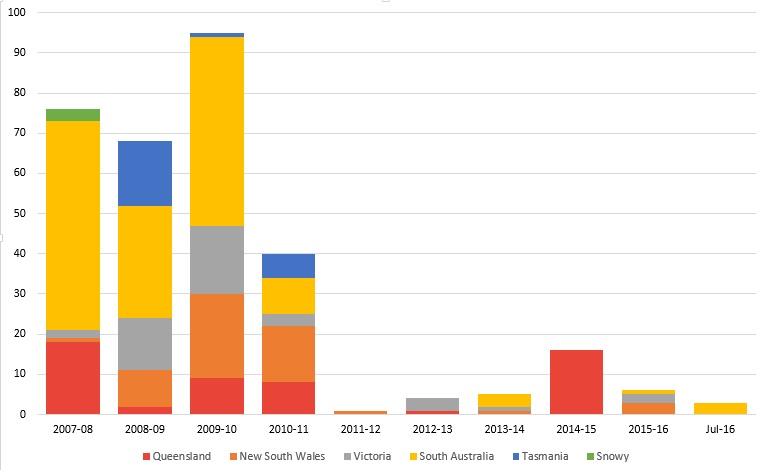 As highlighted in figure 1, the price spikes above $5000/MWh have declined significantly since 2010-11. Queensland saw large price spikes in the summer of 2014-15 and, more recently, South Australia in the last month. The drop in the number of high priced events can be attributed to a decline in demand from 2008-09 and increased surplus generation. Figure 2 highlights the drop in demand since its peak in 2008-09. All high price events since 2007-08 can be found in Appendix 1. 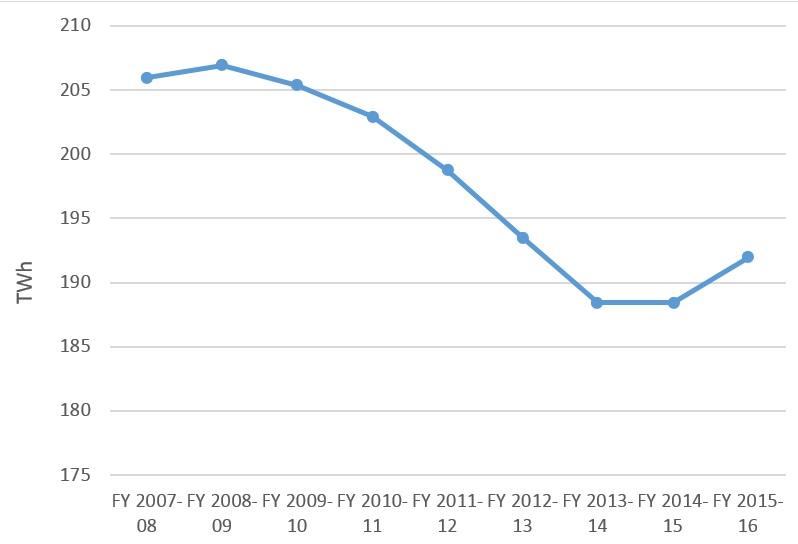 Demand grew fairly consistently until 2008-09. The growing number of air conditioners and increased number of residential households meant that peak demand grew faster than overall demand. The effects of increased energy efficiency, decreased industrial demand and the uptake of residential solar panels resulted in demand decreasing from 207 TWh in 2008-09 to 188 TWh in 2014-15.

Over the same period, while demand was declining, generation capacity continued to grow due to the help of federal and state schemes. The Renewable Energy Target (RET) allows eligible participants a fluctuating price for each MWh of renewable energy which is generated called a Large-scale Generation Certificate (LGC). The average price of LGCs last week was $85.50. State and Territory-based schemes, such as the ACT renewable energy target, offer a different incentive. In the case of the ACT's reverse auction, a guaranteed price for each MWh generated is paid to the winning bidder. Figure 3 shows the impact these schemes have had on South Australia’s electricity supply where much of the investment in renewable energy (and wind in particular) has occurred. 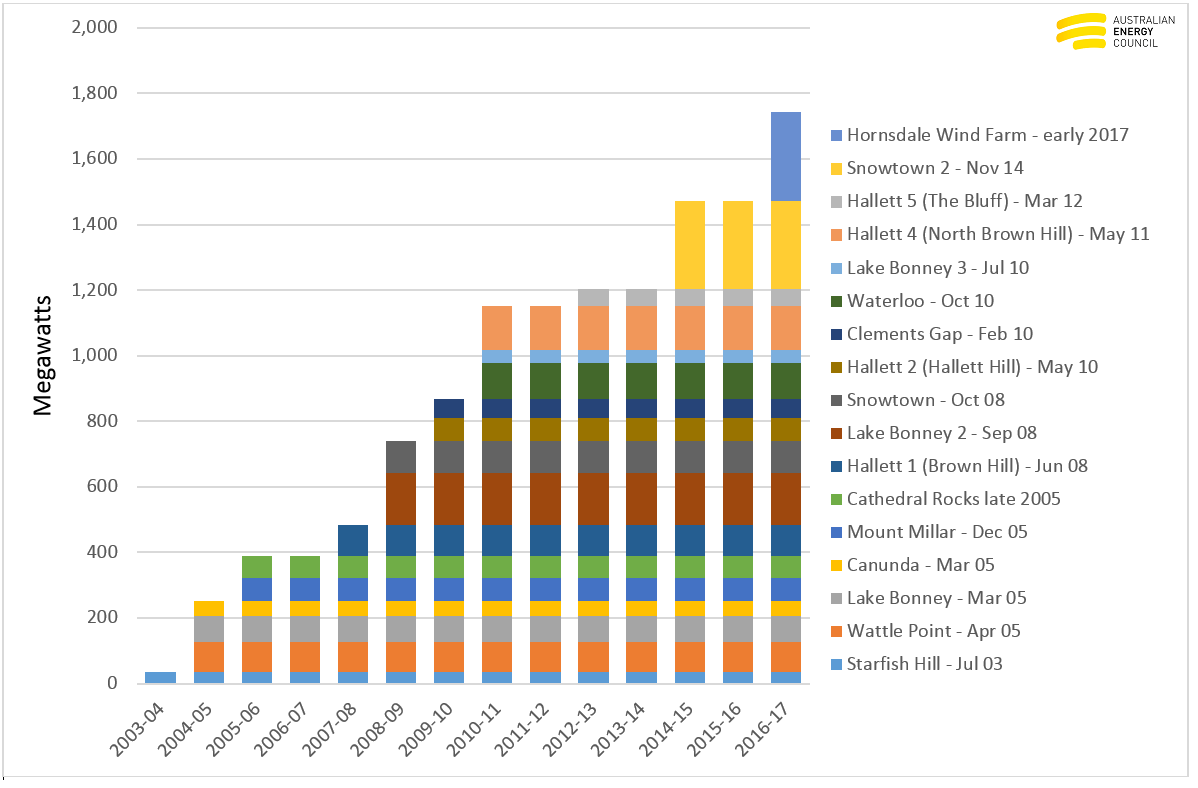 Each event over $5,000/MWh is analysed by the Australian Energy Regulator and its assessments can be found here.

Figure 4: Highest number of events in a financial year for each region in the NEM

During the first quarter of 2008, the electricity spot price in South Australia exceeded $5000/MWh on 51 occasions. An initial AER report into the events of January and February 2008 found that the high prices were caused by a combination of high demand, generator bidding and transmission constraints[i].

The majority of Queensland’s large price spikes in 2014-15 occurred during summer where Queensland sweltered through a heatwave leading some analysts to think a new LNG plant had been switched on[iii]. Instead, we later learnt that Queenslanders were leaving air conditioners on to deal with the extreme heat. During times of high demand, supply and demand are tighter than usual and prices become volatile during times of constraints. December 17 saw seven periods where spot prices were above $5,000/MWh. Temperatures reached 38.5 degrees and demand reached 8,445 MW.

Recent analysis on South Australia’s high prices can be found on the Australian Energy Council website. Interconnector constraints, high gas prices, the decommissioning of Northern, a cold snap and wind availability have all played a role in the recent high priced events in South Australia.