The market response to the loss of 1600MW of dispatchable generation and the behaviour of market participants has been a discussion point since the closure of the Hazelwood brown-coal fired power station in Victoria in March 2017.

Hazelwood provided around 20 per cent of Victoria’s electricity and allowed it to export to other regions of the National Electricity Market (NEM).

The impact of the loss of this level of supply (compounding the earlier closure of Northern) was highlighted by the significant increase in wholesale prices.

One concern that was raised was the potential for the loss of supply of this magnitude to translate into “anti-competitive behaviours among remaining generators”[i].  It led the Federal Government to ask the Australian Energy Regulator (AER) to monitor market developments, particularly in Victoria and South Australia given they were the states most impacted. The regulator was requested to advise COAG’s Energy Council on anything affecting the efficient functioning of the market within one year of Hazelwood closing its doors.

The result is a detailed look at Hazelwood’s impact on wholesale prices and bidding responses from remaining generators. In short, the AER found that the increased wholesale prices were the result of Hazelwood generation being replaced by higher cost generation from gas power stations in Victoria and South Australia, as well as black coal plants in New South Wales and Queensland.  This substitution also occurred at a time when there were increased fuel costs for some of these generators. Combined, these factors led to significant increases in wholesale electricity prices.

But what impact did Hazelwood’s closure have on bidding behaviour by the remaining generators?  In terms of anti-competitive behaviour the AER’s analysis found:

There were shifts in the export and import levels of electricity in NEM regions. Victoria went from being a net exporter to net importer of electricity (we have previously looked in detail at the shift in energy flows, particularly during the summer peak demand period  - “Electricity exports: What did the NEM do last summer?”).

To the west, South Australia became a net exporter, having previously been a net electricity importer.

Interconnectors between regions were constrained less often and this led to a greater degree of price alignment between the states.

With the closure of Hazelwood the AER notes that black-coal generators in Queensland and NSW generated 665MW more on average, despite coal supply constraints in late 2016 and into 2017. Hydro generation decreased between 2016 and 2017, while gas-fired generation increased on average by 652MW.

The shift in generation by region and fuel source is shown in Figure 1 below. 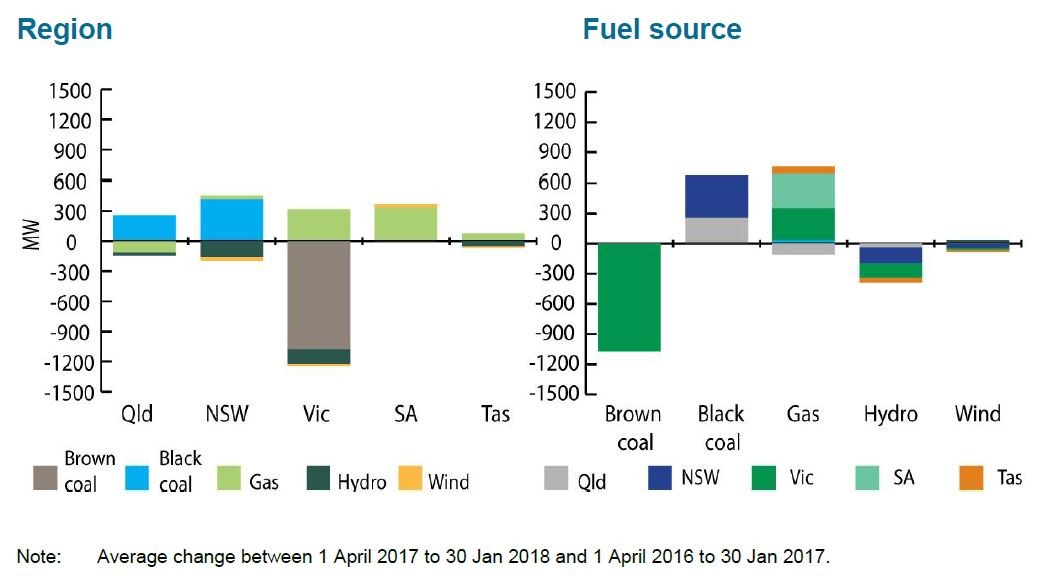 The report also highlights the shift in price setting by fuel type in Victoria following the closure of Hazelwood, which is shown below.

Figure 2: Price setter in Victoria by fuel type (per cent of time) 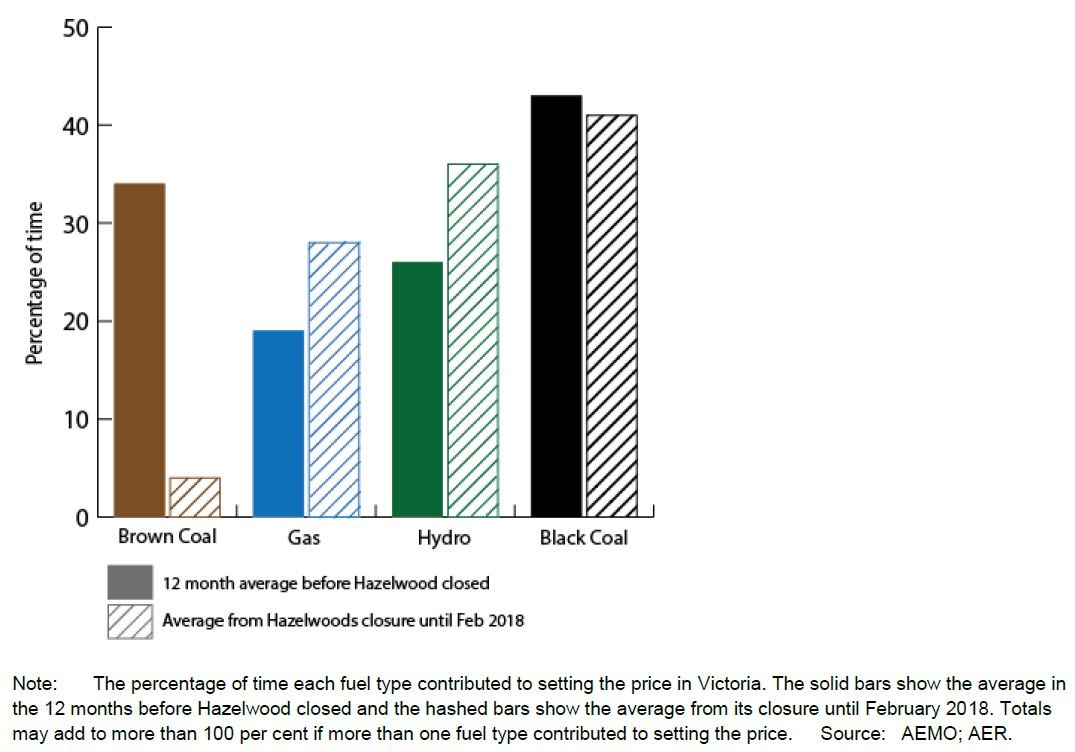 The report highlights that price alignment in the mainland regions of the NEM increased significantly in 2017. It notes that prices in Victoria and South Australia were also more aligned with the overall NEM prices in 2017, indicating that the NEM “acted as a single market more often than as a collection of regional markets and consequently generators within a region were subject to competition from generators in other regions”.

This was the result of interconnectors between Victoria and bordering regions being less constrained in 2017 than previously – key factors included the upgrading of the Heywood interconnector, the fall in exports from Victoria to NSW resulting in the interconnector not reaching its technical limits as often, and the availability of Basslink (its unavailability had prevented transfers between Tasmania and the rest of the NEM in 2015-16).

The AER noted that even while the loss of Hazelwood’s generation “heightened the potential for competition issues to arise, we did not observe generators withholding significant capacity or shifting lower priced capacity to higher priced bands”.

Figure 3 shows generator offers in Victoria. The AER comments that while generators continued to offer more than half their capacity into the market at the lowest price bands, they reduced the capacity offered at the highest band and shifted it to middle price bands (circled below). 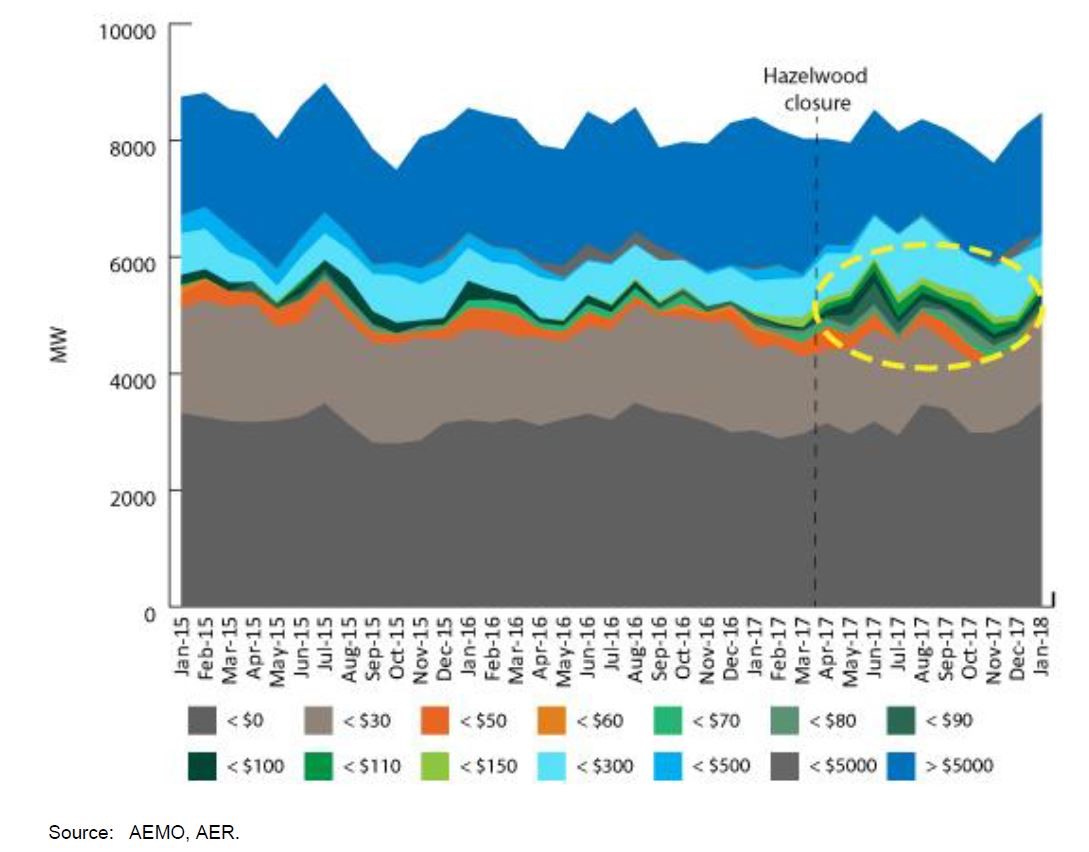 Across the border, the only significant change in generator offers in SA was the increase in capacity from Pelican Point, with the return to service of its second turbine. The extra capacity was offered mainly at the floor price and between $50/MWh and $150/MWh (shown by the yellow circle in figure 4). 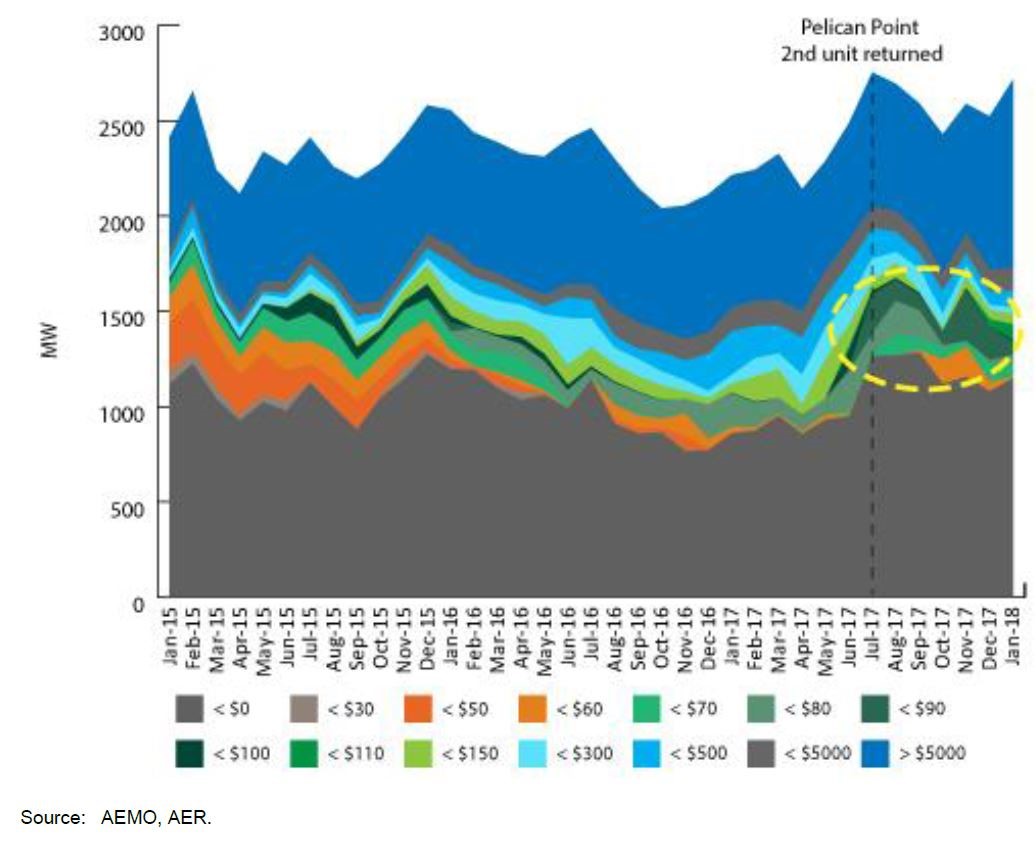 The AER’s report concludes by flagging potential longer term issues that it says need ongoing monitoring. These are increased market concentration and whether additional new capacity will come into the market in response to higher prices (it notes that there are factors, like policy uncertainty, jurisdictional energy and climate action that temper commercial investment decisions). The AER will continue to monitor these developments and the market’s continued response to the loss of Hazelwood.

The AER’s work highlighted that the market worked as it was designed to (with the proviso that the investment signals provided by higher prices continue to be muted by the lack of national policy certainty and jurisdictional ambitions). In this regard the report is unsurprising, and similar to the AER’s findings in its NSW electricity market report[ii]. Its importance is that it provides reassurance that market participants have responded as would be expected.

While the report does flag an increase in concentration in the market, as a result of the significant plant exiting the NEM,  it did not find this to have driven anti-competitive outcomes.

The report shows that the interconnected NEM worked as intended, assisted by fewer constraints between Victorian and neighbouring regions. This meant a fall in supply in one state was met by increases in other regions. Prices did increase, which again, is to be expected as the dispatchable supply-demand balance changed, but the NEM allowed the loss of supply to be better managed than if the states operated in isolation.