Governance and Regulation of Market/System Operators

In this era of dramatic changes in the energy markets – with completely new generation technologies, revolutionary impacts of distributed technologies, and a deepening transmission grid all interacting – the market and system operator’s role, performance and industry engagement are crucial.

The question of the best possible structure and governance of the essential market operator is therefore not an abstract one. Ensuring we have the best design will fundamentally impact on investment efficiencies, customer costs, and achieving national emissions goals. The past decade has seen considerable increase in the Australian Energy Market Operator’s scope over the original model established for the National Electricity Market (NEM).  This has increasingly flowed through to higher costs.  It is therefore timely to revisit the market operator’s governance framework and draw on overseas examples to see if there are valuable learnings and insights.

Today we are pleased to present a report on best practice Governance and Regulation of Energy Market/System Operators prepared by Cambridge Economic Policy Associates (CEPA). This is the culmination of a collaboration between the Australian Energy Council (AEC) and Energy Networks Australia (ENA).

Critically, the research is not in any sense a review of the Australian Energy Market Operator’s (AEMO) performance – rather, it is a study of the governance processes that would be expected to drive outcomes characterised by high performance and accountability.

CEPA has undertaken a comparison of similar bodies in six jurisdictions around the world, drawing on insights from arrangements in the United Kingdom, New Zealand, Western Australia and the United States. These were supplemented by interviews with stakeholders across the energy chain around the practical operation of Australian arrangements.

The CEPA’s report is accessible and insightful. Its considerations and conclusions are highlighted below.

AEMO was created in 2009 with a governance of 60 per cent ownership by participating jurisdictions and 40 per cent by “members” - with every registered participant in the NEM becoming a member. Its functions were largely adopted from its predecessors, the National Electricity Market Management Company (NEMMCO) and the Victorian Energy Networks Corporation (VENCorp).

AEMO’s responsibilities have grown over time, in particular with the expansion of the National Transmission Planner (NTP) function to develop the Integrated System Plan (ISP). AEMO’s role in market development has also become more significant, both through its membership of the Energy Security Board (ESB) and its investigations into significant industry design matters, for example:

With these additional activities and a more complex power system, it is not surprising that AEMO costs have grown and are forecast to continue to grow at a rapid rate. This is in the context of broad declines in both network charges and wholesale energy upon which this budget is levied. 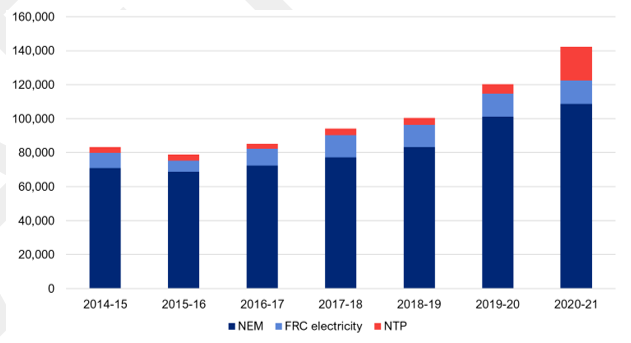 In this environment of change and growing scope and costs, Energy Networks Australia and the AEC considered it appropriate to assess the NEM’s arrangements against best practice elsewhere. Since the project began, it is pleasing to note activities driven by similar motivations are bringing focus on some of the issues considered in the CEPA report, such as:

In embarking on its research into governance arrangements for comparable international market and system operators CEPA identified six principles of good governance in not-for-profit organisations which were drawn from the Australian Institute of Company Directors (AICD):

As with any study on comparison electricity markets, CEPA found significant differences in roles and governance of market and system operators elsewhere. In fact, none of the comparison operators had an identical role to AEMO in the NEM, not even AEMO in Western Australia’s Wholesale Electricity Market (WEM). Much of this reflects the different histories of the markets.

Thus, a comparison is not straightforward. CEPA qualitatively explored the different governance circumstances and drew from them some key features for reflection. This identified a range of feasibly potential models and approaches applied to these same governance issues across jurisdictions. Highlights include:

Against the best practice governance principles, CEPA found many parts of the AEMO-NEM arrangements to be equal or superior to other situations. Some areas are different, but not necessarily problematic, while in others there is room for improvement.

AEMO’s 60 per cent government/40 per cent industry ownership is unusual, but not necessarily problematic to good governance, if accountabilities are clear. AEMO’s board appointment process is strong, however the engagement with members through shareholder meetings appears not to have developed in the way that, say, a public company’s would have.

Figure 2: Summary of CEPA’s observations of AEMO-NEM against AICD principles 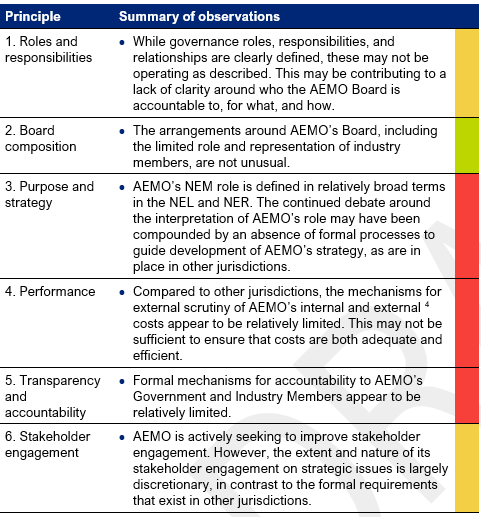 Some possible pathways for improvement

Drawing from these observations, CEPA has suggested three models that might lead to improved Market/System Operator governance in the NEM.

Model 1 is an incremental approach which leaves the present structure intact but achieves greater accountability through explicit consultation requirements and clarification of AEMO’s role as recommended by RDME.

Model 2 involves the creation of a Committee jointly staffed by AEMO and members to oversee AEMO’s corporate plan and budget.

The CEPA review highlights some areas where existing AEMO governance is strong, but also highlights areas for potential improvement. As the energy market evolves there is a need to regularly re-check and satisfy ourselves that with changes in scope and responsibilities there is an equal focus on the checks and balances that will drive a cost-efficient, responsive and accountable market system operation framework. Others, such as the independent review of the ESB and earlier reviews have pointed to these issues. With a present commitment from energy ministers to start a review of the governance of the energy market from mid-2021, there is no better time to start the conversation about how we ensure our market and system governance processes are as dynamic, reliable and responsive as the market they administer.

The AEC and Energy Networks Australia greatly appreciate the donation of time by many experienced stakeholders in supporting CEPA’s research through interviews to test its analysis.