Getting wind and solar onto the grid: IEA points the way

System integration is part of a whole range of challenges that arise in the deployment of intermittent technologies. A recent report by the International Energy Agency (IEA) “Getting Wind and Sun onto the Grid”[i] highlights the challenges of intermittent energy integration, which are likely to emerge around the world and how to solve them. It points to regional concentration of wind and solar generation potentially leading to issues, such as those seen in South Australia for example.

The IEA report highlights the need for the grid to continually change to suit the evolving needs of the power system, as the share of intermittent generation increases and countries keep pace with changes to energy and climate policies, such as renewable energy and emissions reduction targets.

A failure to keep pace with rising intermittent generation is expected to lead to increased costs in the long run, and may threaten the security of the grid, as currently witnessed in South Australia. With Queensland and Victoria setting high state renewable energy targets these risks are also relevant to those states.

Phase one: Intermittent capacity has no noticeable impact on the system, this phase includes Indonesia, South Africa and Mexico; which have annual intermittent technology shares that reach up to around 3 per cent of annual electricity generation.

Phase two: Intermittent technology’s share of energy ranges from 3 per cent to almost 15 per cent, and countries in this phase are said to be Chile, China, Brazil, India, New Zealand, Australia, the Netherlands, Sweden, Austria and Belgium.

Phase three: With further deployment electricity supply is characterized by significantly higher levels of uncertainty and variability. This requires a more dynamic operation of existing dispatchable power plants, while intermittent energy forecasts become essential for efficient system operation. Where deployment of a large number of smaller variable renewable energy (VRE) plants is concentrated “reverse” flows from the medium and low voltage grid to the transmission level will become increasingly common. Examples of countries considered to be in phase three of intermittent technology deployment include Italy, the United Kingdom, Greece, Spain, Portugal and Germany; the intermittent generation share in these countries ranges from 15 per cent to 25 per cent in annual generation.

Phase four: This is where most challenges emerge, according to the IEA, and here it is possible for the intermittent energy output to cover most or even all power demand in certain situations. New issues emerge which relate to the ability of the power system to maintain stable operating conditions immediately following disturbances to the system. So the resilience in the face of events that might disturb its normal operation on very short timescales (a few seconds and less). Countries that are seeing challenges primarily related to this phase include Ireland and Denmark, with an annual intermittent generation share of around 25 per cent to 50 per cent in annual generation.[iii]

Figure 1 below highlights the difference countries in each phase.

Source: International Energy Agency report, “Getting Wind and Sun onto the Grid”, 2017

According to the IEA report, unlike other countries around the world, Australia is unique in that certain parts of the country’s large power system are entering a more advanced phase than the rest of the system. Figure 2 highlights where each Australian states sits under the IEA phases.

Figure 2: Share of Intermittent generation across the National Electricity Market (NEM) in 2016 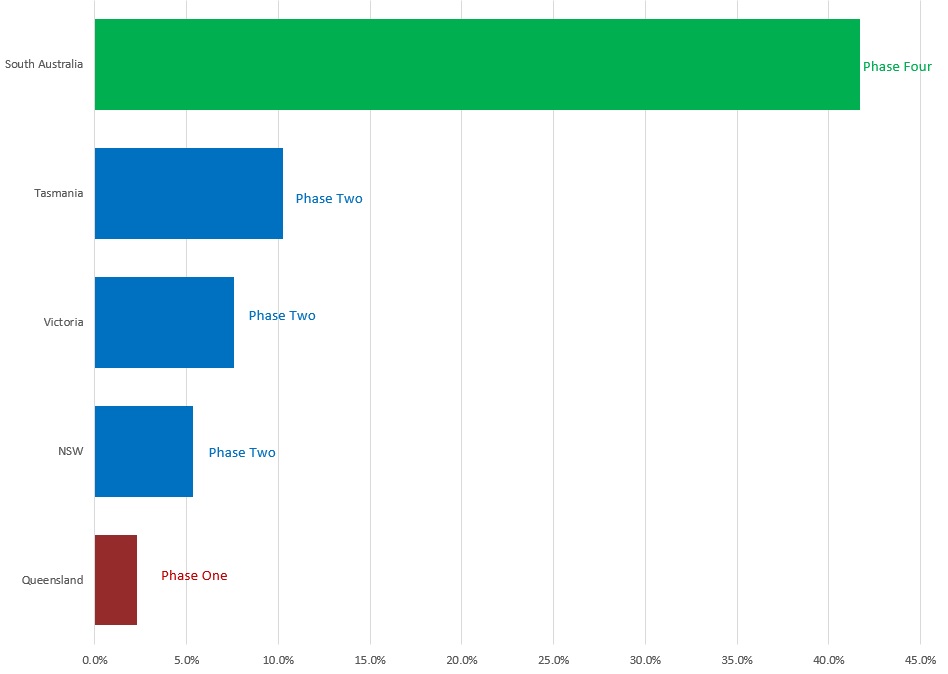 How do measures to maintain cost-effectiveness and reliability of the power system differ over four phases of intermittent energy deployment?

In phase one, the challenges are small but the IEA highlights two aspects that are important, these include proper assessment of the impact of those first few intermittent plant on the grid at their point of connection; and secondly having a set of rules in place appropriate to governing their operation. Integration tasks in phase two however are more onerous, although international experiences from the IEA show that they are manageable.

In phase two, although intermittent technologies appear to have a noticeable impact, by upgrading some operational practices they can be managed quite easily according to the IEA. For example, forecasting of intermittent generation output can be done so that flexible power plants can balance their variability, along with that of electricity demand, more efficiently.

Phase three sees the first really significant integration challenges, as the impact of variability is felt both in terms of overall system operation, and by other power plants. Power system flexibility now becomes important. The IEA’s first priority is to make fully available the flexibility[iv] that exists already in the power system, so that it can accommodate the variability of intermittent generation. The way in which conventional power plants operate often represents the easiest flexibility gain.

International experiences throughout the report show that a well-balanced portfolio of wind and solar PV power plant can have complementary electricity output profiles, which may enable the better use of existing grid assets. The report expresses concern for South Australia where the concentration of intermittent generation has led to energy reliability issues rather than the state having a dispersed portfolio which would have provided smoother overall output.

The challenges that emerge in phase four become highly technical and the focus moves to the stability of the power system. The challenges that arise in phase four include the design of renewable energy policy frameworks, measures to kick-start a domestic renewable energy market, and questions around the design of wholesale and retail electricity markets. These challenges however are also very likely to occur in earlier phases.

Efficient grid integration of intermittent technologies will see measures that are appropriate and proportionate to the deployment phase. In some systems these measures can be implemented using existing assets, in others it may be required to invest in additional infrastructure. In both cases, the IEA highlights that a failure to keep pace with rising intermittent generation will lead to greater cost in the long run, and may threaten the security of the power system. Conversely, putting in place excessively high requirements on new generation can also increase costs and/or slow deployment.

What is likely to happen across the NEM?

Although there are other countries and regions that have high renewable penetration, none are as singularly reliant on intermittent renewables (wind and to a lesser extent, solar) as South Australia is. Consumers are currently observing increased unreliability events for a variety of reasons. The inability of the South Australian grid though to respond quickly enough to minimise the impact of large losses of load has been a major problem.

South Australia is likely to be followed by other NEM states in the near future. Queensland and Victoria have set state renewable targets, with wind and solar expected to be the dominant technologies under these schemes[v]. As figure 3 shows this is likely to place most NEM states under phase four, the most critical IEA stage. Tasmania is one state that is unlikely to be impacted as they have a large and flexible portfolio of hydro, so there is less of a driver for achieving high levels of intermittent renewables. 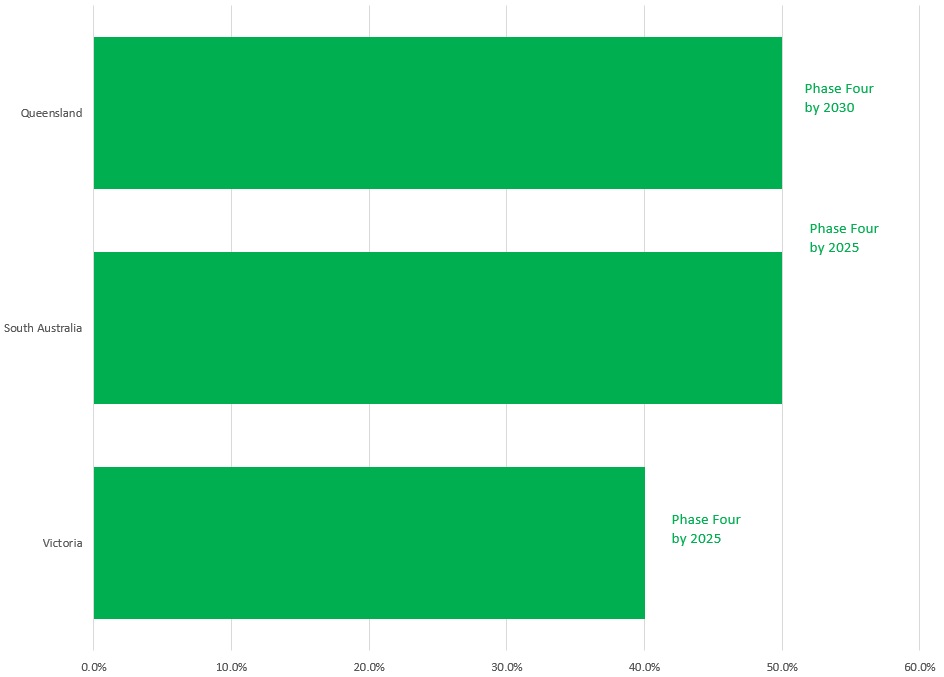 As we have observed over the past year in South Australia, managing a high intermittent generation electricity grid is materially different to the conventional baseload model of the 20th century. The market has been increasingly distorted by a number of policy interventions and poor policy co-ordination.

To try and solve its energy security issues, the South Australian Government has decided to build a 100 MW of battery storage system and a government-owned 250 MW gas-fired power plant.

So what steps do the IEA propose should be taken?

Source: International Energy Agency “Getting Wind and Sun onto the Grid” report, 2017

The main technical requirements related to intermittent deployment are:

In South Australia, the State Government has pointed out that it would be preferable if they could solve energy policy at the national level.  This will require a suite of policy measures: a constraint/signal on greenhouse gases, agreement on improved gas access, a revised renewable energy policy as well as upgrades to the way the grid is operated to help avert and prevent future blackouts, whilst still seeking to keep costs down. All points that have been raised by the IEA.

[i] International Energy Agency, 2017, “Getting Wind and Sun onto the Grid: A Manual for Policy Makers”

[iv] The term flexibility in this context describes the ability of the power system to respond to uncertainty and variability in the supply-demand balance, in the timescale of minutes to hours, for example providing power from other sources when the wind drops.