Germany, via its Energiewende, is considered to be at the forefront of the energy transition that is underway internationally. Under this “energy transformation”, Germany is seeking to change the mix of its electricity generation to reduce its carbon emissions, while managing the costs to the system and ensuring reliability.

Last year, Germany’s carbon emissions overall emissions rose nearly 0.9 per cent in 2016, the second year in a row. This was attributed to economic growth and a colder than usual winter, while emissions from the electricity sector fell.

According to AG Energiebilanzen increases in consumption were recorded for natural gas and mineral oil (in transport), while renewable generation was up 2.9 per cent, largely due to increased hydro generation. Nuclear energy as well as hard coal and lignite showed a downturn. Nuclear generation fell 7.4 per cent in large part due to the decommissioning of the Grafenrheinfeld nuclear power plant (Germany is seeking to close all its nuclear power plants by the end of 2022). Figure 1 illustrates the changes in power production in Germany over the past 26 years. 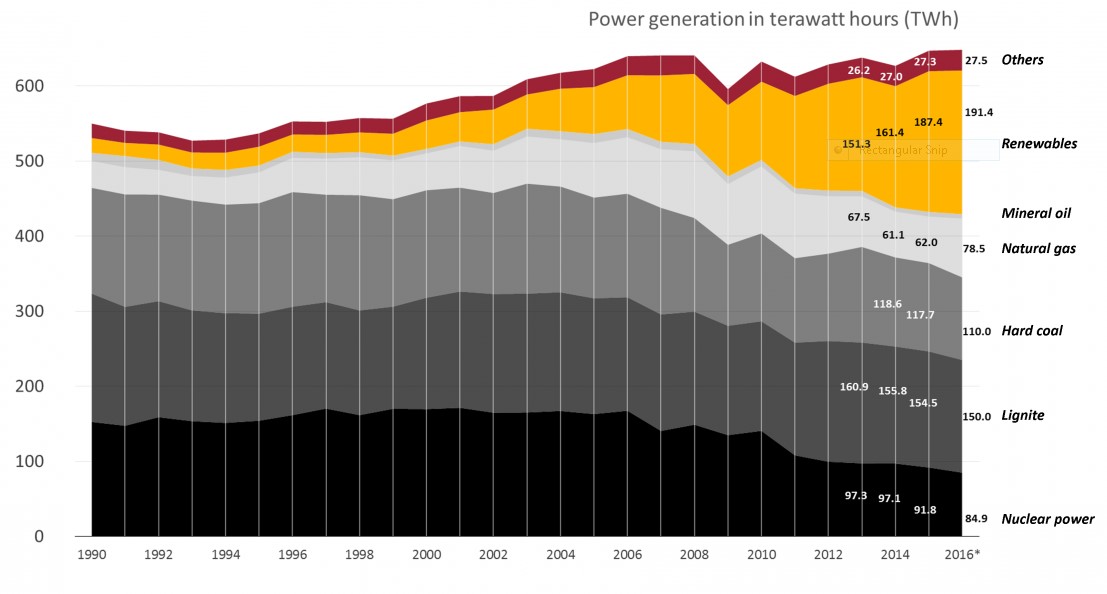 The reduction in sectoral carbon emissions, which was attributed to the decrease in use of both hard coal (down 4 per cent) and lignite (down 2.6 per cent), was more than compensated by the higher consumption of natural gas (up 10 per cent) and mineral oil largely for transport (up 1.8 per cent).[i]

In summary, while emissions in the industrial, heating and transport were all up, they declined slightly in the electricity sector largely thanks to the drop in coal-fired power generation for a third year and the contribution of renewable generation. So what next for coal and renewables in Germany?

Previously, Germany had been grappling with a so-called paradox of rising electricity production from renewables, but a rise in its emissions from coal (in part due to the need to substitute for firm generation from its decision to close nuclear plants). In 2015 Germany proposed a surcharge on polluting power stations[ii]. This was ultimately scrapped and replaced by a proposal to mothball and ultimately close 2700MW of brown-coal fired power stations (13 per cent of lignite capacity) – the lignite standby reserve. This started late last year and is enshrined in the new Electricity Market Act that was passed into law last year.  Eight lignite-fired units will stay on emergency reserve for four years and subsequently shut down for good.  This is expected to save 11 to 12.5 million tonnes of CO2 in 2020 – an emissions cut that is considered necessary for Germany to achieve its national 2020 climate target[iii].

The eight units involved are Buschhaus (operated by Mibrag), Frimmersdorf P, Frimmersdorf Q, Niederaussem E and F, Neurath C (all operated by RWE), Jänschwalde F and Jänschwalde E (both operated by Vattenfall).  The plant owners receive will receive 230 million Euros a year for seven years (a total of 1.6 billion Euros) to compensate for lost earnings, funded by grid fees. The plants are required to be made ready for production within 10 days if required and requested to restart.[iv]

This approach represents an interesting way to navigate the challenges of reducing emissions from high emissions generation, while recognising the key role they have played in keeping power systems reliable and secure. How useful 10 days’ notice to restart is dependent on the specific challenges the system operator faces in maintaining reliability, as the requirement for dispatchable, synchronous capacity can often emerge over a much shorter time frame.

Electricity generated from renewable sources, including hydro, has tripled over the past decade. Germany used generation feed-in tariffs which have proven to be very effective at driving investment -  albeit at significant cost to consumers - with renewables’ share of generation growing to around 32 per cent in 2016[v]. Under the feed-in tariffs any renewable power investor could sell their green electricity at a guaranteed price above the wholesale market price, fixed in advance for 20 years.  This support was reflected in the second highest energy bills in Europe with energy consumers paying 20 billion Euros in 2015 to green energy producers through a surcharge on their electricity bills. 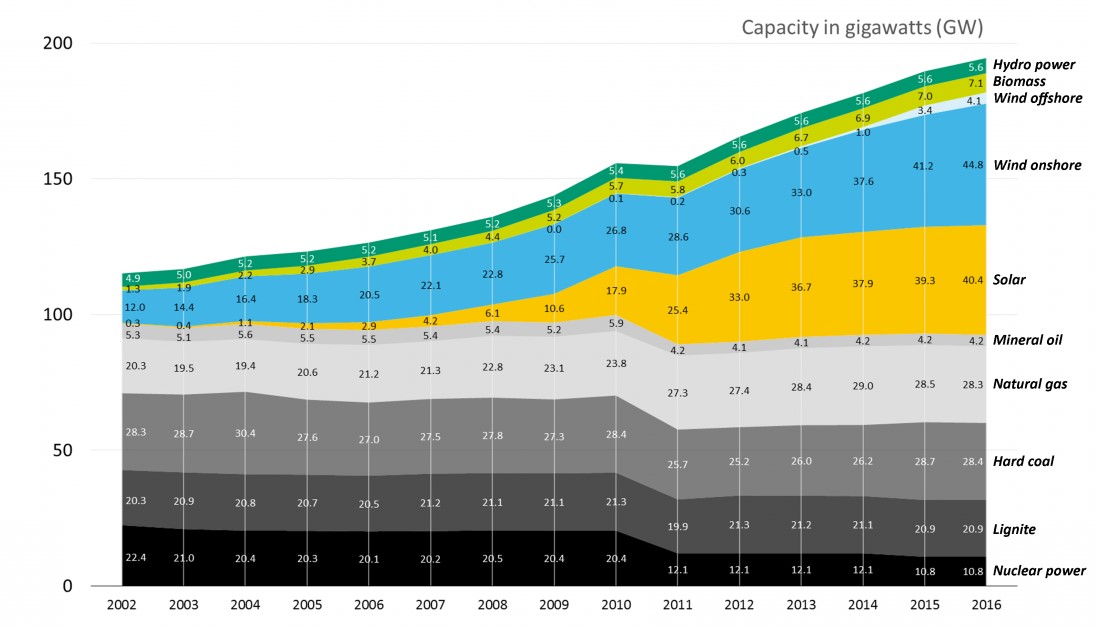 To better manage the pace of further expansion as well as the costs to the system Germany amended its Renewable Energy Sources Act (EEG 2017). Under the new act which came into force on 1 January this year the share of renewables in the German grid is capped at 45 per cent by 2025 and auctions will replace the FiTs.

The EEG 2017 also replaces the prescribed feed-in tariffs with an auction system for the majority of renewable technologies. There are expected to be three auctions held this year. The Federal Network Agency will oversee the competitive bidding processes and the German Government expects more than 80 per cent of future added capacity to be put out to tender[vii] This approach was originally tested in a pilot phase for solar electricity as part of the earlier EEG 2014. This was considered successful and it was decided to extend the principle to onshore, offshore, solar electricity as well as biomass[viii].

Figure 3 shows the expected impact on carbon emissions because of Germany’s additional measures.

Figure 3: CO2 emissions in the electricity sector, 1990–2020, and the effects of additional climate measures included in the Climate Action Programme 2020 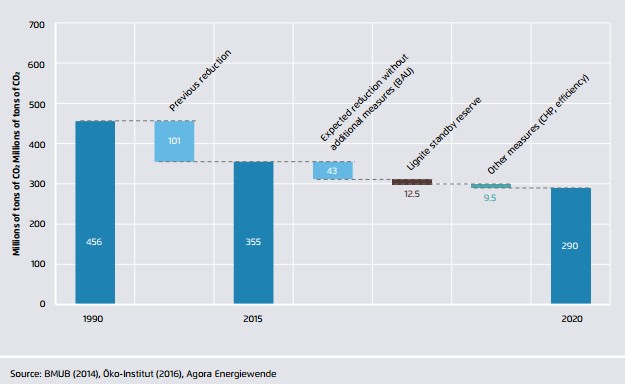 Germany’s changes reflect the need to constantly manage the transition to a lower emissions energy system to ensure both reliability and manage the cost of the energy transformation underway. The country’s rising emissions profile is a reminder that while the energy system plays a big role in the transition to a decarbonised economy, other sectors need to contribute, too.