Recent data that looks at Germany’s greenhouse gas emissions (GHG) shows that despite the country’s renewable energy in the energy sector growing, the share of emissions from the sector has remained relatively flat.

But what’s really behind this trend? And how does this compare to Australia’s electricity generation sector? Here we take a look.

Clean Energy Wire recently reported that Germany’s GHG emissions have continued to decrease to reach 866 million tonnes of CO2 equivalent (Mt CO2-e) in 2018. The country’s energy sector is the largest source of domestic GHG emissions (figure 1), yet in 2018 the sector decreased its CO2-e emissions to 299 Mt CO2-e (14 Mt CO2-e lower than 2017).

Shown in figure 2 renewable energy in the energy sector has grown steadily to 35 per cent of total electricity generation in 2018 (from 6.6 per cent in 2000), yet compared to total emissions, Germany’s 2017 and 2018 energy emission share has remained at 34.5 per cent. According to Agora Energiewende, factors for the slowing reduction in carbon emissions are due to increased economic and population growth, as well as lower carbon prices and lower oil prices[i]. At the same time weather conditions have played a part.

Figure 2: Share of renewable and GHG emissions in electricity production in Germany since 2000 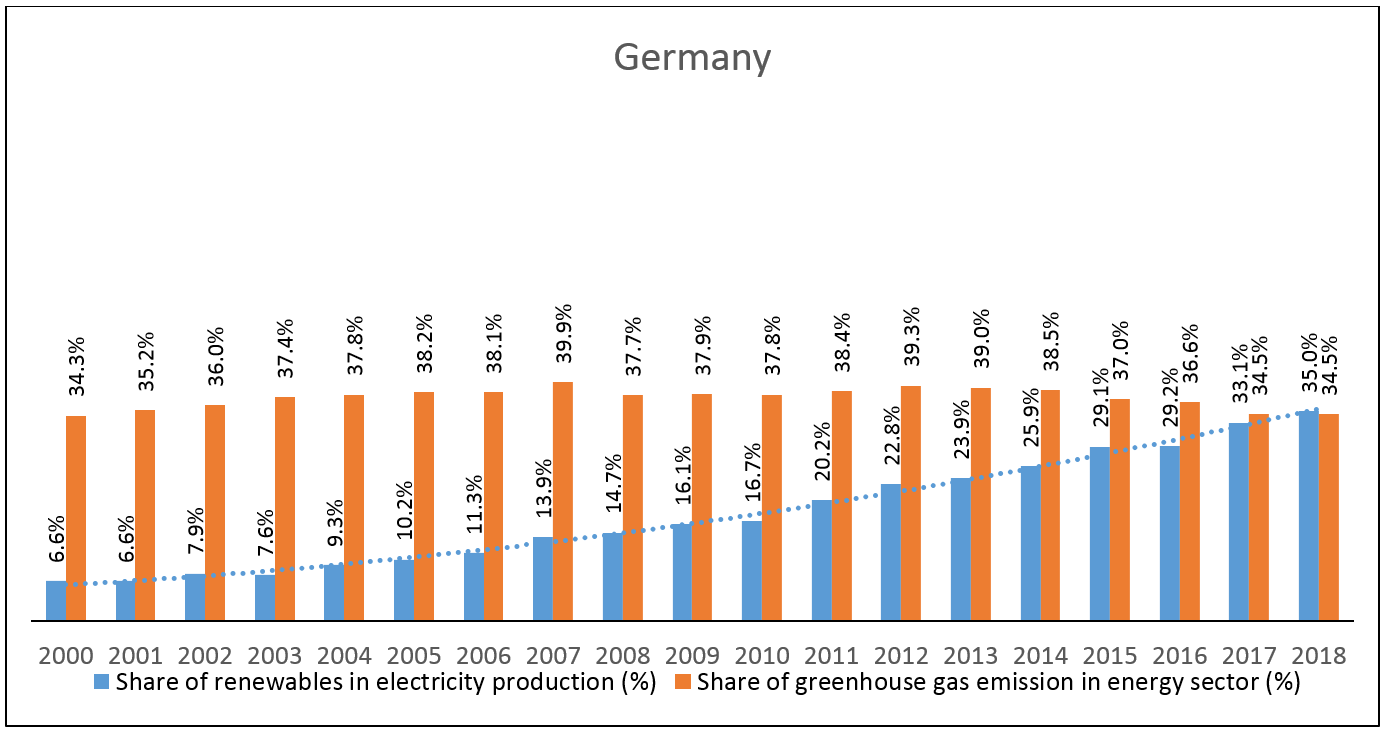 For comparison, Australia’s 2020 emissions are projected to be 540 Mt CO2-e[iv], with 30 per cent of Germany’s population.

Germany, via its Energiewende, is changing the mix of its electricity generation to reduce its carbon emissions, while managing the costs to the system and ensuring reliability. The policy document was published by the German Government in September 2010, six months before the Fukushima nuclear accident. Following Fukushima, the government removed the use of nuclear power as a bridging technology within the policy.

In 2000, Germany’s nuclear power stations had a 29.5 per cent share of the power generation mix. In 2016, this share dropped to 13 per cent, and by 2022 all nuclear plants are planned to be offline. In terms of installed capacity, nuclear power represented 20.4 GW in 2010, which dropped by 40 per cent in 2011, to 12.1 GW. This has undoubtedly increased the challenge of meeting its emissions targets.

The German Government has also used generation feed-in tariffs (FIT) to drive investment - albeit at a significant cost, passed on to customers via a surcharge (over the past eight years the total cumulative surcharge has reached €165bn[v]).

Under the FIT scheme, any renewable power investor could sell their green electricity at a guaranteed price above the wholesale market price, fixed in advance for 20 years. To manage a further expansion (and also manage costs to the system) Germany amended its Renewable Energy Sources Act (EEG 2017), which came into force on in 2017. Under the act, the share of renewables in the German grid was capped at 45 per cent by 2025 and auctions replaced FITs. According to data from Bloomberg New Energy Finance, over the past decade investors have also attributed more than $250bn into the German renewables sector.

While the rise of renewables has not made much of a dent in Germany’s total GHG emissions, as of 2018, there is now as much wind and solar generating capacity in Germany (including both onshore and offshore wind projects) as coal, nuclear and gas capacity combined[vi]. This shift from nuclear and fossil fuels to renewable energy sources has rapidly increased Germany’s share of renewables from 6 per cent of total power generation in 2000 to 36 per cent last year.

But intermittency remains a challenge and emissions have remained high due to the continued use of coal power as nuclear declines. Germany’s reliance on lignite, which accounts for more than a fifth of annual power generation, is a key reason why the country is struggling to lower its emissions of carbon dioxide. Even when renewables are capable of producing enough energy to supply all of Germany’s electricity, the variability and fluctuation of renewables require coal and certain gas plants to remain operational as a backup. Another challenge is the country’s power grid: much of the renewable energy is generated in the windier north of the country, away from the industrial south.

Yet despite this, renewable energy is helping to cut down German emissions. The share of combined nuclear, gas and coal generation continues to be overtaken by Germany’s renewable generation.

From 2000 to 2007, the combined share of coal, gas and nuclear generation decreases, but the uptrend of change in renewables share of generation did not manage to reduce the energy share of German emissions. The effect is however notable since 2014, when renewables account for more than a quarter of generation. Continued expansion of renewable energy to accommodate the continued growth in population and energy consumption will be necessary to reduce its share of GHG emissions further.

Figure 3: Share of different fuels in Germany’s electricity gross production and changes to previous years since 2000 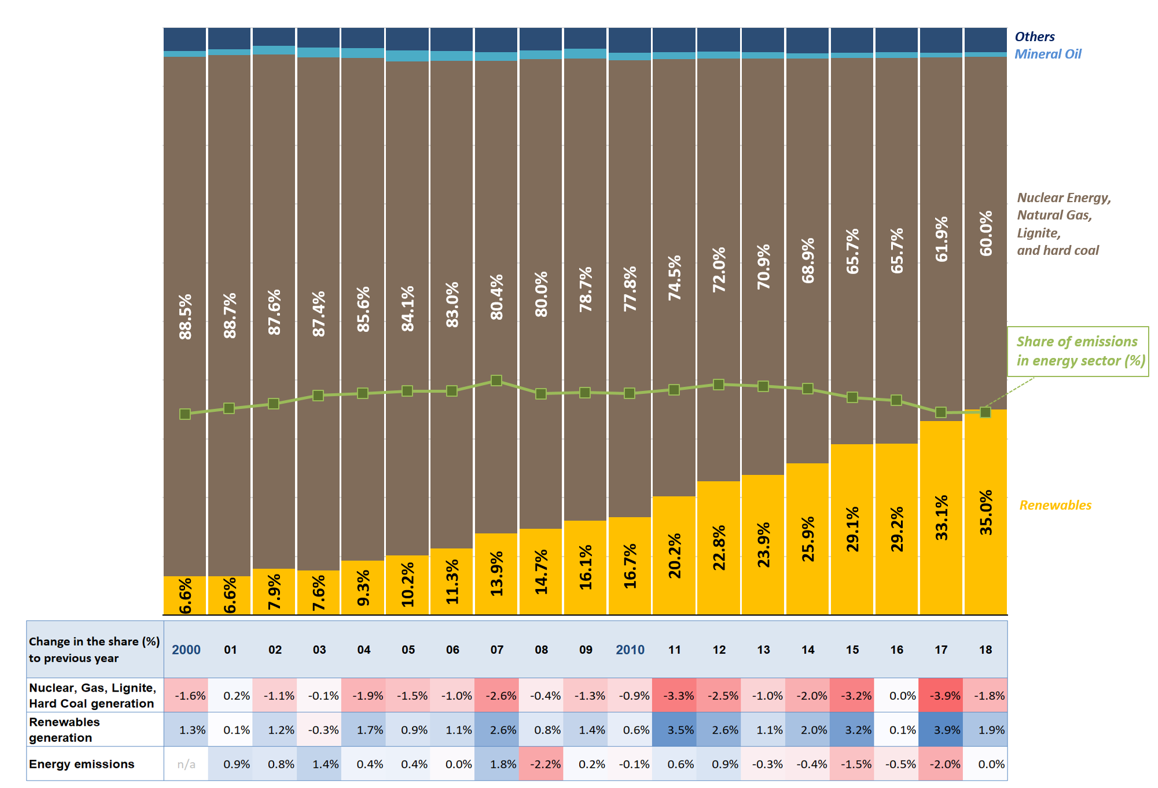 Frank Peter, deputy director of the think-tank Agora Energiewende remained optimistic about the long-term future when he said[vii]:

“For all the evident problems and challenges, experts insist that it would be wrong to write off the Energiewende as a failure. We absolutely have to ask ourselves why CO2 emissions are not falling … But what the Energiewende has done is to lay the foundations for a future in which those emissions will fall … The expansion of renewables in Germany has exceeded the initial expectations, the cost of wind and solar has fallen dramatically, and we have also become better at designing an energy market that works.”

How does Australia compare?

Figure 4: Share of renewable and GHG emissions in electricity production in Australia since 2002

Note: Share of renewables in electricity production does not included rooftop PV data. 2002-2017 data is sourced from Enerdata; 2018 data is sourced from Clean Energy Report. Source: Australian Energy Council’s analysis on Enerdata and Department of the Environment and Energy data, April 2019

Australia’s boom in large-scale renewable energy projects explains this growth: In 2018, 2,365 MW of new capacity was added and it is expected that this fast-growth trend of renewables in electricity generation will continue[viii].

According to the Department of Environment and Energy’s emissions projections, Australian emissions from electricity generation is expected to reach 170 Mt CO2-e in 2020, a decrease of 7 per cent on 2018 levels. The Department states that emissions are anticipated to fall across the NEM and WEM, as federal and state renewable energy targets drive increased renewable generation. Increased renewable investment and declining costs also contributes to emissions reductions. 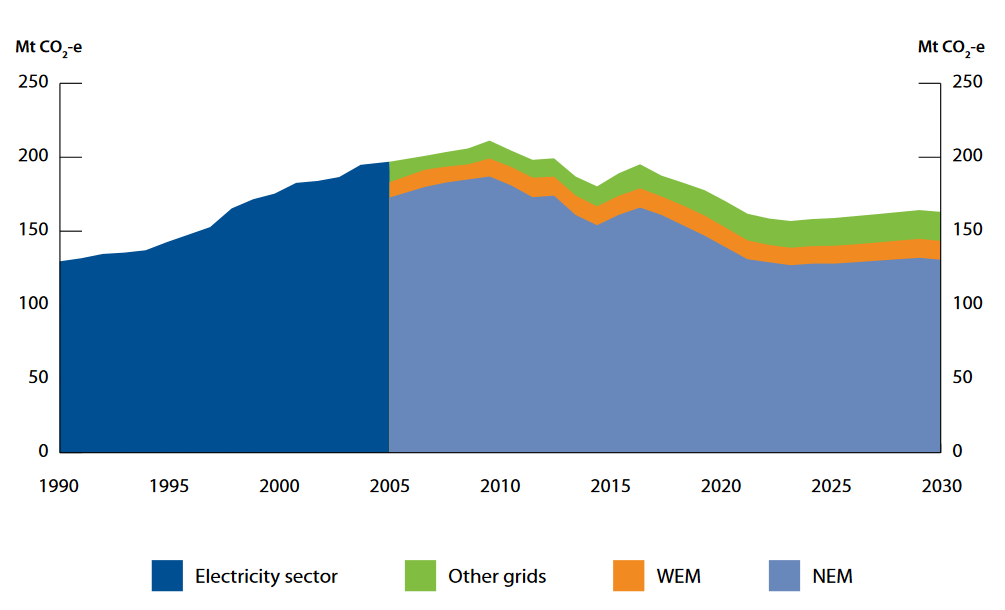 Under the Paris Agreement, Australia has a target of reducing emissions by 26–28 per cent below 2005 levels by 2030 – and the Australian Government’s 2018 projections show that the nation continues to make good progress on its emissions reduction targets.

Australia is expected to surpass its 2020 target by 367 Mt CO2-e and the task to meet the 2030 target has declined - with 2018 projections showing a 173 Mt CO2-e reduction in the task to meet our 2030 targets[ix]. Emissions in 2030 are projected to be 563 Mt CO2-e. According to the Department of Environment and Energy, this change is largely due to the decline of emissions in the electricity sector, driven by a higher than expected build for large scale renewables to the early 2020s, an increased forecast of small scale solar PV uptake, and lower than previously forecast electricity demand.

Note that the Australian Labor Party goes into the May 18 election with a policy of reducing national emissions by 45 per cent from 2005 levels, with a pro-rata sectoral target on electricity.