Gas in Australia: Where is it now and where is it going?

Gas reform has been a focus of government over a number of years. The implementation of the current reform process is now concluding, with most initiatives expected to be in place by mid-2020.

Every two years the Australian Energy Market Commission (AEMC) is obliged to report to the COAG Energy Council on the state of liquidity in the wholesale gas and pipeline trading markets. The last review, conducted in August 2018,[1] showed that liquidity is improving, and will continue to do so as further reforms are implemented. The Australian Competition and Consumer Commission (ACCC) has also completed a series of reports, making recommendations along the way, with its most recent interim report delivered in July this year. However significant environmental barriers to onshore gas exploration on the east coast remain.

Here we take a deep-dive into the background, current regulatory frameworks and the potential future trends of Australian gas developments.

Natural gas is Australia’s third largest energy resource after coal and uranium.[2] Reserves are classified according to their technical and commercial prospects of recovery, as shown in Figure 1 below.[3] 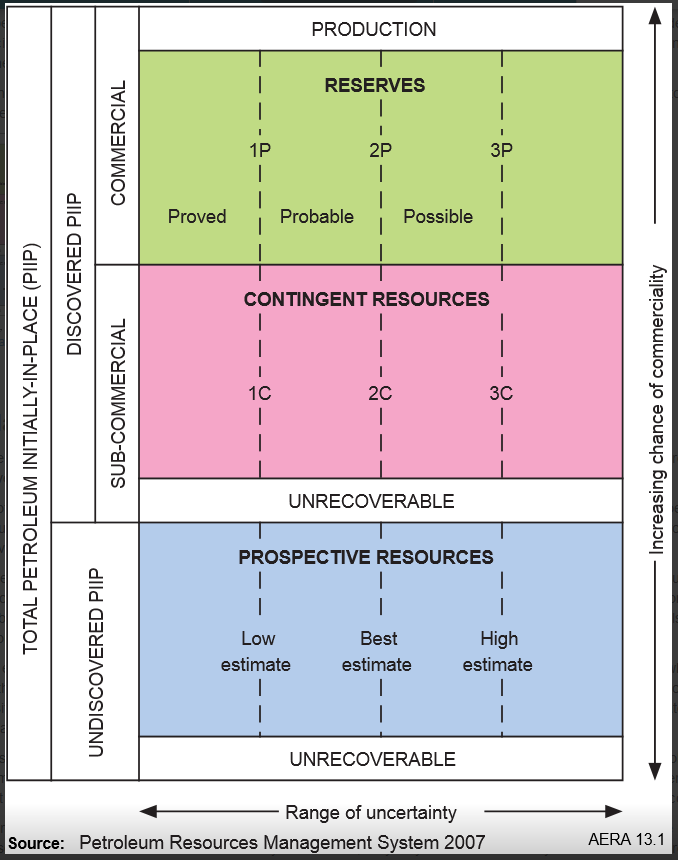 To give an idea of the magnitude of these resources, Australia produces (for domestic consumption and export) approximately 5EJ p.a.,[6] therefore Australia has over 20 years of supply available – without any further exploration and development.

Focusing on the National Electricity Market (NEM), last financial year east coast production was 1.9EJ, therefore again there are more than 20 years’ reserves available. The location of the reserves is set out on the following map. 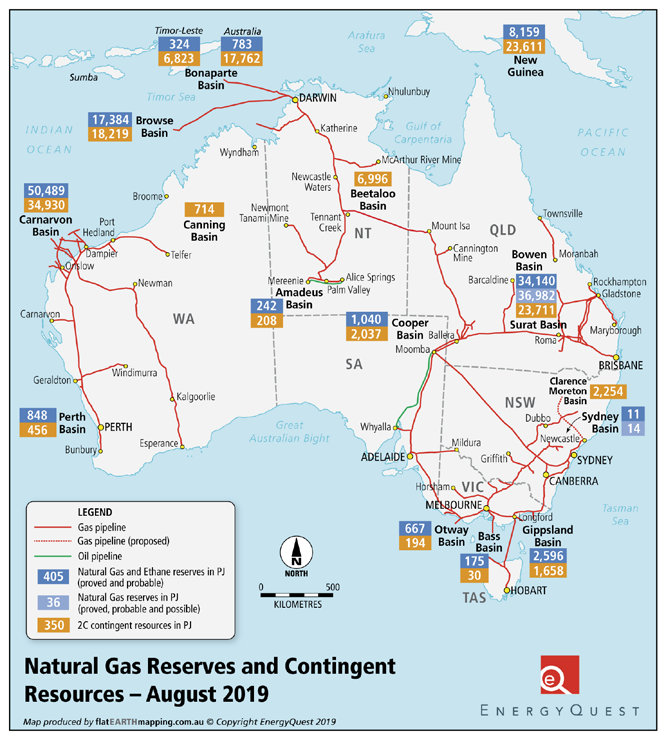 Due to their age, southern gas reserves, predominantly the Gippsland Basin, are declining, as shown in the following graph (figure 3). Nevertheless, within the limits of the Victorian Government’s gas exploration policy, other explorers have commenced offshore development,[8] and these are expected to supplement Victorian production in future years. 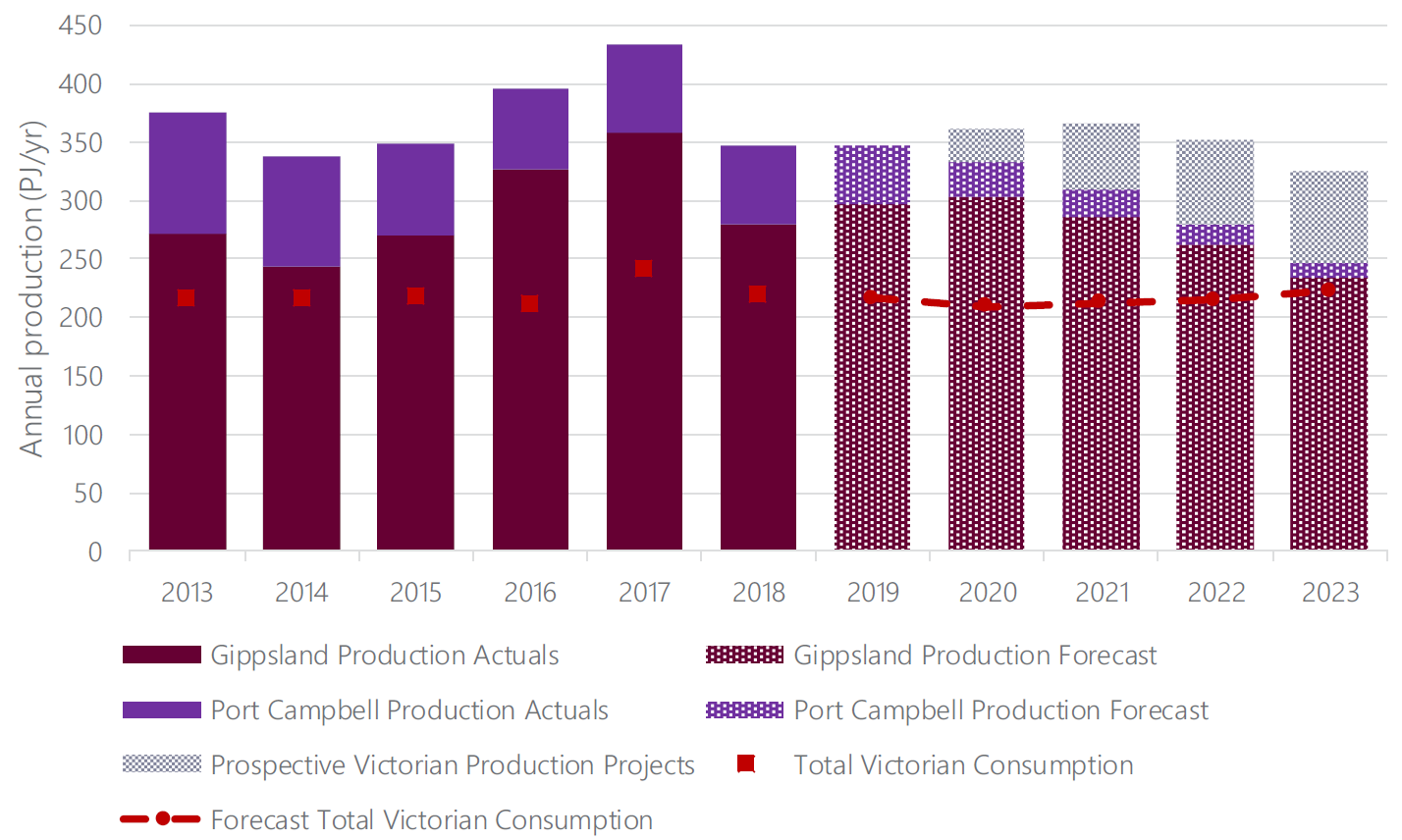 To bring the gas to load centres, there are a number of major transmission pipelines, as shown in the following map. 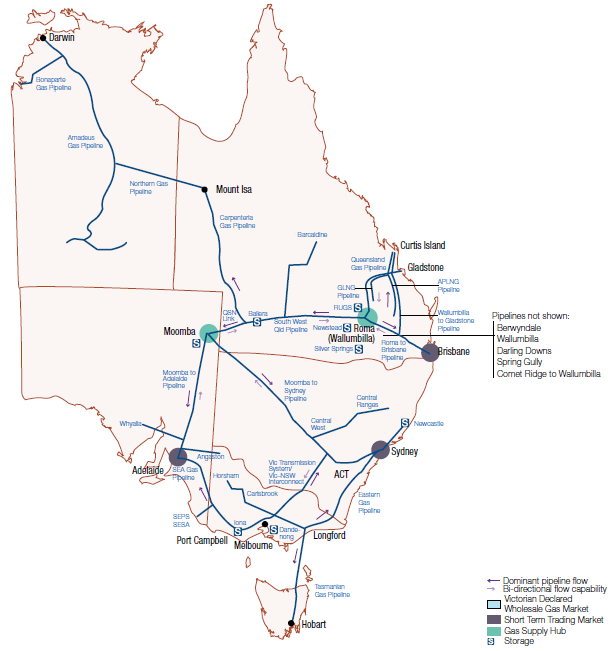 Since gas transmission pipelines have monopoly elements, the sector is subject to varying degrees of regulation, being:

Australia’s national demand is set out in the following diagram.

Source:  Department of the Environment and Energy[11]

Over the past ten years, Australia’s east coast gas demand has increased markedly, due to the commissioning of the Liquefied Natural Gas (LNG) plants in Queensland. 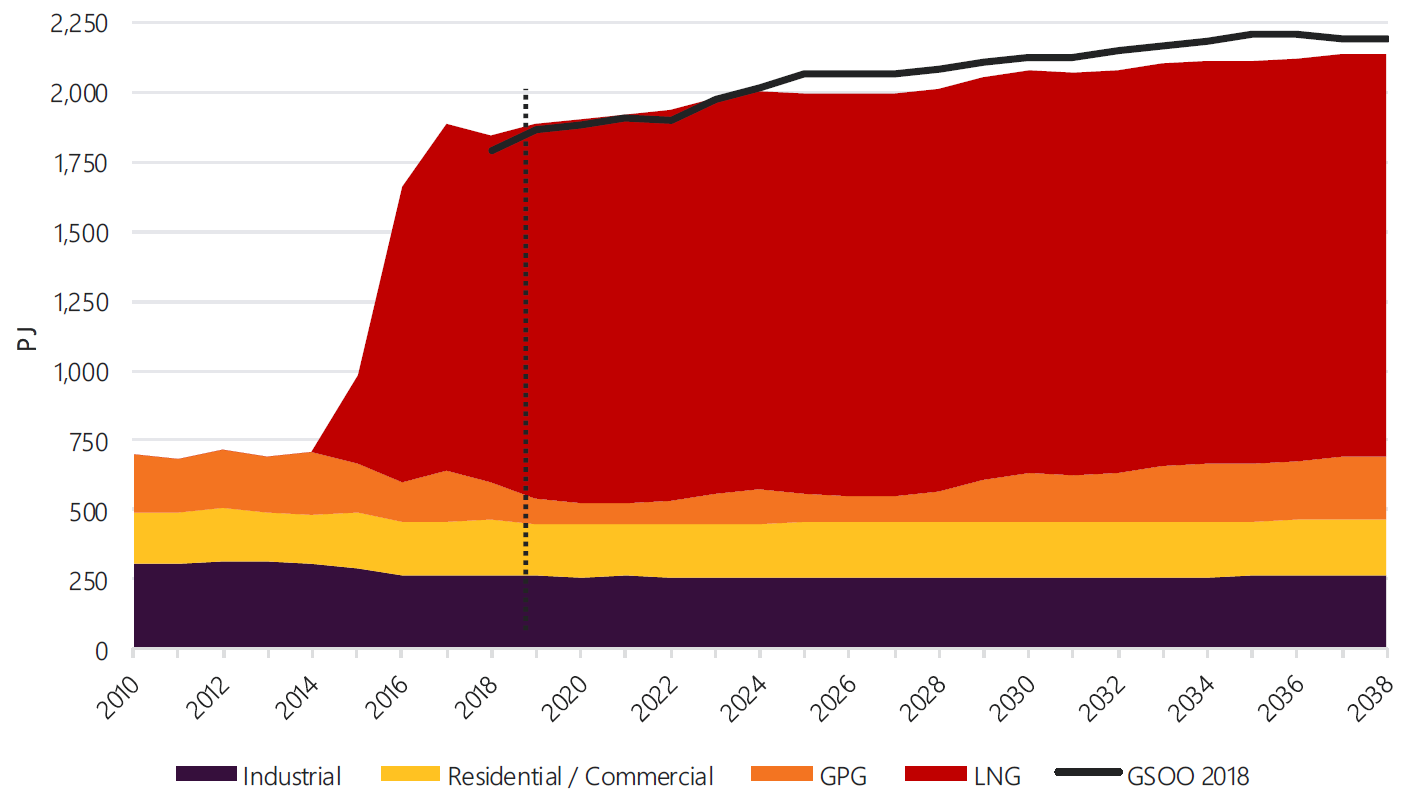 Underlying east-coast gas demand has remained flat, with the only material variation being the consumption of gas in NEM gas-fired generation which is heavily affected by both gas price and electricity conditions. After recent declines, GPG is predicted to increase over coming years. 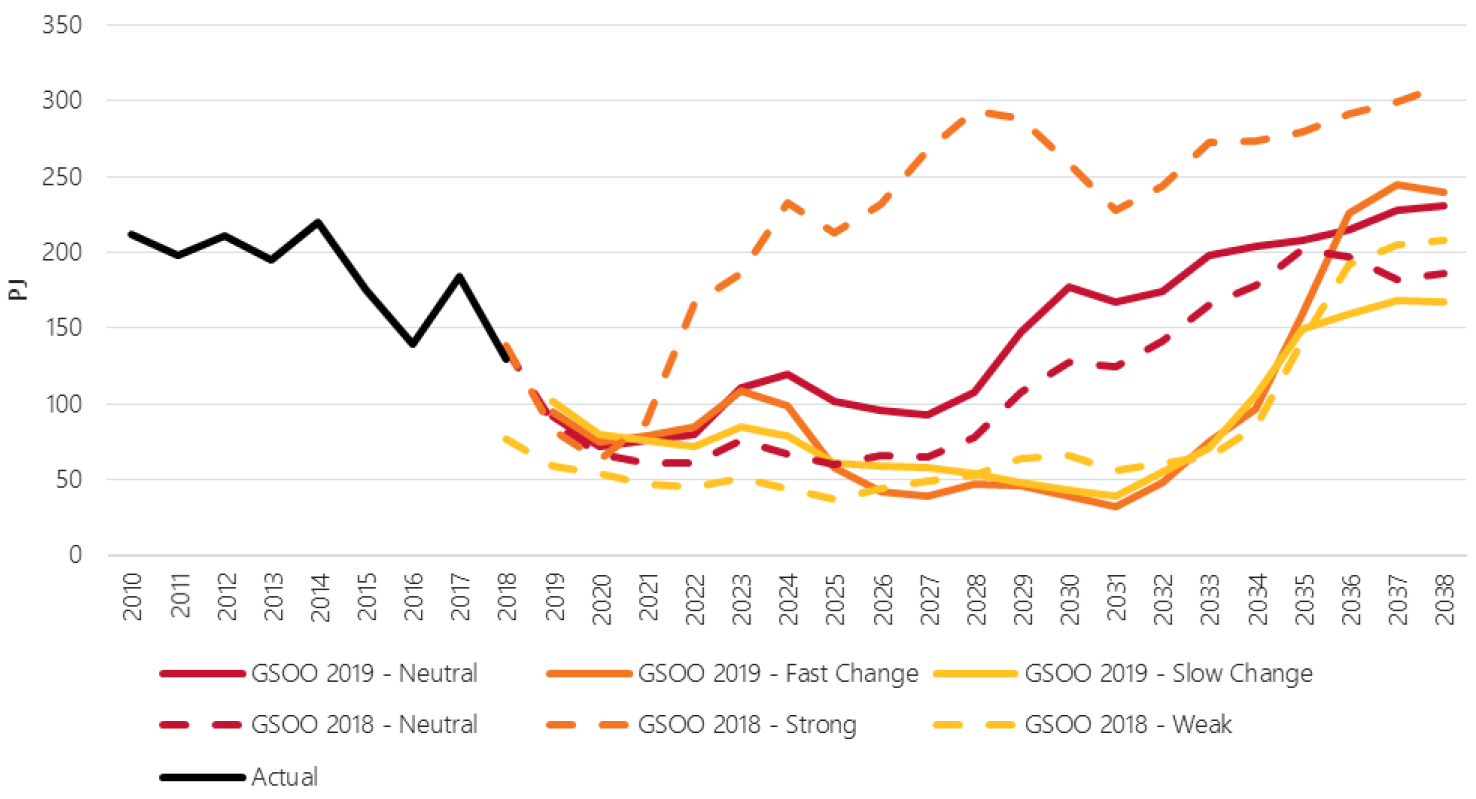 Given the level of transparency in the market, reporting of gas prices is limited, and commentators generally report the Short-Term Trading Market prices as a proxy, noting that they may not be reflective of longer-term arrangements. 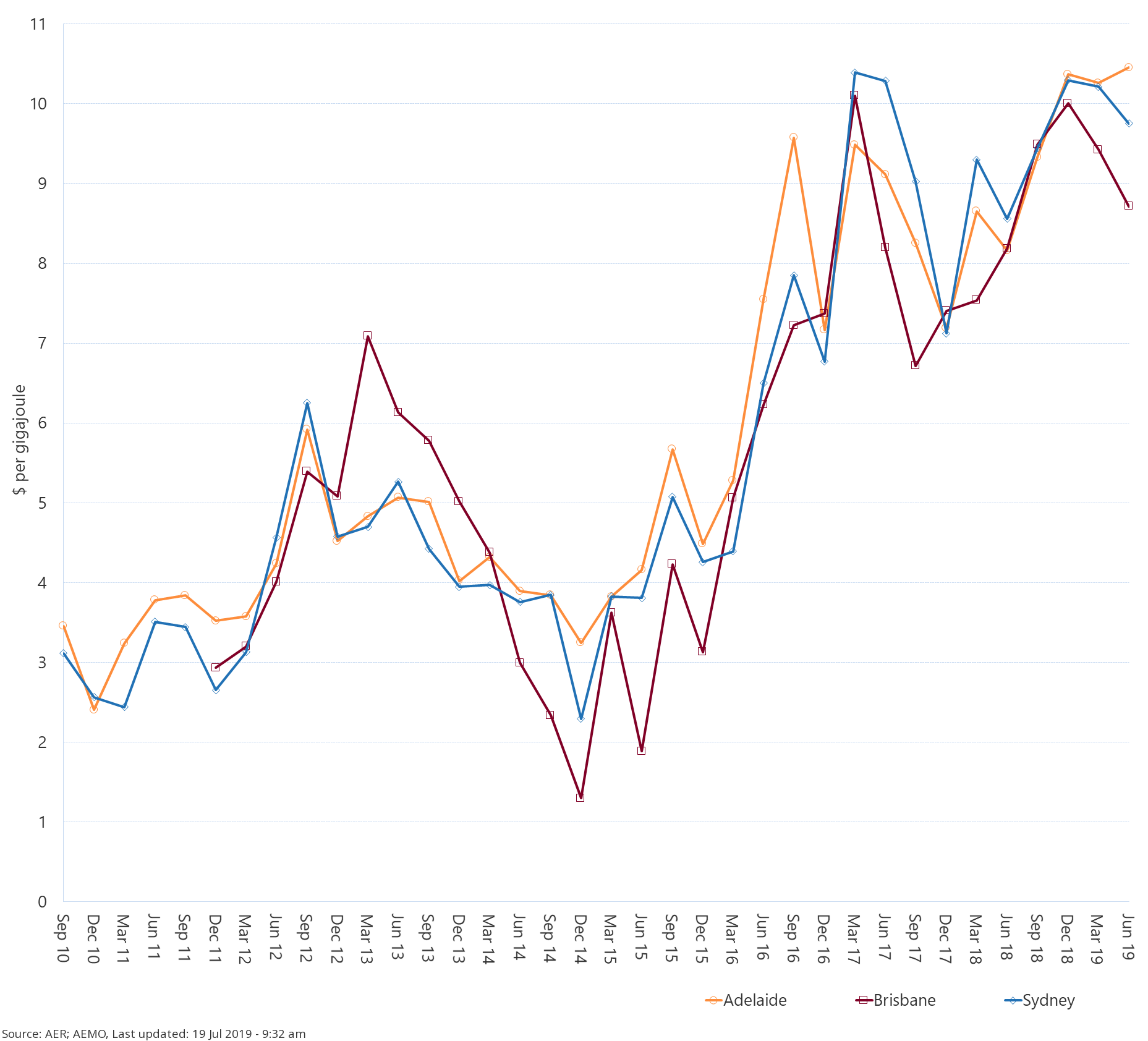 Gas reform has been a focus of government over a number of years. In December 2012 the Standing Council on Energy and Resources agreed to an Australian Gas Market Development Plan, and this was followed in December 2014 by the COAG Energy Council releasing its Australian Gas Market Vision,[15] which built on existing reforms and set out 12 specific outcomes, broken into 4 work streams, as follows:

The August 2017 Energy Council Gas Supply Strategy[20] is a successor to the December 2015 Australian Gas Market Development Plan and was amended by the Council to recognise onshore conventional gas more explicitly, and to include offshore gas and underground gas storage, as part of a more holistic approach to national gas supply, and to meet community expectations in regard to the use of resources. It suggested four focus areas for the states and territories to collaborate, including improving information on gas reserves and production potential, improving public information and improving the regulatory frameworks for gas development.

The implementation of the reform process is now concluding with most initiatives expected to be in place by mid-2020.

Every two years the AEMC is obliged to report to the COAG Energy Council on the state of liquidity in the wholesale gas and pipeline trading markets. The last review, conducted in August 2018,[21]  concluded that liquidity is improving, and will continue to do so as further reforms are implemented.  The next review will be conducted mid-2020.

On 13h April 2015 the Minister for Small Business,Bruce Billson, commissioned the ACCC to hold a public inquiry into the competitiveness of wholesale gas prices and the structure of the upstream, processing, transportation, storage and marketing segments of the east coast gas industry.

The 2016 East Coast Gas Inquiry[22] made a number of findings, including:

This report spurred the gas market reform detailed above, and in April 2017 the Government directed the ACCC to conduct a wide-ranging inquiry into the supply of and demand for wholesale gas in Australia, as well as to publish regular information on the supply and pricing of gas for the next three years. On 6 August 2019 the Government extended the ACCC Gas Inquiry to December 2025.[23]

The ACCC has completed a series of interim reports,[24] making recommendations along the way, and has published a number of reports on individual topics, such as International Prices.[25]

The Interim Report also indicated that the ACCC will, over the course of the Inquiry, conduct a closer review of:

WA has maintained a domestic gas reservation policy since 1979 when it helped underwrite the development of the North-West Shelf LNG project. It currently requires new developments to set aside 15 per cent of their LNG productions for domestic sale, and to offer such gas in good faith to domestic consumers. Given the large size and low costs of the conventional WA LNG export projects, this creates conditions for domestic WA gas to be valued below international prices.

Queensland has its own domestic gas reservation policy in the form of the Petroleum and Gas (Production and Safety) Act (Qld) 2004. It reserves particular petroleum leases solely for supply into the Australian market. The small size of the reservation and the relative development costs mean that the influence upon domestic prices could not replicate the WA situation.

In consideration of such policies, the ACCC’s East Coast Gas Inquiry found that, “[t]he gas supply issues … would not be fixed by a reservation policy; in fact they could be worsened if a reservation policy was enacted which artificially depressed prices in the short term and discouraged investment in new gas supply, thus reducing the likelihood of required supply diversity.”[27]

Its recommendation was that “gas reservation policies should not be introduced, given their likely detrimental effect on already uncertain supply”.[28]

On 1 July 2017 the Commonwealth Government established the Australian Domestic Gas Security Mechanism (ADGSM) to be in place until December 2022, in response to fears of possible shortfalls, highlighted by AEMO’s 2017 GSoO.[29]  The ADGSM allows the Minister for Resources to restrict LNG exports if the Minister has reasonable grounds to believe that there will not be a sufficient supply of natural gas for Australian consumers during the year unless exports are controlled, and that exports of LNG would contribute to that lack of supply.[30] It does not have a price trigger.

At this time the ADGSM has not been invoked, however additional domestic supply has been made available from the exporting companies since the 2017 outlook under the Gas Supply Guarantee (discussed below), arguably influenced by this threat.

In March 2017, Production Facility Operators and Pipeline Operators made commitments to the Commonwealth Government to make gas available to meet peak demand periods in the National Electricity Market. The Gas Supply Guarantee is a mechanism developed by the gas industry to facilitate the delivery of these commitments.[32]

Increased gas market transparency has been advocated by the COAG Energy Council and the ACCC since 2012.  Most recently, in its July 2019 Interim Report the ACCC stated that increased transparency is to be encouraged to facilitate market liquidity, and proposed a series of measures in its Measures to improve the Transparency of Wholesale Prices in the Gas Market – ACCC Recommendations Report.[33] These included expanding its monthly LNG netback price series and reporting on the wholesale gas prices payable by domestic gas users to producers and retailers for contracts longer than 12 months’ duration.

There are significant environmental barriers to onshore gas exploration in the east-coast.

NSW has does not have commercial conventional natural gas resources available, and has relied on coal seam gas for indigenous supply, however new developments, notably Santos’ Narrabri development, have been stymied by “the toughest coal seam gas regulations in Australia”.[34]  These regulations include development oversight by a Land and Water Commissioner, banning the use of BTEX chemicals and evaporation ponds, codes of practice on coal seam gas exploration, and referrals to the NSW Minister for Primary Industries and the Commonwealth Independent Expert Scientific Committee for advice on water impacts.  The Environment Protection Authority is the lead regulator.

In contrast, NT conducted a “Scientific Inquiry into Hydraulic Fracturing”,[35] and concluded that onshore gas exploration, drilling and fracking can occur in designated zones, subject to environmental conditions.  It is now developing regulations for production.

In the future the gas supply-demand balance may be affected by three possible, major influences.

As discussed above, despite recent increases in gas use as a result of LNG exports and population growth, underlying gas consumption has reduced in domestic and commercial & industrial sectors.  Domestic consumption has been reducing due to the displacement of gas for heating and hot water by electricity, as a result of the ready availability of solar panels for self-generation and local requirements for energy efficiency measures in new homes, although this has been partially offset by increases due to population growth. Industrial usage has been most affected by declines in Australian manufacturing, according to the media and EUAA as a result of cripplingly high gas prices, but there are other influences such as labour costs, local demand for products, the exchange rate and international competitiveness which have affected these companies’ decisions.

In time there may be pushes to reduce gas consumption in order to reduce carbon emissions. The ACT Government has declared, in its quest for zero emissions by 2045, that it will discourage the use of natural gas in both residential and commercial uses by removing the mandated requirement for gas connection in new suburbs, supporting gas to electric appliance upgrades and transitioning to all-electric new builds.[37]

Fluctuations in the use of gas for generation

As currently formed, the strategy proposes developing renewable hydrogen,[38] which will foster the production of hydrogen for:

While gas reform has been a key focus, significant barriers to gas exploration on the east coast remain. Removing unnecessary regulatory burdens and lifting restrictions on exploration may provide the right set of conditions for industry to explore and develop new gas resources. The role of gas will remain dependent on its competitive position as a fuel, competing on price and sustainability, and lifting restrictions will assist in this regard.

[5] Reserves represent that part of resources which are commercially recoverable and have been justified for development, while contingent resources are less certain because some significant commercial or technical hurdle must be overcome prior to there being confidence in the eventual production of the volumes.

[38] i.e. hydrogen produced by the electrolysis of water, the power source for which is renewable energy

Setting the mark: Why price limits should change in WA