As well described in the Australian Energy Market Operator’s (AEMO) Quarterly Energy Dynamics (QED) Report, the first quarter of 2021 for the National Electricity Market’s (NEM) spot market was notable mostly for its lack of notability: A very quiet summer with record weak demands and prices. The second quarter has turned out quite the opposite, with fuel costs increasing, unseasonably high demands, an exploding generator, a major blackout, a severe storm, an evacuated coal mine and numerous Lack of Reserve (LOR) notices.

As a simple measure of the how the NEM can turn, the Q2 Queensland average price to date is $135.83/MWh, versus $42.64/MWh over Q1. Given AEMO still managed to write 48 pages about a quiet Q1, it will be interesting to see how many pages the Q2 version of QED will deliver.

This article will not pick apart the nerdy details of any of these complex and interesting events - we’ll leave that to the experts - but will instead reflect on a graph that shows how well the market almost always responds to the NEM’s giant variations, and in particular its large and growing reliance on hydro and gas-fired generation to keep the lights on.

Big swings in the power system

Following heavy rains in Victoria, EnergyAustralia was concerned about water emerging from cracks in the Morwell River Diversion that crosses the Yallourn mine. This had a major collapse in 2012, so, through an abundance of safety caution, EnergyAustralia evacuated the mine on 11 June. Brown coal cannot be stockpiled, so the power station quickly reduced output to conserve the small amount of coal it still had access to, shutting down three of four units, and running the last at reduced output.

Such an event in a coal-fired power station is rare and interesting, so of course it made widespread news, particularly whether if it would affect customer power supplies. However when the system is looked at as a whole, it is interesting to see how relatively small this Yallourn event was. 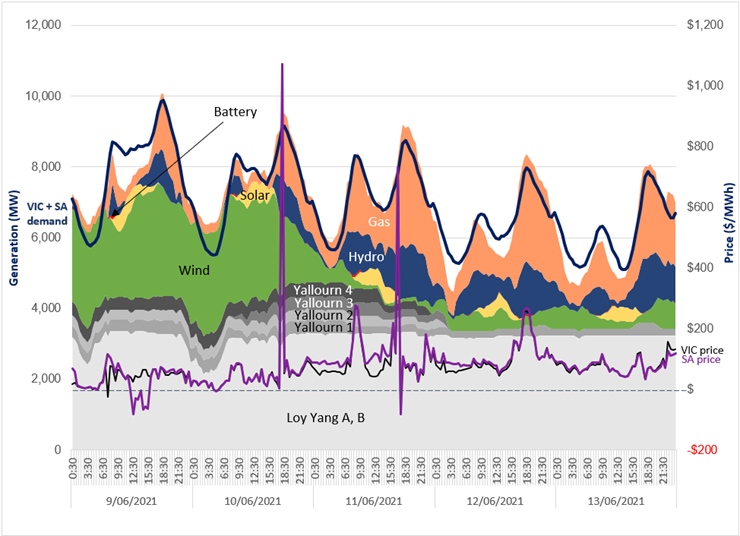 Figure 1 shows the generation across Victoria and South Australia during five days of last week, with the Yallourn mine event occurring midway. Due to the infamously stormy conditions, the period began with over 3,000MW of wind generation, but by the afternoon of 11 June, wind had fallen to negligible amounts. This fall in wind generation in fact dwarfed Yallourn’s 1,200MW reduction.

Such a swing in wind output is not at all unusual. South Eastern Australia experiences alternately windy and calm conditions across its entire geographical area. As such, the infilling of ever more wind turbines into Victoria and South Australia will not diversify its generation pattern. Frequent periods of negligible wind output will remain, interspersed by ever larger lumps of energy.

Meanwhile, customer demand was swinging in even larger amounts. Victorian plus South Australian operational demand got as high as 9,880MW on 9 June, and as low as 5,101MW on 13 June. Such a demand swing is also very normal, in fact in summer it is typically greater.

Gas and hydro save the day

The power system was being hit with multi-gigawatt swings in demand, renewable energy, and, albeit to a lesser extent, coal supply. Yet it managed well, thanks to the role of gas-fired and hydro generation. These resources went from totals as low as 206MW on 9 June, to as high as 4,933MW on the 11 June. Gas and hydro generation made up only 3.2 per cent of Victorian and South Australian generation on 9 June at 12:00 pm , and then as much as 57.6 per cent on the 12 June at 5:30 pm. This is peaking generation in action, quietly doing what it is designed to do: absorbing tremendous swings in the power system. And as renewable energy grows ever larger, peaking generation will be called on to do ever more.

If you use a magnifying glass, you may spot a few flecks of red. This was the contribution of the large-scale batteries that exist in Victoria and South Australia, often spoken of as the backup supply of the future. Despite widespread public interest in them, their role in supporting these swings remain negligible. Their role is sure to grow, but clearly it will take a tremendous investment for them to anywhere match the present leagues of hydro and gas.

While the wholesale market was successfully navigating these great swings, another drama was happening downstream. The storm of the 9 and 10 June led to widespread vegetation damage of networks and resultant loss of customer supply. Figure 2 shows the outages at one time in one distribution network. 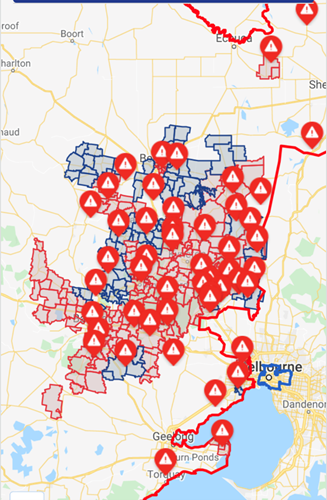 The restoration challenges are so large that some unfortunate customers will be without supply for up to three weeks.

Power system outages in the last mile (or so) is what dominates customers’ experience with supply interruptions. This is shown starkly by the reliability panel’s accounting of the causes of customer interruption. 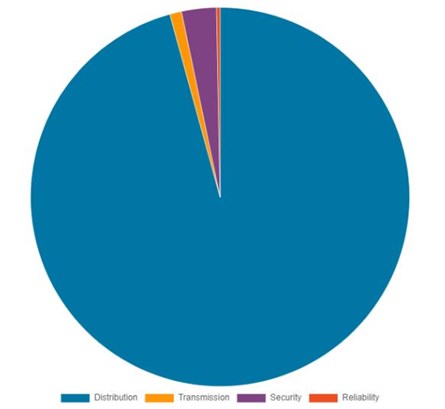 The blue area is the percentage of lost customer energy that is caused by such distribution outages. The purple slice is that caused by widespread “security” events, like what occurred in Queensland on 25 May.

However, governments and market designers tend to focus on “reliability”, which is when the network is fully intact, but there is inadequate generation to meet demand: This is the red slice, but again, you’ll need the magnifying glass to find it. It remains miniscule despite the wild swings in supply and demand that the power system commonly experiences. It is very much thanks to the back-up role of hydro and gas that it remains so.