In late August 2016 AEMO released its report into the challenges and some solutions to maintaining power system security[i], or keeping the power flowing around Australia. The report Future Power System Security Program update outlines the challenges the National Electricity Market grid faces as we transition to high shares of renewable and distributed energy.

The challenges to maintaining power system security have come about because of the changing mix of generation, driven by policy. AEMO has identified the challenges as:

All of these changes are a result of the transition toward a decarbonised economy and the requirement to meet the 2030 emissions reductions target (to reduce emissions by 26-28 per cent from 2005 levels). As the cost of new technology falls and the Renewable Energy Target and jurisdictional policies increase renewable energy generation, meeting the power system challenges will become increasingly urgent. What this means is ensuring security of electricity supply, while also lowering emissions and decarbonising the economy in a cost-effective way.

Four key areas for further research into solutions were identified and immediately progressed by AEMO:

Frequency control involves keeping the network within a safe band of variation to maintain power supply and prevent damage to infrastructure. Traditional forms of frequency control involve governors, which were attached to power stations and automatically moderate and respond to frequency change, smoothing out deviations. Additionally, with high levels of inertia the rate of change of frequency was not as fast as it will be in the future, with lower levels of inertia. Non-synchronous generators, such as wind and solar, do not have this technology and do not currently supply frequency control services. Location, inverters and communication response time are the biggest limitations to new technologies such as batteries and wind providing frequency control services. Fast acting frequency response can be helpful to manage interconnector flows, however it needs to be located close to the interconnector to be effective. Fast frequency response alone (also called synthetic inertia) is not sufficient because it will always encounter a delay for detection and response[iii]. But fast frequency response can reduce the amount of synchronous inertia required to maintain power in large grids. In other words, fast frequency response is complementary to synchronous inertia, the two are only partial substitutes.

Managing extreme conditions on the grid is important to maintain power during heat waves, bush fires or other unplanned events that bring down infrastructure, such as an interconnector. Climate change and rising temperatures add to the risk to electricity infrastructure. These events can be thought of as risks to an amount of electricity supply during a year. The longer it takes to bring back supply, or the greater number of times a blackout occurs in a year, the greater the risk and cost to people and businesses. The chance of extreme conditions occurring is relatively small through the year, however the cost of them occurring is high and very disruptive, so it is important to mitigate the risk.

AEMO’s latest Electricity Statement of Opportunities report forecasts and outlines the risks of losing power in unplanned events and the resources available to mitigate these situations. The 2016 report results show that under a neutral economic and consumer outlook – and in the absence of new generation, network or non-network development – coal-fired generation withdrawals at the levels assumed[iv] may lead to breaches of the reliability standard[v]. The reliability of the power system is measured in the share of energy demand that is at risk in an adverse event (called unserved energy). Figure 1 shows that under assumptions of neutral economic growth and the withdrawal of 800MW of coal-fired generation in Victoria, in 2019-20 South Australia may see breaches of the reliability standard. Given the announced Victorian Renewable Energy Target which will increase non-synchronous generation in Victoria by around 5,000 MW by 2025[vi], it seems likely that AEMO’s forecasts will require measures to address the challenges in South Australia. 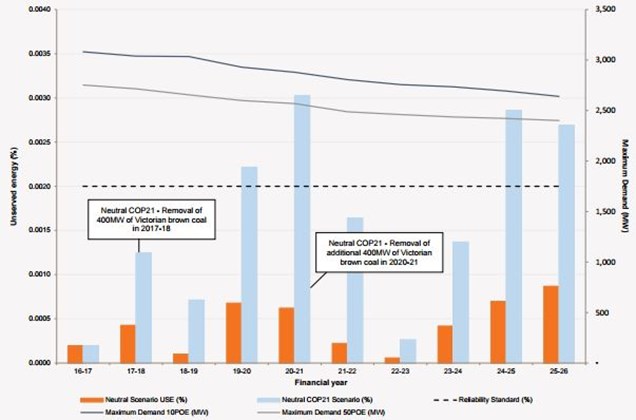 System strength is a term AEMO uses to describe a power network that is robust to deviations, such as faults, and recovers quickly when an issue occurs in the system. Power systems with a high quantity of synchronous generation provide larger fault current and are categorised as strong systems. Fault levels vary throughout a network and are high in areas close to synchronous generation, and low in areas far from synchronous generation. In the NEM, the North West of Victoria is classed as having a weak system. Wind and solar generators that are non-synchronous use converters to match their output to the frequency of the system while maintaining voltage levels and power flows. In a weak system, these can fail through even minor disturbances.

As power generation becomes more distributed, with small scale solar and battery systems making up a larger share of total generation, the network operator will lose visibility of the state of the system and some of the tools to keep power flowing. To maintain power system security, a market operator needs accurate and up to date information on outputs from generation, power flows on transmission elements, and voltages across the grid. A market operator also needs good data on which to base forecasts, so it can plan ahead for outages or seasonal variations in wind and solar generation. In 2015, Europe’s transmission operators successfully mitigated the risk of lost solar generation due to a solar eclipse. The power system needed to continue to provide power through the forecast decrease in solar PV output of 20 GW at the start of the eclipse, and then a sudden power increase of 40 GW at the end[vii] (Figure 2). The planning and forecasts worked well due to the availability of good data on solar PV generation. This in turn was in part due to the higher proportion of utility-scale solar PV than is the case in Australia.

Figure 2: Power generation by country on the day of the solar eclipse in 2015 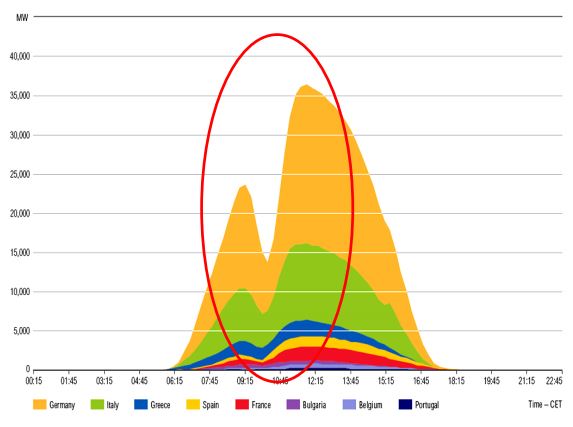 The challenges that AEMO has highlighted in integrating renewables are important, in order to transition Australia toward lower emissions while also maintaining secure electricity supply. Disruptions to supply of electricity, whether at the local or network-wide level are costly for households and businesses. Government policy has driven the pace and scale of change in the transition of the power system, and it is time that policy took a holistic, strategic look at solutions based on good data.

[iv] The level of coal-fired generation withdrawal assumed by AEMO is, NSW Liddell Power Station in 2022 and 800MW of power in Victoria by 2025-26 in response to COP21 Emissions reduction targets.