EVs: UK ponders how to get the (charge) timing right

The United Kingdom’s energy regulator, the Office of Gas and Electricity Markets (Ofgem), has released a Future Insights paper[i] to consider how an increasing number of electric vehicles (EVs) will affect the energy system, consumers and regulatory approaches.

The energy sector regulatory framework was not designed explicitly with EVs in mind and, as Ofgem notes, assumes supply to the home, rather than mobile demand that will draw electricity at home, work or at potentially thousands of locations.

It expects the shift to EVs to challenge key industry arrangements including settlement, how the industry balances and settles demand and supply, and challenge current arrangements for accessing and using the electricity network.

As a result regulation will need to adapt to provide predictability to the EV market and protection to EV users. The scale of uncertainty around the uptake of the new cars, charging behaviours, as well as the blurring of typically separated sectors (energy and transport) also represents a challenging prospect.

Increasing use of EVs could have considerable implications for the energy system, for example inflexible charging could add to peak demand and require expensive network reinforcements.

Ofgem argues that industry should focus on minimising overall system costs for all consumers (including non-EV users) by seeking to make more efficient use of our existing assets, before considering reinforcement.

It argues that the development of new markets that provide flexibility will play a key role by incentivising or automating the shifting of load away from peak demand, even if total demand increases. This means network businesses should not expect to be remunerated for reinforcement alone when more cost-effective solutions exist.

The regulator envisages that flexible charging could enable cost-effective decarbonisation of the transport sector and ensure that the grid is used in a smarter and more flexible way.

Key regulatory considerations include efficient investment in infrastructure, improving access to charging, how costs and benefits are distributed, and technological interoperability.

Overall Ofgem anticipates that the transition to EVs should bring substantial benefits for energy consumers – electricity flows will be increasingly complex and bi-directional, particularly if EVs are used to feed power back into the grid through vehicle-to-grid (V2G) technology.

But elsewhere it expects that impacts associated with EVs will not be distributed equally. This is true, it says, in terms of where flow on the network will change due to EV charging, and how costs and benefits are distributed across different socio-demographic groups.

If EV users choose to charge during peak times, they will impose considerable costs which will be borne by all consumers. An enduring charging regime should ensure costs are distributed fairly and EV users face charges that are reflective of the costs or benefits they are imposing on the system.

“Vulnerable customers, or those who are currently unable to share in many of the benefits of EVs, are likely to object to subsidising more affluent early adopters of EVs,” the paper states.

The least deprived decile of the population accounts for more EV chargepoints than any other decile, with the mean EV user in the 7th decile and the median in the 8th – a strong indicator that current uptake is heavily linked to a person’s socio-demographic status. “This raises concerns regarding how system costs are currently allocated,” Ofgem says.

If charging is managed flexibly all consumers (including those without EVs) “should benefit from a more optimised energy system, and avoided reinforcement costs".

Ofgem also argues that there are equitable arguments for adopting a regime that ensures costs are imposed on those who create them – this can occur with cost-reflective charges for connecting EV chargepoints to the network, and cost-reflective price signals that mean consumers who choose to charge during peak times will pay proportionately for the system costs incurred from their behaviour.

Flexible and fast charging is essential for facilitating the transition to EVs in the most cost-effective way, by enabling all consumers (including those who do not own an EV) to benefit from a more optimised energy system, and avoiding grid reinforcement costs.

EVs in the UK

There is around one public chargepoint for every eight EVs in the UK, but the distribution of these is uneven (figure 1). The number of rapid chargepoints, which encourage drivers to charge their cars while travelling, has grown 900 per cent since 2013, well above the 30 per cent growth in slow chargers. Despite the strong growth in rapid chargers the limited distribution of them in some regions is seen as a likely barrier to EV uptake. 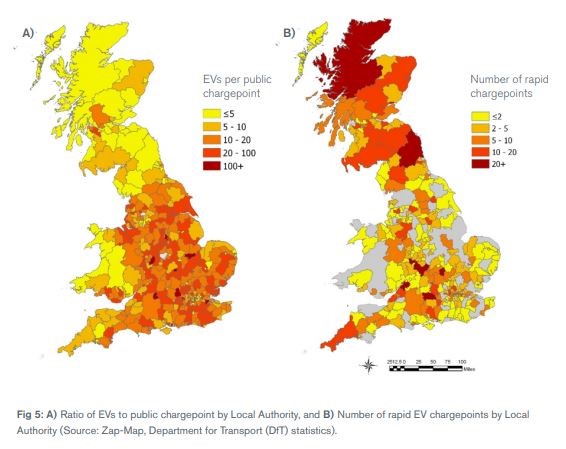 Home is Where the Charge Is

By far the majority of private EV charging currently occurs at home (see figure 2) and at peak demand times, which means impacts on the network are likely to be greater where constraints already exist.

The implications for the grid may mean that some reinforcement is needed, potentially leading to higher costs for all consumers. 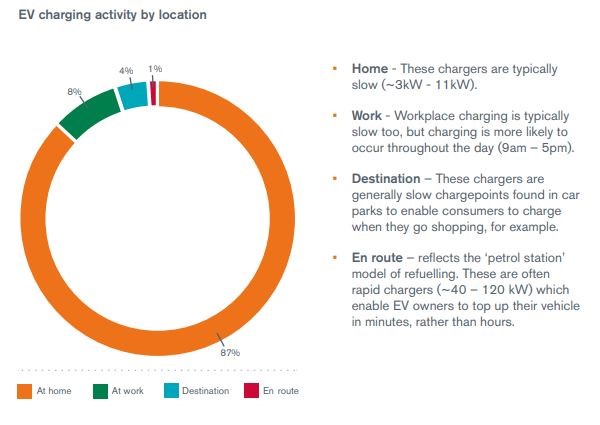 EV charging could be offset by microgeneration if charging happens when solar PV systems are exporting to the grid, and as the economics of storage improves it is expected to allow stored electricity to offset the demand from EV charging and heat pump use.

Ofgem argues that to maximise the benefits of EVs electricity demand, the cars should be integrated in a “smart and flexible way”.

It argues that flexible charging can complement a system with variable renewable generation in two ways:

Ofgem supports the idea that consumers could be rewarded for being flexible with their demand, but also being required to pay a premium if their behaviour adds to peak demand or local congestion – this would then reflect either the benefit they deliver or the costs they impose on the system.

But it does caution that there may be limits to the extent to which price-signals should penalise consumers who are less able to engage.

In assessing the impact of EV charging on the low voltage network the regulator found that:

It also found that experience from retail markets showed that consumers don’t always engage in the market even when there are financial benefits.

In considering how to address this issue it points to numerous options:

In rare cases where flexible charging fails to prevent constraint issues, curtailment of EV charging might still serve as a last resort backstop to avoid outages, although Ofgem sees this as occurring only in extreme situations.

Ofgem has proposed reforms[ii] that will give incentives for customers to charge EVs at the right time. The reforms are intended to free up existing grid capacity to allow new generators, including businesses or other organisations which want to generate their own power on-site, to get grid connected more quickly.

Apr 01 2021
Read Analysis
GET IN TOUCH
Do you have a question or comment for AEC?