EVs: The chicken and egg dilemma

A new US report released last week has refocused attention on the “chicken and egg” dilemma for the development of electric vehicle (EV) charging infrastructure - no one wants to build it until there are more EVs needing it, and the motoring public is reluctant to buy EVs until they know there are more charging points.

The report, produced by the Rocky Mountain Institute, argues that now is the time to refocus on developing EV charging infrastructure because the EV “revolution” is here. In the US EV sales have been growing at a compound annual growth rate of 32 per cent in the past four years and monthly sales data for this year “suggests that the sales rate is accelerating sharply”[i]. It projects that there could be 2.9 million EVs on US roads within five years, which will require more than 11,000GWh of electricity, equivalent to about $1.5 billion in electricity sales.

Car prices, limited model options and range anxiety have long been a block to EV take-up, but those impediments are set to fall within a few years, the institute argues. “EVs are already cheaper to refuel and in some cases, such as high-usage fleet vehicles, they are cheaper to own conventional internal combustion engine (ICE) vehicles.”

High use fleet vehicles are prime candidates for electrification. The report says that the total cost of ownership is already lower for EVs than for conventional ICE vehicles.

The five-year total cost of operation (assuming a discount rate of 10 per cent) for a fleet of 30 Chevy Bolts driving 25,000 miles per year (around 40,000 kms) compared to the cost of running a fleet of 30 compact cars, based on average fleet costs and performance is shown in Figure 1. The main savings from EVs are in their lower maintenance and fuel costs, while their purchase price is higher, as can be seen in Table 1. There is also a substantial benefit from tax credits, but the Institute argues that as battery costs decline and production volume increases, the credits will no longer be needed.

Figure 1: Five year total cost of ownership net present value for a fleet of 30 vehicles in Colorado, ICE vs EV 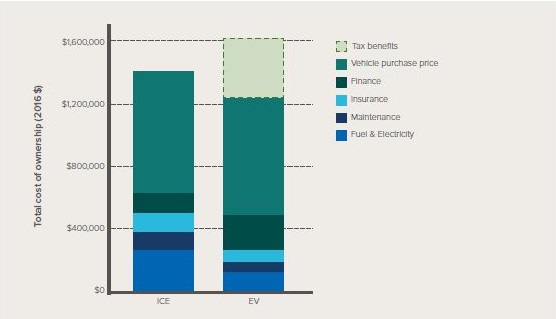 In the five US states considered by the “From Gas to Grid” report – California, Colorado, Hawaii, Ohio and Texas - the cost of charging an EV ranges from $0.03 cents/mile (around 1.8 cents per kilometre) to $0.22 cents/mile (around 13.5 cents each kilometre), compared to a petrol cost of between 0.09 cents-0.13 cents.

Figure 2: Retail cost to EV owner, or employer of EV owner, to charge one mile of EV range under different utility tariffs and DCFC programs 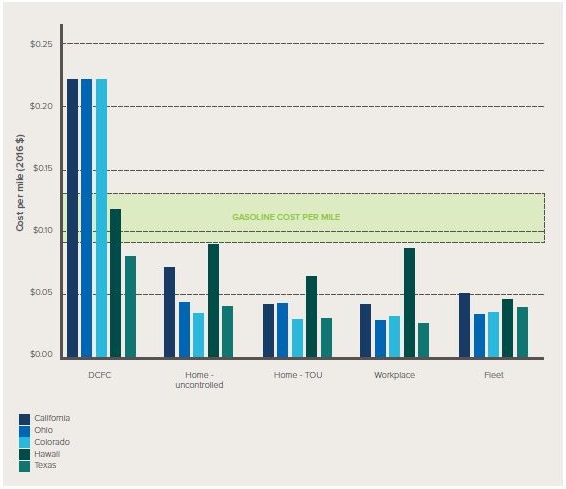 The spread of costs by state is:

The take-up of EVs in each state is shown below, along with the level of charging infrastructure available.

Table 1: EV Takeup by US State and Charging Infrastructure Per Vehicle

There are three types of charging available for EVs:

Level 1 – plugging into a conventional electrical socket and using the vehicle’s inbuilt converter. Can take up to 14 hours to charge.

Level 2 – dedicated rechargers that can be installed at home or other venues. Take up to eight hours to charge. They are suited to charging overnight or where a vehicle is parked for an extended period, such as a workplace or shopping centre.

Level 1 – DC Fast Charging (DCFC) stations. Can provide a substantial recharge for an EV in around 20-30 minutes.

In Australia most publicly accessible chargers provide power for free, but this is expected to change as more infrastructure is rolled out. Exceptions include a handful of paid stations in South Australia and one in NSW on the ChargePoint network, and the RAC's 'Electric Highway' in Western Australia, which runs from Perth to Margaret River in the state’s south-west[ii]. The cost of recharging at the RACWA points is set at 45 cents/kWh, plus $1 per charging session.

ChargePoint, an international commercial EV plug-in charging network, expects the roll-out of DCFC’s in strategic locations like petrol stations to accelerate over the next two to three years particularly on the Melbourne-Brisbane corridor on the east coast and in the urban fringe areas.