State governments increasingly accept that the uptake of zero emissions vehicles (ZEVs) needs their support to create a critical mass.

NSW is the latest state to unveil a range of measures to speed up the purchase of ZEVs, which include battery electric vehicles and hydrogen fuel cell vehicles.

The key limitations to the uptake of ZEVs have been the upfront cost and range anxiety with limited public charging infrastructure. The very limited range of vehicles available locally has also played a part with claims the ZEV makers have been overlooking the Australian market because of a lack of support measures. Transport represents the second largest carbon emitter after the energy sector, so it is understandable as part of their strategies to achieve net zero emissions, that states are looking to ZEV strategy and steps to address these limitations.

State governments are well placed to support ZEVs given land transport infrastructure and regulation is almost entirely their responsibility. The sector is also likely to be more responsive to direct state and local government action, through their regulatory roles in the form of vehicle registration and parking controls.

But this has led the left-wing think tank, The Australia Institute, to declare this week EV policy in Australia is becoming a confusing patchwork of policies and regulations. Behyad Jafari, the CEO of the Electric Vehicle Council, told the ABC he would like to see a national approach to EV policy. “There is massive potential for Australia, in the global shift toward electric vehicles, to do things like make buses, make the batteries, make the technology that supports electric vehicles,” he told the ABC.

So, what has NSW announced?

NSW has taken some pragmatic steps that are expected to encourage more ZEVs on the state’s roads. These include: 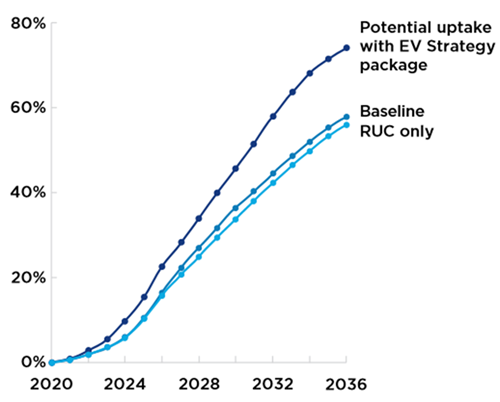 There has been substantial debate about road user charges with concerns that introducing them too early could stifle the uptake of EVs and potentially limit model availability and restrict driver choice[i].

NSW is limiting this risk by restricting the switch until later this decade when, based on its incentive measures, it expects there will be a greater uptake of EVs.

In contrast, Victoria has announced the introduction of a 2.5c/km and 2c/km road user charge for different categories of vehicles as shown in table 1.

This will come into effect from 1 July this year and has been criticised by car manufacturers, automotive and environmental groups.

It is worth noting though that Victoria has exempted EVs from the luxury vehicle rate of stamp duty and provided a $100 discount on registration costs. This is important due to the relatively high cost of even the ‘cheapest’ EVs in Australia.

Victoria also introduced a $3000 rebate for ZEVs and will provide the subsidy to 20,000 vehicles up to the value of $69,000 purchased on or after 2 May this year. The subsidies will be offered in three rounds until the rebates are fully committed for three years.

South Australia had also announced plans for a road user charge as part of its 2020-21 budget, but subsequently put this on hold until 1 July 2022. It is considering adopting a similar rate to Victoria’s, which would mean ZEV drivers, would pay $307 per year on average.

According to the White Paper: “Substitution of a distance-based charge in lieu of duty, for a given amount of revenue raised for eligible battery electric and plug-in electric hybrid vehicles... would provide a significant productivity payoff”.

International experience demonstrates a strong correlation between public charging infrastructure and the uptake of EVs. A majority of Australian economists polled recently (84 per cent of 51) support the suggestion that one of the best ways to encourage EVs is to subsidise public charging points.

In a chicken and egg scenario in these early stages of the EV market in Australia, fast charging infrastructure can present a challenging business model for private sector investors, given low EV ownership - only 0.7 per cent of new car sales last year fell into this category.  Grant and incentive programs can support and encourage both sufficient and efficient investment in fast charging infrastructure.

NSW currently has around 450 public chargers, but many are far apart or have lower charge rates, so the announced plans are aimed at eliminating any range anxiety that still exists.

Victoria in its EV roadmap has committed $19 million to accelerate the rollout of charging infrastructure.

In addition to the NSW Government’s announcement of support for charging infrastructure South Australia’s budget provided $18.3 million to implement its Electric Vehicle Action Plan which includes $13.4 million to support private investment in a state-wide rapid-charging network and $3.6 million for smart charging trials.

SA’s smart charging trials are designed to encourage households and businesses to charge vehicles when there is plenty of renewable energy generation available and low demand.

Adding EVs to the household and business inventory will mean additional load on the distribution network and additional demand on supply from both grid scale and distributed energy resources.  Policies that encourage EV owners to charge vehicles outside peak demand periods, and to encourage EV charging providers to optimize grid utilisation, should be aligned with Government initiatives to avoid unintended consequences, such as that seen with congestion on the high uptake of solar, or with summer peak demand due to air conditioning penetration in the 1990s.  Optimising both distribution network and generation assets will help keep the costs of electricity down in the long term.

Initiatives to encourage a bigger government ZEV fleets are expected to not only support model availability and encourage more manufacturers to being EVs into the country, but also support the second-hand market for EVs with government fleet vehicles typically on sold after around 3-5 years. A secondary market is likely to assist in dealing with the cost barrier to EV uptake.

NSW has allocated $33 million towards shifting the NSW Government passenger fleet to EVs “where feasible”, with the target of a fully electric fleet by 2030. Its EV strategy policy paper has an interim target of 50 per cent EV procurement by 2026.

South Australia is aiming to transition the government vehicle fleet (6800 passenger vehicles) to EVs “where they are fit for purpose and cost effective”.

Governments have a role to play in supporting the uptake of new technologies such as ZEVs. State and territory governments, in particular, are well placed. This is because:

The Commonwealth’s can play a role in areas like fuel excise and vehicle emissions standards, while, more drastically, national governments can ban or limit the sale of conventional vehicles as we have seen internationally. In the absence of national measures, state-based initiatives, while potentially setting up a state-versus-state dynamic, can be effective in encouraging improved customer choices for vehicles. As noted by Victoria’s Energy Minister, let’s not “get stuck in traffic waiting for national action”.

The NSW decision to progressively scrap stamp duty and encourage the rollout of ultra-fast charging infrastructure will go some way to supporting the electrification of transport. And electrification of this sector will in turn go a long way to decarbonising the Australian economy.