Eurovision: Would Germany’s coal exit law be a hit in Australia?

As the world heads towards Glasgow, countries are being asked to review their level of climate ambition and whether they are on track to get there. One country that has developed a clear plan is Germany. Well-known for its use of coal, Germany has developed a formal coal-phase out mechanism that will see all coal-fired generation phased out by 2038.

With Australia currently grappling with how to manage its energy transition, looking overseas may offer some solutions.

Apart from its reputation for orderly policy, Germany has similarities with Australia’s political and energy landscape: 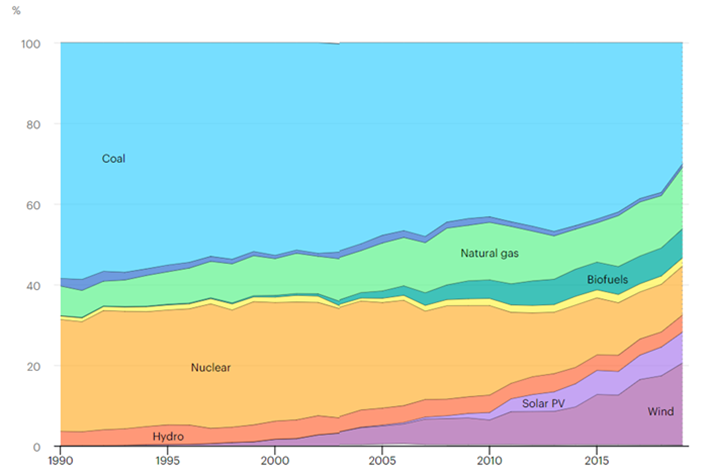 In 2018, the German Government established the Commission for Growth, Structural Transformation, and Employment (colloquially known as the Coal Commission) to formulate a proposal for phasing out coal and structurally transforming coal mining regions. The objectives behind this task were relatively simple:

The Coal Commission presented its Final Report in January 2019, which was then passed through Parliament (with some amendments) in July 2020.

The “coal exit” law commits to phasing out all coal-fired power stations by 2038, subject to a review in 2032 about whether this date can be brought forward to 2035. It lays down target values for reduced coal capacity by 2022 and 2030, as seen in the figure below, and has mandated separate schemes for closing lignite and hard coal power stations. 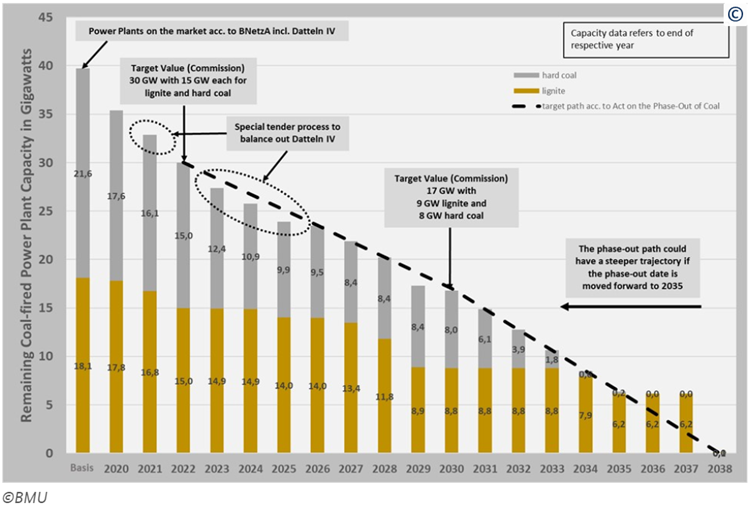 For lignite power stations, the German Government has chosen to formalise public-private contracts with the two plant operators, RWE and LEAG, which are monopoly operators in West and East Germany respectively. RWE will receive over A$4 billion for closing 5GW of lignite plants before 2030, while LEAG will receive almost A$3 billion for closing 3GW before 2030. Closures after 2030 will not be compensated.

The first auction, which took place on September 2020, can be used for illustration. Here, 4,000MW was put out for tender and a maximum compensation amount of A$266,000 per MW was set. While the press release does not declare how many bids were received, it says the tender process was “significantly oversubscribed” and that the “strong competition” led to successful bids being well below the maximum compensation set. In total, eleven bids with a volume of 4,788 MW were awarded tender and the volume-weighted average bid price was about A$107,000 per MW. A$512 million in compensation was awarded overall.

Will this affect energy security?

Those plants awarded tender were required to cease operation from 1 January 2021, following approval from the FNA that their decommissioning would not jeopardise system security. Similarly, Germany’s transmission system operators can request that a decommissioning plant be transferred to grid reserve capacity if it can be proven the plant is important to the transmission system. These checks and balances build upon Energiewende policy before the coal exit law was passed, which was to maintain some lignite or hard-coal plants as a security reserve to cover potential supply bottlenecks.

And, if all else fails, Germany can import electricity from its neighbours.

So, is everyone happy?

No. The coal exit law has not ended the debate, but it has narrowed it. For environmentalists, 2038 is too far away and they are pushing for full coal closures by 2030. Their mood is unlikely to improve given that Germany’s authoritative Energiewende thinktank, Agora, has predicted that “several gigawatts of new gas-fired power plant capacity” is needed in the medium-term to ensure energy supply.

For consumers, their concern revolves around the recognition that phasing out coal will likely increase electricity prices. There are government subsidies to soften these impacts, but it appears more focused on preserving the international competitiveness of electricity cost intensive companies.

For coal workers, the phasing out of coal represents the end of an era and with it, a loss of personal identity for many coal mining communities. The German Government has allocated an enormous A$65 billion financial aid package until 2038 to support communities and their workers transition either into new sectors, or aged retirement.

For industry, the closure schedule provides some clarity for new investments, while FNA’s ability to keep plants in a reserve condition should address reliability concerns. The per MW prices realised to close hard coal seem quite low in the Australian context, however it should be recognised that these plants have been under extreme financial stress for many years. Their fuel is more expensive than Russian gas (notwithstanding a recent gas price spike), while EU carbon permits sit at A$97 per tonne. The Energiewende is thus seen as something of a lifeline to the owners and workers, permitting an orderly exit and transition path.

These tensions will be at the forefront when Germany goes to its federal election this weekend. While there are sure to be many political jabs thrown and taken, the coal exit law has at least put everyone on the same train. The question for Germans is no longer about where we are heading, but how fast and safely can we get there.

What can Australia learn?

For over a decade, arranged coal closures have been discussed, and to a small extent, acted upon within Australia. But true to Australian carbon polity, this has been sporadic and disjointed, with none of the consistent and coherent strategy demonstrated in Germany.

The Gillard Government developed a Contract for Closure policy in 2011 in order to close some coal plants by 2020. This was less sophisticated than the German coal exit law, but nonetheless had similar objectives: to ensure an orderly exit for industry and workers and minimise risks to energy security. Unfortunately, price negotiations with the target stations collapsed and the policy ceased. The then Federal Energy Minister, Martin Ferguson, justified ending the process stating that the Latrobe Valley “now knows that there is no intended closure of any of the coal-fired power operations in the Valley”, and “I must say this gives some certainty to the Valley”. Not long after, however, four of the target stations – Hazelwood, Energy Brix, Collinsville and Playford B – closed in a ‘disorderly’ manner, leading to both reliability and price shocks.

Perhaps learning from this experience, the Victorian Andrews Government formed an arrangement earlier this year for an orderly closure of the Yallourn Power Station in 2028.

There are attractions in applying the German idea to Australia, if the politics could be pulled off. Any closures would have both national and regional implications, so a joint arrangement between the Commonwealth and relevant states would be the appropriate approach.

Germany’s closure dates are very short dated: only one or two years beyond the auction. A longer period, like that arranged for Yallourn, would seem better in the Australian context given there are fewer coal power stations, and they are more geographically dispersed.

Australia has learned the hard way that perfect climate policy should not be the enemy of the good. Germany’s pragmatic approach realises this and is putting the country well on track to meet its climate goals.