European Union emissions increase: How does this compare to Australia?

An increase in renewable energy across the European Union has not prevented energy emissions from rising. The progressive closure of nuclear power stations and a fall in hydro dam levels has resulted in fossil-fuel generation to fill the gap. Despite Germany being the largest renewable energy generator across the EU in 2015, it is still reliant on its interconnectors to balance supply and demand due to the variable nature of new renewables.

Electricity demand increased across the EU in 2015 compared to 2014, which partly contributed to emissions increasing by 0.7 per cent[i]. This increase in the EU emissions comes at a time when Australia also saw a rise in energy sector emissions across 2014-15.

The increase in EU emissions is partially a result of a fall in nuclear and hydro levels, and an increase in total electricity demand, causing fossil-fuel generation to increase slightly in 2015. Non-electricity emissions have also contributed to the increase, influenced predominantly by transport and industrial activities.

Despite wind generation increasing across the EU and Australia’s National Electricity Market (NEM) - by 21.8 per cent and 9.4 per cent respectively - the rise in thermal generation contributed to an increase in emissions in both the EU and the NEM. The current increase in emissions could be a blip that goes against the trend of falling emissions due to the transition in the energy sector currently underway in the EU and Australia. The next few years are likely to shed more light on whether this increase is a one-off or reflects the changing underlying trends in the energy sector.

Figure 1: Percentage change in generation by fuel type and change in Emissions – across the NEM and the EU[ii] 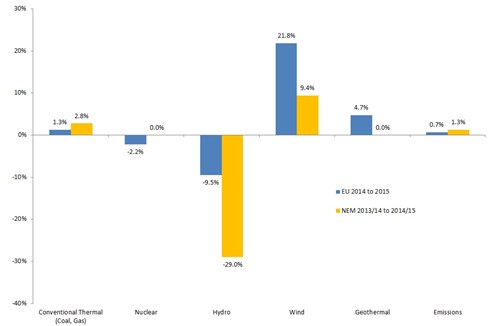 According to estimates from Eurostat, the statistical office of the European Union (EU), CO2 emissions rose in 2015 in the majority of EU Member States, which meant that emissions across the EU as a whole increased year on year by 0.7 per cent[iii]. It is important to note that these estimated CO2 emissions are from energy use, so as well as electricity they cover emissions from transport and industrial activities[iv].

Figure 2: Percentage change in emissions in energy use from 2014 to 2015 across the EU[vi] 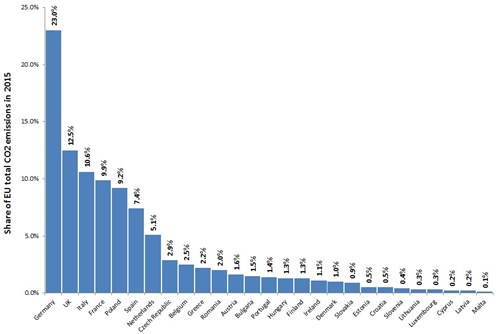 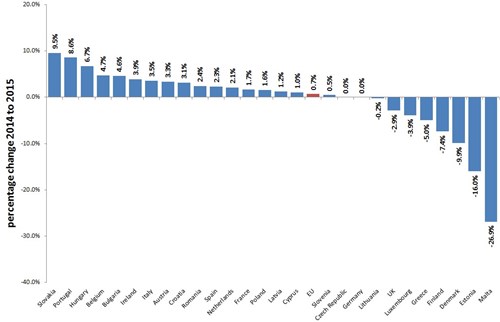 What is causing changes in the electricity generation mix across the EU?

A fall in nuclear and hydro output levels, and an increase in total electricity demand, meant that fossil-fuel generation increased slightly in 2015, which contributed to the increase in EU energy emissions. Electricity demand in 2015 was just slightly above 2014 levels, up 0.4 per cent across Germany, France, the UK, the Netherlands, Belgium, Spain, Portugal, Italy, Denmark, Poland and Greece.

The Fukushima disaster in Japan in 2011 led Germany to close eight nuclear plants immediately with plans to close the rest by 2022. Meanwhile, the UK Government announced late last year that it would phase out coal-fired power by 2025. As a result of these decisions, the expansion of renewables to replace these closures has been significant across Germany and the UK. In its Review of the European Power Sector 2015, based on Eurostat data, Sandbag reports that renewables generation (including hydro) jumped to a record 87TWh in 2015, with over three-quarters of the increase coming in just three countries: Germany, the UK and Italy[viii]. 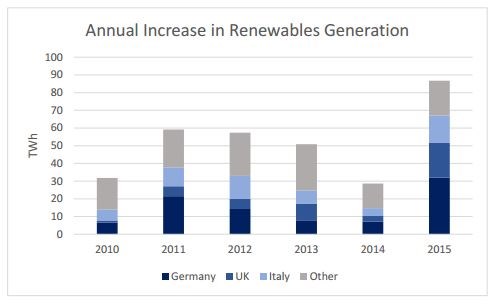 Despite the growth in renewables, emissions increased in Italy, Spain and the Netherlands, while they remained stable in Germany. France typically exports low cost baseload power generated from its nuclear plant to its neighbours, while Germany, in particular, is likely to become more reliant on this interconnector as it continues its Energiewende policy that seeks to replace fossil fuel and nuclear generation with renewables.

In Spain and Portugal lower hydro levels have led to increases in coal generation, while in Italy despite the increase in renewable generation, fossil-fuel generation remained the same.

Because of an overlap between new coal plants beginning operations and older plants still operating prior to closure, there was a large, but temporary, increase in CO2 emissions across the Netherlands. The increased coal generation led to lower gas generation, as well as reduced electricity imports.

How about gas generation?

Gas-fired generation is a technology not specifically targeted for policy support. This has led to the closure of a number of new gas-fired power plants in Europe over the past five years.

In the Netherlands the brand-new 1.3GW Dutch Claus combined cycle gas turbine (CCGT) power station is closing and Vattenfall is only opening one of three units at its new Magnum CCGT plant (representing 860MW of lost capacity). This is the result of subsidised renewable supply across the border from Germany, according to Forbes[xii]. Statkraft of Norway also decided to close two new gas-fired plants because they also were not profitable, while two new state-of-the-art CCGT plants, Irsching Units 4 and 5 (1.4GW) in southern Germany are closing because they have no prospect of operating profitably[xiii].

Despite these closures, gas generation increased in the EU between 2014 and 2015.

In 2015, the growth in renewables across Australia also did not result in a reduction in emissions. A number of factors, such as the repeal of the carbon tax and increased industrial demand, resulted in higher thermal generation in 2014-15 compared to the previous couple of years.

Across the NEM the trend of falling electricity demand and emissions from 2009 was evident well before the carbon tax, which was introduced to encourage emission reductions. 2014-15 was the first year demand increased in over five years, which partly contributed to the change in emissions across the NEM. Analysts Reputex attributed the rise to growth in land-clearing emissions, as well as electricity generation[x]. 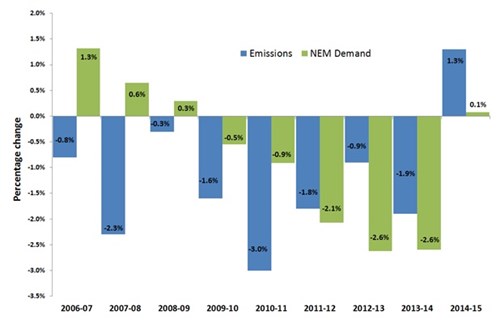 [ii] Source: Eurostat, NEM Review and Reputex Note: For the purpose of the chart above solar was not included for the NEM as it started generating in 2015.