ESOO and reliability: What does it tell us?

An interesting aspect to emerge from the Australian Energy Market Operator’s reliability forecast (better known as the Electricity Statement of Opportunities or ESOO) for the National Electricity Market (NEM) that was missed in the media coverage of the report is that the reliability of the system appears to have improved since the last report (with the notable exception of Victoria during the coming summer).

Figures 1 and 2 below illustrate the shift.

At the same time, this year’s review of reliability in the system was the first to consider the Retailer Reliability Obligation (RRO), which came into effect on 1 July.  That obligation requires energy companies and some large energy users to meet reliability levels if gaps in supply are identified by AEMO and confirmed by the regulator. To meet the RRO the obligated parties have to hold contracts or invest directly in generation or demand response to support the system[i]. AEMO’s task is to request the AER issue a reliability instrument for retailers if AEMO foresees the reliability standard being breached in the fourth summer of its forecast. This has not been requested.  (The reliability shortfall in Victoria for the coming summer is too close for a reliability instrument to be issued.  This is discussed further below.) 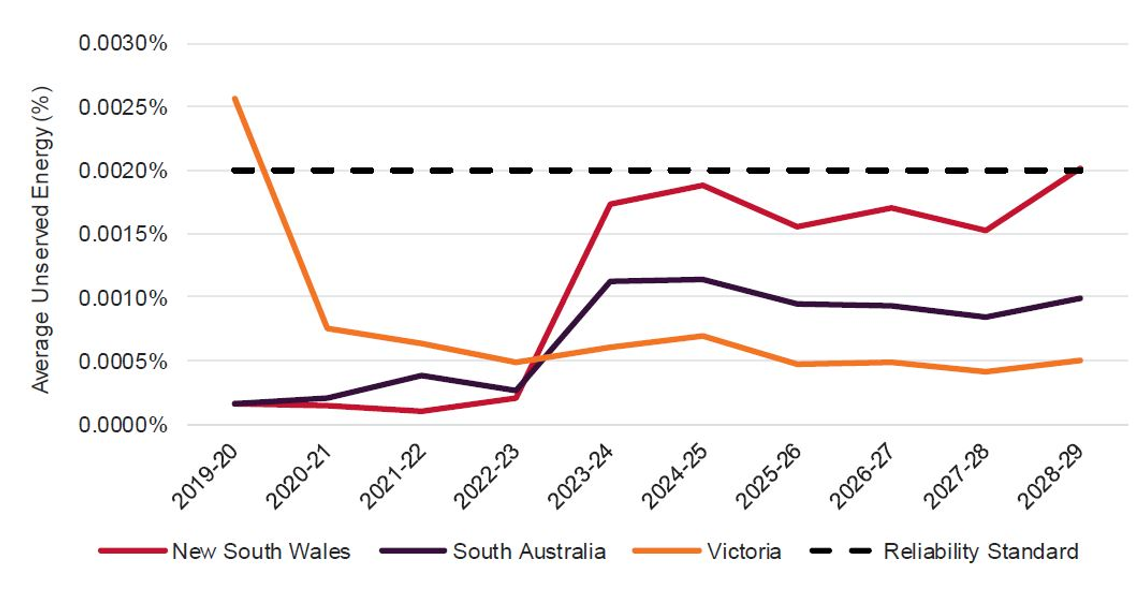 Nevertheless, the report emphases tight supply in the NEM and particularly in Victoria in the coming summer. Victoria’s outlook is clouded by the unplanned outage of units at Loy Yang A2 (500MW) and the gas-fired Mortlake peaking plant (259MW). While the owners expect them to return to service in mid-December, ahead of the peak summer demand, AEMO has factored in the risk of one or both units not being available as forecast.

Its assessment assumes a 30 per cent likelihood that Loy Yang A’s unit will extend across summer and a 60 per cent probability for the Mortlake unit. The report doesn’t details how such probabilities came about – and possibly can’t due to confidentiality concerns - but presumably they are an expert judgement based on knowledge of the nature of the repair tasks involved.

This appears to be the first time a reliability forecast has applied such probabilities: outage dates provided by the owners are normally taken as fixed. It has become possible thanks to the adoption of probabilistic forecasting techniques in recent years[ii], so that the effect of such uncertainties upon the coming summer’s reliability forecast can be directly assessed.

This assumption leads to an expected unserved energy (USE) level of 0.0026 per cent for the coming summer, above the reliability standard of expected USE not exceeding 0.002 per cent. The dramatic improvement in Victoria’s outlook for the following summer; 0.007 per cent, shows the impact of the assumed probabilities above.

The assessment also assumes that two Torrens Island A units (2 x 120 MW) in South Australia would not be available over summer. AGL had planned to close the two units by November this year, but this has now changed to September next year subject to South Australian Government approval[iii]. The decision was taken to help mitigate the risk of the Loy Yang A and Mortlake units returning late and to ensure AGL’s planned 210MW gas-fired Barker Inlet power station was operational before the Torrens Island units closed.

If approved, AEMO estimates that assessed USE levels in Victoria would fall by about 0.0006 per cent to a level only just over the 0.002 per cent Reliability Standard.

Yet in its headline forecast, AEMO’s has applied effectively a zero probability of success in AGL obtaining this approval.

A further complexity is that reliability for the first two years are also published weekly by the MTPASA process. This is understood to not have the capacity to apply a probability to a generator’s return to service date, and so its outputs are likely to significantly diverge from the ESOO’s.

Elsewhere AEMO’s assessment indicates that New South Wales will meet the reliability standard after the closure of the coal-fired Liddell power station, although unsurprisingly USE will then increase. The power station was previously slated to close in 2022, but AGL informed AEMO earlier this month that the first unit will close in April 2022, while the remaining three units will close in April the following year[iv]. Prior to this extension there had been speculation that AEMO might trigger the RRO for the 2022/23 summer. Given the standard is now not forecast to be breached even in the 2023/24 summer, it seems that the RRO would probably not have been triggered even without the extension.

AEMO’s assessment presumes no new investment in generation, transmission or demand response beyond what is already committed, which means it does not include the Queensland to NSW Interconnector (QNI) or the Victoria to NSW interconnector (VNI) projects, because they are yet to receive full regulatory approval.

So additional supply or transmission options are likely to emerge in the ESOO timeframe which should provide additional confidence of supply.

A key factor in reliability risks is likely peak demand levels for each NEM region, particularly the 10 per cent probability of exceedance (POE) forecast[v]. The 2019 ESOO demand forecasts for the coming summer have not shifted much from the previous ESOO (apart from Queensland which has had growth in peak demand), and are now expected to grow more slowly in future years, which will have contributed to this year’s more benign ESOO outlook.

AEMO also considers the expected summer and winter available capacity over the 10-year modelling horizon. This provides an expected capability of the units during temperatures consistent with the 10 per cent POE maximum demand for each region.

It also collects information from all generators via an annual survey on the timing, duration and scale of historical unplanned forced outages, which is then used to calculate the probability of full and partial forced outages for each financial year[vi]. The USE forecast is extremely sensitive to these parameters. These were greatly increased by AEMO last year (see Moving the goalposts: What changed in the ESOO?, EnergyInsider 20 September 2018) and were slightly further increased this year.

AEMO comments that “Analysis of this historical outage data has affirmed that some categories of plant have seen a deterioration compared with the longer-term historical performance. This is reflected in the 2019 ESOO modelling by using the four most recent years of plant performance.

Figure 3 shows a comparison of the rates of AEMO’s entire historical dataset (July 2010 to March 2019) and the average for the previous four years with markers to show the single year outage rates. The biggest discrepancy that AEMO has found is for brown coal with the recent outage rate showing a 2.5 per cent increase in the full forced outage rate for the most recent four years compared to the nine-year average.

The ESOO summary commentary focused on the risks posed by older fossil fuel plants becoming less reliable. However the discussion in the relevant chapter describes the recent surveying process carried out by AEMO that found:

In two cases, power station owners provided feedback on exceptional outages that occurred in one of the historical years sampled, along with justification why those outages would be inappropriate to apply in the calculation of future forced outage rates. In both cases, AEMO accepted this evidence and adjusted the calculation of historical outage rates accordingly.[vii]

This is a very sensible decision, because AEMO’s decision to collate outage statistics from only four years of history puts it at risk of being skewed by abnormal events.

Based on this analysis across these units, there does not appear to be a marked systemic rise in either:

In addition, the Generator Report Card discusses (with a particular focus on 2015-2018) the extent to which data published publicly by AEMO can be used to infer forced outage rates for coal plant.  In this case the statistics also include data for the Northern and Hazelwood stations.  With respect to calculated trips, the authors note:

“The assessments for 2017 and 2018 do indicate slightly higher percentages for both black and brown coal units, but the data is not indicating a large increase in reliability failures.  Note that this would also be skewed by the fact that the results for Northern and Hazelwood are included for the earlier years.”

.. though it should be noted that the aggregate number of outages reduced in 2017 and 2018 whilst the number of trips did not reduce as much (hence the higher percentage).

In our EnergyInsider article last week we included one figure from the Report Card showing (in 2016-2018 years) most of the assessed generation trips occurred at lower temperatures.

As part of this year’s ESOO AEMO has flagged the potential need for a change in the reliability standard.

AEMO is arguing that having a standard purely in terms of statistically “expected” USE runs the risk of having too many outcomes with “unacceptably” large amounts of load shedding.

AEMO is therefore arguing that the threshold should be shifted to a level of load curtailment whose risk of exceedance should be less than a 10 per cent chance.

The validity of the existing reliability standard was reviewed last year by the Reliability Panel. Panel members represent participants in the NEM, including consumer groups, generators, network businesses, retailers and AEMO.

In its most recent assessment the Panel found that the standard and its settings were still achieving their purpose and were likely to continue to do so.

The Panel acknowledged that there are a number of changes and potential changes to market and regulatory frameworks underway that could be relevant to investment decisions and therefore could impact the effect of any revised reliability standard in the near term.

It also noted that stability in market frameworks is extremely important in the current environment but said that it would continue to work with AEMO over its concerns about the appropriateness of the current reliability standard.

Before coming to that conclusion, AEMO submitted its view to the panel that the reliability standard should be changed[viii] with arguments similar to those flagged in the 2019 ESOO. Despite the Panel’s rejection of this approach, the 2019 ESOO incorporated a re-forecast of reliability against AEMO’s preferred standard. The chart below shows that the proposed enhanced standard would be breached, or close to breached, in the south east mainland regions from 2023-24, and so, if it were to become the reliability standard, would likely trigger the RRO. 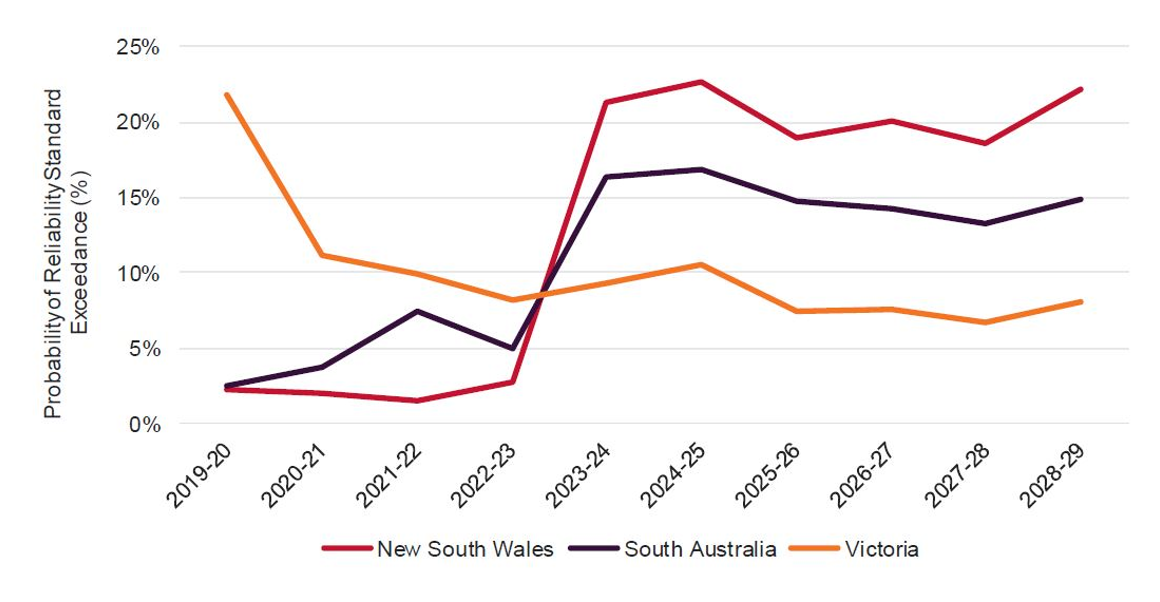 [iv] Schedule for the closure of AGL plants in NSW and SA, ASX Announcement, 2 August 2019

[v] A probability of exceedance (POE) refers to the likelihood that an maximum demand projection will be met or exceeded. The various probabilities (generally 90%, 50%, and 10%) provide a range of likelihoods that analysts can use to determine a realistic range of power system and market outcomes. The maximum demand (MD) in any year will be affected by weather conditions, and an increasing proportion of demand is sensitive to, for example, temperature and humidity conditions. For any given season a 10% POE MD projection is expected to be exceeded, on average, 1 year in 10.

The AEMC’s residential electricity price trends report shows the ongoing fall in power prices for households. We take a look at the report, what’s behind the price reductions, and break down costs across the states.