Blowing hot and cold: Weather impacts on the NEM

With the energy transition underway in the National Electricity Market (NEM) it is expected that it will become more and more dependent on and subject to weather conditions. Previously the main impact from hot or cold weather was its direct impact on demand – either for cooling or heating homes. But an increased distribution of higher temperatures and more extreme heatwaves, as well as changes in the generation mix, are expected to have an impact on the NEM in a number of ways.

Based on analysis of performance data for the NEM over the past 20 years a Generator Report Card has been produced by Paul McArdle, from WattClarity, and Jonathon Dyson, Greenview Strategic Consulting. This has highlighted the potential impacts of the increasing influence of weather on our power supply. We take a closer look.

Periods of higher temperatures will continue to drive up demand, particularly through our use of air conditioners, and supporting this peak demand will require lots of dispatchable generation. High temperatures reduce the performance of most types of generation, as well as the carrying capacity of the networks.

In terms of higher temperatures and its impact on different large-scale generation technologies, the report notes that:

There has been additional concerns about increased unreliability of coal generators when temperatures are higher and over the past few summers there has been increased commentary and a higher focus on the performance of coal units on hotter days. The Generator Report Card looks at the past three years (2016-2018) to see if there is an indication of additional unit trips at higher temperatures (see figure 1).  The data pulled together “does not generally support the hypothesis that generation trips occur more during hotter weather”, although the authors note that there is still a strong and growing need to continue to monitor these types of metrics moving forward. 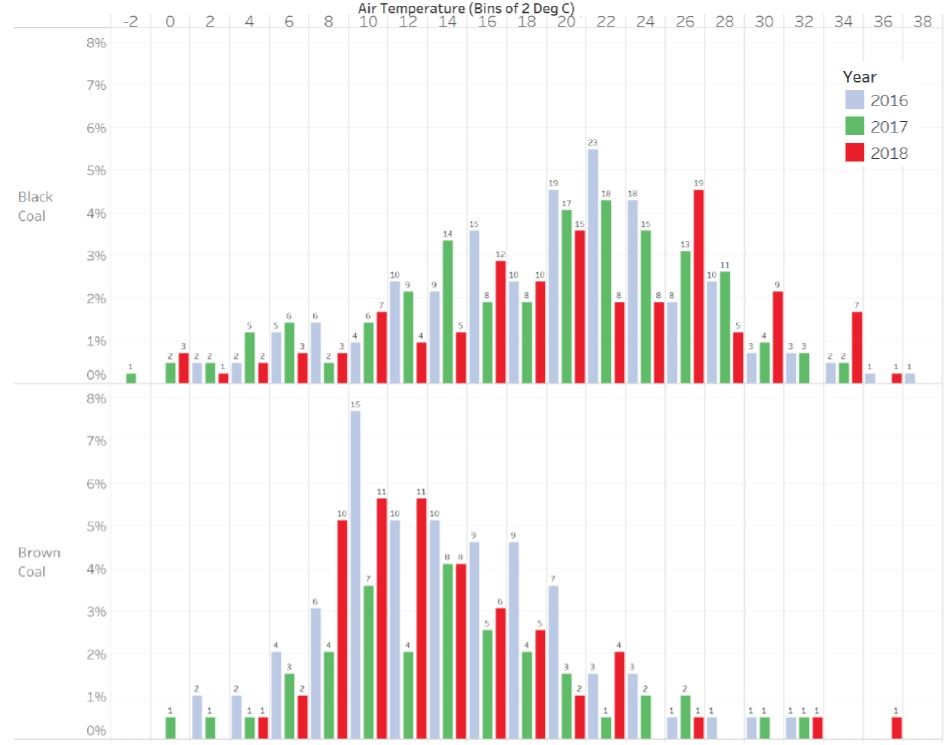 Note the difference in the shapes between black and brown coal shown in figure 1 is mainly just a reflection of the warmer average temperatures in Queensland/New South Wales compared to Victoria/South Australia.

Overall the report card notes that while there are well understood effects of high temperatures on plant outputs, it does not appear that plant failures as indicated by unit trips are disproportionately occurring at higher temperatures, contrary to some public commentary.

But given the consequences and impact of a plant trip is higher in hotter weather given higher demand, there is a greater focus on unit performance during times of heat stress. And in the case of coal and other more traditional plant this is likely to be compounded by the reductions in the amount of dispatchable plant available in the NEM.

High temperatures are not the only weather-related conditions the power system needs to be aware of and account for, the report card notes.

Drought and water management will be critical. The impact of recent droughts include:

With over 6000MW of the NEM’s 8000MW of hydro capacity shared between Snowy Hydro and Hydro Tasmania,  their careful management of storage levels is critical.

The importance of wind and solar generation to both wholesale prices and power system forecasting in the NEM has been well understood for nearly 10 years, but will continue to increase, the report notes.

“In order to understand wind generation, wind speed, direction and humidity are combined with plant availability to produce an estimate of what can actually be delivered at any point in time. Similarly, wind turbines will generally commence operations at approximately 3 m/s wind speed and will need to cease operations between 23 – 28 m/s of sustained wind. Both humidity and wind direction can alter the efficiency of the wind harvesting process.

“For solar generation, time of day, time of year, humidity and irradiance are the key weather factors that must be well understood before energy production parameters from the panels or inverters can be considered.

“It is this continual understanding that the level of production from a wind or solar plant is so temporally linked to the prevailing weather conditions, that is both the opportunity and risk associated with renewable generation. While this may seem obvious, it reinforces the general lack of control of the primary energy source which is why many power systems around the world have struggled to integrate renewable generation.”

It reinforces the need for correct market structures. The report comments that even if battery storage is added to facilities, it is likely to provide backup only in the order of several hours rather than days.

“Traditional methods have previously revolved around forecasting demand (with typical ‘feels-like’ temperature profiles), generator unit commitment (based on typical operating cost) and then matching supply and demand (given the above ‘energy-is-stored, ready-to-use’ suppliers) to determine an expected price given the prevailing network constraints. Random numbers were often added to calculate unknown forced outages for generators.”

Finally all these parameters will need to be churned through forecasting models to determine likely spot outcomes, which in turn inform the contract market and risk profiles.

More on the Generator Report Card can be found here