A new report by EnergyQuest warns that LNG import projects are “urgently needed” in Melbourne and Sydney before 2026, to counter the risks of a growing shortage of gas in the southern states. This in turn may impact the contribution of gas-fired generation in our energy mix at a time when we anticipate more gas generation being needed to assist the transition to a lower emissions grid.

EnergyQuest’s East Coast Gas Outlook to 2036 report shows that gas production in NSW, Victoria, South Australia and Tasmania will be less than demand by 2022. By 2025, the annual gas production from offshore Victoria will more than halve, dropping to 146 petajoules (PJ) from 336 PJ in 2018.

Supply from Queensland would need to increase to almost one third of southern supply to fill this difference; however, EnergyQuest warns that more Queensland gas would only provide temporary relief.

“We also expect Queensland gas production to start declining from 2025, due to a shortage of quality gas resources,” EnergyQuest Chief Executive, Dr Graeme Bethune, said. “The east coast faces a double whammy of insufficient gas in both the north and south.”

According to the report, more reliance on Queensland gas will push up the wholesale price of gas delivered to Sydney and Melbourne to at least $10-13 per gigajoule (GJ) and for longer.

This obviously will have implications for the share of gas power generation (GPG) in the National Electricity Market (NEM), which has already been progressively declining since 2018, according to the Australian Energy Market Operator (AEMO)[i].

Figure 1 shows that electricity supplied by GPG reached its lowest quarterly average on record for the current GPG fleet (an average output of 3,184GWh, which is the lowest level since 2006). 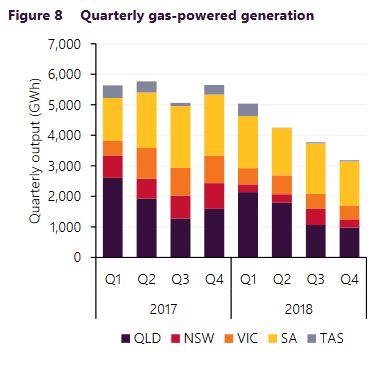 AEMO’s Quarterly Energy Dynamics Report states that this is due to increased penetration of variable renewable energy (over 3GW of large-scale VRE commenced generation in the NEM during 2018), relatively high hydro output in 2018, and rising domestic and international gas prices in 2018.

EnergyQuest in its EnergyQuarterly December 2018 showed that gas use for NEM power was down 11.4 PJ in the third quarter of 2018 compared to the corresponding period 12 months earlier. Overall, this equated to a 25 per cent decrease in gas use for power generation with falls in all states. Like AEMO it points to key drivers being, increased wind and solar and hydro as higher wholesale gas prices. The drop in the third quarter of last year meant GPG’s share in the NEM fell from 9.5 per cent to 7 per cent.

In its latest assessment released this week, EnergyQuest found that the southern states’ need for a new permanent source of gas supply can only be met by proposed LNG import projects, which provide long-term supply confidence and transparent pricing. EnergyQuest says that blocking LNG import projects will increase prices, and instead they could provide increased competition in the east coast gas market. In addition to imports, the development of domestic projects is also critical, according to the report, which it states are slowed by political uncertainty and lengthy regulatory processes.

“LNG importing is not necessarily forever. Both Argentina and Egypt went from exporting LNG to importing and are now back into exporting following substantial gas discoveries,” Dr Bethune said.

During 2018 both domestic and international gas prices have been elevated. AEMO’s Quarterly Energy Dynamics Report shows that there were record wholesale gas prices despite low demand during Q4 of 2018.

During the quarter, Victoria’s Declared Wholesale Gas Market (DWGM) and the Short Term Trading Market (STTM) in Adelaide reached the highest average spot gas prices on record. The second highest on record was in the Brisbane and Sydney STTMs, and the Gas Supply Hub (GSH) (Figure 1). There was a 2-5 per cent increase in the price of trades over the quarter, with prices closing between $10.45-$10.95/GJ across the various 2019 products. 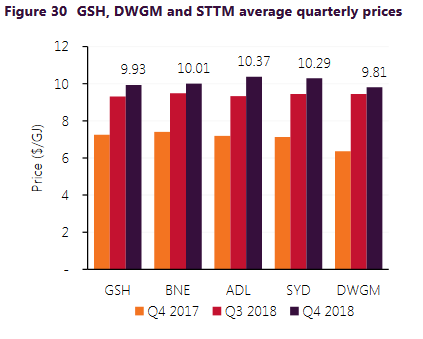 AEMO states the increase was influenced by:

Looking to the US

The price of gas is also a key factor in the share of gas in the US generation mix. Natural gas makes up a larger proportion of the US generation mix (34 per cent), compared to Australia (11.8 per cent) for 2018. Recently the US Energy Information Administration (EIA) noted the mix of fuels used to generate electricity in the US has changed in response to differences in the relative costs of electricity-generating technologies and their fuels.

And the EIA’s most recent Annual Energy Outlook (previously covered here) shows that this is particularly significant for natural gas, which is largely influenced by natural gas prices.

The EIA report provides modelled projections of domestic energy markets from today through to 2050. The agency uses the National Energy Modelling System, which looks at interactions of economic changes and energy supply, demand and prices, and includes side cases that represent different assumptions to reflect possible future events in the US energy markets.

The report’s baseline - or Reference Case - assumes trend improvements in known technologies and acts on the assumption of current laws and regulation. In 2018, natural gas accounted for 34 per cent of total electricity generation, and it is expected that this share will grow to 40 per cent by 2032 and then remain at around 40 per cent throughout 2050. Relatively low natural gas prices are expected to lead to more use of existing plants as well as increased natural gas power plant construction. 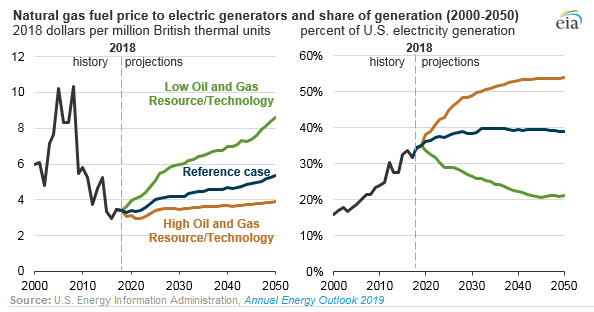 Natural gas exceeded coal in 2016 as the fuel most used to generate electricity in the US, and in the EIA’s Reference Case, it continues to lead US electricity generation throughout the projection period (Figure 4). It is expected that the rise in natural gas will support increasing consumption in the electric and industrial power sectors as well as higher levels of exports. Natural gas prices also remain relatively low and steady during the period (when compared with historical prices) leading to its increased use, and as such, electricity generation shares from coal and nuclear gradually decline as they become less cost competitive compared with natural gas and renewables. 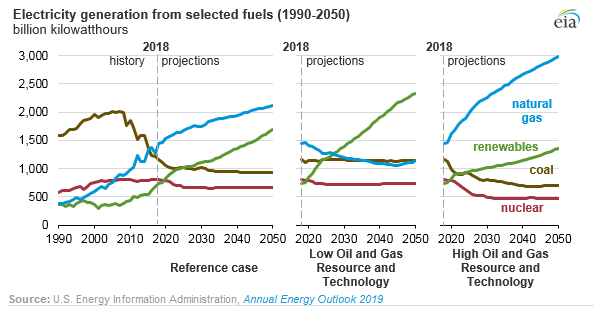 In the High Oil and Gas Resource and Technology case, the share of natural gas-fired generation is significantly higher (when compared to the Reference Case) with natural gas-fired plants additionally surpassing renewables as the leading source of new capacity additions.