A new report shows that while the US economy continues to expand, the country’s energy consumption remains relatively flat due to increasing energy efficiency.

As a result, the US is expected to be a net energy exporter by 2020 – the first time in 67 years – due to increasing production largely from crude oil, natural gas, and natural gas plant liquids (NGPL).

The US Energy Information Administration’s (EIA) most recent Annual Energy Outlook provides modelled projections of domestic energy markets from today through to 2050. The agency’s projections use the National Energy Modeling System, which looks at interactions of economic changes and energy supply, demand and prices.

The modelling includes six side cases that represent different assumptions to reflect possible future events in the US energy markets. Here we focus on the report’s baseline - or reference case - that assumes trend improvements in known technologies. It does not predict future energy policy and acts on the assumption of current laws and regulation.

Natural gas experiences a 5 per cent increase in electricity generation to represent 39 per cent of total US generation by 2050 (Figure 1). This rise in natural gas supports increasing consumption in the electric and industrial power sectors as well as higher levels of exports.

Natural gas prices remain relatively low during the period (when compared with historical prices) leading to its increased use. However commercial and residential natural gas consumption remains flat across the projection period (Figure 2).

The continued development of tight oil and shale gas resources supports growth in NGPLs, which reaches 6.0 million b/d by 2029 and makes up almost one-third of cumulative U.S. liquids production by 2050. 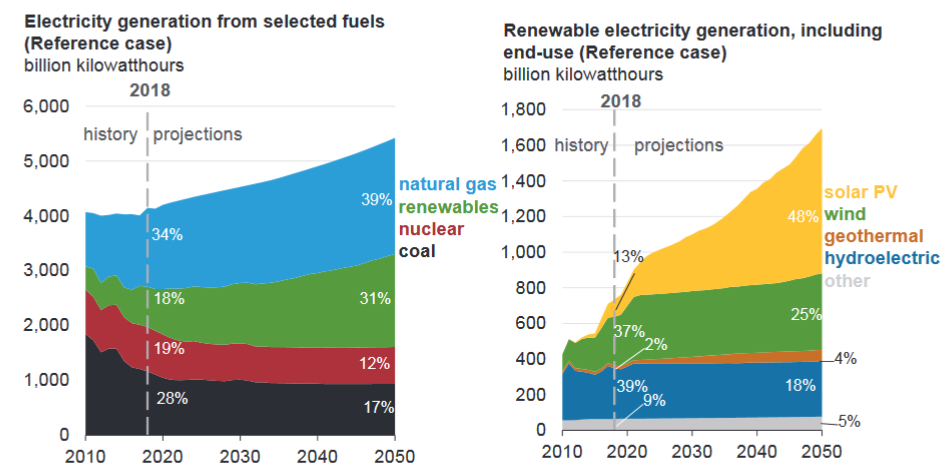 Renewables, including hydro, see the largest electricity generation percentage jump from 18 per cent to 31 per cent. This growth is helped by government policy, declining technology costs, and the improving performance of solar and wind technology. 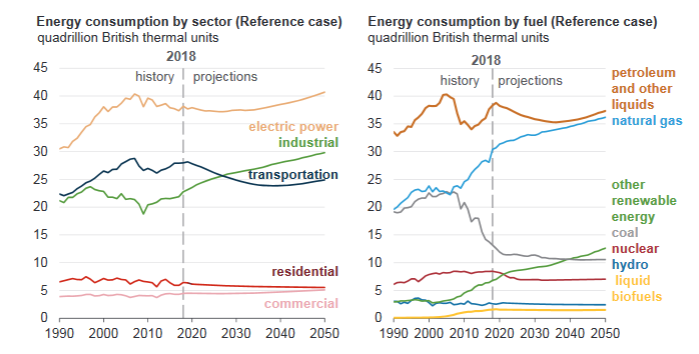 The report finds that non-hydroelectric renewables consumption grows the most on a percentage basis. The US Solar Investment Tax Credits is expected to be phased out after 2024, however the report shows that solar generation continues to grow due to an ongoing decline in solar costs (falling faster than other renewable sources) making them increasingly cost-competitive.

Residential solar photovoltaic (PV) capacity increases by around 8 per cent annually across the projection period, compared with the commercial sector’s 5 per cent average annual growth. Rising incomes, declining system costs, and social influences are expected to accelerate the uptake of residential PV.

Generation from both coal and nuclear is expected to decline: Coal from a 28 per cent share in 2018 to 17 per cent of total generation in 2050, while nuclear drops from a 19 per cent share today to 12 per cent in 2050. With this change to the fuel mix, carbon dioxide intensity is also expected to mirror this drop (Figure 3). 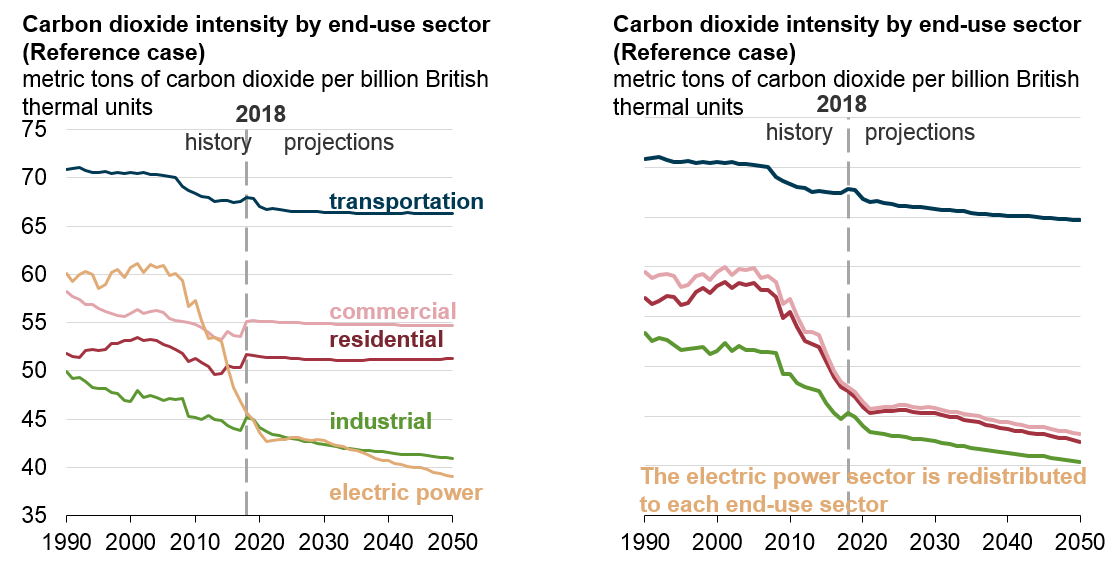 While the US remains a net exporter of coal through to 2050 (Figure 4), coal exports are expected to decrease due to other suppliers located geographically closer to major markets. 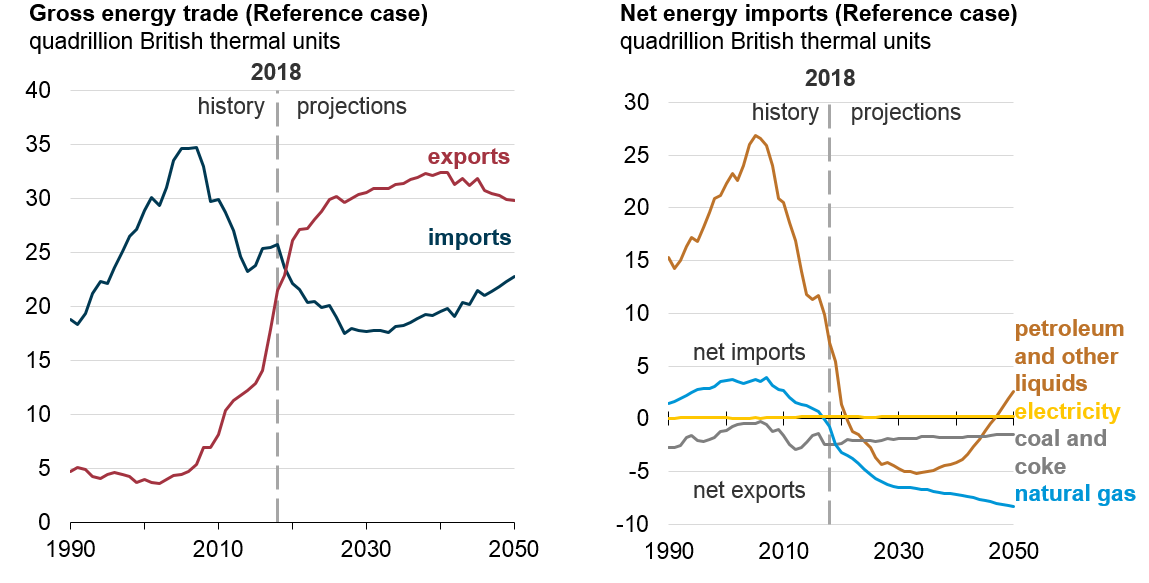 The US became a net natural gas exporter in 2017 and has continued to export more natural gas than it imports. Over the projection period this trend remains as liquefied natural gas becomes a significant export. 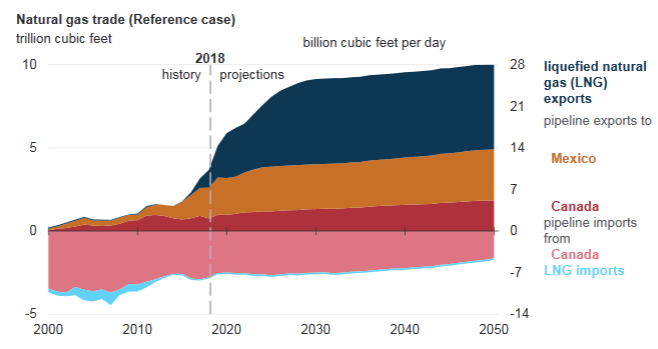 After 2020 production grows at a higher rate than consumption, leading to an equivalent growth in US exports of natural gas to global markets. Natural gas production in grows by 7 per cent annually from 2018 to 2020. However, after 2020, both domestic consumption and demand for US natural gas exports slows.

Relatively stable natural gas prices make US gas competitive in North American and global markets and LNG exports and pipeline exports to Canada and to Mexico remain steady through to 2050.