Competitive, transparent and dynamic markets ensure customers can access reliable and efficiently priced gas and electricity. Deregulation of retail electricity prices in South East Queensland (SEQ), which commenced on 1 July, along with a NSW Government proposal to deregulate retail gas prices from 1 July 2017 are encouraging moves that support effective competition in these markets. Effective competition can be inhibited by the threat of Government intervention. Meanwhile, the South Australian Government recently asked the state’s Essential Services Commission (ESCOSA) to review recent retail electricity price rises by major retailers. This is despite SA having introduced full retail contestability in 2003 and removing price regulation in 2013 and the Australian Energy Market Commission finding that SA has effective competition[i].

In other areas of energy policy, the Victorian and Queensland governments have set ambitious renewable energy targets over the next 15 years and elsewhere the construction of additional interconnectors continues to be considered by two states.  South Australia is proposing to spend $500,000 towards a feasibility study to explore options for greater energy interconnection with the Eastern states, while Warwick Smith has released a preliminary feasibility report regarding a second interconnector between Tasmania and Victoria. Below is a closer look at what’s been happening by jurisdiction.

The Victorian Government has set ambitious renewable energy targets. Twenty per cent of electricity generated in the state will come from renewable energy by 2020, rising to 40 per cent by 2025. The targets and a proposal (the details of which have yet to be released or consulted on) to meet them via an auction scheme form a part of Victoria’s Renewable Energy Action Plan which is expected to be released later this year[ii].

Figure 1: Wind capacity in the NEM and the expected additional wind capacity for a Victorian 2025 target (MW)[iii] 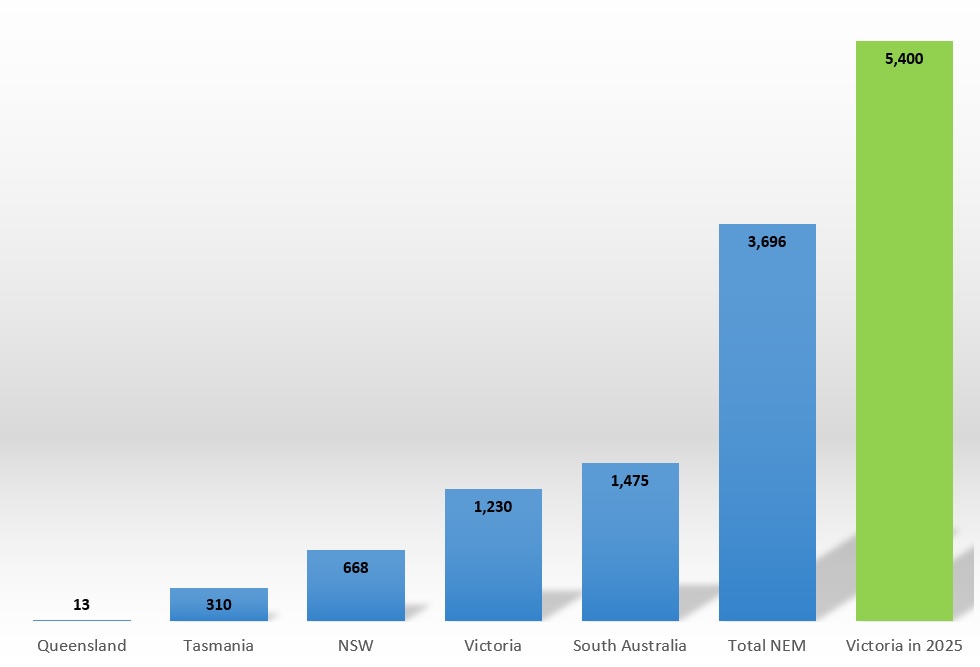 The network value of distributed generation inquiry stage 2 discussion paper was released last month[iv]. The paper is seeking feedback on both the framework itself, and a range of questions that the ESC need to be answered in order to:

In March 2016, the NSW Government released a package of legislative amendments, which was passed in Parliament. The amendments support a voluntary, market-led rollout of advanced meters in NSW. The amendments also include provisions to support the market transition to a competitive metering framework and support new national metering arrangements that are expected to come into effect on 1 December 2017. The NSW Department of Industry’s Code for the safe installation of direct-connected whole current electricity metering was also released this month[v].

The Independent Pricing and Regulatory Tribunal (IPART) last month released a Fact Sheet and Final Determination for the 2016 review of solar feed-in tariffs[vi]. The final decision is that the retailer contribution will be 6.1 cents per kilowatt hour from 1 July 2016 to 31 December 2016 paid to customers in the NSW Solar Bonus Scheme.  For customers who are not part of the NSW Solar Bonus Scheme, the solar feed-tariff benchmark will be 5.5 – 7.2 cents per kilowatt hour in 2016-17.

The NSW Government will deregulate retail gas prices from 1 July 2017 if certain conditions are met. The conditions include an increase in the level of competitive offers available to customers in regional NSW.

Deregulation of retail electricity prices in South East Queensland (SEQ) commenced on 1 July 2016. The Queensland Government has mechanisms in place to ensure vulnerable customers are protected in the deregulated electricity market, with the Queensland Competition Authority (QCA) expected to monitor the market to ensure it remains competitive. The QCA will produce an annual report so customers and stakeholders can track the progress of deregulation over time.

The Queensland Productivity Commission (QPC) undertook an inquiry into Solar Feed-in Pricing in Queensland[vii]. The QPC delivered the Final Report to the Queensland Government on 20 June 2016. The Treasurer must provide the QPC with a written response within six months of receiving it.

The government has convened a Renewable Energy Expert Panel that is investigating credible pathways to a 50 per cent renewable energy target by 2030. The study will focus on public consultation and broad community engagement with community meetings planned in regional areas across Queensland. The Issues Paper consultation closed on 10 June 2016. Consistent with its terms of reference, the Panel must publish a Final Report in November.

The renewable energy target is part of the Queensland Government’s Advancing Climate Action process. The government is considering a transition strategy for Queensland in light of the COP21 commitments made to reduce Australia’s emissions.

The Queensland Government is supporting up to 60 megawatts of solar generation to encourage large-scale solar generation projects and investment in Queensland. The so-called Solar 60 initiative is in collaboration with the Australian Renewable Energy Agency (ARENA).

The South Australian Government announced that it would seek advice from the Essential Services Commission of South Australia (ESCOSA) “as to whether recent electricity prices rises by major retailers in South Australia are justifiable”[viii] .

In addition, ESCOSA has started a review into regulation of retailer feed-in tariffs (R-Fit) and whether it is necessary and appropriate to set a R-FiT for 2017 (a regulated minimum R-FiT has been set in each calendar year since 2012).

The R-FiT is paid to solar PV customers when they export surplus electricity into the grid. The Commission is currently considering submissions in response to its issues paper and is expected to publish its draft report later this month.

On 14 June, the SA Government announced that $500,000 would be committed towards a feasibility study to explore the options for greater energy interconnection with the Eastern states. The State’s Treasurer, Tom Koutsantonis, said: “This study will look at how we can better connect with Eastern markets to gain greater access to baseload power and find new markets for the incredibly cheap renewable energy generated in South Australia”.

Any additional interconnection would be on top of the upgrade to the Heywood interconnector between South Australia and Victoria.

A feasibility study has commenced into a second Basslink interconnector and the State Government appointed a three person Energy Security Taskforce to undertake an independent energy risk assessment. This followed a period of very low hydro storage levels coinciding with a fault on the Basslink interconnector, which prevented energy imports to the state.

Immediate energy security has improved with rain throughout May and June across Tasmania leading to many smaller hydro storages filling and, in some cases, overflowing.  As at 13 June, overall storages had risen to over 27 per cent (up from a record low of 12.8 per cent at the end of April) while the Basslink interconnector returned to service in mid-June.  Figure 2 shows the increase in hydro generation and the use of the Basslink over the past month. 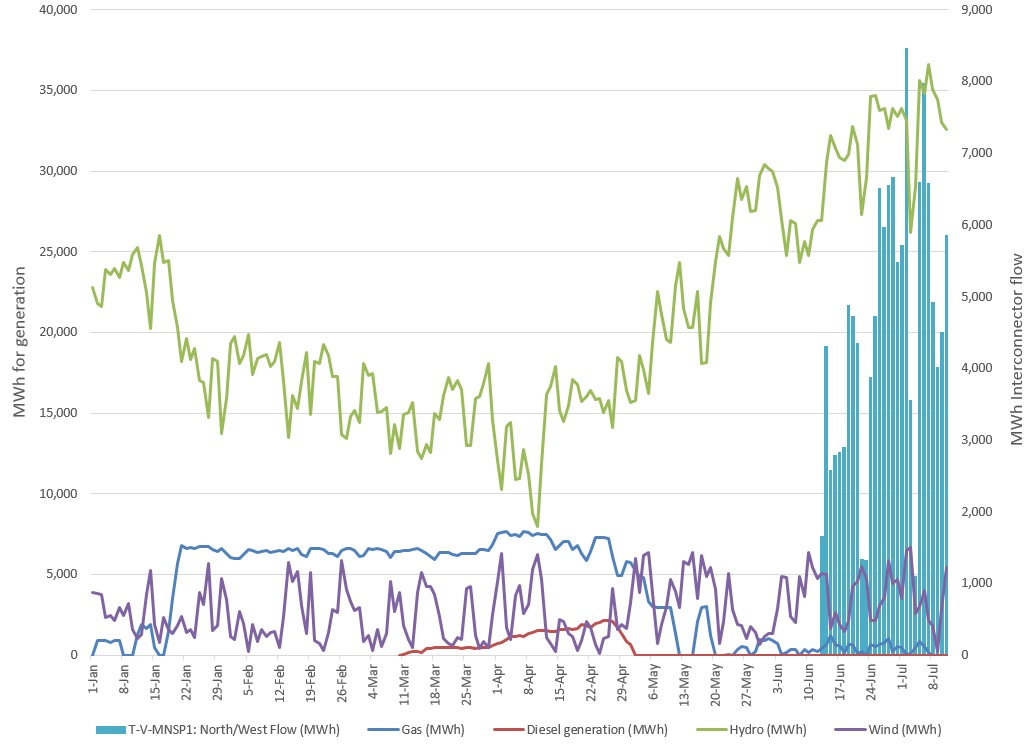 Following his appointment to lead a feasibility study into a second Basslink interconnector, Warwick Smith delivered a preliminary report to the Australian and Tasmanian governments on 21 June[x]. The preliminary report sets the context for the feasibility study, discusses a range of key issues and outlines what Mr Smith sees as the fundamental questions and considerations to be addressed over the next six months, as he develops his final advice. The final report is expected to be completed by year end to align with the work of the Tasmanian Energy Security Taskforce.

[x] The Hon Warwick Smith AM, 2016, “Feasibility of a second Tasmanian interconnector”, http://www.industry.gov.au/Energy/Documents/Preliminary-Report-Feasibility-of-a-second-Tasmanian-interconnector.pdf