Energy mix caught on the horns of a trilemma

As Australia’s electricity system transitions toward more renewable energy and lower emissions our infrastructure is facing pressures to adapt to new sources of electricity. Electricity has some physical characteristics which are normally supplied by large generators.

As the generation mix becomes more variable and distributed (think wind energy rising and falling minute by minute as the wind speed changes or generation spread across rooftops instead of at a centralised plant) we need to find solutions to maintain reliability and security of supply. The UK is facing similar challenges. In 2015, around 26 per cent of generation was generated by renewables[1] As Figure 1 and 2 below show, this reflects a trend of strong growth in renewable energy over recent years.

Figure 1: Changes in the power mix over the last 5 years 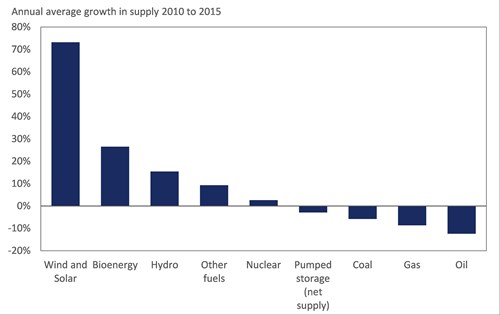 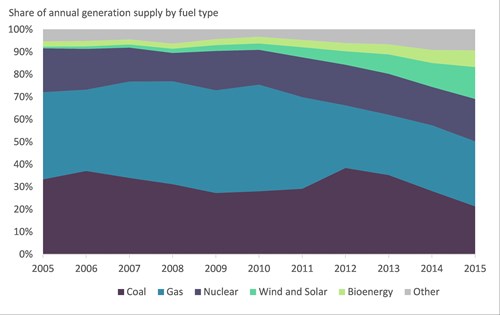 Policy is driving generation mix changes in the UK more than relative costs, with the Conservative government announcing late last year that it would phase out coal-fired power by 2025 This follows many years of policies designed to restrict and disincentivise coal power, including carbon pricing and the EU Large Combustion Plant Directive. The coal wind-up also bodes ill for carbon capture and storage (CCS) - while coal CCS plants would be eligible to run beyond 2025, there is now a short window for proving up the technology at commercial scale or retro-fitting to existing plant.

Meanwhile, renewables support continues. Denmark’s DONG Energy has reached financial close on what will be the world’s largest offshore windfarm[2]. Hornsea 1 will be built 120KM off the east coast of England and will have a capacity of 1,200MW, or almost three times the size of MacArthur, Australia’s largest wind farm. This deal was signed despite widespread dismay amongst UK renewable energy developers at the Government’s insistence that subsidies be cut back. The UK’s largest coal plant Drax (4,000MW – 50 per cent larger than Eraring in NSW), is part way through a plan to convert its boilers to run on biomass. Drax has converted two of the six units already[3], although further progress may be affected by the changes to renewable subsidies. This is not without controversy, as it benefits from the treatment of biomass as a renewable energy source, but its fuel comes from as far away as the US and Canada. From a system security perspective, it has the advantage over wind and solar of being dispatchable and synchronous.

This level of intervention in the market and the fact that gas fired generation– the largest power source -  is the only technology not specifically targeted for policy support, has stymied investment. As coal plant closures will occur over a period in which several of the UK’s aging nuclear fleet will also come to the end of their lives, this has raised concerns over whether the UK will have sufficient energy in the near to medium term. As figure 3 below shows, different types of plant have different characteristics, resulting in less of the fleet being able to contribute to frequency control, inertia and other tools used by system operators to maintain supply.

Figure 3: Types of power generation and their characteristics 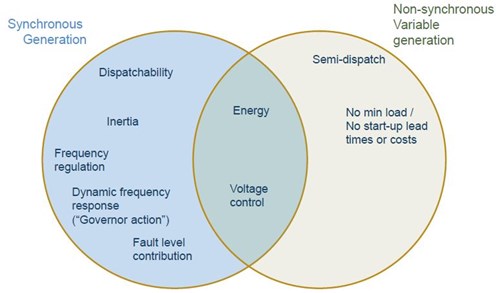 The UK has responded to these changes by introducing measures to keep the system stable and prevent black outs[4].

Three solutions to maintain grid stability have been implemented:

The Government will buy more electricity capacity and bring forward the offers to an earlier date. This is designed to encourage investment, in particular in new gas fired power stations[5]. The capacity will be procured through an annual auction and volume will be determined by the National Grid.

The UK government has attempted to bring new nuclear power capacity on via a generous contract for difference, valuing the new nuclear energy at UKP92.50/MWh (A$170 at current exchange rates). Even so, the chosen supplier, France’s EDF has had to turn to the French state for financial support to build the first new plant, Hinkley Point C.

Coal fired generators were added to the list eligible capacity providers to assist the stability of the network. Eggborough in Yorkshire was mothballed rather than closed down entirely after securing capacity payments from National Grid to remain available as emergency back-up[8]. National Grid also provided a contract to Fiddlers Ferry power station to provide ancillary services to remain operational.

The challenge the UK government faces is managing the costs of this transition. UK consumers are paying higher bills to cover the costs of the renewables support programs, as well as a carbon price. To this will be added the costs of the capacity auction payments, the nuclear support and additional ancillary services cost. The government is at least realistic about this. As the energy Minister Amber Rudd said “We must be frank about it: there is a bit of a cost. We’re not going to be able to have renewable energy cheaper than coal and gas[9].”

The increased cost of energy has resulted in political pressure on energy retailers (to be discussed in a future Energy Insider) and was cited as a contributing factor [10] to the announced closure of the UK’s largest steelworks. It seems the UK is, finding it just as challenging as Australia to navigate its way through the energy trilemma – reliability, sustainability and affordability.

May 13 2021
Read Analysis
GET IN TOUCH
Do you have a question or comment for AEC?