(Energy in a time of COVID-19) Do we need a reliability hair trigger?

On Friday 20 March the COAG Energy Council met and considered reliability and security in the National Electricity Market (NEM). Were its conclusions well-founded, or did the teleconference result in it being divorced from the realities of the energy market and the consumers who are at its mercy? We take a look.

The 22nd Energy Council meeting, held on 22 November 2019, was a straightforward affair, with the Energy Security Board (ESB) being asked to investigate reliability and security, and the Australian Energy Market Commission’s (AEMC), Coordination of Generation and Transmission Investment (COGATI) review. In addition, the ESB was asked to look at short-term actions to progress Renewable Energy Zones (REZs), and actions to progress the Integrated System Plan (ISP).

Four months later and the world has changed significantly, with COVID-19 causing global havoc, and certain to send Australia into a recession. The last time Australia faced such challenging economic conditions was 2009, as a result of the Global Financial Crisis, and economists are unanimous that the impact of this downturn will be more severe[i].

The following graph shows how demand changed at that time as a result of the downturn, and how future projections needed to be repeatedly corrected for a structural shift in electricity demand as a result of changes in economic activity, and altered electricity consumption patterns as a consequence of changes in rooftop solar photovoltaic penetration, energy efficiency improvements and industrial load closures. 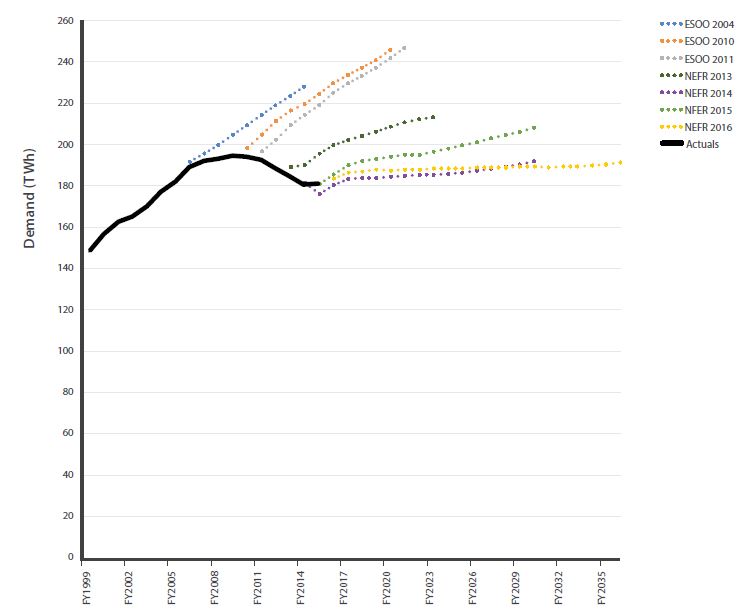 The current forecast economic conditions, which prompted the Reserve Bank of Australia out of session to reduce the cash rate target by 0.25 per cent, and the Commonwealth and State Governments to introduce a number of economic response packages, are likely to cause significant economic challenges, and ultimately reduced demand in the energy industry.

The expected reduced demand is likely to change the supply-demand balance, and a material oversupply is likely to emerge. Judging from previous economic downturns, a fall in demand trajectory is to be expected for years to come.

In addition, the current Medium Term Projected Assessment of System Adequacy (MTPASA) shows no unserved energy for the next two years,[iii] and the most recent Electricity Statement of Opportunities reported unserved energy below the existing reliability standard until 2028-29 in New South Wales, as shown in the following graph: 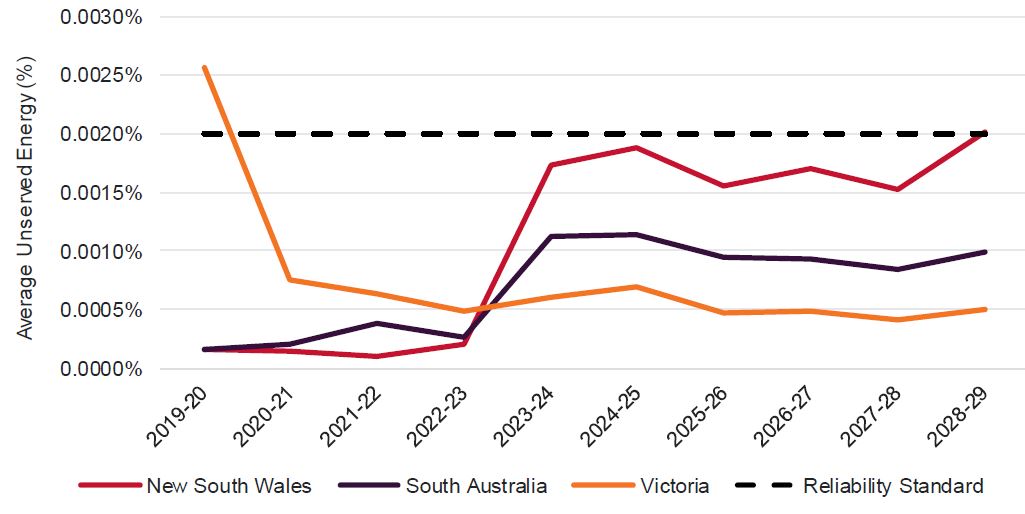 It is in this context that the COAG Energy Council endorsed:[v]

An “out-of-market capacity reserve” appears to be a re-emergence of the “Enhanced RERT” increased contracting duration that was rejected by the AEMC in 2019. [vi]

What does a 0.0006 per cent reliability standard mean?

At face value a tighter reliability standard will require more generation and/or demand response available to reduce the duration of wholesale outages from 10½ minutes per year to just over 3 minutes per year. This is in a context where customers suffer outages from other causes averaging around 100 minutes per year. The question becomes whether the additional cost of employing the additional generation and/or demand response to achieve the additional 7 minutes of supply is palatable for customers. Recent analysis by the Australian Energy Regulator (AER) to determine the Value of Customer Reliability (and reported in this Energy Insider article) would suggest not.

The 0.002 per cent reliability standard had historically been promulgated by the Reliability Panel, a technical group comprising a broad collection of industry stakeholders charged with both setting this target and other market settings, such as the price cap. Their broad role ensured they could provide consistency across all the settings, thus encouraging the market to deliver the standard, which as shown by the figure above, it had been. The imposition of a tighter standard will be out of step with market settings, and is presumably the reason the 0.0006 per cent is being applied to some aspects of the reliability arrangements but not the market itself.

Before the COVID-19 crisis there was no indication of a looming generation shortfall, nor were there any signals from consumers that additional reliability was more highly valued than it had been historically when the original reliability standard was introduced. Since the COVID-19 crisis there are stronger indications that demand will be reduced, therefore supply will continue to be in surplus, and decisions to tighten the reliability standard and impose additional costs on consumers seem inopportune, and at odds with good planning practices.

The process that led to these confusing new arrangements stepped outside existing industry governance, occurred without consultation, and appears driven more by a desire to appease over-blown political fears rather than the true interests of consumers.

[ii] Finkel, et al., Independent Review into the Future Security of the National Electricity Market: Blueprint for the Future, June 2017