When the market operator released its gas outlook for eastern and south-eastern Australia this week a lot of media focus was on the potential for a “gas squeeze”.  It followed the Australian Competition and Consumer Commission (ACCC) also sounding a supply alarm at a gas industry conference a week earlier.

But the latest Gas Statement of Opportunities (GSOO) also highlights the potential for electrification to impact gas consumption into the future. The GSOO forecasts falls in domestic gas consumption as consumers – residential, commercial and industrial - switch from gas to electricity or zero-emission fuels.  It also points to the continuing important firming role for gas generation in the National Electricity Market (NEM), but flags a likely change in the peak demand periods where gas generation will be called on to meet demand and ensure system security and stability.  Below we take a closer look at AEMO’s latest assessment.

A net zero emissions by 2050 goal is now shared across major political parties and will drive economy-wide changes, including the substitution of natural gas. The speed and degree of change for the gas sector will be driven by technology developments, government policies, changes in the grid, as well as decisions by industrial, commercial and household users.

AEMO’s scenarios in its GSOO include step change, progressive change, strong electrification and hydrogen superpower. It also considers a low gas price scenario. For domestic consumption (ie LNG exports excluded) and excluding gas-powered generation (GPG), step change would see a rapid shift toward net zero emissions with significant electrification with consumers moving from gas to electricity, and could see substituting gas with hydrogen or other zero or low-carbon alternatives to gas, such as biogas or biomass. Progressive change involves slower action initially but with stronger transformation later, while hydrogen superpower under which Australia becomes a major exporter of hydrogen and uses hydrogen domestically to offset gas consumption and less focus on electrification.

In some scenarios, falling gas consumption in some applications may be offset by an increase in gas used for example in steam methane reforming (SMR) hydrogen production to meet domestic hydrogen demand. Residential and commercial consumption is anticipated to fall under all scenarios (except low gas price) as consumers move to lower or zero emission alternatives, such as electricity and hydrogen. Strong electrification exhibits the greatest reduction in gas consumption, while under low gas prices it is expected to increase slightly.

The reduction in total domestic gas consumption under three of the scenarios is shown in table 1 below. Note how gas demand for steam methane reforming (SMR) to make hydrogen increases while domestic demand falls. 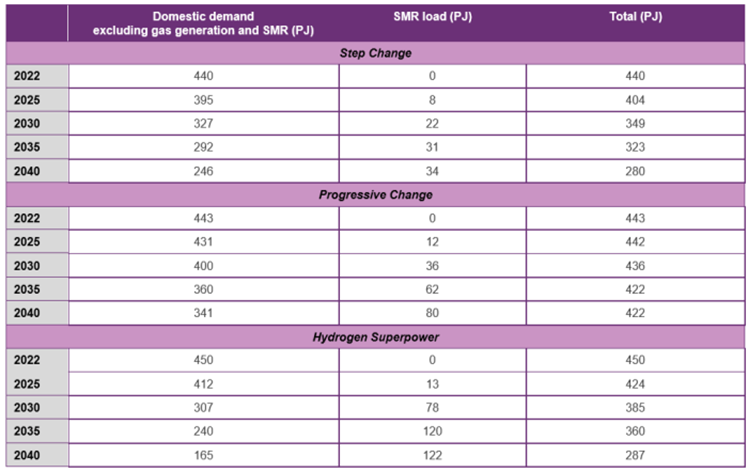 Electrification is expected to occur across the residential, commercial and industrial sectors and the extent to which it is will reduce gas consumption in the scenarios considered is shown below.

Source: GSOO 2022. Note: UAFG means “unaccounted for gas”. It is gas lost in the network and not delivered to consumers.

Electrification is expected to drive a reduction in the number of households and commercial businesses connected to gas under all scenarios (except low gas price).  Under step change connections would fall by 2.8 million in 2022 to just 1.6 million connections in 2041, while progressive change would lead to 2.9 million connections in 2041 (down from 4.8 million). The latest assessment is 4.5 million and 3.3 million lower respectively than under last year’s GSOO central scenario.  AEMO notes that it's still unclear if greater electric appliance use will result in physical disconnections from the gas network and whether new households will elect not to connect to gas. Its forecast represents the equivalent connection forecast if electrification disconnected consumers from the gas network, but they might not fall as steeply if expected electrification led to a reduction in gas use but with consumers keeping gas connections.

Residential and commercial users of gas consume relatively small volumes – estimated to be less than 10TJ each year. Consumption is based on a per connection basis and changes to gas connection forecasts with adjustments made for fuel switching (to electricity and hydrogen), energy efficiency savings, climate change impacts and responses to retail prices for gas.

Governments are already pushing to increase electrification and support improved appliance energy efficiency. For example, Victoria’s Gas Substitution Roadmap has identified both electrification and energy efficiency as important ways to reduce emissions in the short term, while the ACT’s climate change strategy includes removing mandatory gas connections to new residential areas. Still, the market operator is not clear on the speed and degree to which households and businesses will switch from gas to electricity.

Equally, the speed and ability of hydrogen to be deployed still rests on technology improvement and consumer uptake. Its impact on gas demand will be driven by how the hydrogen is produced. SMR uses natural gas, so the extent to which this is employed compared to hydrogen produced from other sources such as renewables (green hydrogen) will change the outlook for gas and may not be fully known for some time.

But the increased interest in and focus on developing hydrogen could see users switching from gas to hydrogen fuels, or hydrogen blended into the gas network. The deployment of other zero or low-carbon alternatives to natural gas, such as biogas or biomass, could also have an impact.

Industrial processes often require high temperatures which limits the extent that electrification can be used, although there is some work underway to develop high temperature furnaces for some processes like cement production.  In contrast, gas is easily combusted on site to provide the necessary high temperatures. Hydrogen or biomethane may offer an alternative zero emissions option to gas. Biomethane is a direct alternative but may be limited in how much gas it can replace by scale at which it can be produced. The cost of production for any gas alternative will also play a part in determining how broadly and quickly it is adopted.

Under its step change scenario, the market operator expects consumption to fall in the short term before plateauing at around 230PJ from 2027 onwards, but it expects hydrogen to reduce gas demand by 20PJ by 2039.  Electrification is expected to reduce gas consumption by 30PJ at the end of the 20-year forecast period. The progressive change scenario would see consumption remain at around 250PJ in the near term and then increasing from 2029 and peaking in the last year of the projected period. This increase stems from an expected growth in gas used to produce SMR hydrogen.

Gas generation will continue to play an important role in the grid and particularly its role in meeting sudden demand changes and providing critical system services to support grid security and stability. As renewables increase in the grid, gas generation along with storage will be increasingly important.

Gas generation will play an important role in ensuring system security it is able to adjust to sudden changes in the supply demand balance, helping manage extended periods of low renewable generation, helping meet the NEM’s energy needs if coal generation and other dispatchable sources are unavailable, and providing critical power system services to maintain grid security and stability.

The market operator expects that the annual volumes of gas used in generation will continue to decline until the mid-2020s then flatten out and potentially increase, reflecting its increasing role in meeting demand needs when other generation is not available.  Actual consumption could vary widely from the forecast simply because of its role to respond to changes in alternative supply.

Peak gas generation demand is projected to become “peakier”.  In particular, winter peak day gas generation are expected to increase with an “increasingly ‘peaky’ profile”. Less sunlight and early sunsets, as well as the potential impact of periods of low wind generation means reliance on gas generation to provide firming support is expected to grow, particularly as coal plants retire. Summer has traditionally experienced the highest peak demand periods, but the magnitude of peaks in the colder months are forecast to grow and as a result of greater electrification, gas generation is likely to become winter peaking.

Increasing volatility is forecast to result in the total monthly gas consumption occurring on only a few days in the colder months; it will also see the need for increasingly flexible solutions, such as localised gas storage and dual-fuel capacity for new gas generators. The increased maximum winter demand is shown in figure 2 where the winter max day forecast is expected to double by 2041 under the step change scenario.

AEMO’s forecast for its step change scenario would see a short-term increase in gas generation than previously forecast based largely on increased electrification and the potential for unexpected NEM events, such as plant outages[i], and weather variability. As coal plants exit the market, gas plants are forecast to start more frequently and operate for longer periods given their firming role in the grid. In the longer term (from 2038) there is an expectation that longer duration storage will reduce the need for gas generation to run for extended periods, although they will continue to be needed in challenging weather conditions or when other plant is not available.

On peak days high gas consumption events are expected to remain significant and with a shift to winter peaks there will be the added challenge of tighter supply/demand with winter traditionally being the highest demand period for gas.

[i] The GSOO notes that in 2021 unexpected outages at plants in Victoria and Queensland led to increased gas demand of 21PJ between June and December 2021.