Last week the Federal Chamber of Automotive Industries[i] reported that electric vehicles (EV) and hybrid vehicle annual sales in Australia are on track this year to fall for the first time.  Although the sales figures do not include Tesla vehicles, the figures highlight the need for more incentives to purchase EVs in Australia, and the impact of the decline in petrol prices, which could be moving customers away from EVs.

A recent report by Beyond Zero Emissions[ii] argues that a shift to 100 per cent EVs in Australia is both feasible and affordable. Their analysis, however, makes some optimistic assumptions that battery technology progresses at a more rapid rate, maintenance costs for EVs are at the lower end of the spectrum and petrol prices are high.

What is leading to the decline in Australia?

According to automotive industry figures, all-electric Nissan Leaf and hybrid Toyota Prius sales have decreased with 10,679 electric and hybrid cars sold in the first 10 months of 2016, down from 13,271 sold in 2015[iii]. If the rate of sales continues over the final weeks of 2016, the total sales nationwide will be about 3.4 per cent lower than in 2015[iv].

Tesla refuses to release sales figures, but if Australia is following other countries it may be partially filling the sales gap. The US market is seeing a continued increase in sales by Tesla. Tesla has increased its 2016 sales in the US partly due to the new Tesla Model X, while sales of the former best seller the Toyota Prius has declined. Figure 1 and 2 shows the sales of the Tesla and Prius in the US from 2010 to 2016. 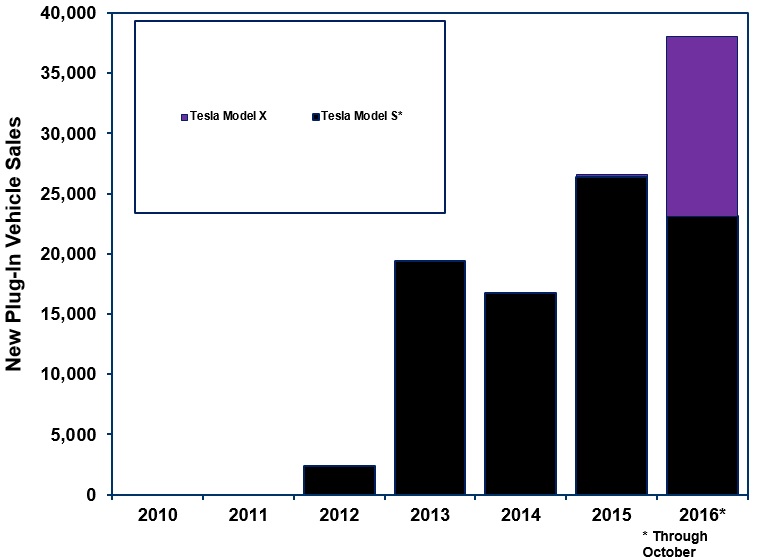 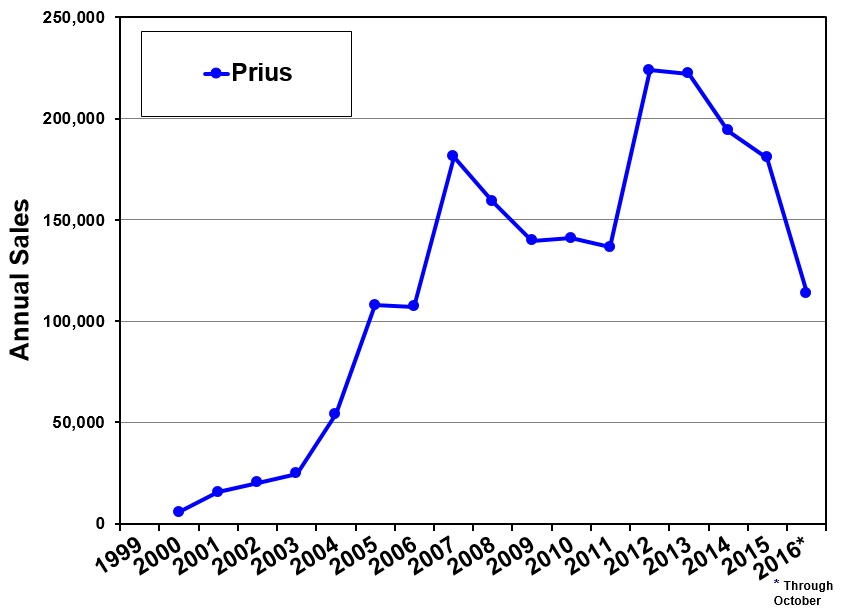 The lack of incentives to purchase EVs in Australia mean that the price premium remains high. The countries with the two highest market shares, Netherlands and Norway, have implemented a range of incentives benefiting consumers that opt for EVs. In the Netherlands, EVs receive a significant reduction on registration and circulation taxes, while Norway provides strong incentives in the form of registration, tax reductions and, for BEVs, the exemption from value-added tax (VAT), waivers on road tolls and ferries, and access to bus lanes.

In Australia, the ACT is offering luxury vehicles tax breaks and stamp duty exemptions to encourage the take-up of EV’s, while the Greens recently proposed a range of policies to increase the adoption of EVs, including five-years free registration, more public charging infrastructure, incentives for big fleets to buy EVs, and part-funding of a domestic EV industry[v]. The Greens expect these policies will get 31,000 more EVs on the road by 2021, and 330 more charging stations[vi]. The Greens polices however might be difficult to implement. If these policies were to be implemented, the free registration plan, which would also cover compulsory third-party insurance, which would require an agreement from state governments that administer car registration schemes.

Another factor that could be leading to the slowing in sales for EVs is the lower petrol price in recent times. Figure 3 shows the impact of low petrol prices in the US on hybrid vehicles, while in Australia petrol prices have been declining since 2013, albeit to a lesser extent. 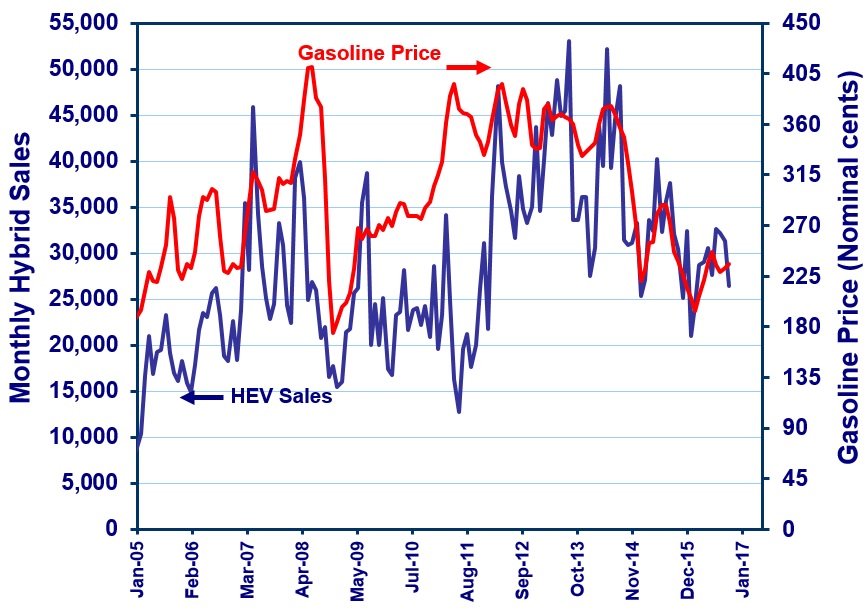 Unless there are more incentives in Australia and while petrol prices continue to remain low, customers are unlikely to be encouraged to purchase EVs in the current environment. Table 2 and 3 below show the cost of EVs in comparison to vehicles running on petrol. Customers are generally able to purchase a luxury car running on petrol in comparison to a standard EV for about the same price.

Table 2: Price and range of EVs in Australia

Table 3: Price of a sample of motor vehicles running on petrol 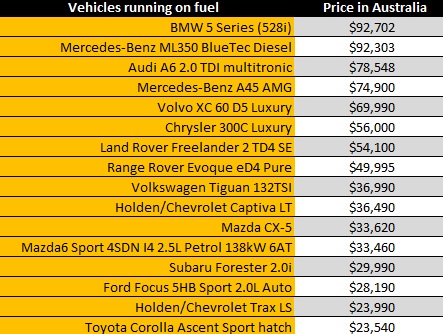 What does the future hold for electric vehicles?

Bloomberg New Energy Finance’s has forecast a boom in EV sales around the world and as them displacing about 8 million barrels a day of oil demand by 2035[vii]. This comes at a time when four of the world’s biggest cities, Paris, Madrid, Athens and Mexico City are to ban diesel vehicles from their city centres within the next decade to tackle air pollution. The city authorities will subsequently work with national governments and manufacturers to promote EVs and cleaner transport[viii].

In Australia, Beyond Zero Emissions recent report on Zero Carbon Australia Electric Vehicles claims that a shift to 100 per cent EVs in Australia is both feasible and affordable[ix]. The analysis highlights that urban travel is well suited to EVs, and argues that polices which make it more convenient for Australians to use non-car transport modes, such as public transport and walking and car-share schemes will allow more Australians to avoid the costs of individual car ownership. This in turn would reduce the costs of a shift to 100 per cent EVs[x] and reduce the number of vehicles on the road that would need to be replaced with EVs.

Despite the encouraging projections for Australian EV sales the Beyond Zero Emissions report does make a number of optimistic assumptions, which include that car and battery technology progress at a more rapid rate, maintenance costs for EVs are at the lower end and that petrol prices move towards the higher end of projections.

[i] The Australian, 2016, “Electric and hybrid vehicle sales stuck in a pothole”, http://www.theaustralian.com.au/business/electric-and-hybrid-vehicle-sales-stuck-in-a-pothole/news-story/53bc81fa1bbd253a34eb0477323b4843

[vii] The Guardian, 2016, “Four of world's biggest cities to ban diesel cars from their centres”, https://www.theguardian.com/environment/2016/dec/02/four-of-worlds-biggest-cities-to-ban-diesel-cars-from-their-centres

[viii] Bloomberg, 2016, “Electric Cars May Take an OPEC-Sized Bite from Oil Use”, https://www.bloomberg.com/news/articles/2016-12-03/electric-cars-could-take-an-opec-sized-bite-from-oil-demand