On 17 July the Australian Energy Market Operator (AEMO) released its Integrated System Plan (ISP) and soon after EnergyInsider had a look at transmission planning principles (Building Transmission In A Market). Now we get into the detail of the 100-page report and decipher what it tells us.

Recommendation 5.1 of the Finkel Review[i] was for AEMO to prepare an ISP “to facilitate the efficient development and connection of renewable energy zones across the National Electricity Market”. The ISP effectively replaces the National Transmission Network Development Plan (NTNDP) which performed a similar, “independent, strategic view of the efficient development of the NEM transmission grid over a 20-year planning horizon”.[ii]  Unlike the restricted focus of state-based transmission planners, the ISP (as the NTNDP did before it) seeks to assess the NEM’s needs holistically.

The neutral case reports that dispatchable capacity will remain fairly constant at about 40GW, with much of the retiring black and brown coal plant capacity taken up by storage increasing to 17GW (90GWh). Wind capacity will increase by about 10.5GW, while the major growth will be from 28GW of utility scale solar, as shown in figure 2. 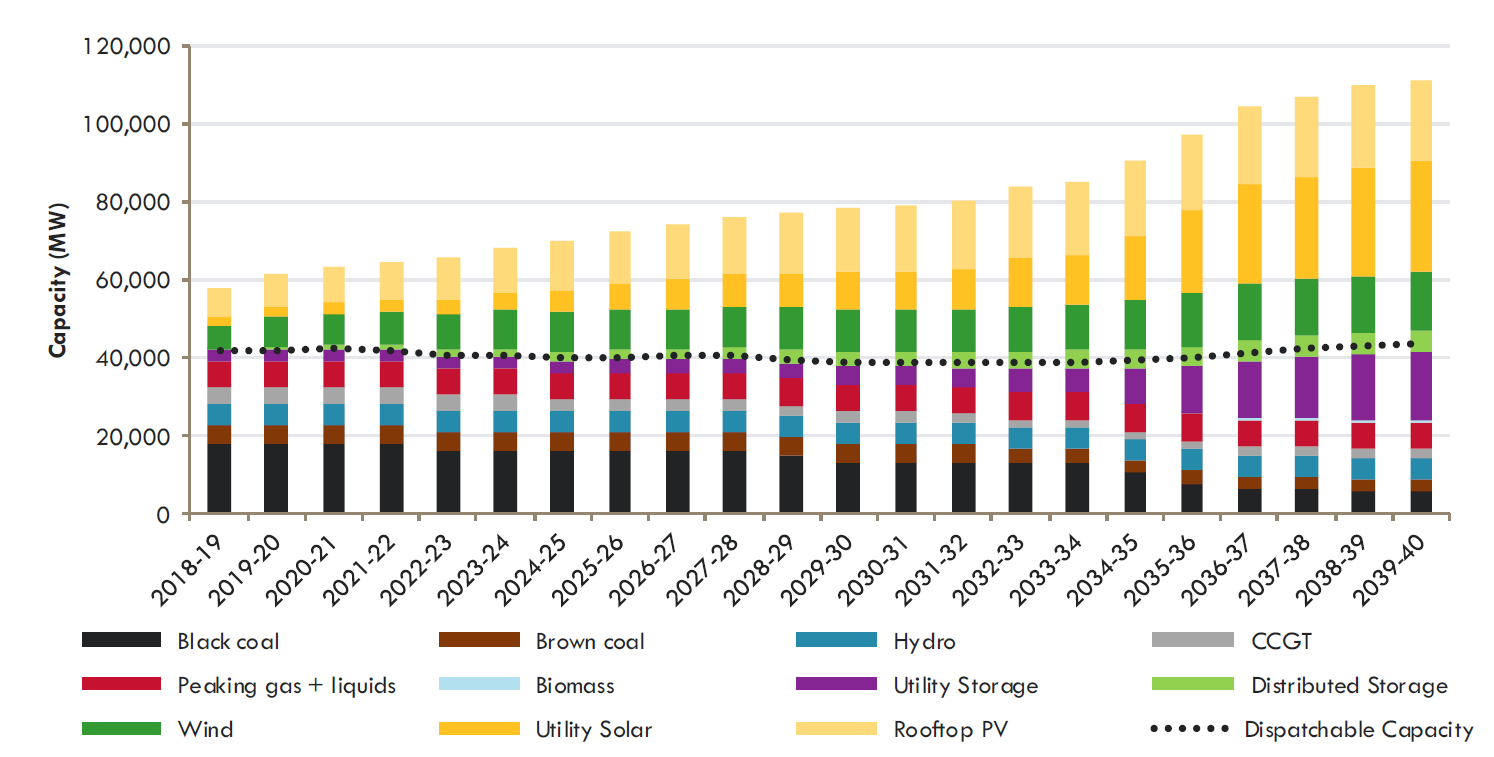 AEMO correctly identifies that the forecast levels of renewable energy generation will reach a point at which their output will be excess to the system’s requirements. Such over-supply of generation may be best utilised in replenishing utility-scale storage, or being used for industries which can handle excess, cheap power, such as renewable hydrogen (a subject for a later EnergyInsider piece). 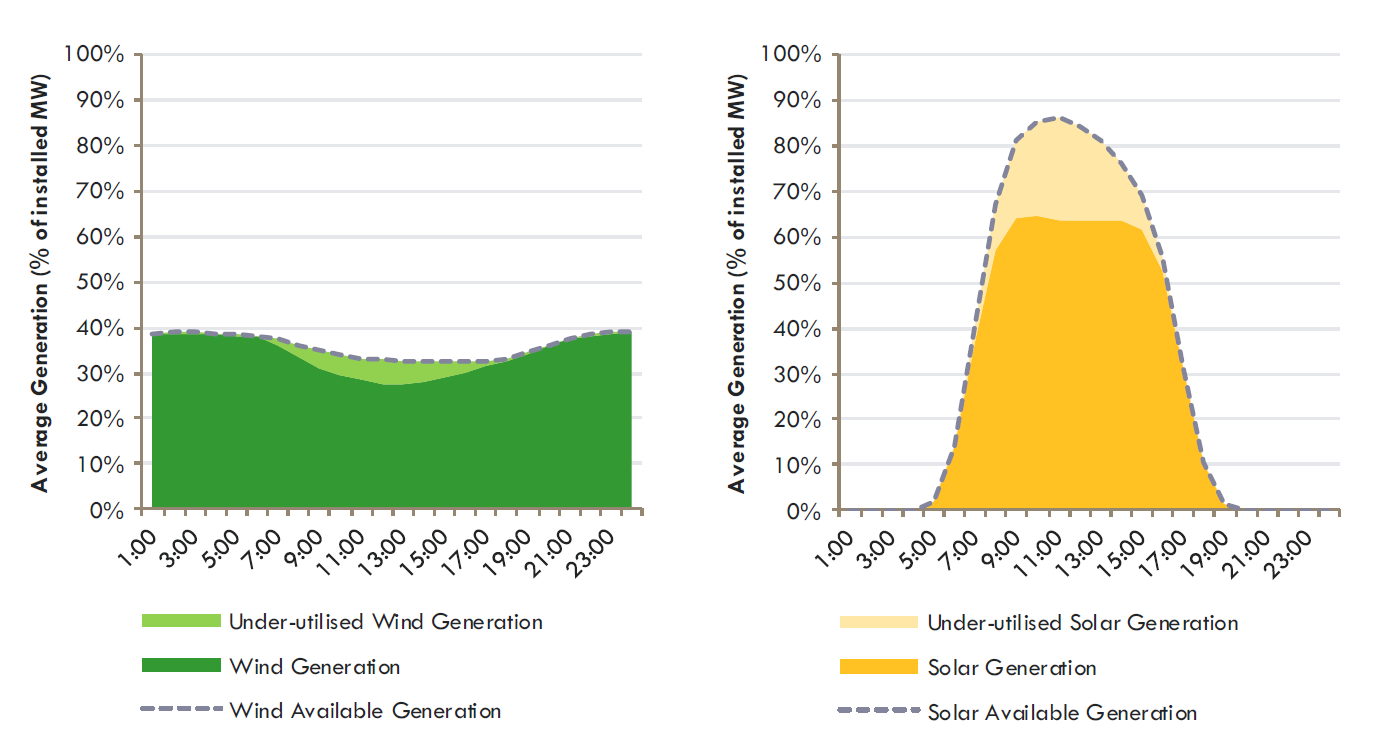 The Finkel Review mooted the idea of “renewable energy zones”, which could be supported by governments if the market was unable to deliver the necessary investment.[iii] AEMO identified 34 possible zones, as shown on the following figure. It concluded that: 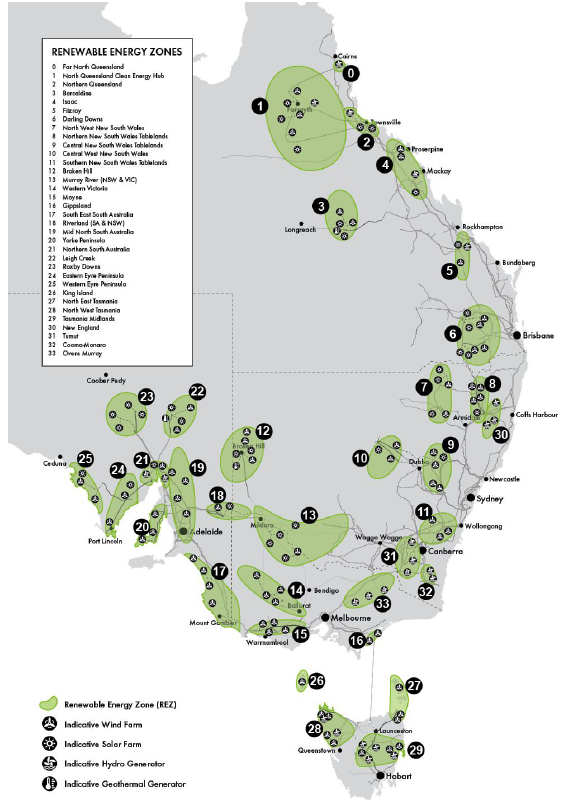 After taking the assumptions and conducting generation and economic modelling, AEMO has produced a 20-year development plan which is separated into three “groups”, as follows: 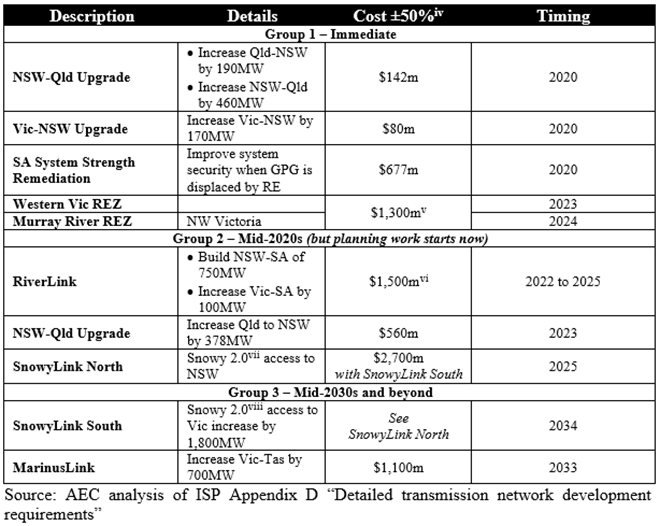 In total the projects add up to about $8 billion, with a 50 per cent margin of error. In addition there are a number of possible conditional network augmentations for implementation in the period 2031 to 2040 which are dependent upon renewable energy development.

AEMO conducted an economic assessment to determine the market benefits from the Base Development Plan (which includes everything except MarinusLink). There were four categories for benefits, being:

The annual benefits were then netted against generation and transmission investments converted to annual cash flow equivalents, and the derived values discounted to determine a net present value.

AEMO deduced that the Base Development Plan (comprising $7 billion of transmission network investments) would return net benefits of $1.2 billion.[ix]

AEMO’s work is helpful in addressing the technical challenges of catering for a power system in transition, however while adding and upgrading transmission infrastructure is one means by which reliability and security can be maintained to meet the required standards, it is not the only answer, with market-based solutions a viable alternative.

Most of the cost estimates in the ISP have a 50 per cent uncertainty associated with them and along with the significant uncertainty of modelling the NEM out to 2040, readers should ascribe very low confidence to the reported benefits.  Irrespective of whether the benefits are credible or not, it is misleading to report aggregated benefits.  While there are interdependencies and commonalities, it is important that each individual project is assessed on its own merits, and neither receives a cross subsidy from other projects, nor provides one.

It is also important to consider the National Electricity Objective, which sets out the need for investments in and the operation of the NEM to be efficient and in the long-term interests of electricity consumers.  The Energy Council would argue that the market should identify power system shortcomings and opportunities, and respond in the most efficient manner, whether that be via generation assets, network augmentation or interconnection.  While the ISP can point to apparent opportunities for needs to be addressed, it should not be taken as a blessing for transmission solutions to be implemented untested, at the cost of efficient market development.

[i] Finkel et al., Independent Review into the Future Security of the National Electricity Market: Blueprint for the Future, 2017

[v] Unable to be separated from the detail in the ISP.  May also include a contribution towards the Moyne and Riverland REZs