Coordinating Electricity Market Reform: The argument for a framework

When we talk about problems faced by the energy sector, focus is generally on the failure of government policy and the decade-old vacuum this lack of direction has left the industry to manage against a backdrop of political pressure over prices and supply.

In 2018 the AEC commissioned KPMG to review market design principles as the first stage in a process to improve the regulation of the National Energy Market (NEM). This second stage develops an effective framework of how measures from the NEM’s regulatory bodies and governments interact. The objective is to be able to effectively assess and implement rule changes and wholesale market reforms in a way that avoids unintended consequences and costly overlaps that are ultimately borne by consumers.

KPMG’s suggested framework to assess the congruency of wholesale market reforms (see panel below) has been released today. Coordinating Electricity Market Reform is an industry supported response to the current tangle of reforms and rule changes and the increased spread of responsibilities for change. 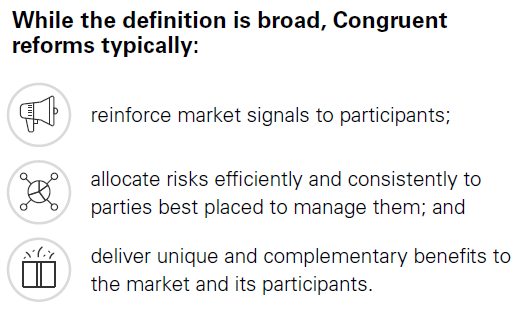 Off the back of the Finkel Review, the ESB was created. This has a new power such that rule changes can be implemented around the AEMC’s statutory rule making process (the body actually responsible for rule changes). The AEMC, ESB, AEMO and the AER are all playing more active roles in the arm wrestle over reform processes, and governments, both federal and state, have intervened in ways that ultimately impact the functioning of the NEM.

At the same time, the industry is faced with two separate and wide-ranging reviews into the NEM that will have long-term effects on its design. They are:

So KPMG’s work is timely. KPMG’s brief was to take their 2018 market design principles (see below) and develop a framework that will allow stakeholders to navigate through the regulatory thicket created by rapidly evolving market conditions. 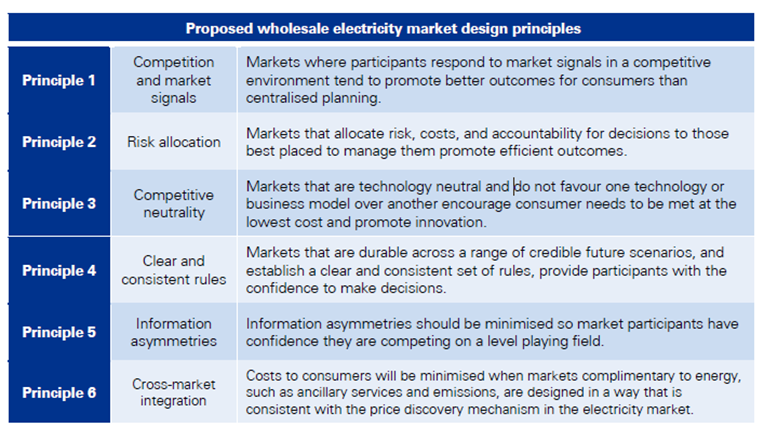 As mentioned above, the Finkel Review widened the spread of responsibility as multiple agencies compete in implementing the Finkel recommendations, resulting in serious questions about the ongoing governance of energy market reform.  The imperative now is to deliver a framework that highlights the importance of congruent policy and regulation that also recognises the impact wholesale electricity rules have on the efficiency of the electricity sector.

This is even more important now given the work being done in the two wide-ranging reform projects currently underway – the COGATI review and the NEM2025 process.

KPMG’s review acknowledges the complexity of considering congruency issues in reforming the NEM and the value in determining what are internal to its operation compared to those that are external. 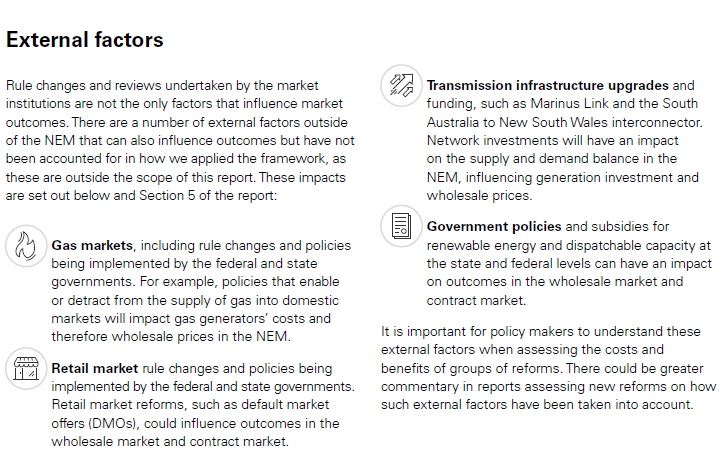 KPMG have developed a framework and tool to assist energy policy decision-makers and those advocating change to understand how well their proposals might fit within, or are congruent with the other market-wide reviews currently underway.  This could work either as a way of assessing congruency of rule changes as part of a reform process or as part of an assessment process itself.

In its analysis, KPMG has looked at 23 reforms and found that 26 per cent of the assessed reform pairs overlapped (see table 2 below) and of those 12 raised questions regarding congruency, while 16 had a positive overlap.

Table 2: Interactions between reforms assessed in this report 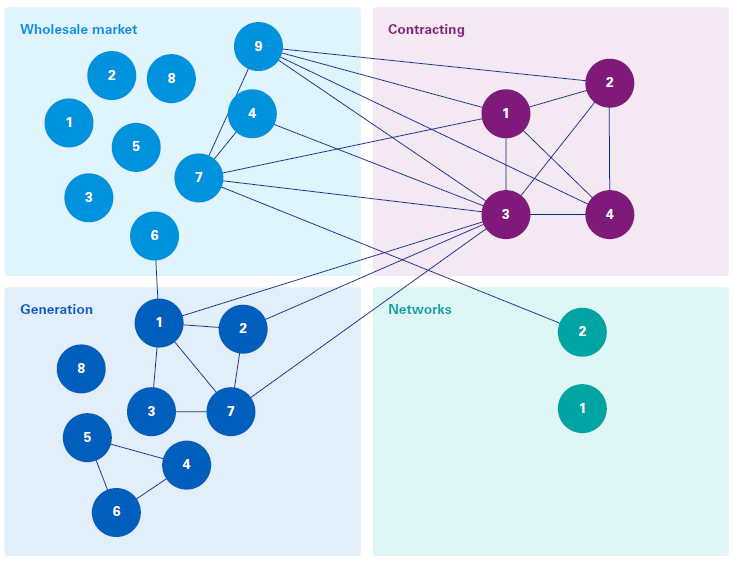 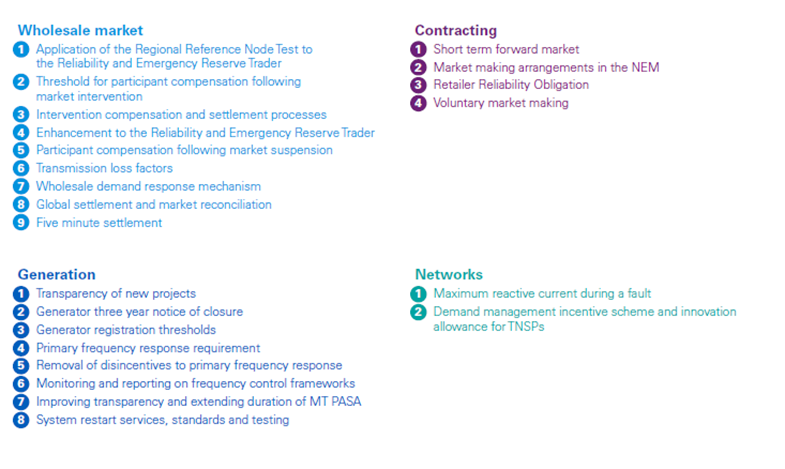 The work also flags potential issues with the major industry projects underway or likely to start in five minute settlements and a demand-response mechanism and notes that given the cost to implement will ultimately be borne by consumers, there is a need to carefully consider all the impacts.

The framework itself does not attempt to evaluate whether an individual reform has merit, but rather how reforms work alongside other reforms being put forward. It is designed to raise questions about how reforms will actually work together.

In doing so it helps to better understand the complexity of the energy reform landscape. It will be a valuable tool not just with the existing plethora of reforms but also will be able to be used to assess future reforms.

The framework aims to demonstrate the need to coordinate and align reforms as a whole rather than progressing reforms discretely.  It prompts thorough analysis on the interactions and knock-on effects of each change to the market.

It is anticipated that the framework can be used in various scenarios by decision makers or proponents of reforms or rule changes to provide a guide on how to think about interactions between rule changes, as well as a step-by-step tool on important questions that should be asked during the evaluation process.

The framework has three key steps – classification, assessment and analysis.

Overview of the coordination framework approach

Each rule and reform is first categorised into mutually exclusive categories based on its outcomes and objectives. Individual pairs of reforms within each category are then assessed to understand their congruency, how they overlap and how they work together. Finally, the combined assessments in each category are analysed to assess outcomes and identify questions around congruency and governance.

The KPMG report backs what the AEC and its members has been saying publicly for some time – well developed and coordinated policy reforms delivers market efficiency, investor certainty and long-term benefits for all customers.

KPMG have found that its framework highlights several key factors to be considered.  They are:

Another observation when reading the report is to reflect upon the sheer volume of regulatory reforms being considered, requiring the engagement of the industry in considering the merits and in complying with the changes in business practice that they impose. Whilst an increased level of regulatory change is inevitable at a time of industry transition, it must be recognised that it creates its own risks and costs, ultimately borne by consumers. This should cause our policy makers to take careful stock before progressing every new proposal, to consider “is this change really necessary at this hectic time?”

For more, listen to Daniel Hamel and Ben Kefford discuss KPMG's recent report and framework, Coordinating electricity market reform: A framework to assess the congruency of wholesale market reforms in the National Electricity Market. Listen to the discussion here.