Consumers to accelerate the energy transition

New energy technologies are helping to transition the world, with energy utilities following suit. However a new Morgan Stanley report warns that an accelerated consumer-led change could arrive sooner than expected.

According to the report – Consumer Revolution: Shining a light on how the Utilities world is changing – the “accelerated” transition will be led by consumers wanting to take greater control of their energy use and generation. The organisation’s international AlphaWise energy survey, which examines 7,000 people in 7 countries, shows that 1 in 3 consumers are planning to generate their own electricity in the next five years, and 80 per cent of these people keen to trade energy in the future.

While Italian and Spanish consumers are projected to lead the uptake of new energy technology, Australia is expected to spearhead actual installations. But what’s driving this change? We take a look.

Electric vehicles (EV), energy storage, and distributed energy are expected to grow rapidly, according to the report, coexisting with a centralised grid as well as smarter grids. 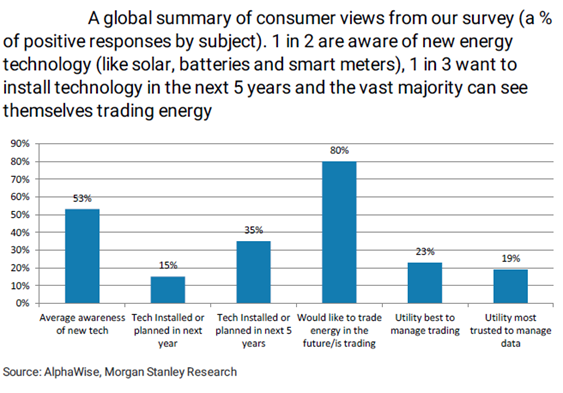 However Morgan Stanley’s research shows that one key driver of accelerated future growth is a greater awareness and an interest of new energy technologies amongst younger generations (Figure 2). 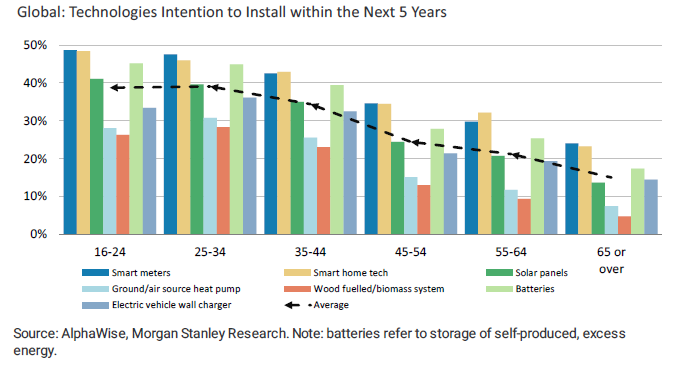 The global survey shows that younger generations are more likely to trade energy (if they’re not already – more below) and they are keen to install more energy technologies. As younger generations age and increase their disposable income, technology costs will inversely decline, leading to an accelerated rate of new energy technology uptake: “as time passes, and costs come down even further, the transition should accelerate further. The consumer is a winner, for utilities it is less clear,” the report says.

The global survey figures show that the overall awareness of these technologies, on average, is similar between countries. UK and German consumers show the greatest awareness (57 per cent and 56 per cent respectively), with the US showing the least (49 per cent). While, on average, around half of the Australians surveyed were aware of the technologies (51 per cent).

Across the globe consumers are most aware of solar panels (78 per cent), smart home technology (70 per cent), and smart meters (58 per cent).

Of the Australians surveyed, 84 per cent had knowledge of solar panels, followed by smart home technology (69 per cent), and smart meters (59 per cent). Australia’s battery awareness (59 per cent) outperformed all other countries, which could be attributed to global companies like Tesla using Australia as a testing ground and therefore, increasing consumer knowledge.

Globally, over 50 per cent of consumers intend to have a smart meter by 2024 with government initiatives helping to drive consumer engagement. And with solar panel and battery installations anticipated to rise, there is also an expected reduction in demand.

Based on current consumer intent, all of the new energy technologies assessed are expected to steadily grow, with 1 in 3 consumers surveyed wanting to install energy technology in the next 5 years.

Figure 4: Installation levels to 2024, based on consumer intent 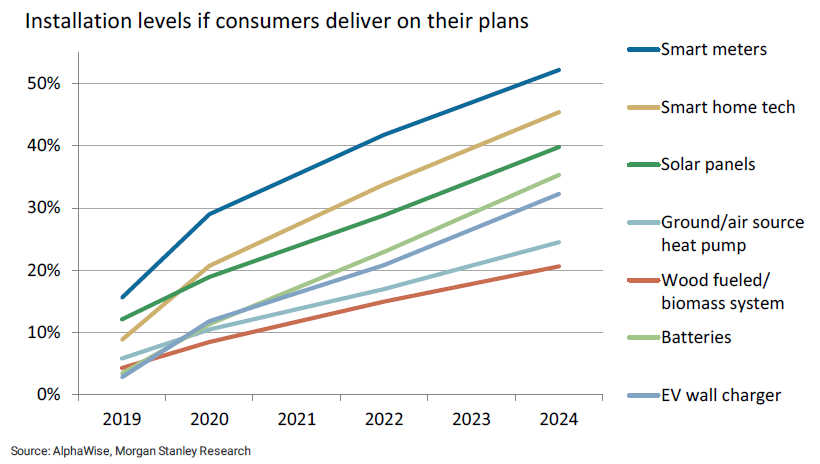 Italian and Spanish consumers have the highest intention to install new energy technologies (and are therefore also more interested in trading energy) this coincides with Italy’s 100 per cent smart meter installation rate, which is closely followed by Spain at 91 per cent. This high rate of intention is also helped by the perceived high economic attractiveness of installing new energy technologies in both countries.

Figure 5: Global intention to install in the next five years, by country

Of Australian’s surveyed, 60 per cent intend to install new energy technology by 2024. Batteries again top the list for intended Australian installations (40 per cent), followed by smart meters (37 per cent) and smart meter technology (36 per cent).

However, Morgan Stanley warns that intent does not equal actual uptake. In previous global surveys, consumer intention has ranked higher than actual installations, due to external impacts like subsidy changes. The report states:

“Our Australian supply survey showed a similar disparity between intention to install and actual uptake of batteries (which were not subsidised at the time). But the reverse in solar panels alone (installs proved higher than anticipated, which have better economics and subsidies).”

Morgan Stanley points out that the experience of investing in one new energy technology has a “snow-ball effect”: Actual uptake of one technology influences a consumer to purchase additional energy technologies, and this “self-reinforcing cycle” is expected to further drive technology uptake forward.

Education also has a direct influence on the actual installations of new energy technologies, according to the report, and it highlights that government policies have helped to increase this awareness. New smart home technologies have also attracted more consumer engagement, especially in managing household energy use. 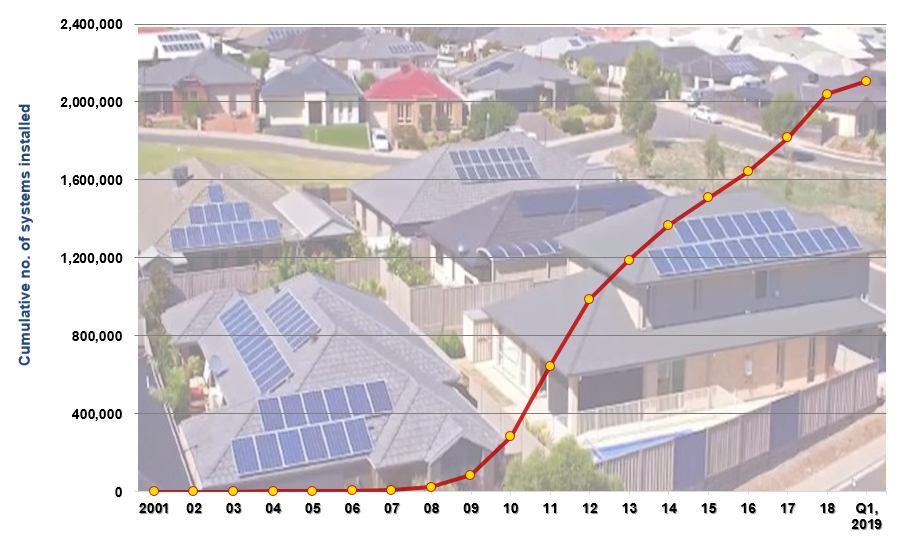 “Australia leads the current consumer transition, with behind the meter installations at around 30 per cent of connections. Rooftop solar will reach 14 per cent of total installed capacity in May 2019 (MSe), catalysed by an early adopting public, generous initial subsidies, high traditional tariffs, and global suppliers using Australia as a testing ground (particularly in batteries, where Australians show highest product awareness globally). The key debates in Australian Utilities are around firming of variable renewable energy resources, and orchestrating ubiquitous distributed energy resources.”

Globally there is a strong consumer demand to trade energy. Currently 11 per cent trade globally, with 69 per cent of the people surveyed expressing that they would like to trade in future.

Spain and Italy are again expected to lead a rise in trading, with 82 per cent and 78 per cent of respondents respectively keen to trade/sell in the future. Yet Morgan Stanley states that with Australia consumers “significantly ahead” in installations, they appear “more likely” to want to engage in energy trading, supported by 70 per cent of Australian respondents showing interest in energy trading.

Figure 8: Desire to trade, by country 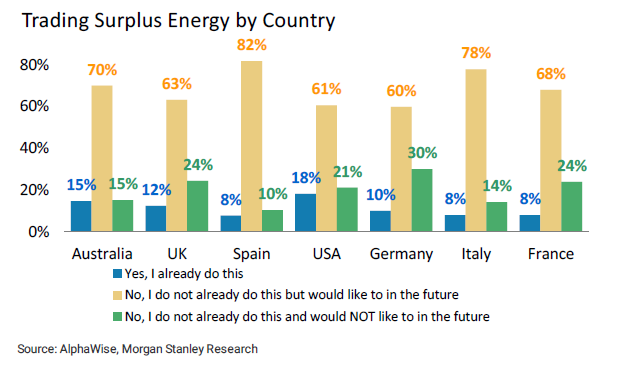 Of the early adopters already trading, 56 per cent do it themselves, while people who are planning to trade would prefer to do it through a company (43 per cent).