Coal closures a key factor in interconnector case: But who pays?

A second Basslink has been touted for some time but last week received a boost with the Federal Government announcing its support at the same time that the interim feasibility study into the project was released.

In tandem with support for the Marinus Link project, the government has also supported the feasibility assessment of three shortlisted pumped hydro sites, which form part of Tasmania’s “Battery of the Nation” initiative. If completed, the projects could provide up to 40GWh of power.

As part of its announcement the government committed to developing an underwriting mechanism for Tasmania’s Battery of the Nation and funding to establish a Priority Transmission Taskforce “to support new models of funding interconnection transmission”[i]. The reason for the inquiry into new funding models will soon become clear.

A second interconnector between Tasmania and the mainland was previously considered after record low rainfall and an extended fault in the Basslink interconnector.  It was formally assessed by Dr John Tamblyn, the inaugural chair of the Australian Energy Market Commission (AEMC)  at the request of the Federal and Tasmanian Governments.  His conclusion was that there was remaining uncertainty as to whether a second interconnector would be an economically feasible investment that would serve the long-term interests of electricity consumers.

So what does the new study say and what factors would support the viability of Marinus Link?

In his 2017 report, Dr Tamblyn suggested that a detailed business case be developed once one or more of three preconditions were met. These were:

1. The Australian Energy Market Operator (AEMO), in consultation with Hydro Tasmania and TasNetworks, concludes in a future National Transmission Network Development Plan that a second interconnector would produce significant positive net market benefits under most plausible scenarios.  In its Integrated System Plan (ISP) AEMO found that a second interconnector would be needed to support the Battery of the Nation initiative to increase pumped hydro storage in Tasmania. It noted that Marinus Link would facilitate development of Tasmania as either one or multiple Renewable Energy Zones and would be beneficial if further renewable generation development in the state “delivers the potential value highlighted by Battery of the Nation studies”.  Marinus Link was listed as a Group 2 project, although implementation was suggested for 2033, dependent upon other projects such as Snowy 2.0 and Battery of the Nation affecting its timing.

2. Additional interconnection is approved for construction between South Australia and the eastern states. In February, ElectraNet released the SA Energy Transformation Project Assessment Conclusions Report, which is the final step in the Regulatory Investment Test for Transmission (RIT-T) process for a SA-NSW interconnector. Approval for the project, EnergyConnect, by the Australian Energy Regulator (AER) under the RIT-T process is expected to be known in the second half of this year. (For more details on that project see SA EnergyConnect – Riverlink with Rigour).

3. A material reduction occurs in Tasmanian electricity demand. Demand for 2017-2018 increased by 3.6 per cent according to the Office of the Tasmanian Economic Regulator[ii] to reach 10,909GWh.

The Tasmanian Government, with Federal support via ARENA, asked TasNetworks to assess the feasibility based on the new developments outlined above.  The project has also subsequently been listed as a high priority initiative in Infrastructure Australia’s Priority List[iii].

Economic Worth Link to Coal

The extent and timing of the economic value Marinus Link would deliver is closely linked to the closure of coal-fired plants in the National Electricity Market (NEM). The initial feasibility study highlights that with the retirement of 7000MW of the NEM’s present coal-fired generators (about a third of the current fleet) by the end of the 2020s the economic worth of Marinus Link would be expected to be positive from the mid-2020s, which can be seen in figure 1 below.

If Australia’s existing coal-fired generators remain in service until the end of their design lives, Marinus Link would be expected to deliver a positive economic worth in the mid-2030s. The economic worth of the interconnector would increase as coal retires (figure 1).

Figure 1: Economic worth of Marinus Link Under Different Scenarios 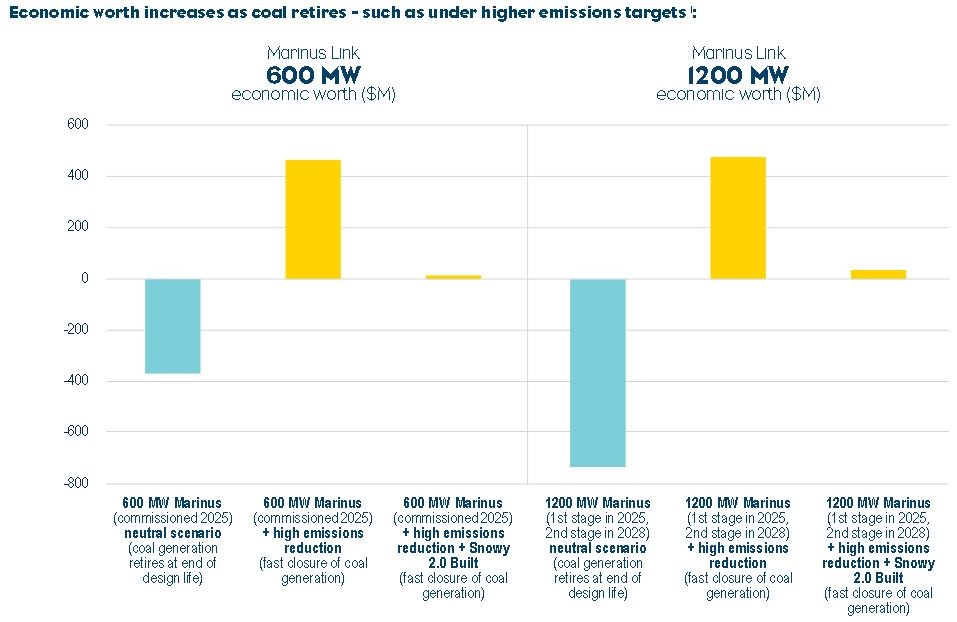 The NEM has 23GW of coal-fired generators and the current expected retirement dates for various coal plants operating in the market is shown below. 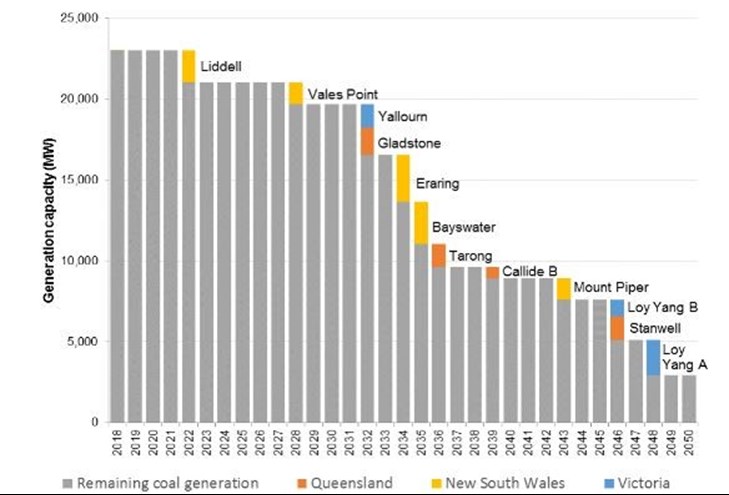 The market operator expects 16GW of capacity to leave the NEM, but by 2050[iv]. This is in addition to the 1680MW that would retire with the closure of the Liddell power station in NSW which has previously been announced.

The Marinus Link Initial Feasibility Study notes that the “economic feasibility and interconnector timing results are influenced to a lesser extent by other factors such as the presence of Snowy 2.0 and state-based renewable energy targets, which both act to dampen the benefits delivered by Marinus Link. Analysis suggests that accelerated coal-fired generation retirement, such as under a high emissions reduction target, or potentially as a result of state-based renewable energy targets, would see Marinus Link providing positive economic worth, even with Snowy 2.0 in service”.

The fact that the economic worth increases as more coal retires was also previously flagged in AEMO’s ISP which stated that the economic justification behind an additional Bass Strait interconnector “is expected to be driven primarily by the long-term need for energy storage across the NEM, and the projected replacement of energy produced by brown coal-fired generation in Victoria”.  Additional benefits would include accessing high-quality wind resources in Tasmania and improving hydro efficiencies by repurposing and refurbishing existing assets.  It notes that AEMO’s least-cost modelling did not automatically select additional interconnection to Tasmania via Marinus Link and found  that the “merits of Battery of the Nation and associated new interconnection to Tasmania will largely depend on the actual costs of energy storage in Tasmania relative to those on the mainland.”[v]

Show Me The Money

The Initial Feasibility Study shows that the MarinusLink would be technically feasible either as a 600MW link or a 1200MW link (delivered in two 600MW stages). A 600MW link would cost between $1.3 billion and $1.6 billion while a 1200MW capacity interconnector would cost an estimated $1.9 billion-$3.1 billion.

One issue to emerge has been how the link should be paid for.  The initial feasibility study argues that should the project proceed, it will be important that the framework to recover the costs for interconnector services fairly allocates costs to those who benefit from the services”. It notes that the revenue recovery based on regional pricing approach does not align with the NEM-wide benefits identified, and as a result Tasmanian customers’ transmission charges would increase disproportionately relative to the benefits they would gain.

With Marinus Link as a regulated interconnector, the costs would be recovered from Transmission Use of System charges where existing rules allocate the costs to the state in which the assets are built. This has not previously been done for an undersea link (Basslink, which began operating in April 2006, is operated as a market network service provider, i.e. an unregulated asset), and apart from the identifiable assets in each of Tasmania and Victoria at the ends of the interconnector, it’s unclear how the costs of the cable in Commonwealth waters would be allocated between the states.

The initial study argues that it should only proceed as a regulated service if there are contributions from government and/or the pricing framework is modified to recognise that the benefits are “principally” to the mainland. The Prime Minister, Scott Morrison, publicly weighed into this issue and stated that it was only fair that Victoria pick up the costs of the project because the “beneficiary of having that reliable power will be in Victoria”.[vi]

Further work is to be undertaken this year to consider this assessment further. And the report notes that AEMO had recognised in its ISP that existing generators “may” retire earlier than design life due to emissions reduction targets – while factors such as reliability and other market factors could impact on the economic viability of some generators.

This is because it would facilitate development of Tasmania’s lower cost, dispatchable resources such as additional hydro (Tasmania is also seen to have very strong wind resources),

So what are the next steps for the Marinus Link? The project website points to:

[iv] AEMO observations: Operational and market challenges to reliability and security in the NEM