Clean energy generation: On track or lagging behind?

An International Energy Agency (IEA) assessment of 18 energy-related technologies has found that only one - solar PV, which was deployed at record levels last year – is on track to meet long-term climate, energy access and air pollution goals.

The IEA tracks a range of energy technologies and sectors that it considers are critical to achieve a transition to lower emissions[i].

Its most recent Tracking Clean Energy Progress assessment found that most of the technologies were not on course to meet reduction targets, and that this contributed to a global increase in carbon emissions of 1.4 per cent in 2017.

The agency’s assessment considers where technologies are today, and where they need to be to reach the Paris Agreement’s “well below 2°C” climate target, based on the agency’s own Sustainable Development Scenario (SDS).

The SDS was developed to outline the scale of the transformation needed. Under the SDS, energy-related carbon dioxide (CO2) emissions are expected to peak around 2020 and then decline rapidly. By 2040, they are expected to be at around half of today’s level and on course toward net-zero emissions in the second-half of the century.

So what’s on track and what’s not?

Technologies significantly not on track included coal-fired generation, which is responsible for 72 per cent of energy sector emissions. The IEA notes that development of coal plants rebounded in 2017 after falling for the previous three years. It also notes that carbon capture and storage remains stalled. Also in the energy sector, onshore wind and energy storage were downgraded last year as their progress slowed.

Below we look at what the assessment reveals for gas, coal-fired, and nuclear power generation.

The IEA found that gas generation developments slowed in 2017 to 1.6 per cent. This was mainly driven by a decline of 7.6 per cent in the United States, where gas prices increased.

The 2017 outcome followed significant growth in gas plant developments in 2016. The IEA described 2016 as a “remarkable year” with gas generation increasing by almost 6 per cent (this compares to a historical average growth rate of 4.7 per cent in the 15 years to 2015). Gas-fired power plants benefited as gas oversupply lowered prices in key regions.

In terms of new investment, gas-fired power increased by nearly 40 per cent in 2017, led by the US and the Middle East/North Africa. Despite the positive trend, final investment decisions for new gas-fired power plant capacity fell to 50 GW in 2017, which was the lowest level in a decade (although final investment decisions for gas plants were more than 1.5 times those for coal). The slowdown was attributed to a drop in projects in the US and the Middle East and challenging market conditions in places like Europe with persistently low wholesale power prices. 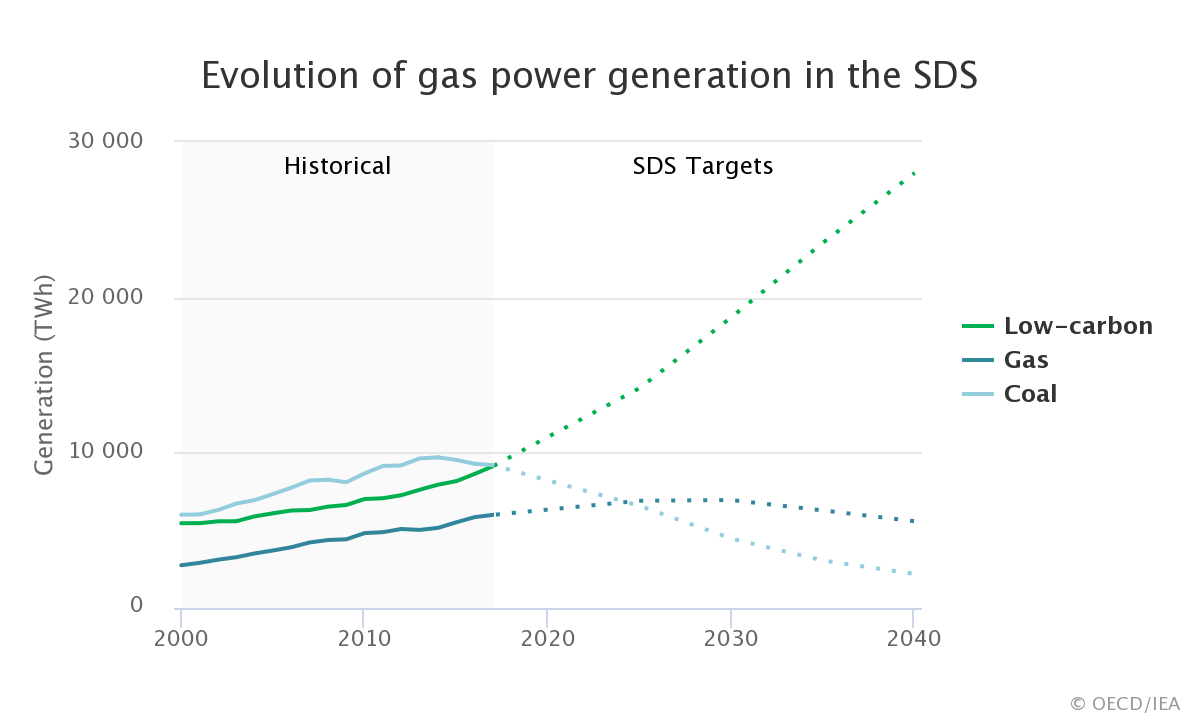 The agency notes that gas is facing “fierce” competition from cost-competitive renewables. Growth prospects for gas will be affected not only by the competitiveness of gas prices, but also by the recognition of the benefits of gas compared to coal for pollution.

While gas as a transition fuel has fallen behind the SDS target, it tends to vary greatly from year to year. The report notes that a key factor for gas development will be improving flexibility, which will assist the integration of a growing amount of renewables.

Unabated coal-fired power generation (plants without Carbon Capture, Utilisation and Storage, or CCUS) increased by 3 per cent in 2017, offsetting the previous year’s decline – and rebounding after three years of consecutive falls.

The IEA notes that this growth is driven by increases in coal generation in China (+4 per cent) and India (+13 per cent) due to rising electricity demand. Southeast Asia also experienced strong generation growth.

The United States and the European Union experienced generation declines in 2017, of -33 TWh and -22 respectively. In the US competitive gas generation and renewables have pushed out coal, according to the report, while low gas prices and carbon policies prompted switching to gas in the EU.

Coal-fired power generation remains the largest source of electricity generation (37 per cent) worldwide and is responsible for 72 per cent of energy sector emissions. The report notes that investments have moved to more efficient supercritical and ultra-supercritical coal power generation technologies. In 2017, the total capacity of current subcritical plants waned as retirements of over 20GW exceeded capacity additions.

Unabated coal-fired power generation is currently not on path to meet the SDS target. The agency estimates that it requires an annual decrease of 5.6 per cent until 2030, and current investment levels are nowhere near enough to increase coal-fired power generation with CCUS from less than 1 TWh today to the SDS goal of 305 TWh by 2030. The capacity of coal plants already exceeds the SDS generation target, so the report states that more retirements and/or decreased utilisation is required. 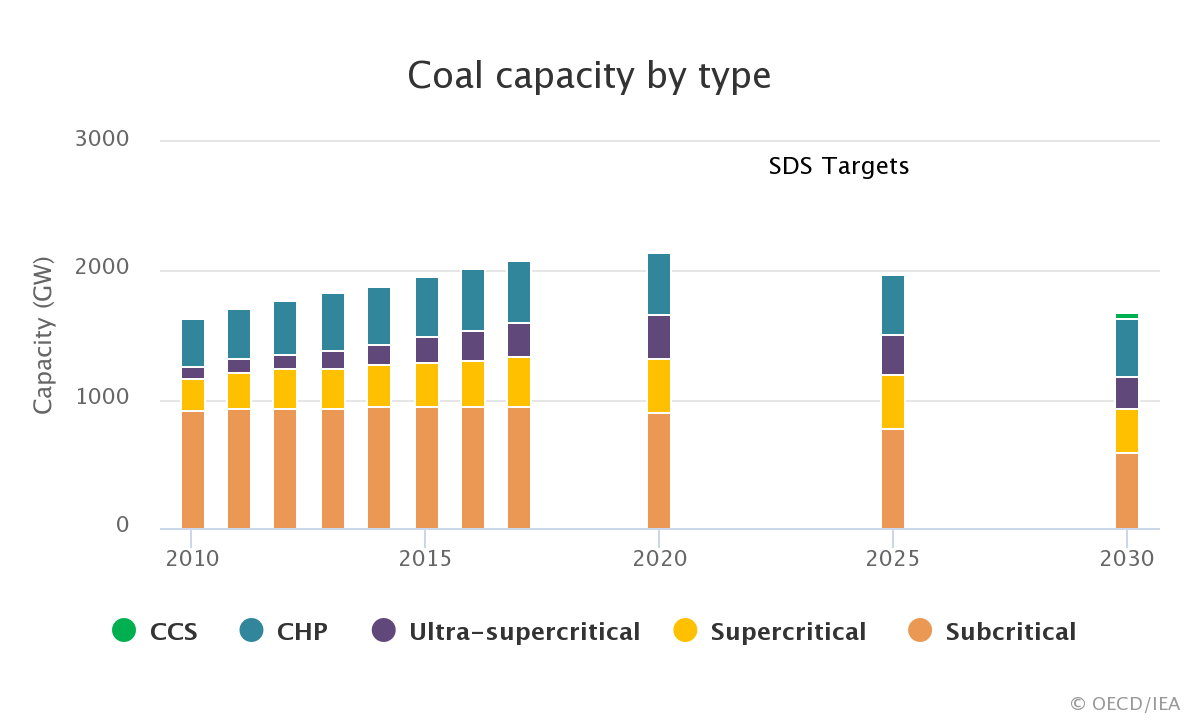 Despite the increase in generation, investments worldwide in coal power dropped by one-third (led by China) due to a slowdown of new coal plant commissions. Capacity of final investment decisions also experienced a drop to 30 GW, the lowest level in over 15 years. This decrease has been led by China, India and Southeast Asia. In China, low power plant utilisation rates are an indication of an overcapacity of coal, as gas and renewable energy generation sources continue to grow.

The agency’s analysis shows that while unabated coal-fired power generation appears to be peaking, new investment is still happening in some regions and the rate of the world moving away from non-CCS coal is currently nowhere near enough to achieve the SDS target.

In 2017 nuclear generation new capacity fell to 3.6 GW, from 10 GW in 2016 (Figure 3). Construction starts, a proxy for final investment decisions, remained low. Declining investment, announced phase-out policies and planned retirements, combined with only 56 GW of nuclear capacity under construction in 2017, suggest that meeting the goal of 185 GW of net increase needed by 2030 will be challenging. 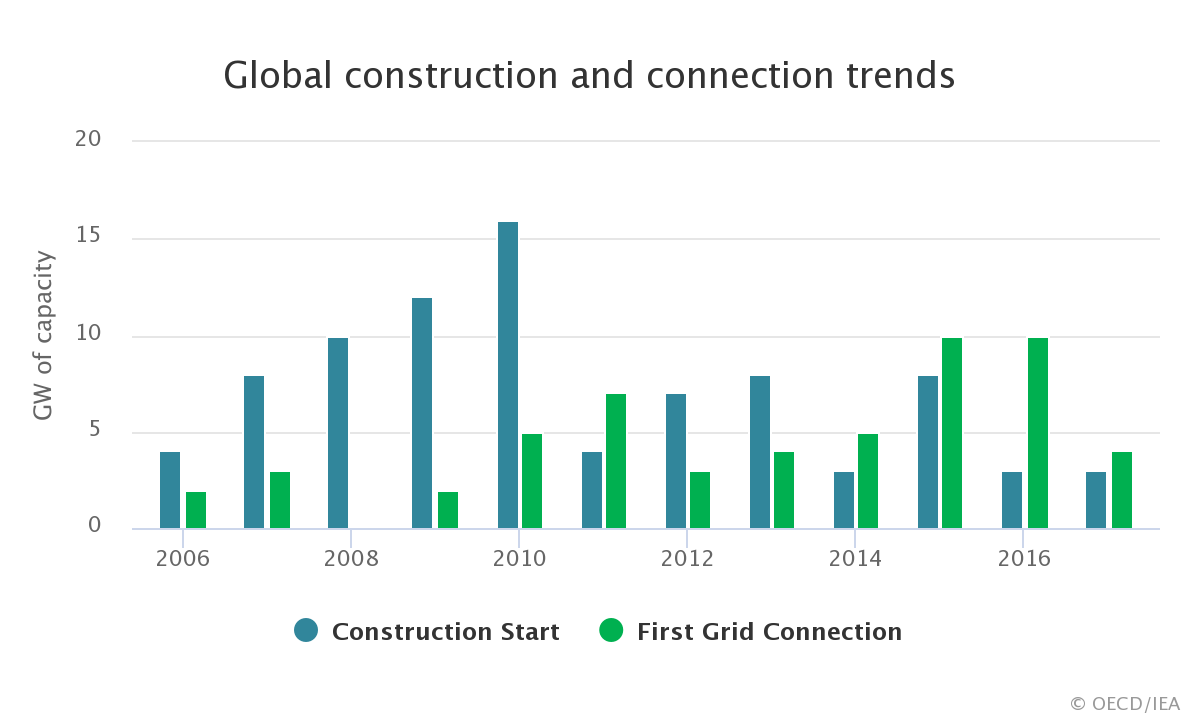 Over the past five years, 33 GW of capacity was connected to the grid, with China forming two-thirds of this total. Over the same time, 18 GW has been shut down including 7.3 GW in Japan and 4.9 GW in the United States.

China, India, and Korea account for half (31 GW) of the reactors currently under construction. Over the past two years construction starts have been low in China with 2.3 GW in 2016 and a 600 MW fast reactor in 2017. However China is now “poised” to commence construction on several new reactors, with up to eight approvals anticipated in 2018 - this is mostly due to the government’s five-year plan for nuclear power development released in 2016, which projected 58 GW installed plus another 30 GW under construction by 2020.

Nuclear power is expected to be on track to meet the 2020 SDS target of 438 GW installed capacity, as construction of 40 GW is completed. However, since it takes more than five years to build a nuclear plant, it will be increasingly unlikely that nuclear power will meet the 2025 target of 490 GW installed capacity, as global phase-outs offset progress. Nuclear policies also remain uncertain. Construction decisions by China, India and Russia in 2018-2020 will play a major role in whether nuclear power will meet the SDS targets in 2030 and beyond. 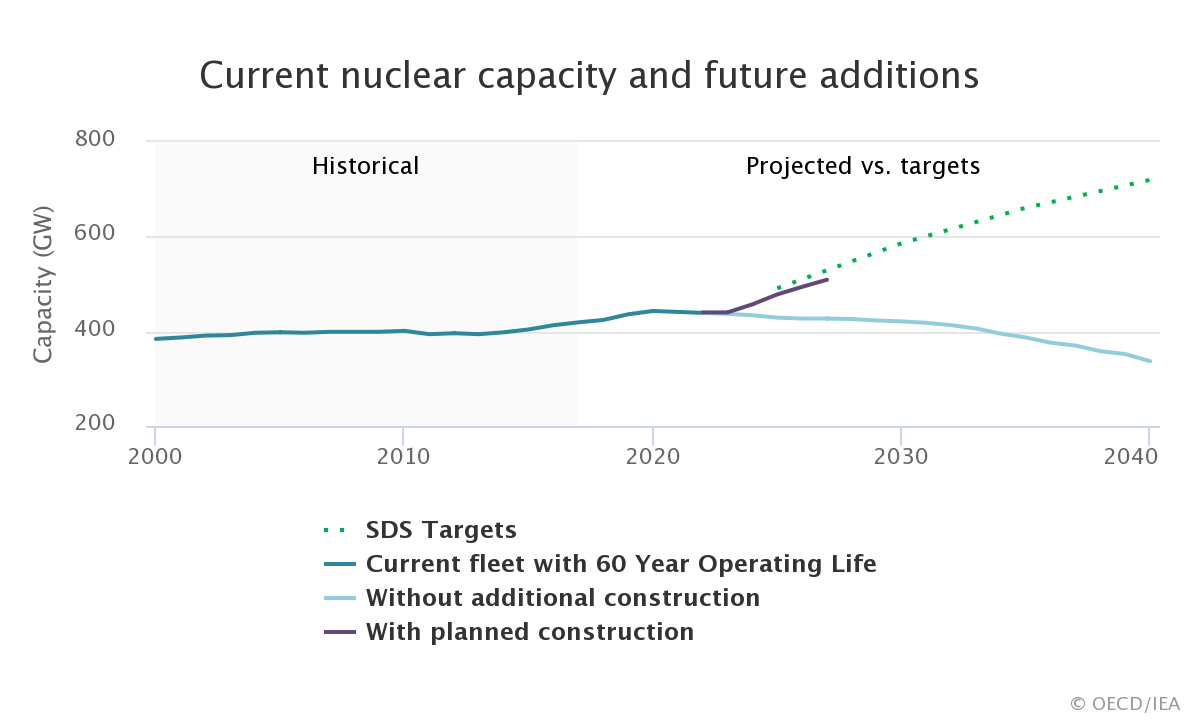 While nuclear is currently behind the SDS target, China’s ambitions may help it to catch up. If China executes its five-year plan and India fulfils its plan for 63 GW by 2032, the IEA estimate that the SDS targets could be reached. In addition, the Russian state-owned corporation Rosatom signed more than ten agreements in 2017. While many of these are exploratory, some show progress towards actual construction.

A following article looks at the IEA’s assessment of wind, solar and CCS generation.