The Great Wall ahead of China's integration of renewables

China has an aggressive renewable energy strategy, including ambitious project construction included in its five year plans. China has seen rapid growth in renewable energy, particularly wind. Between 2003 and 2013, the installed capacity of wind power in China grew at an average rate of over 63 per cent annually[i]. As of 2013, China had over 92GW installed wind and solar capacity, and it is now the largest wind market globally.[ii]

The dramatic increase in renewable power is driven by the Renewable Energy Law of the People’s Republic of China which came into effect in 2006. The Law requires each province and network business to obtain targeted amounts of renewable energy. Figure 1 shows the increase in wind and solar capacity installed in China since 2003. 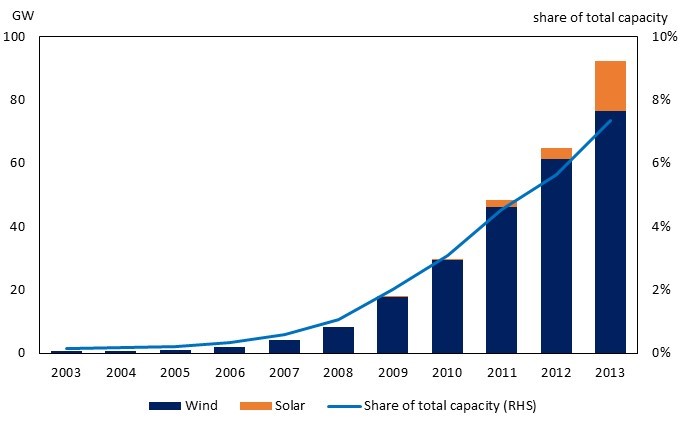 While this investment and rapid expansion of renewable capacity is an encouraging sign for lowering emissions (to the extent that renewable generation displaces coal), the management of intermittent energy has proved problematic for China.

While China has around one third of global installed wind capacity, it uses less wind energy than the US, whose wind capacity represents 17 per cent of global capacity.[iii] In 2010 there began to be serious issues with unused generation, or ‘curtailment’ of renewable power. This curtailment occurs when there is an imbalance between generation and demand which results in excess generation going unused. Curtailment rates peaked in 2012 with almost 21TW of wind power generated in China not being used, see Figure 2. In some provinces, curtailment rates of wind generation were as high as 32 per cent.[iv] 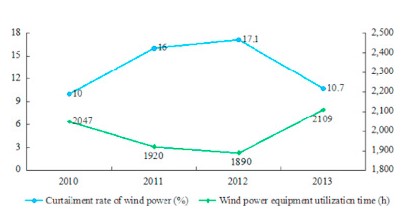 While curtailment rates have declined since 2012, in 2015 the rate of wind power curtailment was still 15 per cent of generation.[vi] These figures are concerning because they represent foregone emissions reduction and a dead weight loss to society from the inefficient use of energy generation assets.

China’s wind curtailment is due not only to the natural variability of renewable power but also factors involved in the planning and management of wind resources. The volatility of wind and solar generation creates challenges for power management, such as maintaining the flow of power while frequency, voltage and fault levels fluctuate with changes in supply and demand. To compound the issue of power management, the infrastructure to move electrons to provinces that require them has lagged renewable development.

China’s approval process for wind farms has proved timely, but the necessary grid upgrades needed to cope with the increasing renewable capacity are slow to be approved and constructed. This has resulted in a mismatch between renewable development and appropriate grid integration where transmission capacity lags behind generation by about three to five years. [vii]

The location of China’s wind farms in relation to the main load centres creates difficulty in matching demand and supply and creates the need for network connections to carry renewable generation to the places it is needed. As shown in Figure 3 the main wind resources are located in the North West, North and North East of China, representing over 90 per cent of China’s installed wind generation capacity[viii]. 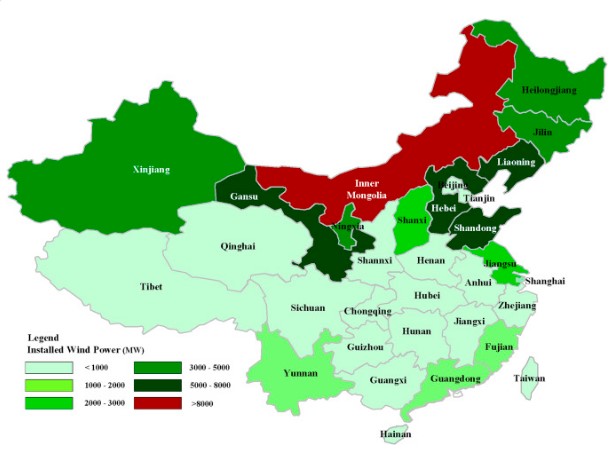 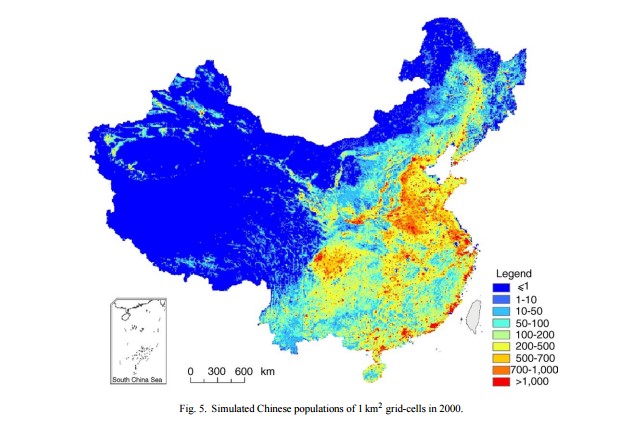 China’s population, in contrast to its wind resources, is centred on the east coast and extends into the south (Figure 4). It is clear that China’s population centres and wind resources are geographically separated. This distance between power supply and demand creates difficulty in energy system management. To enable the transport of wind power, China has constructed ultra-high voltage transmission lines, which are the longest in the world, some of which stretch as long as 1000km[xi]. The high voltage lines operate at high efficiency but represent significant infrastructure investment and ultimately cost to the nation where investment is not guided by market incentives. The process of rolling out renewable projects under non-market considerations has resulted in inefficiency and costly under-utilisation of both generation and network resources.

While technical problems contribute to the curtailment of wind power, major issues in the market mechanisms and policy limit the uptake of wind energy by the grid. At present, electricity prices are set centrally and do not respond to changes in supply. Additionally, maximum output from wind generators is set by energy dispatching centres at a low rate due to the variability of wind generation. [xii] Similarly, thermal generators are allocated a relatively high output due to their dispatchable generation. Currently there exists no market incentive for grids to use wind capacity above minimum levels as prices do not vary between generation sources.

As China’s income level rises, urbanisation and electrification will continue to increase and the demand for electricity in the nation will increase[xiii]. The need for more energy as China develops coupled with China’s emissions reduction goals, will increase the urgency and importance for making efficient use of all energy resources. Effectively integrating the significant amount of intermittent generation already deployed in China is key to reducing curtailment. Figure 5 shows forecast energy demand for China, under a business as usual scenario holding all policies constant from late 2015. Figure 6 shows rising electricity intensity in China, as incomes rise and urbanisation drives consumption of electricity per person higher. 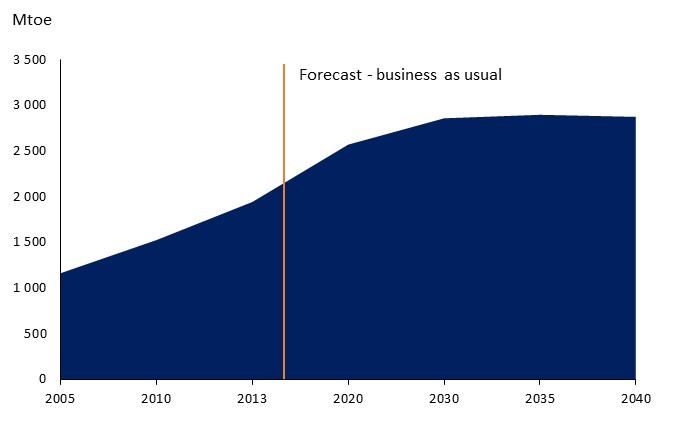 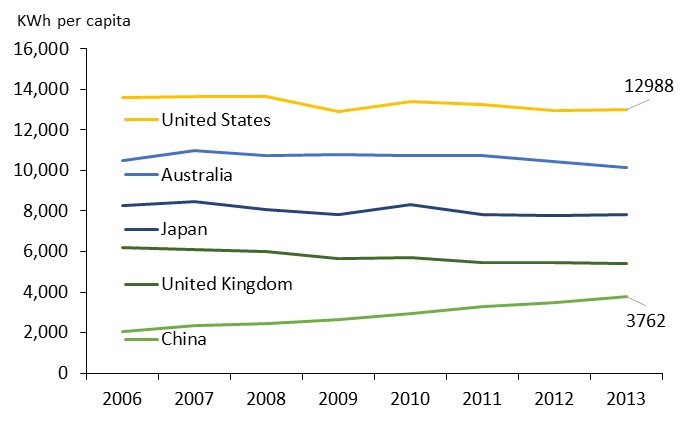 The Chinese government has been working to reduce curtailment and has released a nine point plan to improve the integration of intermittent generation to the grid. In March 2016 China’s National Energy Administration (NEA) announced a mandate that network businesses should provide grid connection to all renewable sources to reduce curtailment.[xvi] In addition to improving network infrastructure to carry energy, the National Reform and Development Commission and the NEA stated that China’s first electricity trading centres would be created in Beijing and Guangzhou.[xvii] The trading centres are hoped to improve the commercial incentives for all generators and begin to move China’s power system toward a least cost dispatch model. The current mandated dispatch means that at times, least cost generation is not dispatched while higher cost generation is dispatched. The move toward energy trading will mean that dispatch becomes more cost effective and lowers emissions in energy generation.

In an effort to increase the share of renewable generation and to reduce emissions and reliance on fossil fuels, in 2016 construction of new coal capacity was banned in 13 provinces.[xviii] China has encouraged renewable generators to produce above minimum guaranteed levels by implementing competitive pricing for renewables.[xix] These steps bring China closer to a ‘green dispatch system’ where renewable generation is favoured due to its low marginal cost at times when it is producing electricity. In September 2015 in a joint statement by President Xi Jinping and US President Obama, a competitive dispatch system was called for by the Chinese leader.

Comparatively, Australia’s competitive wholesale energy market has afforded Australia lower emissions dispatch of generation at times when renewable generators are producing. The determination of lowest cost producer in Australia’s power markets is helping Australia to decarbonise through flexible market mechanisms that allow investors to assess the viability of new generation through wholesale prices. This market discipline risks being undermined by poorly designed jurisdictional incentives which skew commercial incentives to invest in renewable generation. China’s experiment into very large and rapid renewable investment is an important step towards curbing emissions, but it demonstrates that while governments can drive renewable investment by central diktat, this alone cannot drive the efficient rollout and integration of such generation into the existing power system. Policy goals must be backed up by appropriate planning, power system management, infrastructure and supporting market mechanisms to ensure effective integration of intermittent renewable generation.

By Emma Richardson and contributions by Isobel Graham.