The fallout from the Texas blackouts has continued, with the question of system reliability front and centre. And the question of whether there should be a capacity market or other mechanism in place to ensure supply has re-emerged[i].

Like the National Electricity Market (NEM), Texas with its energy-only market does not have a capacity market and uses scarcity pricing to ensure enough supply is available to maintain its reliability requirements. Other US markets like the ISO-New England and PJM interconnection have capacity markets that offer incentives for plants to be available “just in case”.

ERCOT's market and system operations have been successful over the last several years even as demand has continued to rise in Texas, according to a long-term reliability study by the North American Electric Reliability Corporation (NERC) in December. But its assessment also came with the caveat that with a large amount of new wind and solar generation being added recently to its grid, although this provided on-peak capacity to lift reserve margins for summer peak demand, there “is increasing risk of tight operating reserves during other periods as thermal generation capacity has declined”

It did not foresee the extreme events of February, but noted that ERCOT had flagged reduced availability of operating reserves over a range of several hours around the time of peak demand in summer. And that the amount of available reserves in non-peak months was declining, with some months like March and October to become months with the lowest peak-day reserves during the year.

So would a different market approach have helped Texas? Would large reserves of generating capacity be worth the cost to improve electricity reliability? It seems unlikely that with the scale and severity of the extreme weather felt by Texas that a capacity market could have prevented outages.

Capacity Markets’ effectiveness depends critically on the foresight of their designers. The classic design is to focus purely on delivering bulk capacity into the highest hour of demand, which for the USA and Australia typically occurs on a summer weekday. However a real power system can also be stressed at other times. For example, a capacity market designed around the summer peak, when gas is plentiful, will not oblige gas plants to maintain standby liquid fuel, which is necessary to manage extreme cold scenarios.

A polar vortex in 2014 left nearly a quarter of generation unavailable in the PJM Interconnection and as a result capacity market rules were changed. “PJM notes these changes helped ensure enough power was available during the extended cold snap in 2018, when forced outages peaked at under 12%”[ii].

PJM Interconnection and ISO New England two US regions with mandatory capacity markets procure capacity through auctions every three years. They now have some of the largest surpluses of generating capacity, with PJM projected to have a 41 per cent reserve margin at a minimum in the next five years and that could be as high as 83 per cent in 2025, according to the North American Electric Reliability Corporation (NERC)[iii] (see figure 1) reliability assessment. 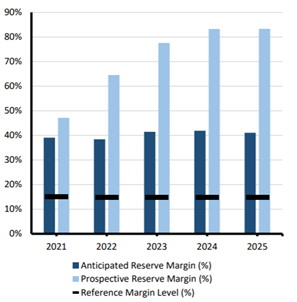 It also comes with a price tag. The American Public Power Association (APPA) estimates that in 2019, capacity prices in PJM added $119 to each homeowner’s annual bill – equivalent to a 9 per cent premium. And according to APPA, capacity market payments have grown to account for an increasingly large share of total wholesale electricity costs in the PJM and New England.

The APPA estimates that US$111 billion has been paid or pledged by PJM to capacity suppliers through the middle of 2022, but only a small amount is committed to financing new capacity. About 92 per cent has been for existing power plant capacity[iv].

The Mandatory Capacity “Markets” and the Need for Reform report (March 2020), commissioned by APPA, notes that the capacity markets were initially justified as necessary to provide additional revenue to cover the costs of providing capacity, and were intended to work in tandem with other contracting by public power utilities and investor-owned utilities. An issue is that they are now seen as the central mechanism, and have placed restrictions on mechanisms like bilateral contracting. States have also pursued their own energy approaches and specific types of generation, which has led to continual interventions which have distorted the outcomes.

Capacity markets are not intended as a means to procure specific types of generation technology, yet some states and generators pursue capacity to meet policy objectives, such as fuel diversity and security and emissions reductions.

Capacity markets don’t differentiate between inflexible and flexible capacity, i.e. the ability to cycle up and down in sympathy with demand and renewable energy. There are therefore concerns they can prop up older less flexible generation beyond their value to the market. It is estimated that around 18GW of coal capacity in the PJM region would be uneconomic if there were no capacity market payments[v].

APPA’s arguments against capacity markets include that they are more costly, complex and opaque, and subject to frequent rule changes. The auctions can also lead to excess capacity above that required to meet a reserve margin, while the short-term revenue streams may not be suited to financing long-lived generation assets.

The APPA advocates for reforms[vi] and a move away from mandatory capacity markets to voluntary residual markets, an interesting contrast to some recent commentary about the Texas blackouts.

[ii] Capacity Markets The Way of the Future of the Way of the Past? Energy Systems Integration Group, 27 March 2020

[v] Capacity Markets: The Way of the Future or the Way of the Past?, Energy Systems Integration Group, 27 March 2020

[vi] Mandatory Capacity “Markets” and the Need for Reform, WBK for APPA, March 2020