This is the first edition of the Australian Energy Council’s Technology Report. The report is a mix of data and news stories from Australia and overseas relating to technology developments that impact on the energy supply chain.

Analysis from Bloomberg New Energy Finance (BNEF) suggests that the price of electric vehicles (EVs) will fall dramatically and will make the 2020s ‘the decade of the electric car’. BNEF’s projections put the price of EVs at parity with their internal combustion counterparts by 2022. This price decrease is estimated to increase EV market share to 35 per cent by 2040 worldwide, a significant increase from the current 0.1 per cent of the global car market. This decrease in price is driven by the reduction in the battery cost, which contributes one third of the vehicle’s total cost.[i] As shown in Figure 1, battery costs have been falling over the past five years and estimates of further decline in battery costs give the potential to accelerate EV sales. 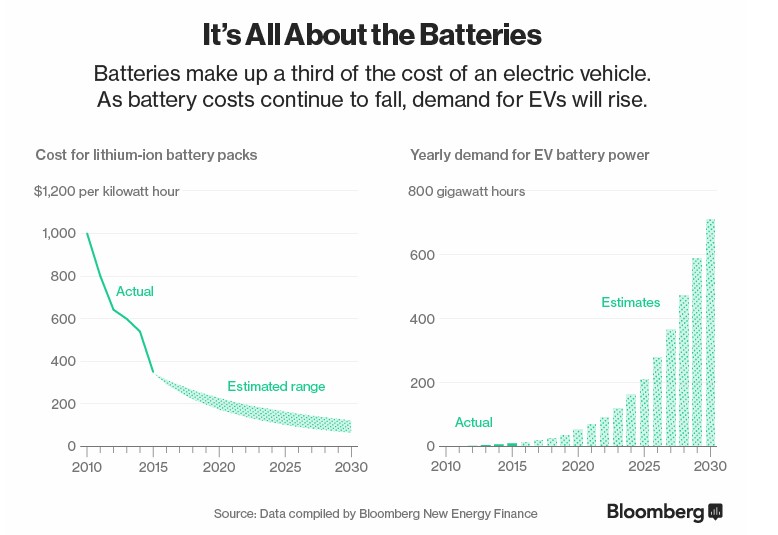 Despite falling costs, the range of EVs available in Australia is still very limited, with most of the offerings being well into the high end price range. The Nissan Leaf is the most affordable EV in the Australian market, starting at $39,990 drive away. However, 2016 sales have so far been disappointing, with only 42 cars sold as of the beginning of September.[ii] Nissan is not planning to bring the Gen 2 Leaf to Australia, so consumers will only have the Gen 1 to choose from. This only leaves BMW i3, at nearly $70,000 [iii] and the Tesla model S and model X, both of which retail for over $100,000.[iv]

There is continued hype over the release of the Tesla Model 3. March 31st saw Tesla begin taking reservations for the Model 3. Australia was the first country able to place an order on the vehicle. According to Elon Musk, Telsa’s Chief Executive Officer, the first 24 hours saw 180,000 order placed globally. The Model 3 will cost US$35,000 when it is released in 2017, but costs for Australia are estimated to be around $60,000.[v] A proportion of this cost would be import taxes. The Australian government is currently reviewing policies to encourage purchases of low carbon vehicles.[vi]

The Federal governments Vehicle Emissions Discussion paper released in February 2016 has raised several possibilities which may support the uptake of EVs, these include:

Figure 2: Summary of policy support mechanisms for EV uptake in place in selected countries in 2015 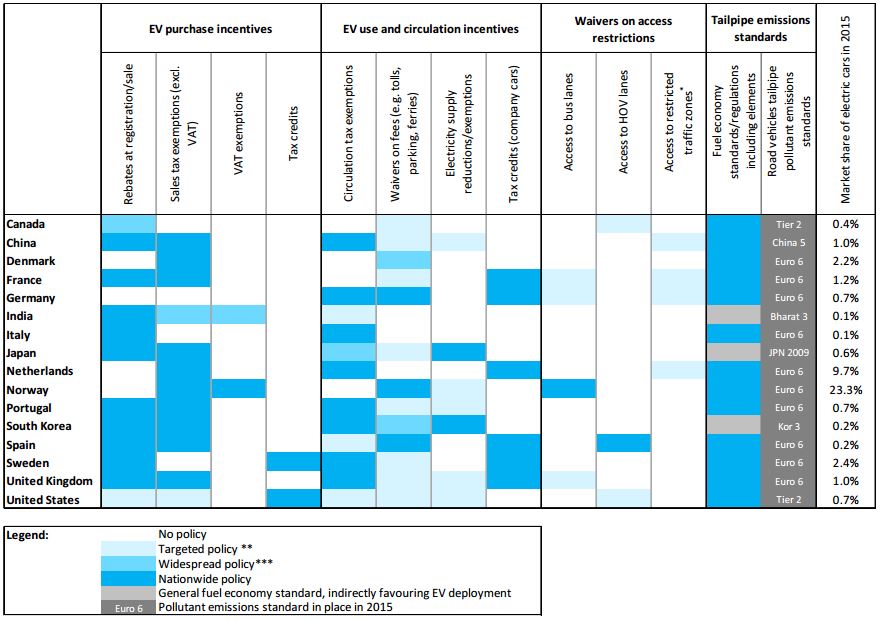 * Such as environmental/low emissions zones.

Regulation has already begun to move to incentivise the purchase of EVs. Earlier this year the Australian Taxation Office (ATO) announced a ruling which may make the economics of owning an EV more favourable. The ruling enables drivers of EVs to claim the same deductions for business use of their car as they currently do for internal combustion vehicles. For a comparison of the costs of EV vehicle travel, see Figure 3, showing Australian Energy Council’s analysis comparing the most recent petrol costs to our calculated costs for charging EVs.

The Energy Council has developed a tool to calculate an eLitre price, comparing the refuelling cost of an EV compared to conventional petrol vehicles on a state-by-state basis. To do this we use the average EV efficiency (in kWh/100km), the average passenger vehicle fuel efficiency, average electricity prices and average fuel prices.

The figures shown in Figure 3 should not be compared to previous technology report calculations. The usage charges have been updated to match the figures used in the Australian Energy Council’s quarterly Solar PV report for consistency. The latest solar PV report and information regarding calculations for electricity usage charges can be found on the Energy Council’s website.

The ACT has the cheapest eLitre price, $0.40/L. All other major Australian cities hover around the $0.60/L mark with the exception of South Australia. The calculated $ per kWh is much higher in South Australia, leading to an eLitre price of $.80/L. Even with the highest calculated price, savings are expected to be $0.34/L. Figure 3 shows state-by-state petrol and eLitre prices. 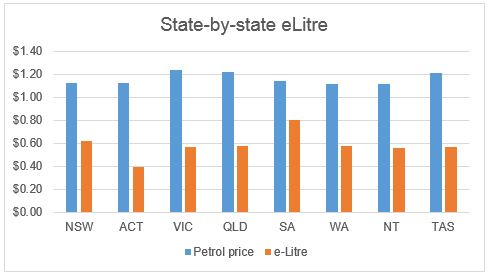 The introduction of EVs will allow increased competition in the retail electricity market, with more flexible offers available for consumers to choose from. AGL are offering unlimited EV charging to consumers for $1/day, beginning November.[vii]  This offer is extended to all EVs, including Teslas, which have battery power up to 90kWh.[viii] This power will be measured with a smart meter and AGL says the power will be carbon offset, resulting in zero net emissions for vehicles charged through this program.

The US has a very encouraging market for EVs, with Silicon Valley based company ChargePoint recently announcing that it now has 30,100 outlets for charging EVs in the US. This is roughly double the amount of McDonald’s restaurants in US, demonstrating the accelerated uptake of the technology. Figure 4 shows the rapid increase in the number of charging stations in the US which began increasing in 2011 and has grown steadily since. Australia’s EV market is in its infancy and charging stations are only now beginning to increase in numbers. ChargePoint shows the location of existing charge points around Australia.

Batteries for home storage of solar power are becoming increasingly available in Australia, with February seeing the Tesla powerwall hit the Australian market. There are an increasing number of choices, with differing capacities and costs. We have listed some of the major brands currently available in Table 1. For a more detailed cost comparison, see Solar Quotes who have compared the price offers of 32 available household batteries.

In a breakthrough for battery technology, a new high performing battery developed by Australian company Gelion has attracted $11 million in investment from a British renewable company. The batteries use nano-technology and are cheaper, and more durable than lithium ion batteries. The developer is Thomas Maschmeyer, the director of the new Australian Institute for Nanoscale Science and Technology, which launched in April this year. The batteries use Zinc, which is 39 times cheaper than Lithium. This new battery technology is hoped one day be included in the structure of houses, to take advantage of quickly developing renewable technology and increase grid stability.

South Australia is set to trial a virtual power plant (VPP), which will consist of 1000 centrally controlled batteries totalling 7 MW of energy storage.[xi] The project will be the largest in the world with the aim to help consumers reduce their energy bills while contributing to grid stability. Customers will be able to purchase heavily discounted (up to 80 per cent)[xii] 5 kW or 7.7 kW Sunverge battery systems, which will come with an intelligent control system. The cloud controlled system will enable consumers to make the most of their solar PV produced electricity using the battery. The batteries will also be able to provide grid level services during peak demand periods to support the high renewable penetration present in the state.

In another virtual energy initiative, a ‘virtual shop’ in which surplus solar energy can be traded between households, small businesses and community groups in their grid is being created by a Sydney entrepreneur. Jitendra Tomar from Local Volts, says that with the system anyone can become ‘an energy farmer’. Jitendra wants the system to change the way consumers buy electricity.

April saw a street scale mini grid trial launched in the Melbourne suburb of Mooroolbark. Ausnet will provide each of the 16 houses involved with a 3-4.5 kWh solar panel and a purpose built 10 kWh battery. This trial is the first of its kind in Australia to use existing homes with an aim to eventually take them off grid.[xiii] In Queensland, Ergon, partnered with SunPower is conducting a 12 month trial of combined solar and storage to 33 homes. [xiv] These trials give important insights into the expected increased use of mini grids.

A US firm ARES (Advanced Rail Energy Storage) is trialling a ‘pumped storage’ system in the Nevada dessert using rail. Trains would carry large rocks in concrete boxes up a 9km hill at an 8 per cent incline. Once at the top the concrete boxes would be stored until needed. When power is required, the trains would go back down the hill with their cargo feeding energy back into the grid as they go. The company estimates that they will be able to store 50 MW of energy to be pumped back into the grid at a rate of 12.5 MWh[xv].