This week the Clean Energy Regulator (CER) announced that it had approved enough generation capacity to meet the 33,000GWh Renewable Energy Target[i].

The CER stated that 6,400 megawatts of large-scale renewable capacity had to be built between 2017 and 2019 to generate sufficient electricity to meet the target and on 30 August, the milestone was met ahead of schedule with the approval of four large wind and solar power stations, with a combined capacity of 406 megawatts.

Last month the CER also released its annual statement on progress to meeting the 2020 target which showed that in 2018 5,000MW of renewable capacity was installed (1,500MW of small scale solar PV and 3,500MW of large-scale capacity was accredited).

It also highlighted that Australia is now leading the world in per capita deployment for renewables (see figure 1)[ii]. This was reinforced in a paper from the Australian National University that estimates that Australia’s per capita installation of renewable generation is on track to reach 250 watts per person in 2019, up from around 200 watts in 2018 (figure 2). 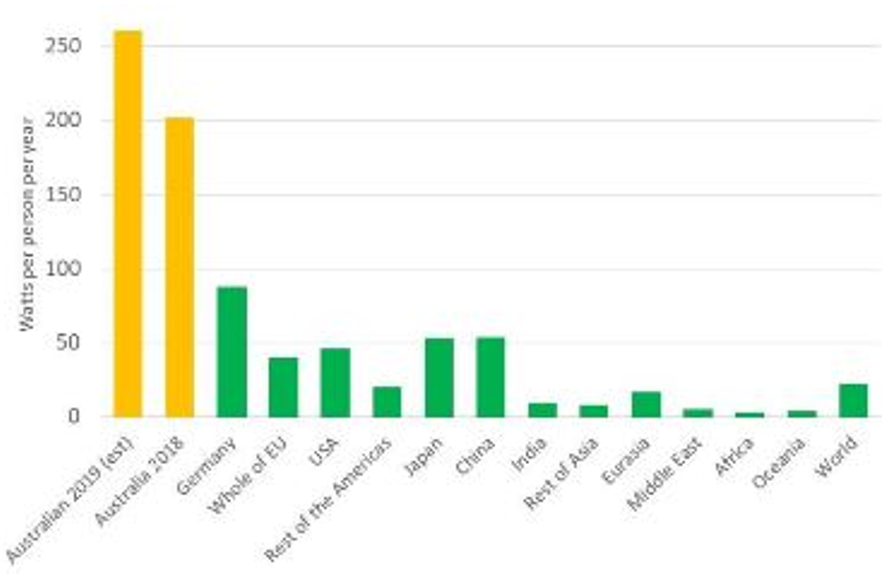 According to the Australian National University’s Matthew Stocks, Ken Baldwin and Andrew Blakers, Australia is leading the world in the installation of renewable energy capacity with per capita rates 2.5 times the next best (Germany), 4-5 times faster per capita than the European Union, Japan, the US or China and 10 times the world average[iii].

Reliability and the need to manage the influx of renewable generation will therefore be a focus for the future.  It is addressed in the Australian Energy Market Operator’s (AEMO’s) most recent Electricity Statement of Opportunities, and AEMO now has a project to investigate it, the Renewable Integration Study[iv]. But the ongoing growth in renewables is having an impact in other areas in the operation of the National Electricity Market (NEM).

For example, it is becoming more evident in wholesale market prices, most recently in states such as Queensland (due to solar) and South Australia (due to wind). The Australian Energy Market Commission’s (AEMC’s) senior economist, Oliver Nunn, recently pointed to “a new market dynamic” in Queensland with prices around the middle of the day falling to negative levels. He tracked this for five days in August (see figure 3). 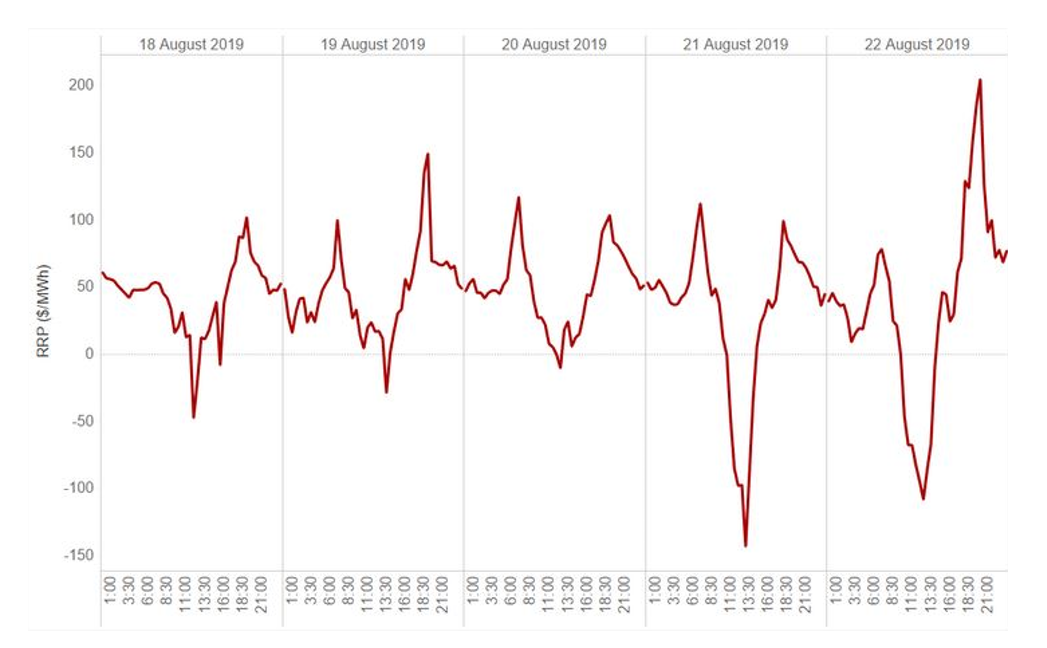 AEMO in its most recent quarterly review found that large-scale solar generation increased by 318 MW (+281 per cent) as additional capacity was brought online[v].  Most of the increase in large-scale solar output was in Queensland (195 MW, 61 per cent of the increase). Average Q2 2019 rooftop PV generation increased from 669 MW to 827 MW (+19 per cent) compared to Q2 2018.

What was described as a “collapse” in the spot price in Queensland occurred this week[vi] saw trading prices for the 30 minutes to 10am of -$413.65/MWh followed by -$711.11/MWh, according to Global-ROAM.

In his assessment of the emerging trends, the AEMC’s senior economist also considered the impact of the increased renewables on residual demand for energy in Queensland – demand less the output of all semi-scheduled generation. “The values for residual demand seen in August last week are the lowest levels since September 2002, bearing in mind that in 2002 there was no semi-scheduled generation in Queensland”.  Figure 4 shows the average, maximum and minimum residual demand for Queensland on a monthly basis going back to 2000. 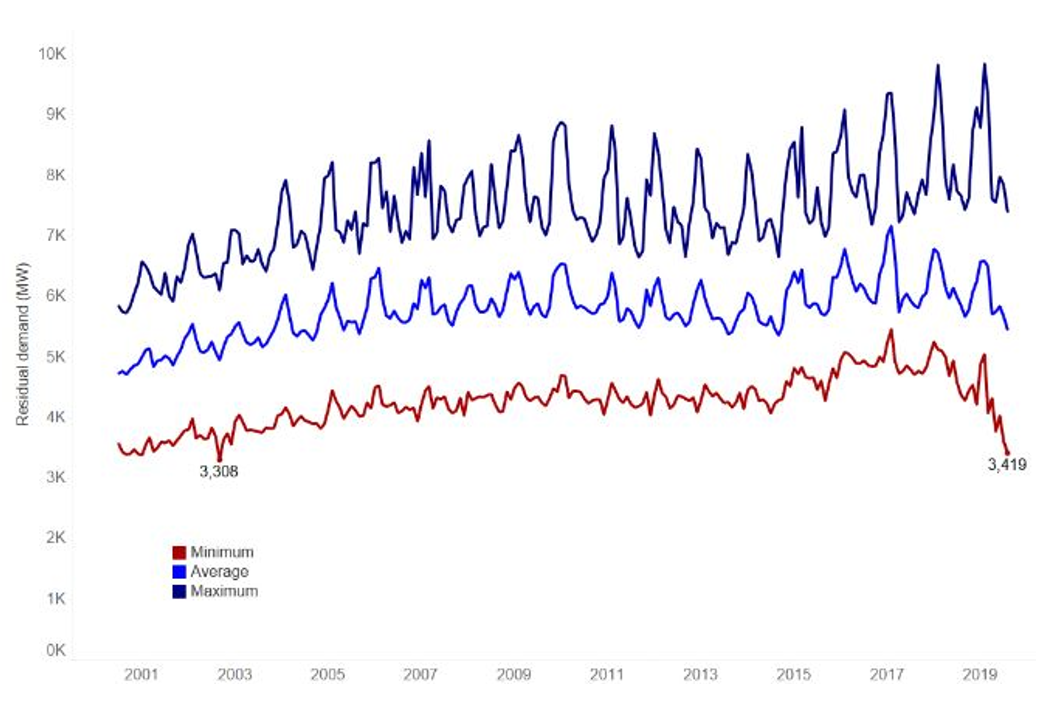 Nunn summarised the trend this way: “the negative prices seen in Queensland during the middle of the day have been accompanied by 17-year lows in residual demand. Around 3,500MW seems to be the tipping point where prices become negative in Queensland. We may be seeing the first glimpses of a new market dynamic. More small-scale solar PV and more large-scale renewables can only be expected to fuel this new trend.”

South Australia has seen a similar impact on prices but largely driven by its wind generation. The state has more than 1,800MW of wind installed. Figure 5 shows prices in SA during the same five-day period in August. 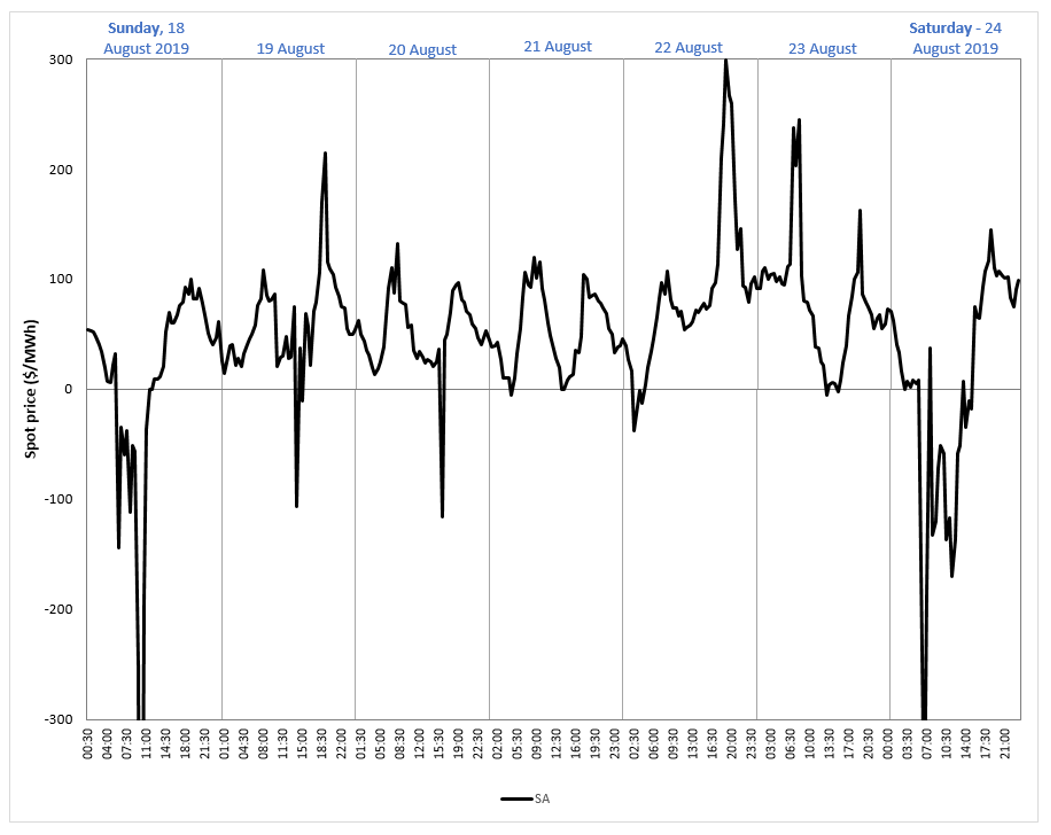 According to EnergyEdge, South Australia saw negative spot electricity prices for 9.9 per cent of the month of August[vii].

AEMO’s Q2 report noted that “in South Australia, negative prices were at comparatively high levels for the first half of 2019, with almost 53 negatively-priced hours (although still only 1.2 per cent of the time), the second highest year-to-date level on record (Figure 24). Negative prices over Q2 2019 contributed to South Australia’s average spot price being $6/MWh lower than Victoria’s.”

Figure 6 shows the incidence of negative pricing in SA. 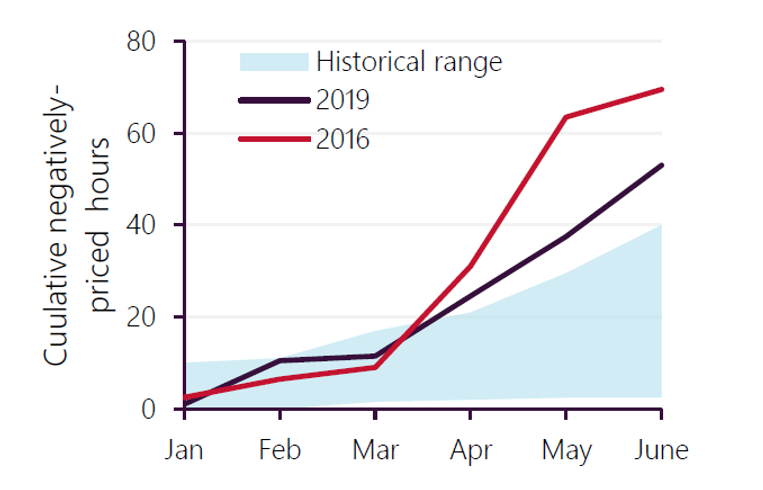 Last year wind provided 44 per cent of the state’s electricity (with gas providing 53.2 per cent, solar 2.3 per cent and the “big battery” 0.3 per cent), which is shown below. 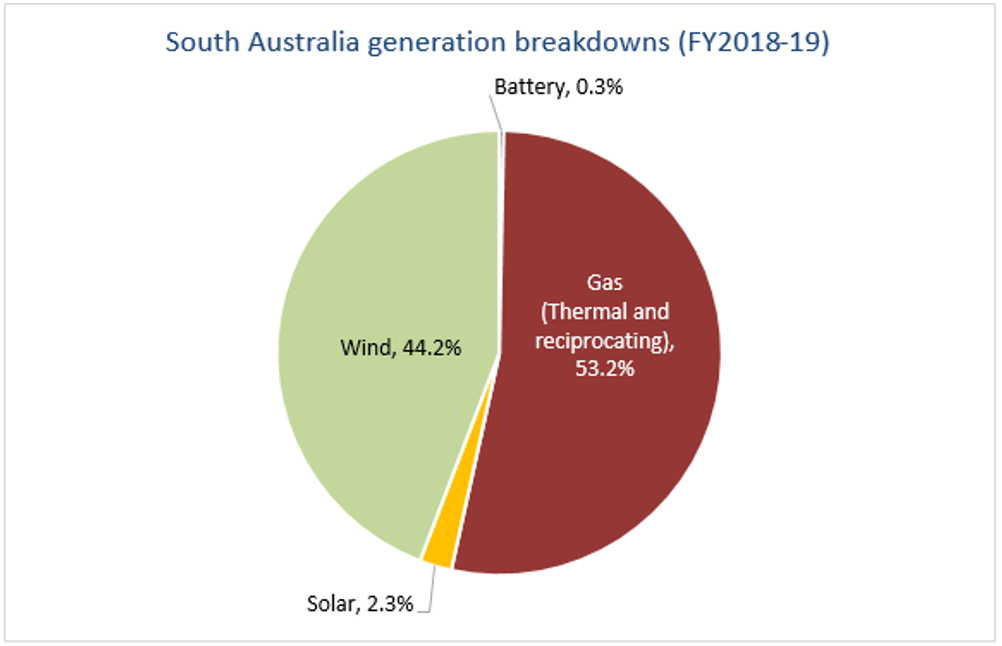 Wind farms are receiving an increasingly discounted price as can be seen in Figure 8 below, which shows that as the capacity of wind in the state has grown, so too has the discounted price it receives. 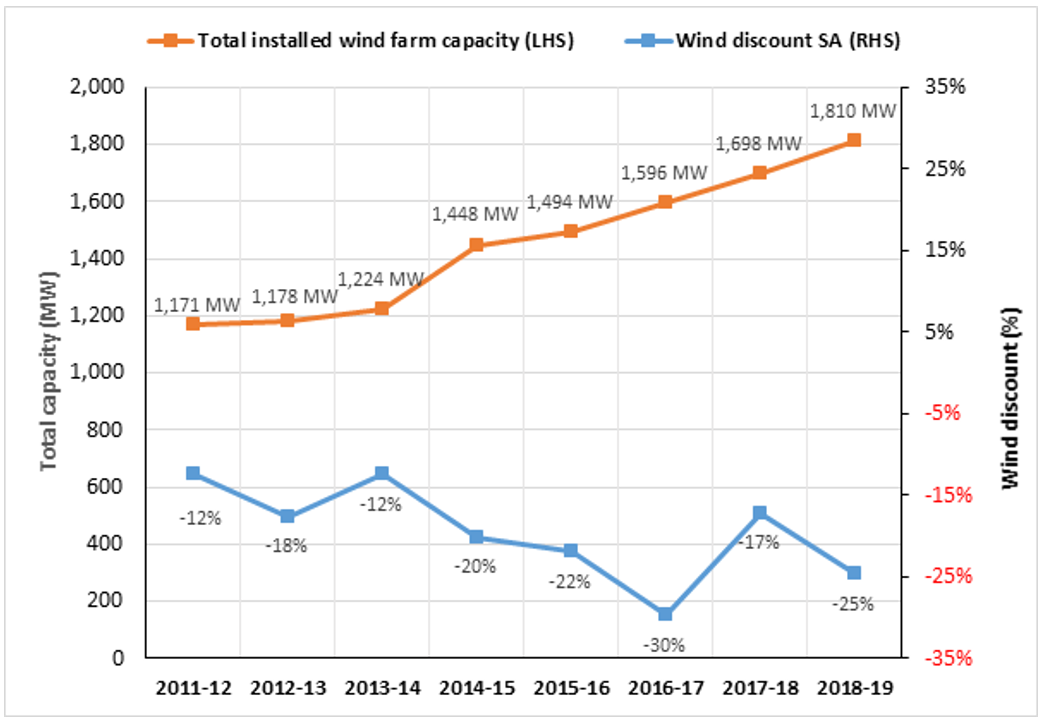 AEMO in its Q2 report also noted that South Australia set a new Q2 minimum demand record at 1330 hrs on 27 April 2019, when operational demand dropped to 749 MW (44 MW lower than the previous Q2 record last year) with rooftop solar output a factor, providing about 600MW at that time.

AEMO reported that: “the minimum demand levels in the state have been falling for almost a decade, largely driven by increasing uptake of rooftop PV in the region.  According to the CER, as at the end of June 2019, South Australia had approximately 1 gigawatt (GW) of small-scale solar capacity installed. This has driven a considerable reduction in operational demand over the middle of the day, shifting the time of minimum demand from the early morning to the middle of the day. Reduced commercial and industrial load in the region has also contributed to this trend. This shift in the time of demand is limited to South Australia at present. For other NEM regions, the overnight period remains the lowest demand part of the day” (see figure 9).

Despite the increasing number of low priced events, the average price remains high by historic levels, due to the uncertainty of variable renewable energy supply and the reliance on peaking generation to fill any shortfalls.