Global electric vehicle (EV)[i] sales reached 1.26 million in 2015, with an increase in new registrations of EVs increasing by 70 per cent between 2014 and 2015, according to the recent International Energy Agency Global EV Outlook 2016[ii]. Although the market share for EVs reached 23 per cent in Norway and nearly 10 per cent in the Netherlands in 2015, China has emerged as the leading EV market by volume.

The IEA figures come at a time when the Australian Greens have proposed a range of policies to increase the take-up of EVs locally, with the intent of getting 31,000 more electric vehicles on the road by 2021. Although sales are improving in Australia, overall EV numbers continue to remain insignificant, representing only 0.1 per cent of vehicle sales.

In a recent report, the IEA estimates that 1.26 million EVs hit the world's roads in 2015. The IEA defines the market as including plug-in hybrids (PHEVs) and battery-only electric vehicles (BEVs). This achievement highlights the significant efforts deployed jointly by governments and industry over the past ten years. In 2014, only about half of today’s EV stock existed, while in 2005, EVs were still measured in hundreds. Figure 1 shows the increase of EVs globally from 2010 to 2015.

Figure 2: Electric vehicle sales and market share in a selection of countries and regions, 2015[iv]

Australia is not covered in the current report by the IEA. Australian EV sales quadrupled in 2014, due to improved model availability, better technology and pricing choices, as well as emerging long-haul charging infrastructure, according to a report by Energeia, Shifting Gears: The Australian Electric Vehicle Market to 2030, a private report for Strategic Research Service Clients. Despite this increase, overall numbers continue to remain insignificant, with EV’s representing only 0.1 per cent of total vehicle sales in Australia. In 2015, of the 1,155,408 new vehicles sold in Australia, 1,108 were electric, the Federal Chamber of Automotive Industries’ VFacts report[v] showed[vi].

According to the IEA, ambitious targets and policy support have lowered vehicle costs and reduced consumer barriers in a number of countries. Public policies are encouraging publicly accessible charging development through direct investment and public-private partnerships. Such partnerships are occurring in urban areas and beyond, with charging networks aiming to enable long-distance travel on EVs across the European Union (EU).

The countries with the two highest market shares, Netherlands and Norway, have implemented a range of measures favouring consumers that opt for EVs. In the Netherlands, EVs receive a significant reduction on registration and circulation taxes, which is cars producing less than 88 g/km CO2 being exempt from road tax, as well as privileged access to some sections of the transport network, that other vehicles have restricted access to. Norway provides strong incentives in the form of registration, tax reductions and, for BEVs, the exemption from value-added tax (VAT), waivers on road tolls and ferries, and access to bus lanes. Below is a summary of policy mechanisms to support EV uptake, in selected countries in 2015.

Table 1: Summary of policy support mechanisms for EV uptake in place in selected countries in 2015[vii] 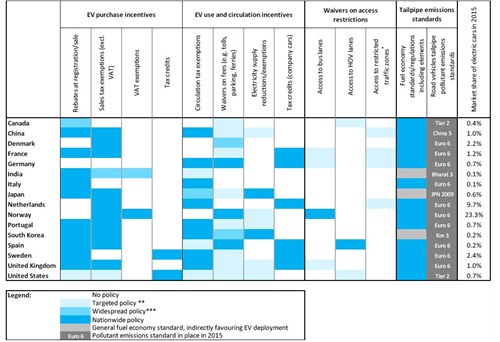 In Australia, the Greens have proposed a range of policies to increase the take-up of EVs, including five-years free registration, more public charging infrastructure, incentives for big fleets to buy EVs, and part-funding of a domestic EV industry[viii]. The Greens expect these policies would get 31,000 more EVs on the road by 2021, and 330 more charging stations[ix].

The Greens polices, however, might be difficult to implement. If these policies were to be implemented, the free registration plan, which would also cover compulsory third-party insurance, would require an agreement from state governments that administer car registration schemes. A potential way round this would be to offer a federal rebate on state costs, which would incur administrative overheads. The Greens policy would also require significant investment in charging stations in places such as carparks, which they say is pivotal to boosting sales. These polices would be costly. Further investment would be required to ensure a large portion of government fleet vehicle were electric. The policy would not apply to hybrid vehicles.

Technological developments and economies of scale are critical to move towards cost parity with conventional internal combustion engines (ICEs). Recent car manufacturer announcements suggest EV ranges will soon be exceeding 300 kilometres (km), an encouraging sign for the future. Figure 3 shows that battery costs have been cut by a factor of four since 2008.

[vi] Figures do not include Tesla